An inviting Tony Hawk clone that fails to land a full combo. 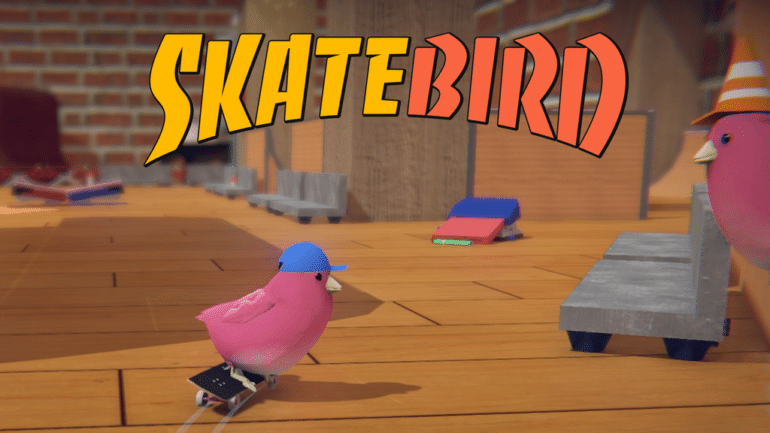 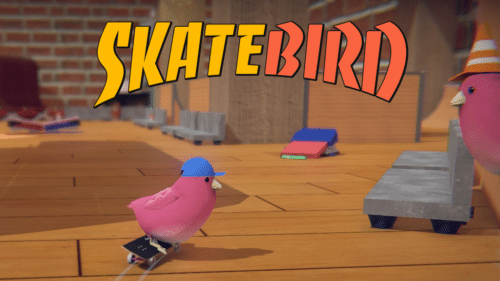 I’m a big fan of the Tony Hawk games, I grew up with them, and they will always hold a special place in my heart. There has been such a massive gap in the skating video game scene for so long, and it is only now being patched up through remakes, reimaginings, and reinventions, with Skatebird being the latest to try and get in on the action. I was excited to check out this neat concept of a game; skateboarding birds. Playing as a bird instead of the birdman, neat. Unfortunately, Skatebird has let me down immensely as nothing more than a mediocre Tony Hawk clone with a novelty concept that does more to hurt it than help it.

First things first, though, there are some really great, commendable qualities to Skatebird. Right at the start, this game has an inviting and comfortable aura to it. Skatebird is a game about doing your best and just having a good time. It’s lighthearted and also funny at times. It doesn’t pretend to be anything that it’s not; you’re a bird that can skateboard, who needs anything more? The main storyline is centered around a rad and colorful group of skateboarding feathered friends trying to cheer up their depressed Big Friend, who has been shackled to the confines of tech startups and abandoned his skateboard long ago. I loved this concept; you go skatebirds, stick it to those suits.

Skatebird has a decent soundtrack comprised of an original OST best described as “lofi bird-hop” and a selection of licensed music from smaller artists. There’s a good variety of tunes with genres like ska and skate punk here, as is expected. I also loved how the developers proudly feature the smaller artists featured in Skatebird. There’s also a nice amount of accessibility in this game. For example, you can change the game speed if things are going too fast for you and you can’t keep up. It is always great when a developer makes a game that anyone can access.

Skatebird had the makings of a fun game, but ultimately, it failed in the essential parts that it needed to be a fun game: gameplay and level design. As I played Skatebird, I became increasingly annoyed with it.

“Why was this game feeling so tricky? Why was I fighting so much with the controls?”

Somewhere along the lines of playing Skatebird, I felt like maybe there was something that I was doing wrong or something that I was missing. Was I just always bad at these Tony Hawk-style games? So I loaded up my copy of Tony Hawk’s Pro Skater 1 + 2 as a refresher; maybe I just needed to recalibrate my frame of reference. The reasons why Skatebird felt so off compared to Pro Skater were apparent within ten minutes. Skatebird just isn’t as responsive as it should be; the physics are far too floaty for this game style and are generally just too difficult to gauge and predict. There is a reason that when tasked with remastering Pro Skater 1 and 2, Vicarious Visions deliberately used the now ancient source code for the game instead of creating something close or comparable. Not getting the game feel for this genre of video game exactly right leads to a bad experience.

I can only describe Skatebird’s gameplay as skating through gravy where button presses are vague suggestions, and precision doesn’t exist. It’s like everything is delayed compared to the almost instant tricks in Pro Skater. It also takes forever to do the most basic tasks. Doing something as simple as stopping and pivoting your board to a direction you would like to skate towards is a slow process wherein your board turns about as mechanically as a clock. The controls are not snappy and not intuitive, and I found myself frustrated and fighting with them more often than not. Maybe the developers leaned too much into the floaty/flying attributes that come with being a bird to really create a good, crisp feeling experience with properly balanced weight behind.

Part of the appeal of Tony Hawk-style games is the expression of movement when you learn mastery of the controls, and this game is just sorely lacking in anything close to that. You gain speed through the “Fancy” meter, but this mechanic ended up feeling like a chore more than anything else. “Fancy” is earned by carving up and down the bottom of ramps and half-pipes. You mostly end up saying to yourself, “Well, it is time to build the ‘fancy’ meter so I can gain some air and jump a gap.” The only reliable way to build ‘Fancy’ is to be highly mechanical about it because it rarely happens organically. “Fancy” ends up stripping the arcade fun of a Tony Hawk clone from Skatebird. Physics, in general, is just inconsistent, and you lose momentum and inertia at the oddest times. Completing a spine transfer is an animation done at the press of a button, and it seemingly kills any sense of speed that you had coming out of the transfer.

Skatebird also doesn’t give you much leeway when you fail. The Tony Hawk games are so accessible because they give you a lot of room for error that you might not even notice. Sometimes in Pro Skater, you hit the ground at an off-angle and simply bounce off and keep the combo flowing, making a constantly moving experience with little downtime for your fingers. You are constantly engaged in a Tony Hawk game, but in Skatebird, there is very little room for error comparatively, and bailing is a constant torment. The downtime plagues the experience.

A big part of why this game also feels bad to play is its disjointed map design. Map sections felt more like instanced skating areas where you can do one or two things to boost your combo chains but then don’t flow into the greater design of the world. Bowls, ramps, gaps are all presented a la carte, rarely flowing into one another; it’s awkward to play. Most missions based on collecting X amount of collectibles are super simple and require you to just grind around a bowl to accomplish the task because the game is so limited in its map design.

Admittedly, the maps are imaginative; it’s fun to skate along with a greasy pizza box and then dunk yourself into a flaming basketball hoop afterward, but it’s mostly novelty that starts wearing thin after the first hour or so of gameplay.

Lastly, I have severe issues with the depth of field in this game. I usually like depth of field; the cliche overly cinematic look doesn’t bother me. But Skatebird goes way overboard with it, and in a video game based entirely on being aware of what is around you, it is out of place. The depth of field is so bad that it’s like driving down a highway with vaseline smeared across the windshield. Sometimes I couldn’t tell if I was approaching a slight bump in the ground geometry that I could ollie off of or if it was just a ground texture I could ignore. The most challenging part of finding the game’s various collectibles was trying to physically see them through the depth of field, and you can’t tell if you’re approaching a mixtape, an article of clothing, or a new deck until you’re right on top of it.

Skatebird had potential, and I hate to drag it down, but I simply did not have an enjoyable experience with it. That’s not to say there aren’t bright spots here and there, such as the cute story, inviting feeling, and some fun bird customization. Not to mention the easy to pick up and play nature of Skatebird, which is great for kids and Nintendo Switch owners. However, once the novelty of being a skateboarding bird fades away, there’s really not much left to the game except some frustrating mechanics, disjointed map design, and an at best mediocre Tony Hawk clone. 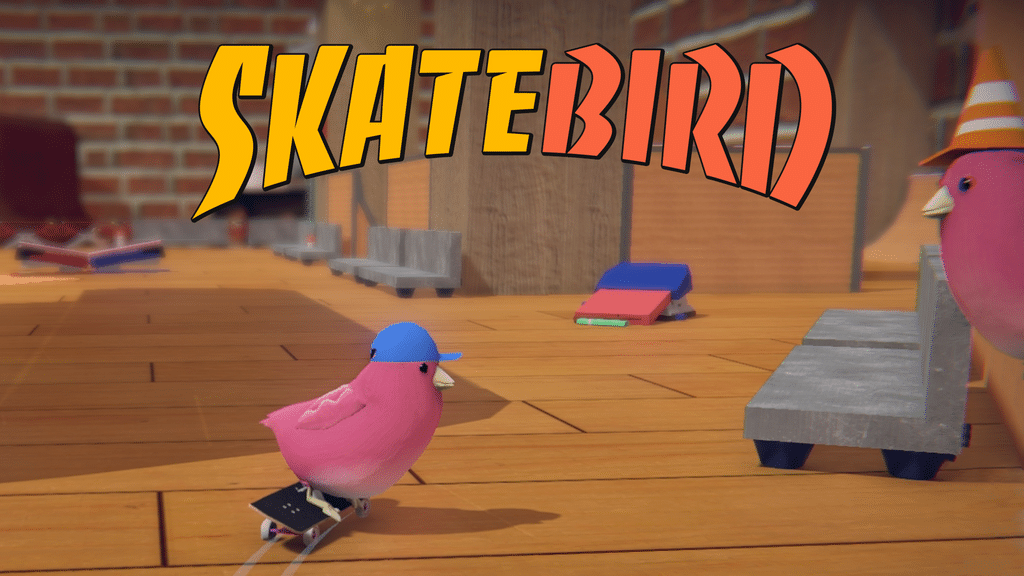 Skatebird – Review
Score Definition
You’ll be left out with a “meh” after finishing the game. What game did we just play?
Pros
Light-hearted and funny
Suitable as a pick-up and play title for short bursts
Nice story with some heartwarming themes
Fun customization
Cons
Depth of field is too thick and distracting
Play areas never flow; feel more like instanced skating areas than a nice flowing map
Always fighting with the controls
Physics are all over the place and never felt very consistent
4
Below Average