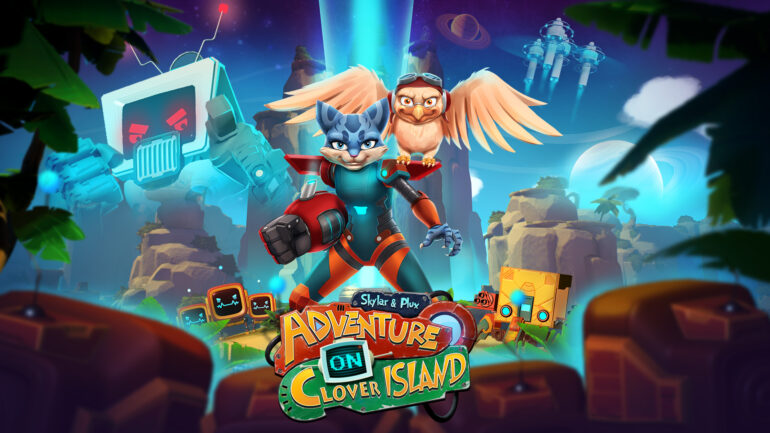 The last 3D platformer adventure I reviewed was Yooka-Laylee – it was a great game. Dynamic duos are a big thing now in gaming, especially in platformers. Having your own companion while you make your way to the lands of mystery lessens that loneliness. Then again, when your partner tends to do nothing useful aside from blabbing too much at your major enemy can be bothersome. Skylar and Plux fail what a dynamic duo truly means.

I expected too much from Right Nice Games’ Skylar & Plux: Adventure on Clover Island. 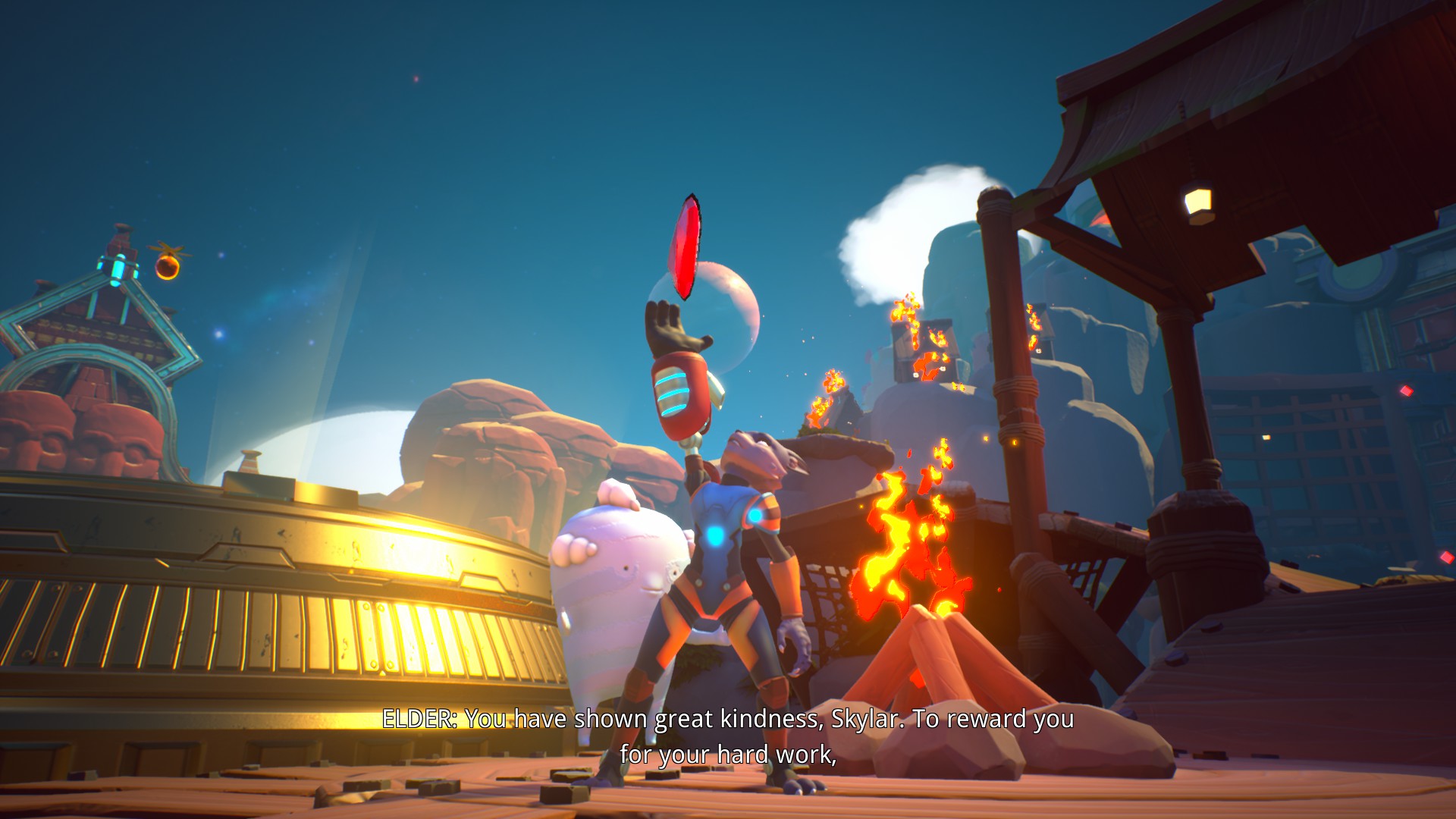 Skylar & Plux is just your typical 3D platformer that doesn’t do much aside from… platforming. That’s where the game actually got everything right. Since I’ve been playing platformers for a while now in the start of 2017, character development is also something I look for apart from mind-boggling puzzles and decent pacing. Skylar, your feline heroine, doesn’t speak. In the entire game, she has never spoken a single word. In the first few minutes of my playthrough, I thought in the endgame, or even midway, I will be able to hear her voice and her story. Sadly, that wasn’t the case. She’s just… Skylar.

You also have your feathery companion, Plux (who literally doesn’t do anything), who loves to harass the evil computer monitor, CRT. Both Skylar and Plux would have been great and lovable characters, but with the lack of Skylar’s voice and the characters’ history, the duo suffers from the lack of character development. Unlike other pairs like Ratchet and Clank, Jak and Daxter, and even Yooka and Laylee have intriguing characteristics and personalities. It’s so disappointing to see that a Ratchet & Clank inspired title like Skylar & Plux fall flat in this section.

I’ve noticed that 3D platformers come short in terms of narrative, I find Jak and Daxter and Ratchet & Clank’s story well-written, but Skylar & Plux falls in the pool with Yooka-Laylee and other platformers. Your task is to save Clover Island from getting abolished by the evil CRT. He has stolen the so-called circular Fuses that powers the Siphon, an ancient Progenitor machine. In your journey to stop CRT, you get to save the natives, the Lo’a, who are caged up by CRT’s little CRT minions. By doing so, you will be able to boost your life by one every after saving a specific number of Lo’as. And by saving the natives, you must gather these golden crystals that are laying around the whole island and by also destroying crates and vases.

I did expect some upgrades and other abilities to learn. Unfortunately, the game didn’t. It’s useless to have these crystals to pop out repeatedly once you leave and enter the same location since the primary use is to set the Lo’as free and to refill a bit of your lifebar, nothing more.  In my opinion, it’s a missed opportunity by Right Nice Games and unrewarding in Skylar & Plux. There is nothing to encourage you for smashing those crates and getting crystals once you’ve rescued all Lo’as. Unless if you just want to break stuff, then be my guest.

Games evolve as well as its genres. The worlds that 3D platformers give us are slowly getting bigger and bigger. There are so many places to discover and locations to traverse. Clover Island is a mix of both Yooka-Laylee’s first world, Tribalstack Tropics, and Ratchet & Clank’s futuristic-metal installations. I loved how Skylar & Plux didn’t try hard to clone the mentioned titles. 3 locations with unique environments are separated by huge walls. Forlorn Desert is the place where everything becomes fun. There are pillars you can activate that time shifts a certain area within its radius to solve some puzzles. The platforming and puzzles in this dune desert and ruins are entertaining.

As I’ve mentioned, platforming in Skylar & Plux is well-crafted. It’s not innovative, not state-of-the-art, it’s your classic 3D platformer like last month’s release, Yooka-Laylee. Puzzles are not challenging as I expected, it looks like Right Nice Games wants to have their first-ever title to be kid-friendly. All puzzles that are laid out in-front of me are simple. It’s not a positive remark, I tell you. But, even with these simple puzzles, platforming is something I really adore in Skylar & Plux. In the Forlorn Desert area, you get to unlock the ability to slow time. There are spinning floating platforms, and slowing time is the best and only way to move forward. It kinda reminds me the fun of Titanfall 2’s ‘Effect and Cause’ level where you have to do time-shifts to jump over a different platform.

Combat feels somewhat repetitive, but not all the time. It’s enjoyable when you get to carry a big metal ball with Skylar’s magnetic arm and hit enemies with it. Overpowered as it may seem, the CRT minions, turrets, and rocket-launching machines are not intimidating as I thought they would be. There is no difficulty destroying them, and the horrible AI makes them mindless little scraps who follows you while platforming and fall to their doom. Right Nice Games managed to improve the camera flow in Skylar & Plux. Unlike Yooka-Laylee where you have to battle against the camera movement, Skylar & Plux’s camera system isn’t forceful. The motion is smooth and jumping from one moving platform to another is not a struggle. 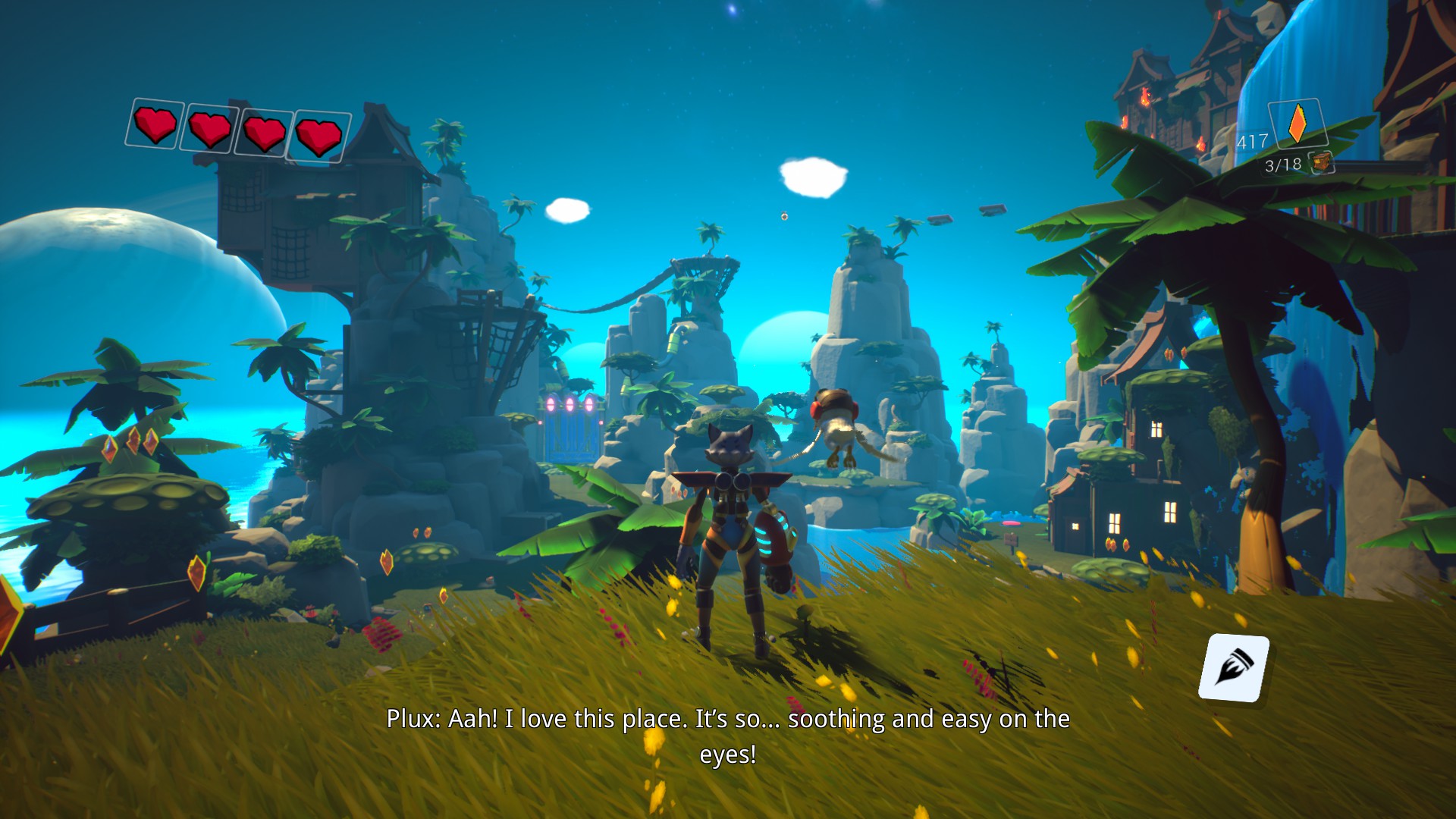 Skylar & Plux is surprisingly stable on PC. With the grass and tree movements by the winds, it’s a well optimized title. However, there are only a few dips on frame-rates but it’s not something that would ruin your experience. It’s also surprisingly short. The game’s duration was only 2 hours and 37 minutes long – that’s with 24 Lo’as saved out of 51. Once you’ve completed the game, there’s nothing much to do aside from rescuing all Lo’as.

Even if I wanted to love Skylar & Plux: Adventure on Clover Island, I would be lying to myself and my dog. I expected more from Right Nice Games’ 3D platformer as I’ve began to love this genre, but it seems that my standards are getting higher and higher when it comes to these types of games now.

Skylar & Plux misses a lot of great opportunities that would have made the game great and appeal to most platformer lovers out there, but I do recognize the effort of Right Nice Games for this decent 3D platformer.