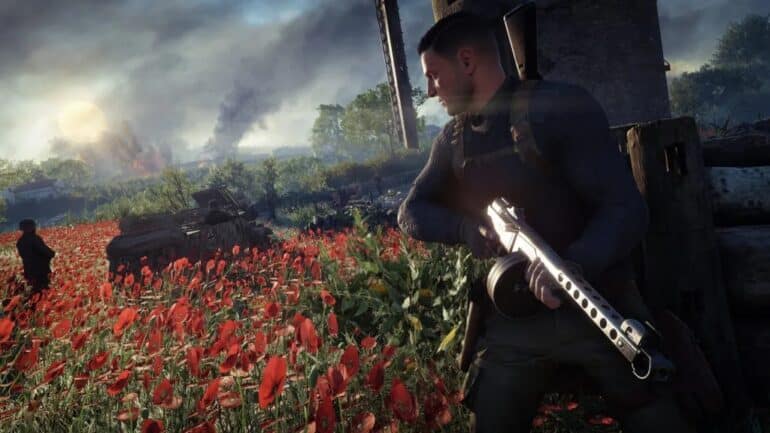 The new Landing Force Mission and Weapon Pack now forms the first content drop for Season pass One and also available to purchase separately. The Flooded Village multiplayer map is playable now on all multiplayer modes for free. This also includes the No Cross.

A new trailer has also been released which showcases the content in the Landing Force Mission and Weapon Pack. It also shows the Flooded Village as well.

The new Landing Force mission is developed by Rebellion in partnership with Flix Interactive. This mission is inspired by the movie The Guns of Navarone, which is set on an island off the coast Southern France, the Nazis have installed a huge gun battery into the mountainside, which is giving a hard time for the Allies from invading the South of France.

The protagonist, Karl Fairburne, has now one job to complete, which is to destroy those huge weapons. He must do this stealthily as possible before he could signal the Allies to safely start Operation Dragoon. This island offers players to explore the different buildings, scenery and landscapes.

The new Weapon Pack includes the D.L. Carbine rifle and PPSH submachine gun. The prior is one of the quietest weapons to have been created at that time, which makes it the perfect addition to the arsenal as it can kill a target with the smallest noise. The latter weapon, on the other hand, is hugely opposite as it can fire off a lot of rounds at a super fast rate. It makes it the best gun to use just in case things goes wrong.

Buy the Season Pass One to get both The Land Force Mission and Weapon Pack for only $34.99 or buy it individually for $14.99. There are three more content drops to expect soon.

Flooded Village is free to all players and a new multiplayer map that is inspired from images of Normandy during the events of D-Day as the Nazis opened locks and breached flood defenses in order to keep the Allied Forces distracted and blocked from entering the area. It features a lot of vantage points best for sniping, lowlands, flooded houses, a railway bridge, and a causeway. This new map offers a unique challenge for team-based and solo multiplayer.

The P.1938 Suppressed Pistol, which was supposed to be available only as a pre-order bonus, can now be bought for only $3.99.