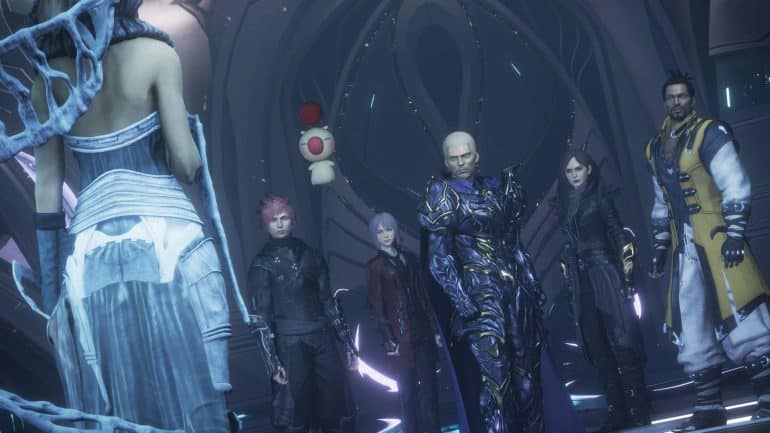 The next and final DLC for Stranger of Paradise Final Fantasy Origin has been revealed and it is called Different Future. A release date was also announced, which is on January 27, 2023. Jack and his party members will be meeting one of the many mascots of the Final Fantasy franchise, a Moogle.

The next part will be spoilers. You have been warned.

After the events of the Wanderer of the Rift DLC, Jack Garland and the rest of the crew encounter a strange being that claims to be from the future. It calls itself a Moogle and explains that they have come back to the past to prevent a certain individual from its wrongdoings. This person is trying to delete this particular timeline for their own “justice” which would in turn delete the future that the Moogle comes from. It seems this villain is a Lufenian.

According to a Wikipedia, the Lufenians were an ancient race that went to war with the humans of Cornelia before suddenly disappearing. They went into another dimension where they created an ideal world. Jack was the one who defeated them to stop the time loops and finally left their world alone.

It seems one Lufenian has come back and is trying to disturb the balance once again by using time.

The trailer also seems to reveal new content like the new armor that Jack Garland wears, which is the Garland suit. There are also guns introduced, which means there could be new weapons. Lastly, the character that got teased at the end seemed very familiar. He seems to be the great Emperor Mateus from Final Fantasy II, which means there is going to be a crossover event.

Stranger of Paradise Final Fantasy Origin is out now on PC, PS4, PS5, Xbox One, and Xbox Series X/S. The Different Future DLC launches on January 27, 2023 across all platforms.