Legends speak of a Savior, destined to save the world of Al-Warth. Until the Savior arrives to contest him, the Evil Doakdar continues to take over the lands by force. The free peoples of Al-Warth will soon succumb to his robot army unless something is done. The dragon travels between the worlds in search of the chosen hero. A faint hope is all that stands in the way of Doakdar and dominion over all the lands. 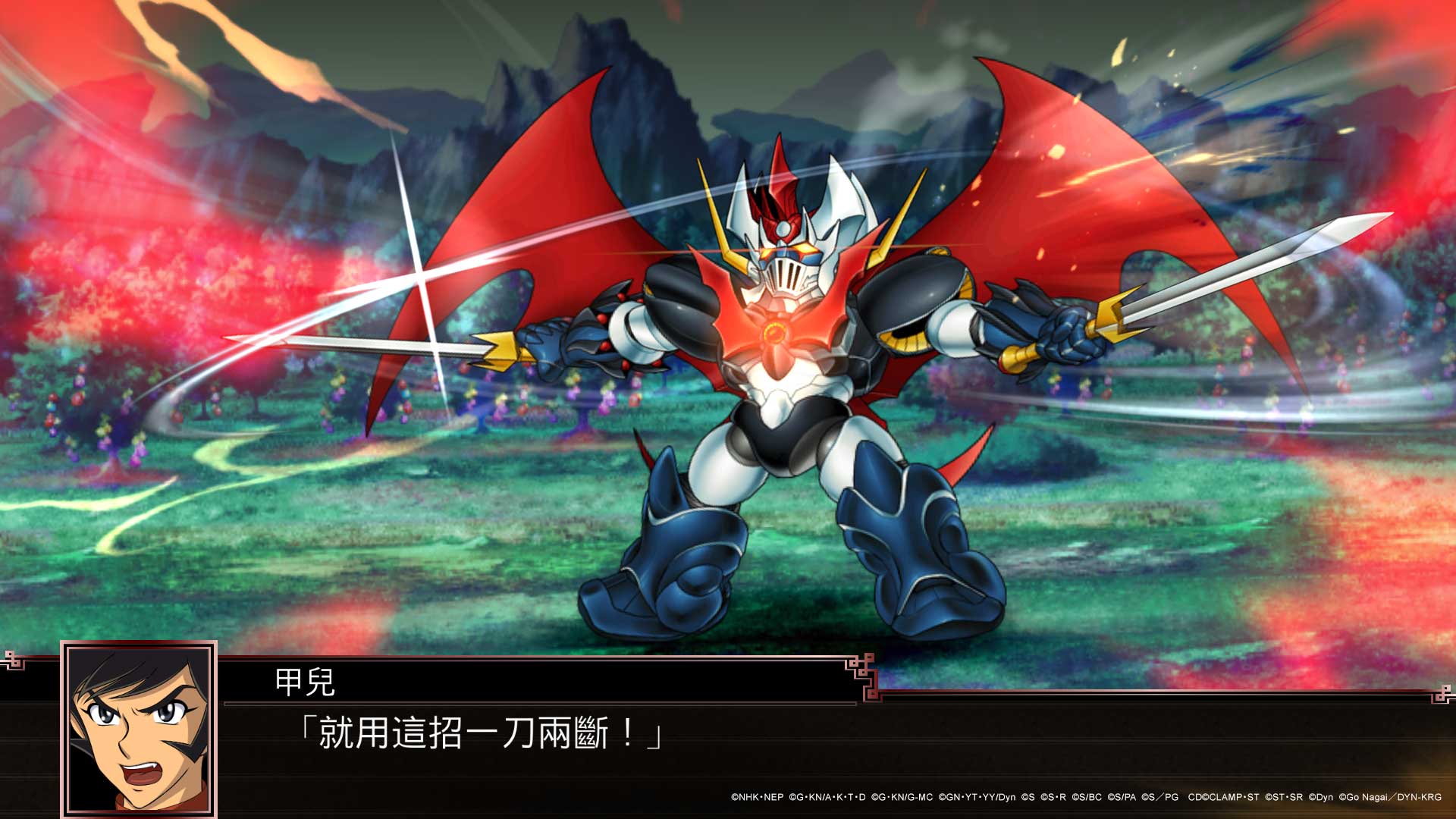 Super Robot Wars X is a strategy role-playing game that is essentially a mash-up of several popular mecha titles. The story revolves around a ragtag group of offworlders and their Al-Warth allies. Together, they must bring down the evil Doakdar and his off-world allies with the hope of returning back to each of their respected worlds. Players take on the role of the Savior’s guardian. It is your job to guide the Savior throughout his journey to figure out a way to save Al-Warth. All the while, dealing with the various issues the offworlders brought with them from their worlds.

While primarily a strategy role-playing game, Super Robot Wars X does contain some elements of visual novels. Its main purpose is to tell the story and give a little insight to each character. Through these scenes, we get to know each characters’ motivations and struggles throughout the game. In my opinion, the writers did a fine job with each character. The ones I am familiar with act closely to the originals of their respected series. The story is pretty much standard fare – heroes coming together from a different world, trying to beat some ultimate evil. It doesn’t take away anything from the game especially when the game series has a storied history of mashing up a lot of mecha series.

Battles in Super Robot Wars are turn-based on a grid in which the player moves their units around. When he or she is done, the AI takes its turn and move its units around. Each unit has a certain range for each attack. If you’ve played games such as Final Fantasy Tactics or Advance Wars, the combat is fairly similar. In most battles, the player must destroy all units or a boss unit in order to win. Additionally, there are SR point win conditions that appear in each map. These add a new level of challenge to the game, and are fun to do. Fulfilling the conditions will result in bonus SR points, which will come in handy when it comes to upgrading units.

After each battle, the player returns to the Intermission screen to upgrade and customize their units. The game is gracious enough to start you off with a small number of units to work with. By mid-game, the number of mechs you have in service will be counted by the pages. The game makes it very clear to improve the stats that the mech is already good at as trying to level up all stats equally will result in a sub-par fighter. Additional options open up the further along you are in the story. The options are straightforward enough that anyone who has ever played an RPG will understand right away what needs to be done. 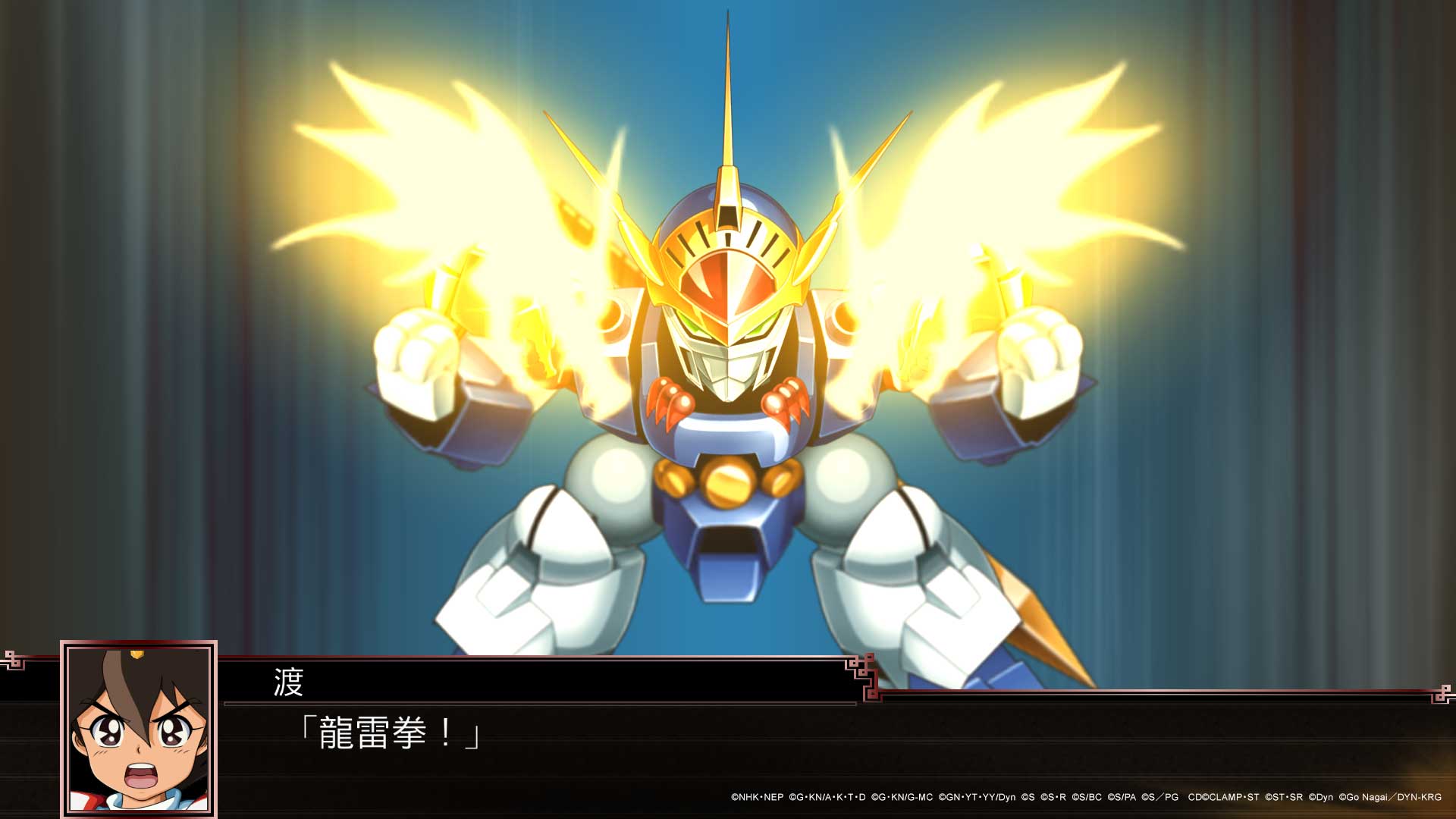 Combat is this game is pretty straightforward. Attack the units you have a good chance of landing a hit. Avoid the ones that have a large chance of countering your attack, which is almost always a boss unit. Activating special skills can help out on that front as boss units have enough power to kill your units outright. Figuring out the best stats is key in this game. You almost have to feel out the best way to improve each mech. It’s very satisfying to build up a unit that can literally own the battlefield by itself.

The game incorporates a lot of mecha series. Any fans of the mecha genre will instantly recognize more than a few of them. The rest will probably pique your curiosity and make you want to watch their series. I admit, there were some that I was not familiar with. And because of this game, I felt the need to check them out and see what they’re all about. The sprite work of each mecha is hands down awe-inspiring. Seeing the battle animations for the nth time doesn’t get tiring for me. Of course, skipping the animations is entirely possible (and, at some point, necessary) to save time. Which is a very welcome feature. You can turn them on again just as easily if you’re up to it. The accompanying music is also top notch. Hearing the themes of each series in instrumentals was a joy in and of itself.

At the beginning of the game, players have the opportunity to name either a male or female avatar. Your selected avatar has a story all their own and will affect the overall story in some shape or form. The game also has a branching path that gives it even more replayability. It’s certainly worth another playthrough just to see how other branch played out.

If there’s anything that would hold the game back from reaching a perfect score would be because of the vast amounts of terminology you have to be familiar with. The game gives out a lot of useful tips, but the actual task of knowing each and every term is left to the discretion of the player. The game is pretty scarce when it comes to information about status ailments and unique attributes. And let me tell you right now, it gets a bit annoying to keep opening up the definitions tab every single time a new keyword pops up out of nowhere.

As with any crossover event, the amount of time each character gets in the spotlight is pretty limited. With such a huge cast of characters, not everyone can get an ample amount of screen time. Each chapter focuses on a group of specific characters. Everyone has their moments, but some get theirs sooner than others. It’s both a good and bad thing that most characters have some lines here and there. That’s just how crossovers work, in general. It’s tough being the main character in a sea of main characters. 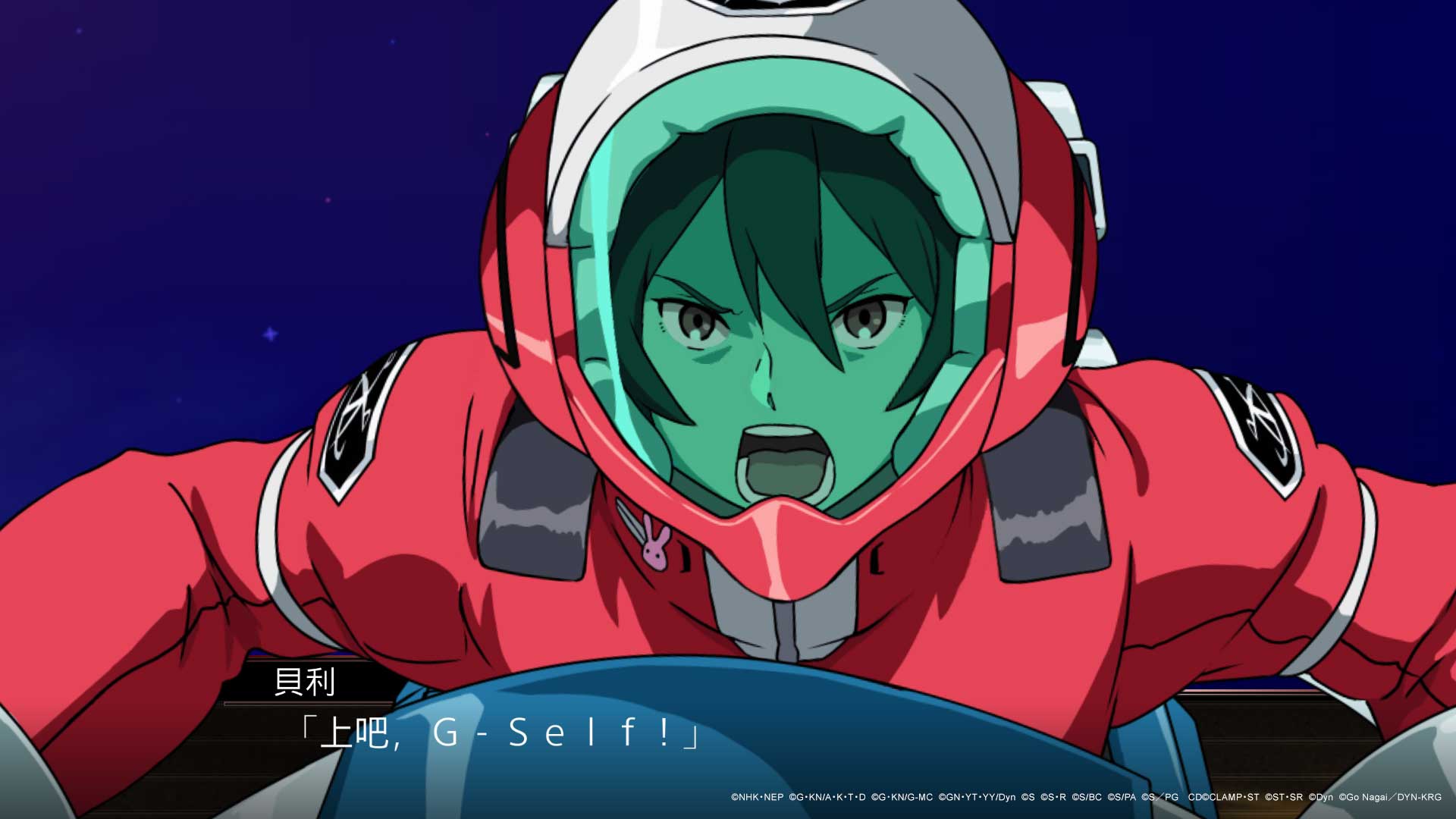 This might be one of the best games the series has ever produced. The combat is very straightforward and rewarding. The game is a great introduction for new players to both the series and genre. It’s still going to take some time to finish. And yet, you still might have enough to experiment with for another playthrough. For its solid execution of both gameplay and story. I highly recommend this game for both beginners and mecha fans. Fans looking for challenging gameplay might give this game a pass, but please give it a try regardless. 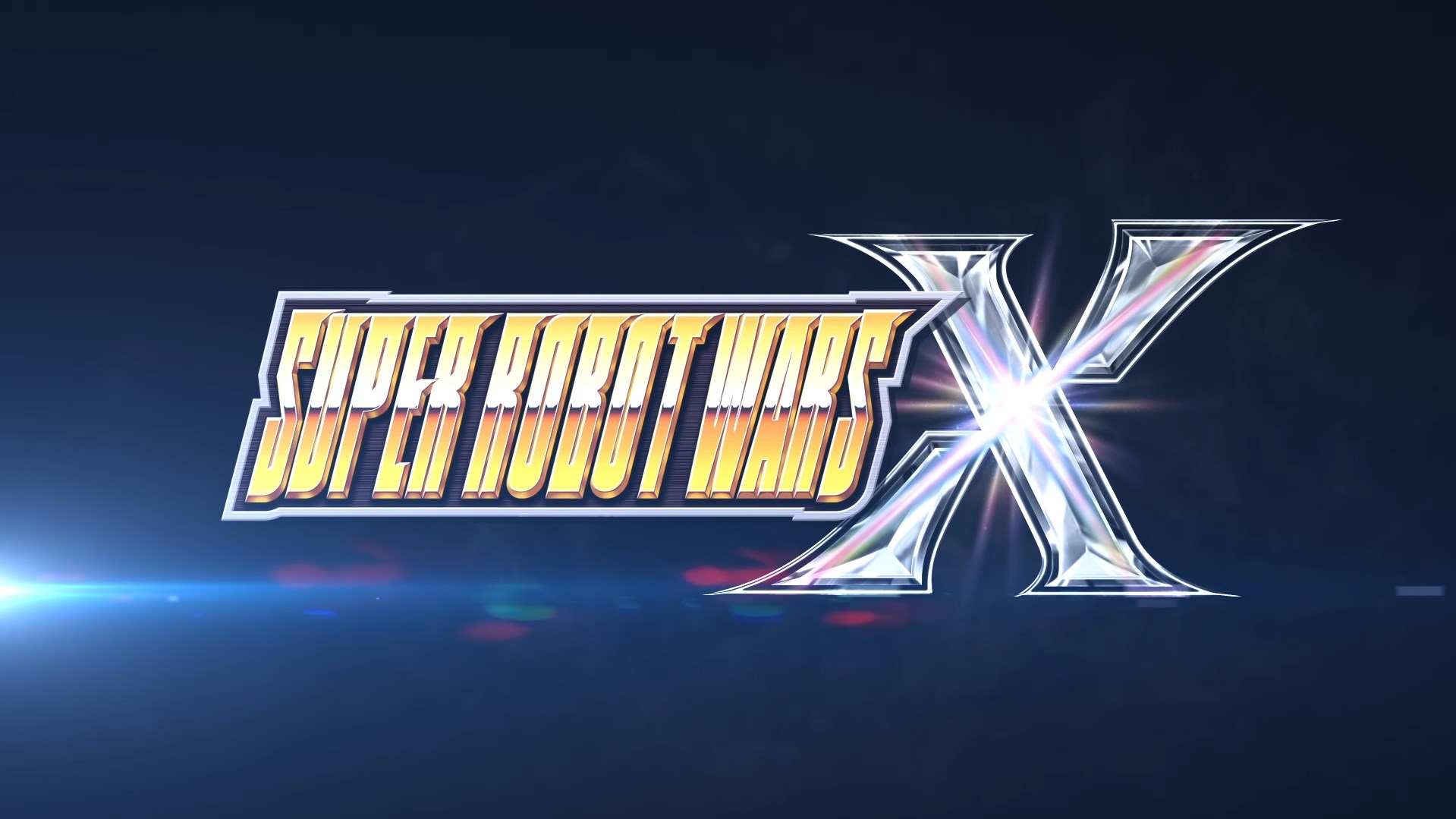 Super Robot Wars X - Review
Score Definition
May it be the likes of Shadow of the Colossus or Metal Gear Solid, if it’s quite there but not enough to push the boundaries, it’s still an awesome game.
Pros
The execution of the crossover itself was spot on
Offers plenty of hours of gameplay
Beginner friendly
Amazing sprite work
Cons
Some characters have more screen time than others
A lot of terminology
Might be too easy for those looking for a challenge
9
Excellent