Tales of Arise Boss Guide: How to Defeat Vholran

This boss guide will show walk you through in defeating Vholran on Tales of Arise. 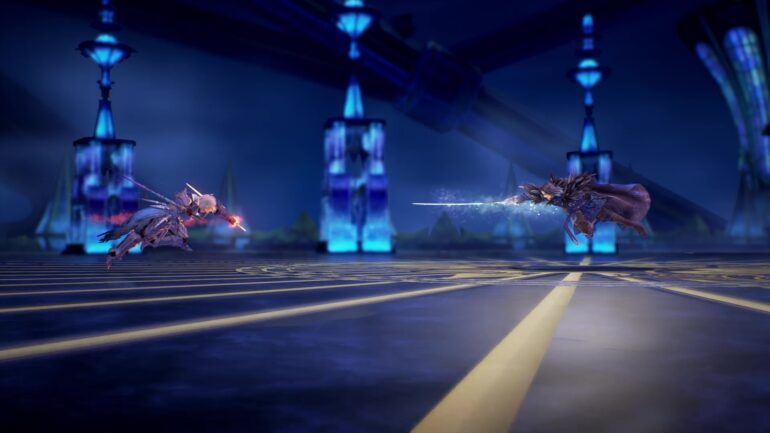 How to Defeat Vholran in Tales of Arise

This guide is for when you meet and fight Vholran in Ganath Haros. This fight is essentially your ultimate encounter with him and by far the most difficult.

Defeating Vholran can be done by keeping in mind three things: First, keep your CP up. It is vital that you have enough CP throughout the fight to allow Dohalim and Shionne to heal the rest of the party. On that note, the next thing you should keep in mind is to have both of them at the party. The fourth member is completely up to you. Finally, don’t be afraid to fight Vholran head-on. This boss is agile and you’re going to need to match his pace.

Fighting Vholran seems very overwhelming. He hits hard and he is as slippery as an eel. You can make the boss fight much more doable by knowing his movesets. Here are some of the attacks he uses the most and how you can use them to your advantage:

Sword Combo 1 – This is Vholran’s main and most common attack. He does a forward step and follows it with a string of attacks using his sword that lasts for about 3 to 4 seconds. He usually ends the combo with a powerful water-imbued strike. The best way of avoiding this is to simply run away from him and wait for the combo to end. However, the better approach is to trigger a Perfect Evade by dodging at the correct moment so you can land a powerful counterattack on him.

Sword Combo 2 – Initiated by a forward lunge attack with his sword. This combo is about a second or two shorter than the previous one. The same tactic from before can be employed here.

Rising Combo – A variation of his sword combo attack, only he rises higher and higher in the air as the combo progresses. Employ the same tactic listed above.

Spinning Attack – Vholran does a swift and powerful spin attack. This move is very difficult to counter because of how extremely quickly Vholran does it. As soon as you see Vholran spinning, immediately tap the dodge button and hope for Perfect Evade to trigger. There are various variations to the spin attack, like one where he turns his body sidewards, giving the spin a vertical reach. Use the same tactic mentioned earlier to counter this.

Water Orbs – You can tell Vholran is about to perform this attack when his body glows blue and he draws his arm across his body. He will fire two water orbs at you. Keep running to the left or to the right to avoid his orbs.

Ice Spikes – Vholran slams the ground with his sword and summons spikes of ice to rise upward. You will have a second to react and get away from this attack before it can reach your hitbox, so be sure to dodge immediately as soon as you see the ice formulating.

Mystic Arte – Like you, Vholran also has a unique Mystic Arte attack. When he activates his, he summons a maximum of three water sprouts that stay up for about 15 seconds. Avoid the sprouts while fighting him. You can also trigger a Perfect Evade by dodging at the right moment just before a sprout hits you.

Finis Aeternam – Vholran’s Mystic Arte during his second phase summons a gigantic sword of ice from the sky, descending slowly to the ground. While the ice itself takes a while to drop, allowing you to move away from it easily, the attack also freezes the ground as soon as it penetrates it. It also summons a handful of spikes to rise up from beneath all around the arena. You can usually see the summoning of the spikes slowly creep up towards you. Before it reaches the ground you’re standing on, jump and dodge away to avoid being damaged.

Lightning Ground Strike – This is when Vholran runs to you and thrusts his sword to the ground, permeating lighting around him and causing a current on the ground that streams forward. Simply dodge away just as his sword reaches the ground to avoid being damaged. You can also halt his run by using Kisara’s Boost Attack.

Ignite Terror – This is a spell Vholran uses. If done without interruption, Vholran will fire a laser of darkness across him that deals massive damage. You can interrupt this spell from charging up by using Rinwell’s Boost Attack.

Upgraded Ice Spikes Attack – Vholran slashes his sword upwards and summons spikes of ice to rise up from the ground across him. Unlike the spikes attack during the first phase, this one has a longer area of effect that spans across him. Be sure to move to the side to avoid the spikes.

Bigger Ice Spikes – This attack spans the entirety of the arena. It functions very similarly to the ending of the Finis Aeternam attack. Whenever the ground starts to freeze up, observe Vholran and wait for him to summon the spikes. The spikes will begin to rise up after he jumps and spins forward. When he does this, run or evade to the side.

Ice Meteor – Vholran will also occasionally summon a massive block of ice from the sky and slams it towards his location. The ground around Vholran will glow just before the ice lands. This will let you know exactly when to move away to avoid being damaged.

Techniques to Keep in Mind to Defeat Vholran

Perfect Evade – Performing a Perfect Evade is the best strategy you can use while fighting Vholran. Whenever he does any of his Sword Combos, you can trigger a Perfect Evade and follow it up with a counterattack, and repeat the process again for as long as his combo is still initiating.

Be mindful of his attacks and overwhelm him with your Astral Artes. Don’t be afraid of being damaged occasionally. That’s what the CP is for. It is also beneficial that you stock up on healing and CP recovery items before the fight to make your ordeal much easier. That said, have fun and good luck! If you’re having a hard time now, just take note of everything above and you should be able to defeat Vholran in no time.

Here is another boss guide you might want to check out: How to defeat the Mantis in Tales of Arise.