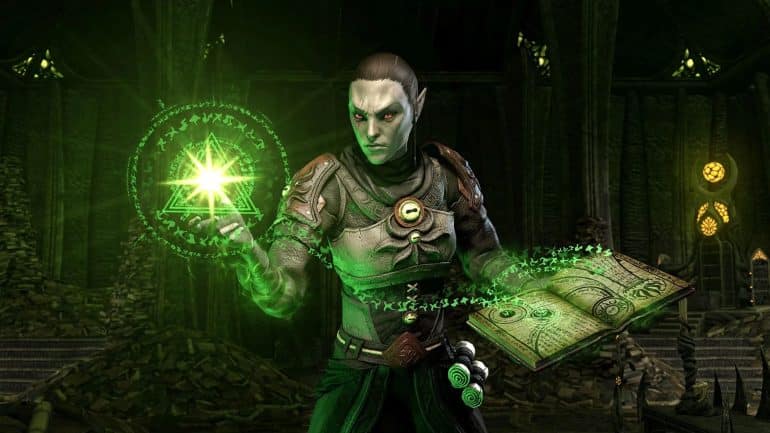 Bethesda has recently announced The Elder Scrolls Online Necrom during the Developer_Direct Showcase. They also revealed a new class called the Arcanist.

According to the studio, the upcoming new expansion, ESO Necrom will launch on June 20, 2023 on Xbox consoles. It will introduce a new class, zones, and storyline for the players who have stayed with the game for so long.

The Arcanist has three new skill lines to master: the Herald of the Tome, Curative Runeforms, and Apocryphal Soldier. Each new skill line draws from Oblivion to heal deal damage, support allies, and absorb punishment. Players can summon Runeblades which will launch Oblivion-powered projectiles at enemies. The Apocryphal Gate summons a portal to assist the party’s mobility.

The Crux system allows the Arcanist to select abilities to generate a new resource called the Crux that can be spent to empower other abilities.

Necrom will add two new zones to explore. The Telvannia Peninsula is located along the eastern coast of mainland Morrowind which is home to the mysterious mages of House Telvanni and the great city of Necrom.

Apocrypha is another zone that is Hermaeus Mora’s realm of Oblivion. It houses the Endless Library and some other strange locations worthy of exploration.

Each zone will have its own quests, NPCs, challenges, and rewards like new achievements, titles, item sets, collectibles, and more. Two new companions will be introduced too: the Redguard Arcanist Azandar Al-Cybiades and Argonian Warden Sharp-as-Night.

Players can now pre-purchase Necrom today which will launch on June 20, 2023 on Xbox One and Xbox Series X/S. Get it now to get unique bonus rewards at launch and immediate access to the Sadrith Mora Spore Steed mount and Sadrith Mora Spore Pony pet.