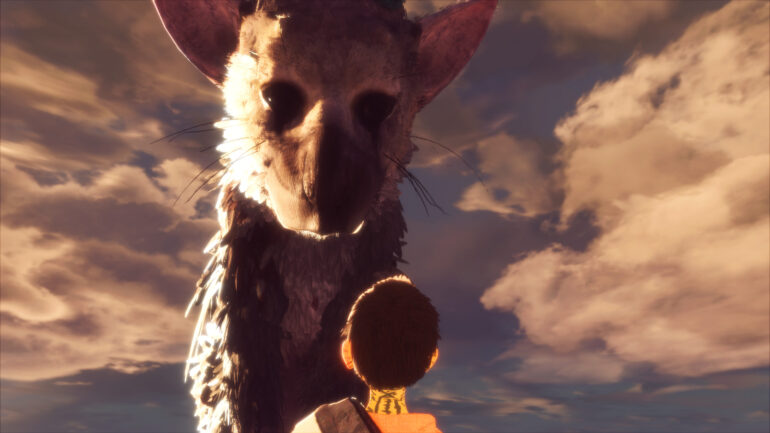 The time has finally come! The Last Guardian has been dormant and delayed for 5 years, and has arrived from its development struggles and internal issues. The adventures of the boy and Trico was supposed to be released early 2011, but Sony’s decision to push the game’s release date 5 years after was apparently due to its slow overall performance running on the PlayStation 3.

The Last Guardian is now here and it has the flavor of both Ico and Shadow of the Colossus. Now, the question lies, did The Last Guardian live up to its hype despite the long development cycle? Let’s find out.

I’ve played Shadow of the Colossus in 2007, and it was intense, brimming with action and adrenaline when you engage with the first colossi.  When 2009 hit, Sony showcased The Last Guardian for the PS3 at the Electronic Entertainment Expo 2009, and it was a great sight to see especially that people behind Shadow of the Colossus were working on another adventure game filled with challenges, bringing the bond of both man and beast as its focus. 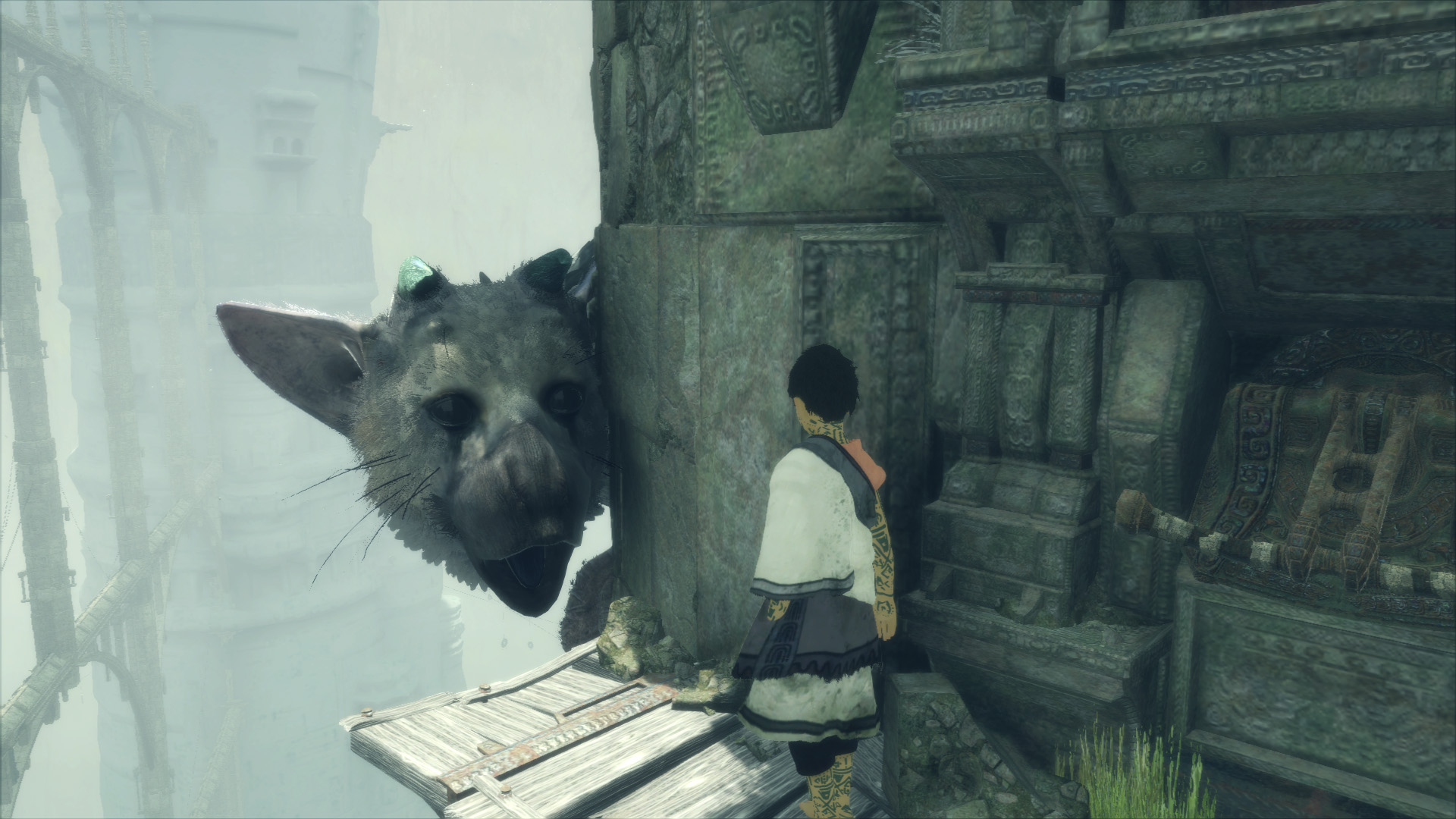 The story is predictable at the start, but it slowly changes as more layers of its backstory are revealed throughout your progress. Narrative wise, it might not be as exciting as Nathan Drake’s adventure in Uncharted or appealing as Rise of the Tomb Raider but The Last Guardian gives a lot of memorable moments and scenes that can make you say “awe”, and it can also make you jump from you seat at times you won’t expect. I won’t spoil anything important, I promise, and that it’s up to you to discover these moments. Even if the game had roughly only around 12 to 13 hours of playtime, it’s the moments you get to experience in The Last Guardian that matter most.

You start in an intense and chilling situation as you see the beast lying beside you when you wake up inside a darkened cave with low glim of light. The game encourages you to move the left analog stick for you to stand. And as the beast is suffering in pain, distilled with fear and anger, you find a way to let it know you’re trying to help, then the little tutorial starts. The basic controls are easy to grasp, and it’s not as complex as you might expect. You run, move, jump, and press a button to grab and throw. The Last Guardian highly encourages you take control in almost everything you do in the game, even the loading screen after you die.

Your adorable beast companion, Trico, is there to help and protect you at any cost (reminds me of BT’s Protocol 3: Protect the Pilot in Titanfall 2). As you develop the bond with Trico on your journey in the ruins of what is called the “Nest”, its real charms show slowly. When that bond develops, you can tell Trico to jump, sit, push, and let it go to where ever you want it to. There’s this little catch to it, and it may sound frustrating that Trico will take some time to follow what you want him to do; but I find it enjoyable when Trico is not some kind of robot where he just listens to you and do the things you want it to do. Trico’s mind is genuine as it can be as a creature, he’s purely made as a beast, not just a character in a game that simply follow commands in a game; and that you have to try multiple attempts before Trico can do what you want him to do. I can say patience is key amongst all. 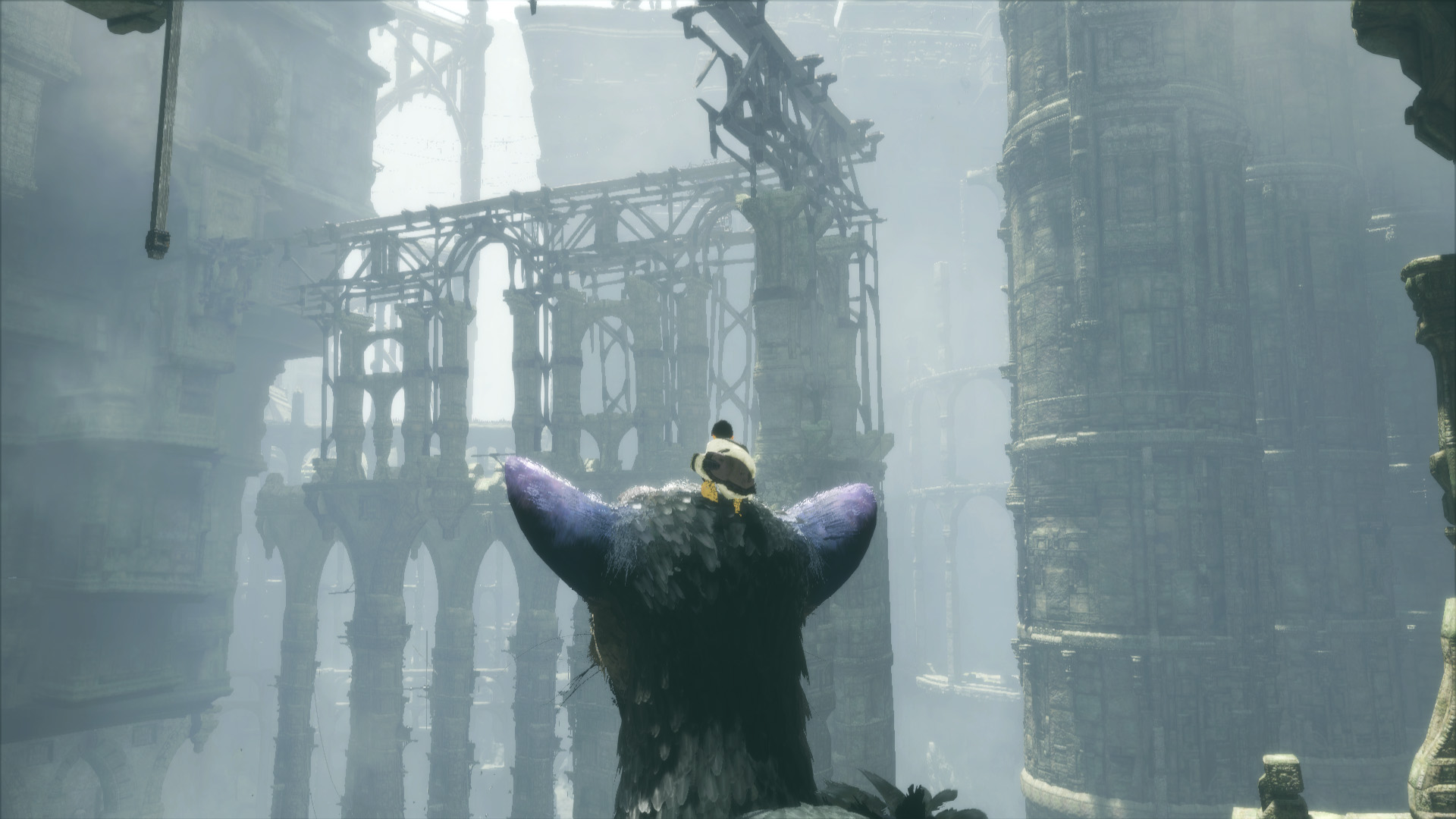 The Last Guardian’s core gameplay as an adventure game involves a lot of platforming and puzzles that can be solved when you think outside of the box – most of the time. It can take your patience up to the limit as the game’s pace is slower than you might expect. You take more time looking for a way on how you can get the gates to open, and a lot of climbing and jumping. It gets frustrating at times, yes, and provided that there are no hints or tips, you’ll definitely get the sense of irritation coming your way. And this is why I think the game’s core gameplay is solid at best. It encourages you to think, and to venture into areas you think might not even be possible, just to figure out the way through. The satisfaction of successfully solving the puzzles can give you some feeling of comfort… and a little bit of headache.

For being a highly-anticipated game, and if you’re new to the games of genDESIGN (Team Ico), then you might be disappointed. But for those who has played Ico and Shadow of the Colossus, and has this mindset to interpret art in a different way, then you’ll definitely say this is the perfect mix of the two. Its compelling and interesting art design and direction has led me to a point where I just can’t comment on art itself, but left me to discover most of what it offered. It’s the vision of Fumito Ueda, and those other artists with a painting of splattered colors has its own story, and it’s up to you as the person looking to decide how you’re going to interpret the art; and this is what The Last Guardian is — it’s a work of art.

While we talk about art, how is The Last Guardian’s visuals? Is it mind-blowing as Uncharted 4 or is it as colorful as Tearaway? The answer to that is it’s not between the two or even comparable to either of the titles I mentioned. As much as I want to say, The Last Guardian’s graphics are great, some might not agree. But I stand my ground that it’s one of the best looking games in 2016. The lighting and shadow effects are also top-notch. And even if the boy looks graphically off because of its cartoonish-style, the game’s physics compliments its graphics by bringing both Trico and the boy move naturally. I’ve been hearing a lot of feedback about the game’s outdated graphics and that it should have been released on the PS3 instead, then I tell you, Fumito Ueda’s vision of The Last Guardian wouldn’t have been met. I mean, look at Trico’s feathers and the environments. 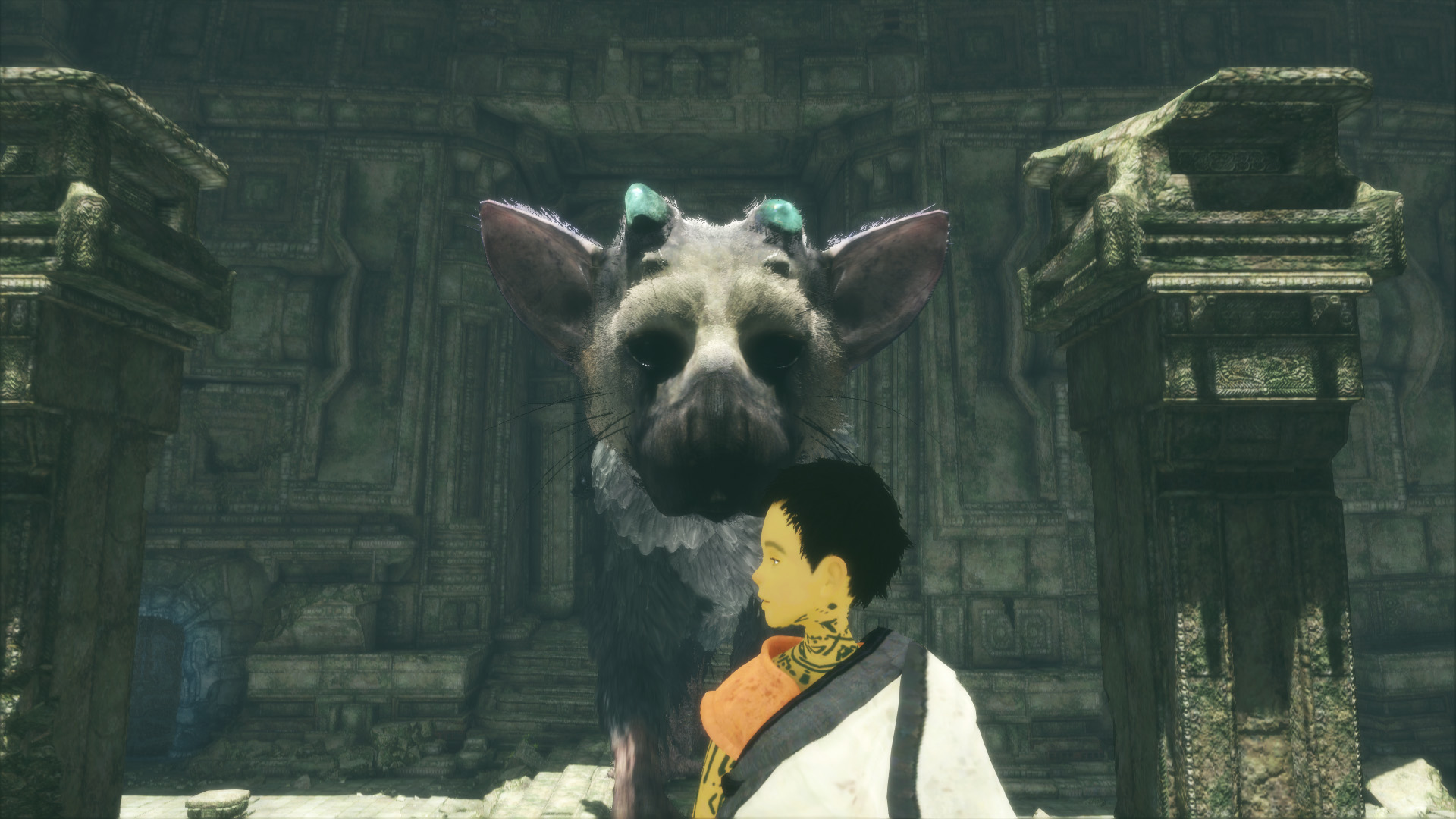 Trico and the boy’s animation are also impressive as what it has to show. You see the boy running then stumbles on little rocks, and when he takes a 360 degree turn he slides and drops then stands up and run again. And what I love about the animation of Trico is its movement. Trico doesn’t move wonky, robotic, and scripted at all unlike other creatures in other games (Laika in Robinson: The Journey). Plus the game’s physics responds fairly-well, and that it also has its hilarious moments where the physics makes the boy get dragged along fiercely when Trico’s head shakes really hard. It’s not game-breaking, but I find it funny at times.

When we get all of these memorable moments, frustrating yet alluring core gameplay, there are some dips on the game’s technical side. The Last Guardian struggles to hit a stable 30 frame per second in most areas throughout my whole playthrough, especially when it shows a lot of assets like in the outside places, and also when action sequences come in. This might be because of its huge location as it does not have any loading screens (aside after dying, of course) — it’s still playable so don’t worry, hopefully some few patches post-launch will improve its performance. It gives you this loading circle status at the lower right-hand side to show that it’s loading some of its assets for only a few seconds to a minute, and this only happened 3 times in my entire experience. I’m not sure how it runs on the PS4 Pro, but surely it will have some benefits from its hardware.

There is another patch made available last December 4, 2016. Version 1.02 has fixed some bug issues and gave slight improvements on the game’s framerate. However, there are still some sequences that the framerate would still go below 30 FPS. It’s a slight improvement and it made a lot of things smoother than the previous build of the game when I initially played it. 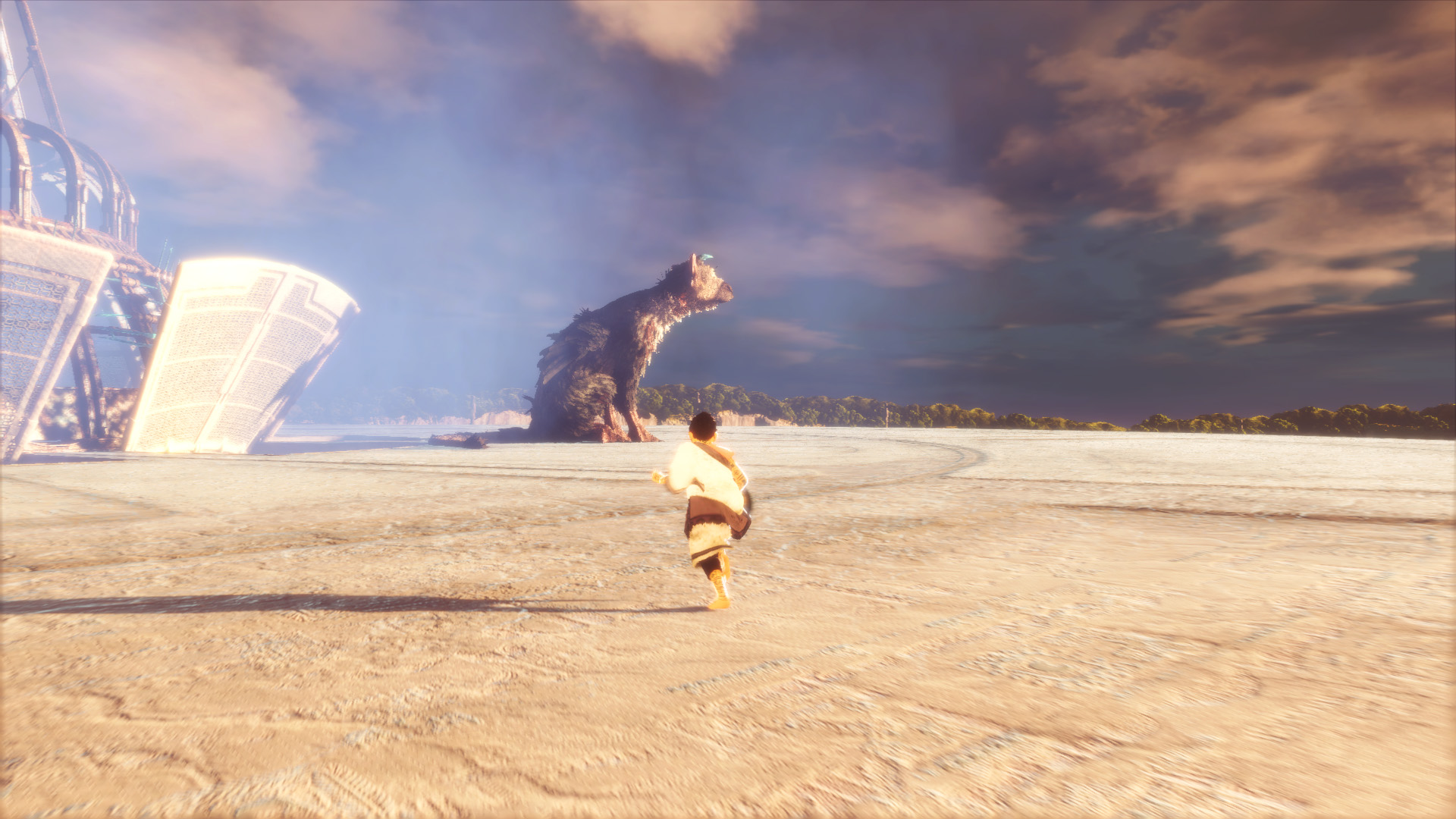 Aside from the inconsistency of the game’s framerate, the experience I had from its camera when I played the demo at a closed-media session for The Last Guardian in the Electronic Sports and Gaming Summit (ESGS) last October was not good either. It was unresponsive as it did take a second before the camera moved after you move the right analog stick, however, it did improve in this current launch build. The camera is still a bit erratic, and that it annoyingly gets out of place in enclosed and tight areas.

I’ve been waiting for this day to come with the hopes of The Last Guardian’s success and that it wouldn’t disappoint me, and I’m glad that it didn’t. It may not have the most compelling story and has some struggles to hit a stable 30FPS, but the bond of Trico and the Boy alongside its artistic game design and core gameplay mechanics makes The Last Guardian one of the most exciting cinematic experiences next to Uncharted 4. It’s a breathtaking adventure and a beautiful work of art!

[Screenshots are taken from a PS4 standard unit owned by the author.]

This review is based on a review copy provided by Sony Interactive Entertainment.