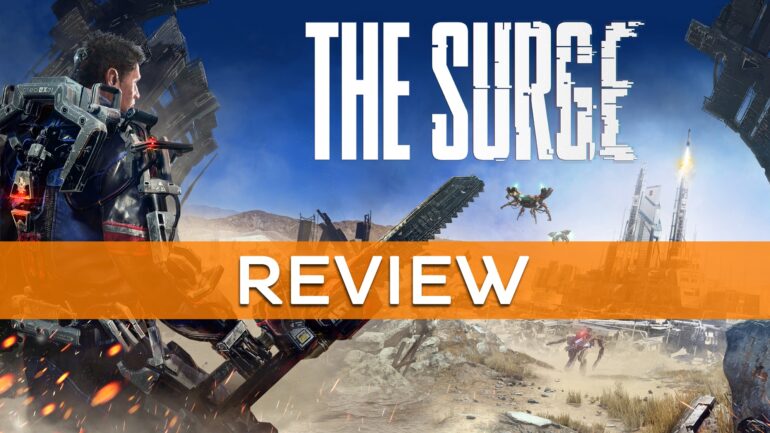 Evolution of technology will always be the utopia or hell for us. Just thinking about science running our lives will intrigue our minds. What if it turns out to be a living nightmare? The world losing its greenery and humans enslave with technology are terrifying. The world of The Surge offers that nightmare in an action RPG style, where it is set on a hardcore experience. Almost like entering a sci-fi version of Dark Souls or Bloodborne.

A short brief about the story: its setting is on an apocalyptic version where the gradual increase of the intelligence of technology has led the society and environment to a risky state. A wheel-chaired man going to his first day of work seems an innocent start for a story. Unfortunately, being drilled alive to the company’s exo-suit and especially the part of waking up in a drone-infested complex were not part of his plan and before he could completely regain his thoughts, a drone was already marking him for attack. The freshly hired exo-technician, Warren, must now fight and survive in a drone-infested area.

In the first hour of wandering the catastrophic CREO complex, I thought this game would be a cake walk considering the fact that I had easily killed off opponents but I was proved completely wrong. The frustrations and non-stop cursing every time I die came back, just like how I used to play Dark Souls and Bloodborne. Here’s my experience: since I was too confident to defeat the first boss, I faced it stupidly with less upgraded gears and ended up with the game’s “no vital signs found” instead of seeing the “you died” screen. Of course I tried it again and ended miserably, that was when I thought this thing is a deathtrap and it is sending me a clear message that I should salvage more.

First of all, The Surge‘s combat styles are horizontal attack, vertical attack and a dodge. If you were a fan of using Fallout‘s V.A.T.S., The Surge actually lets you target specific limbs of the enemies’ bodies. The best choice would always be the unarmored parts but not all them have weak parts, so better focus on one spot until you can weaken it. Choosing to attack their protected limbs would prolong the battles. Taking longer fights would not change anything though, except in increasing your chances of dying in battle. Warren also gives deadly finishers and I could say that this is one of the most brutal games I have played. Like any RPG games we know, the best way to fight is to observe your opponent’s moves before making an attack. Having a good strategy will save you from using too much of the health injections, which will be more useful in facing bigger nemesis.

Throughout the fighting you will be able to collect fallen armor and tech scrap. The tech scrap will also serve as your XP and the primary tool for your upgrades. If Warren dies, the tech scraps will remain on the spot where he died and Warren will respawn at the current MedBay. No worries about that though, since the game will give you a chance to retrieve the fallen scrap with a limited time of course. Again, you got nothing to worry about the time because your time will increase if you defeat enemies on the way and a bonus amount of scraps from the freshly farmed dismembered drones. If you think that it will be tiring to retrieve them, you can always use MedBay’s banking system to save your scraps before continuing to venture again. Thanks to that, you could easily gain more precious scraps by tearing apart lower rank enemies and gain more materials for upgrade. I even lost count on repeating these steps in one area but it did not stop me from playing nor getting bored from the action. Speaking about MedBay, it is the spawning point and upgrade station for Warren.

If you are rushing to get your fallen scraps or to go to the boss level, you can always evade your hay wired co-workers and drones, so escape is optional unless they will catch up of course. We all know that exploring will always be a possible suicide, but this type of game needs to be searched in every nook and cranny it got. There will be secret paths, mini-bosses, scraps and upgrades scattered waiting to be discovered. Besides, you can get more scrap or XP, so it is a good thing.

I admit that I have undergone countless humiliating fallen moments of this game but the drive of accomplishing it makes me feel superior and I honestly crave more of it. Good thing though that your current equipment would still be intact if you are stuck on an unforgiving level. Generally speaking about the graphics, it was impressively done and I like how the blood spews out.

I would also say that mecha or sci-fi fans will love this game as much as I do for even at the first couple of hours of game time — I had already immersed with the game. It was hard for me to let go of my controller, the action was getting to me and it set my carnage on rampage.

Lastly, here’s a tip: Improving everything you got is the key in beating this game. It would perfectly match the infamous quote of “Survival of the fittest”.

Now, gear up your best mechanic suit and start your expedition of the grim sci-fi world of The Surge and discover the truth about CREO!