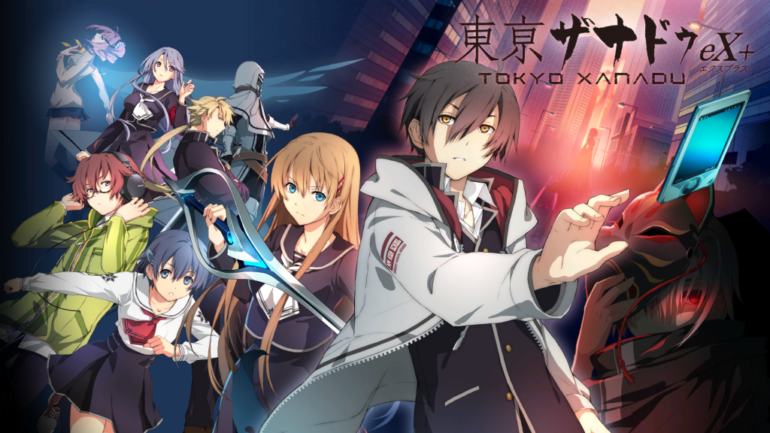 Tokyo Xanadu Ex+ is the PS4 port of Tokyo Xanadu that was released on the PS Vita this year. I really didn’t expect much from this game since this is the first time I have heard of it. But what I didn’t expect that I was going to end up liking it so much so that it felt like more of a movie than a game. 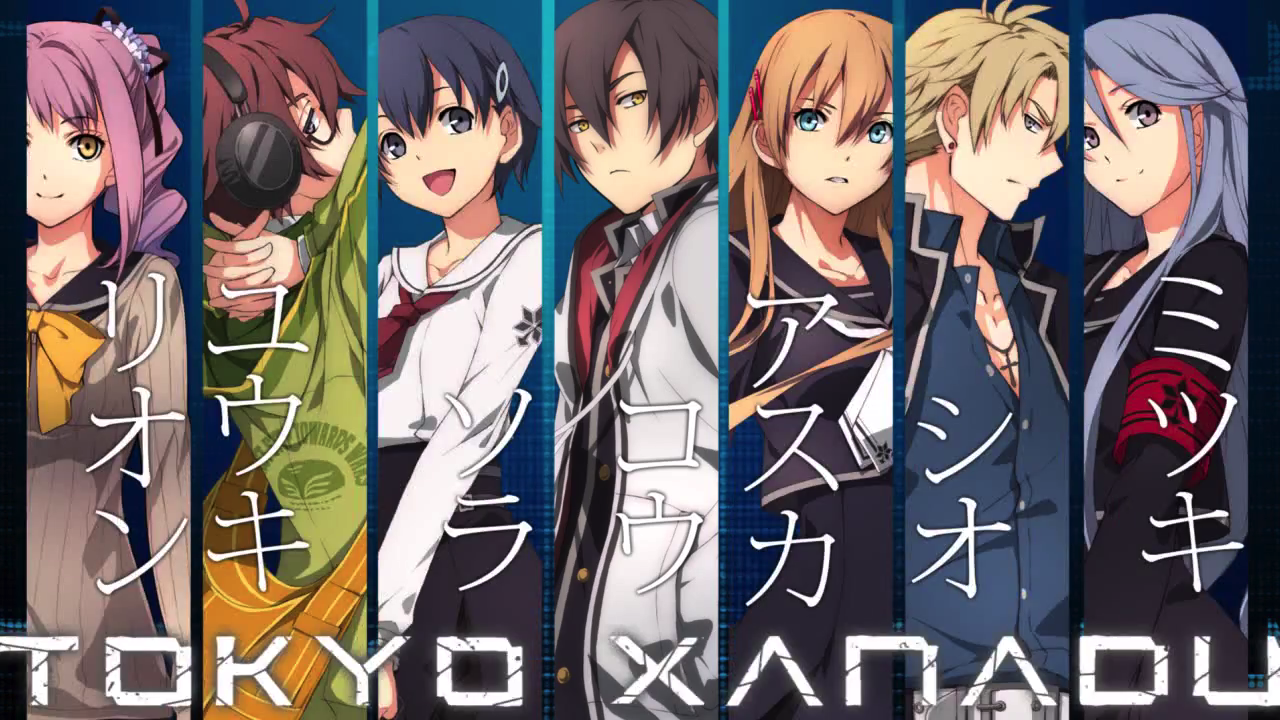 When I started playing the game. I initially didn’t know if I would like it or not but the more I played it, the more I was deeply engrossed in its story and its characters. Knowing how good the game was, I started digging into who created the game. And to no surprise of mine, when I saw that Nihon Falcom created this I knew right there and then that this game was going to be awesome. Nihon Falcom also developed the very popular Ys Series so knowing that made me understand why this game was great, to begin with.

Gameplay-wise, it did remind me a lot of Ys VIII as it has the same action-driven gameplay. Each character has three basic skills: ranged, flying, and strong skills. They also have the basic attack skill which is tied to the x button by default for R1 configurations. The characters can also jump and double jump as well. The Ranged skill is primarily used when you want to attack an enemy from a distance. While the Strong skills are used to break down heavy doors and obstacles and hit an enemy with a force of a thousand punches. The flying skill can help you cross wide gaps in the dungeon areas that can’t be crossed using the double jump but they can also damage an enemy if you fly right at them.

The combat usually only happens in dungeons of the game and you only get to control one character at a time which is really similar to how combat happens in Ys VIII. I don’t really mind the similarities because the gameplay actually works here as well plus it gives the game that kind of familiarity which you can only attribute to its developer. You start off the game with only two characters but as the game progresses you can recruit several others up to 8 playable characters. You can then take up to three characters into a dungeon. Doing so allows you to switch between characters and utilizing them depending on the enemy you’re facing. 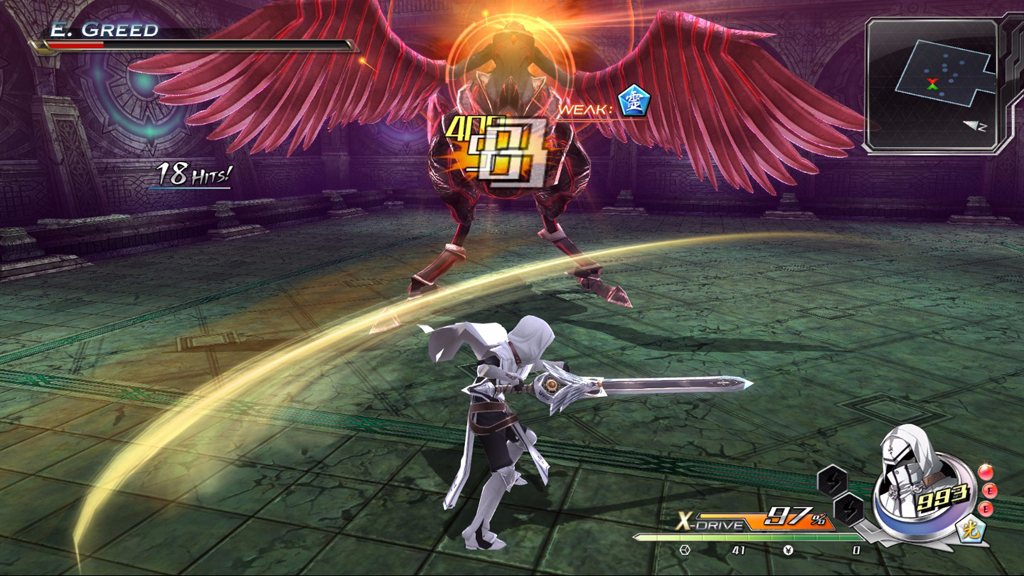 The game’s dungeon has enemies that are tied to five elements namely: Fire, Spirit, Steel, Shadow, and Wind. Spirit is more like Water or Ice while Steel is more like Earth. The other elements are more self-explanatory. Your characters also have their own affinity for the elements which you can take advantage of when defeating enemies. Enemies have weaknesses to a certain element so using the correct character to defeat an enemy is really important if you wanted battles to be a little easier.

Each character has their own unique weapons called Soul Device. These Soul Devices can be tweaked and upgraded by attaching them with elements. These attachments can significantly improve a character’s performance in the dungeons so it’s really important to upgrade them from time to time. Each Soul Device has several slots which you can attach an element to and you can unlock them by picking up items from the dungeons.

Each character also has an Ex drive ability which I’m guessing where the Ex from the title is coming from. These abilities are simply stronger versions of their strong skills and can dish out massive damage to enemies. The characters also have an X-drive gauge that accumulates points over time and once it’s at 100%, you can activate it to summon your backup party member and make your enemy vulnerable to any element regardless of what element your current character is using. 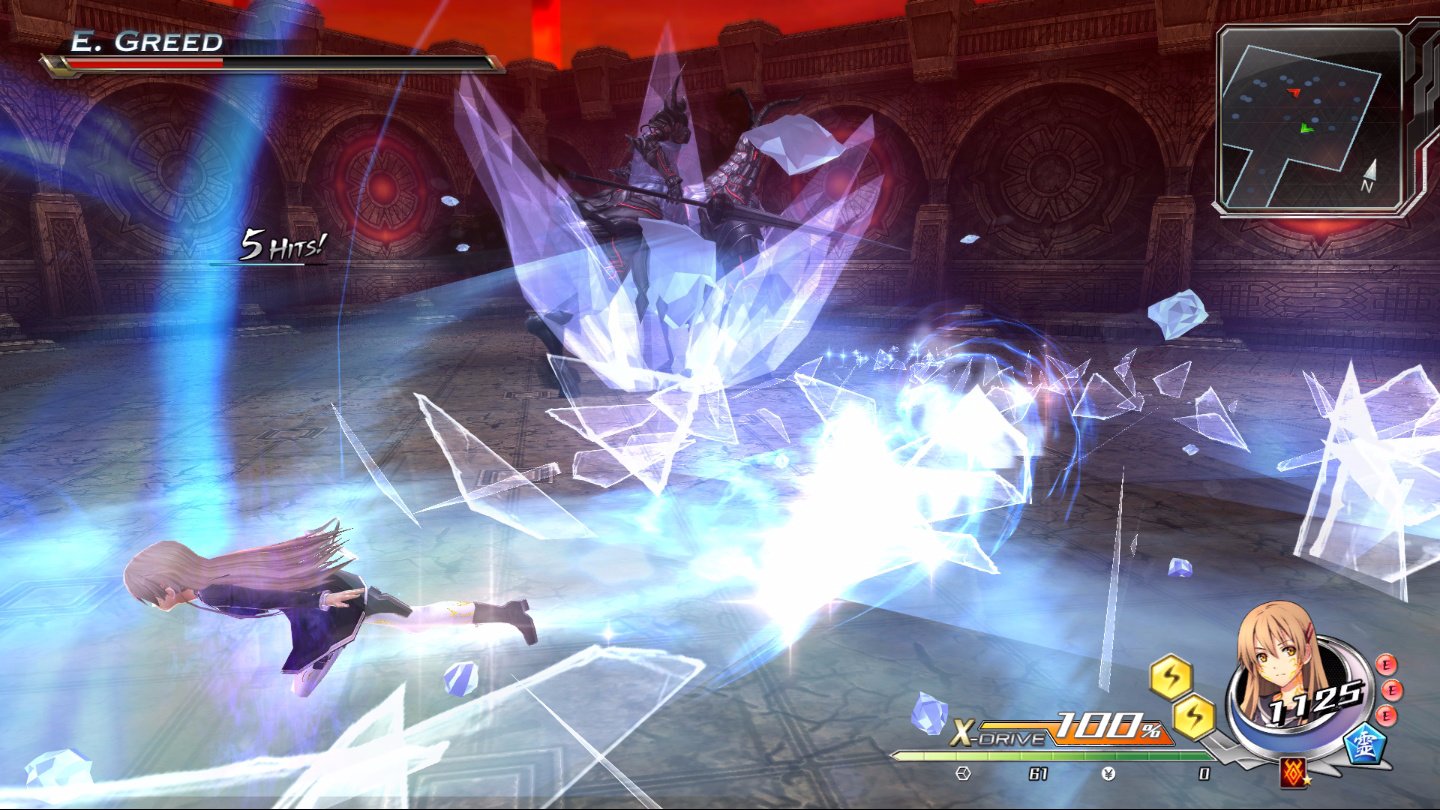 A character’s element is determined by the master core of their Soul Device. Each of the characters that are playable has their own default master core element which can be swapped out later in the game for an element they are attuned to. But our main character which is Kou, can switch his master core to all the other elements which are understandable especially when a dungeon requires him to be a mandatory party member.

Aside from the weapons, your characters can also equip armor and accessories. They can also equip costumes which are comprised of the uniform and two add-ons which can either be a whole costume set or a headgear. This makes your character truly your own as you mix and match the many visual items for your character. These costumes do not add anything to your stats but it’s fun to look at them all spruced up like a Christmas tree. One of my favorites was the pumpkin head costume which makes your character look like they came straight out of a horror movie.

The game is divided into chapters. There are 8 chapters in total in the main game with a side story chapter for every chapter except the 8th. It seems that it’s not possible to skip the side story chapters as the game tells you to go through the side story chapter as well. What is unique to this game which makes it more like watching an anime is that whenever you get to play a new chapter, an opening music video plays. You can always skip the video though if you don’t want to waste some time on it but I find it entertaining and that it adds to the “episode” feel of the game.

The story revolves around Kou, a 2nd-year high school student at Morimiya Academy. He was just an ordinary high school student who has a lot of part-time jobs on the side so that he can pay his rent. But one fateful night, he comes across Asuka, a girl who is the class representative of his class. He gets mixed up in Asuka’s affairs when he saw that Asuka was being harassed by some punks underneath a bridge. What he didn’t expect was the showing up of an interdimensional gate that took him and Asuka into a strangely different world. A dungeon that has some otherworldly creatures. What happens next was a series of events that is best left experienced when you play it. 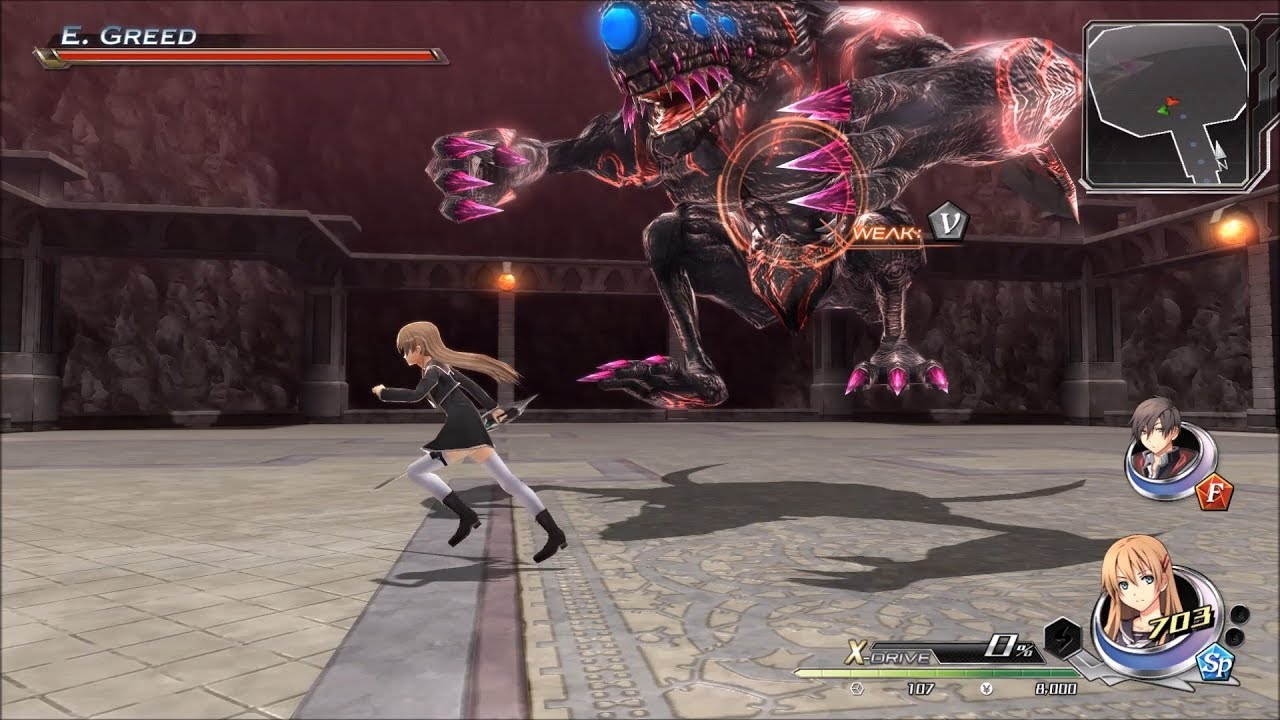 Story progression is really good as the game introduces each of the playable characters one by one. Providing us with in-depth backgrounds to each of them. Making them relatable and someone that you would want to play with. They really did a good job at making these characters memorable and it really feels like they came out of an anime. The story is so well-made that I was genuinely surprised by the revelations they provided. The game also provided a lot of feel-good moments and moments where it can get emotional. It’s a well-balanced story that is reminiscent of a good old JRPG.

I also like how the game introduces the components of the game.They introduce game mechanics gradually and in a way that it makes sense for you to know them. Nothing feels out of line and it’s understandable enough that it’s not overwhelming.

Each chapter has three phases namely the introduction, the free roam phase, and the final dungeon phase. The introduction is basically where you get to see the opening video and what the chapter will be all about. The free roam phase will be the time where you get to visit places on the map and bond with your allies or several NPC characters. These bonding moments remind me of the bonding moments in the Persona games. However, the number of people you can bond within each chapter is limited to the number of affinity shards you possess. Each chapter usually gives you 2 affinity shards that you can use towards having a bonding moment with a character. You can also get an additional affinity shared by clearing a free dungeon or an optional dungeon that shows up in each chapter. 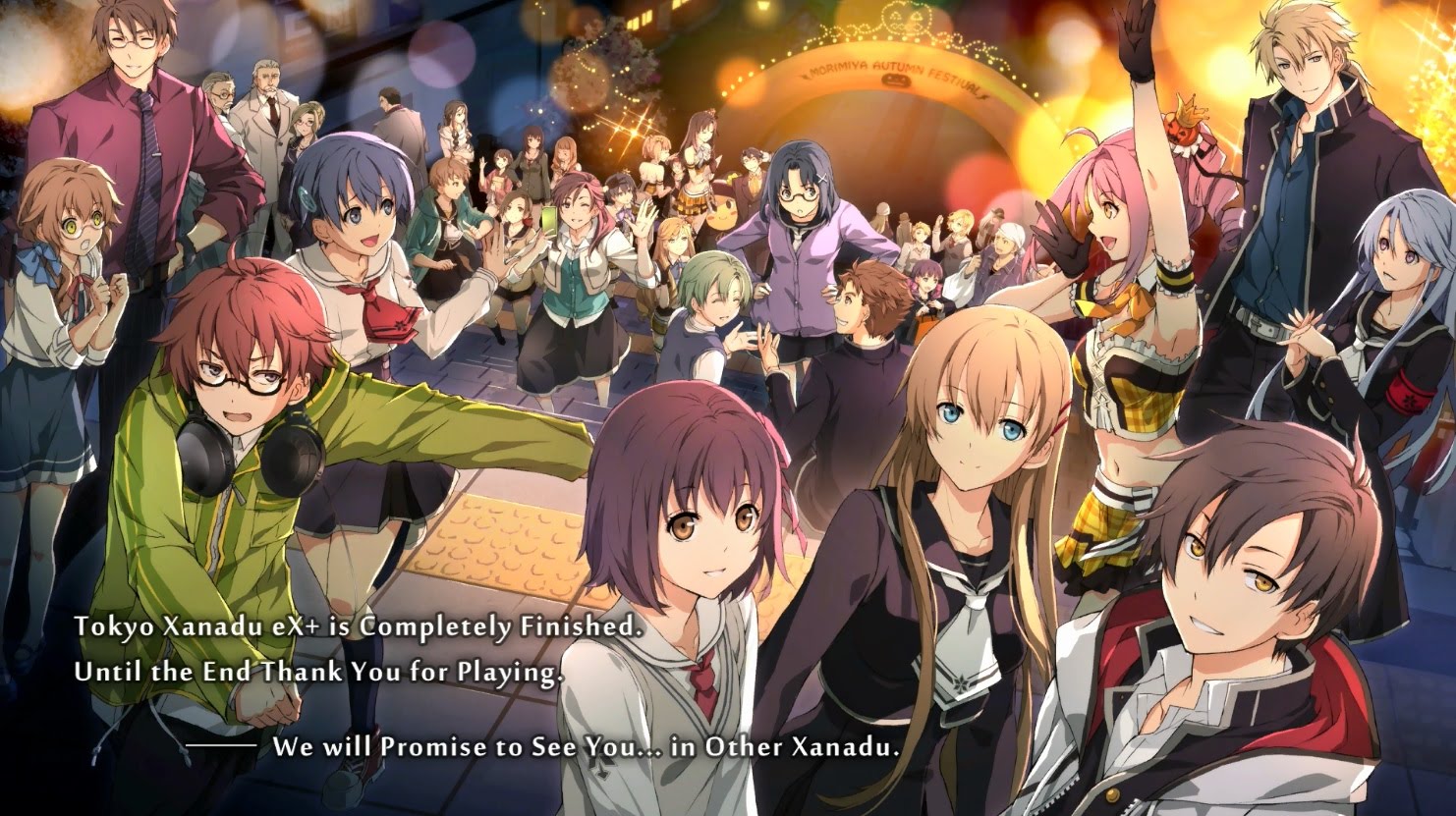 Bonding moments with a character is important if you want to progress the relationship your main character has with them. Although this game doesn’t have romance, these bonding moments help towards unlocking rare accessories and upgrade the Soul Level of playable characters. Upgrading the Soul Level unlocks special abilities like Linked X-Strikes and strengthen a character’s X-strike as well. An X-Strike is like a character’s ultimate ability unleashing a devastating blow upon the enemies. While an Ex drive usually targets a small area, the X-strike targets all the enemies on the playing field. Since there are only a limited amount of affinity shards, it’s impossible to max out a relationship in one playthrough. However, the game does have a new game+ mode where you can carry over the relationship level of your characters so you don’t have to start back at one.

The game also has an alternate ending which I was fortunate to unlock on my first playthrough which adds more depth to the story. I highly recommend aiming for that to make your experience of the game complete. Unlocking the alternate ending also unlocks the After Story which is an additional plot story to the game.

To wrap it up, Tokyo Xanadu Ex+ provides a completely immersive experience that you can only find a great JRPG. A game that provides a lot of replay value and a lot of things to do without being boring or overly repetitive. Even the side stories add up to the story’s greatness making it a well-balanced game. If you ever find yourself not knowing what to do with your life after playing Persona 5, then this is a great game to dive into. It’s a game that’s worth adding to your collection of JRPGs.

Tokyo Xanadu Ex+ - Review
Score Definition
May it be the likes of Shadow of the Colossus or Metal Gear Solid, if it’s quite there but not enough to push the boundaries, it’s still an awesome game.
Pros
Great in-depth story
Awesome gameplay mechanics and features
Customizable characters!
Awesome soundtrack
Cons
Too little affinity shards
9
Excellent