A round-up of the top and most notable video game bosses of 2021. 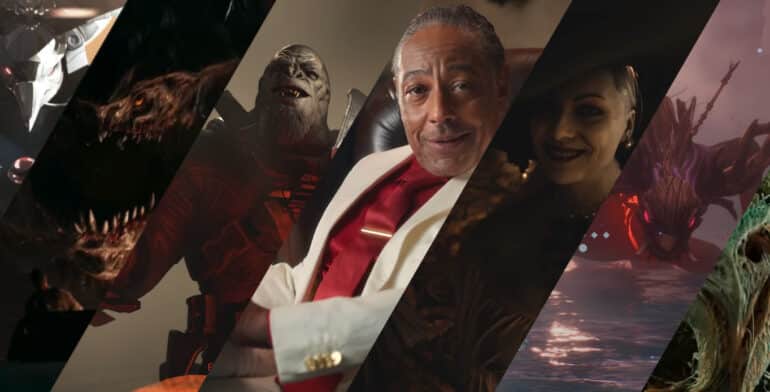 Game bosses provide quite a wide array of experiences and emotions. Some of them we have loved and swooned upon because of their character and charm, while some just outright give us a nasty and frustrating time. They surely have left an impression to us gamers in a myriad of ways. Here is the list of our top 15 bosses from games that came out this 2021 .

These two elder dragons are quite a pair. Considered as the final bosses of MH Rise, Narwa and Ibushi aren’t actually malevolent in nature as they’re just trying to find each other so that they could mate. It just so happens that Narwa’s “booty call” is making the other monsters in the vicinity go mad, hence the Guild has to step in to take care of the matter. Similar to a mantis, Narwa consumes Ibushi’s life energy to fertilize her eggs, killing Ibushi in the process and transforming into Narwa the Allmother.

Also, they both fly upside-down most of the time, which is kinda weird.

The Great Prophet is the ruler of the space cult called The Circle which aims to cleanse the galaxy, but ends up doing it through forceful subjugation. The final act is an epic fight, where the Great Prophet transforms its ship into some sort of a space worm. Seeing the massive worm moving through space and comparing how puny Nara and Forsa is against it brings an additional level of satisfaction upon dealing the killing blow.

In SMT V, Lucifer is also known as the God of Chaos. Having almost similar analogs to the devil of the Bible, Lucifer sometimes speaks to the protagonist, urging the protagonist to make choices that will end with the protagonist taking the throne. Depending on the choices made, Lucifer can be encountered as the final boss in two different endings, one of which is considered as the true ending.

Dr. Nefarious’ variant from a different dimension, Emperor Nefarious is a more successful tyrant and has managed to conquer a vast majority of the universe in his own dimension. His motivation is to expand his empire all across the other dimensions through brute force and sheer number. He’s quite a self-absorbed and narcissistic character, which makes defeating him more satisfying.

Raker was a high-ranking cardinal of the Universal Church of Truth, the antagonistic force that the Guardians had to deal with. Though it was revealed that he was only being manipulated by Magus, Raker still possessed immense power which proved to be a challenge for our ragtag team. In the end, it was still satisfying to beat up a space cult nut.

Joy was the first plant that Cody took care of in his garden. When Cody and May’s relationship had gone sour, it caused Cody to neglect his garden, which in turn caused his plants to get infected. When the couple managed to cure Joy from her infection, Joy reminded Cody about pursuing his dreams. (And we felt that)

Joy and Cody’s story hits close to home especially when most of us got cooped up in our houses for most of the year, making some of us adopt the plantito/plantita life.

The Abomination is sort of a mix between a frog, a shark, a slug, and an octopus – truly an abomination. It’s the largest Ridden that players will have to face in B4B and it kinda looks like the Biollante kaiju from Godzilla. Though it’s scarily humongous, it’s still quite a fun boss to fight against. It’s so satisfying to take down a towering monstrosity with just bullets.

Escharum was known as the war chief who managed to take control of the Zeta Halo. He was also known to despise humans, considering humans as a lower species than their kind. The final encounter with Escharum can be quite a challenge because he’s relatively tankier than the previous encounters, plus he has the tendency to chase the player while dealing considerable damage. In the end, Master Chief mortally wounds Escharum, but does not kill him out of respect as a fellow soldier.

He’s not that kind of Karen, but can equally be a pain in the butt to deal with. He shows up a a boss encounter multiple times and ends up as the final boss. Karen has a number of skills that he can dish out, but he’s known more for his ability to teleport in quick succession. One of the most memorable encounters is during the second phase of the final encounter where he manifests giant masked statues to fight for him.

The Corrupt Rot God was created by Toshi when he fused the Rot with corruption. During the first part of the encounter, the Corrupt Rot God can still be seen with a health bar, but it eventually loses it as the gameplay turns from combat to more like a puzzle. The playing field also becomes more dangerous as the fight progresses because of the surrounding corruption. Be prepared for a long fight as the Corrupt Rot God’s encounter has multiple stages.

Out of all the Returnal bosses, Hyperion stands out. How often do you get to fight a boss who just jams out on his pipe organ throughout a fight? It’s like he’s giving us a front row concert experience paired with a mesmerizing light show – though not the kind of concert you want to be standing still at.

What more can we say except for it’s a huge friggin’ dragon that you can fight while even mounted on a horse. What makes it more awesome is that you don’t just find Agheel, approach it, and start fighting it – he actually swoops down if you stay long enough at the ruins. Considering that this was just the beta, we’re excited to see what other beasts can compete against Agheel’s scale and power once the full game comes out next year.

Despite not being Samus’ biological father, Raven Beak still refers to her as his “daughter” as part of Samus’ DNA actually came from him. That same infusion gave Samus enhanced fighting abilities. What made Raven Beak notable was the initial encounter and the rematch. He cycles through his ranged and melee attacks so well, you’ll definitely have to learn how to keep up.

Ah, yes. The lady who shook the internet when the first teasers for RE:8 came out. Lady Alcina Dimitrescu was one of Mother Miranda’s Cadou hosts who resided in Castle Dimitrescu with her three fly daughters. She was also the first boss that Ethan Winters had to deal with in the game. Her ageless beauty and classy demeanor, amongst other things, managed to charm a large number of gamers quite effectively.

Sadly, her time in the game was relatively short-lived. We were hoping that she would still show up in the latter parts of the game, but alas.

Known as El Presidente of Yara, Antón Castillo served as the main antagonist of Far Cry 6. His nationalism may seem admirable as all he wanted was to make Yara prosperous, but he ruled over the state as a dictator with an iron fist. Despite this, players may still find his charisma very endearing, of which a huge part of was brought to life by the actor Giancarlo Esposito.

Also, who could forget that time when he sent out emails to Far Cry 6 players mocking us for having “rookie numbers” of play time?

What do you think of this list? Do you have other video game bosses that made your 2021 challenging?