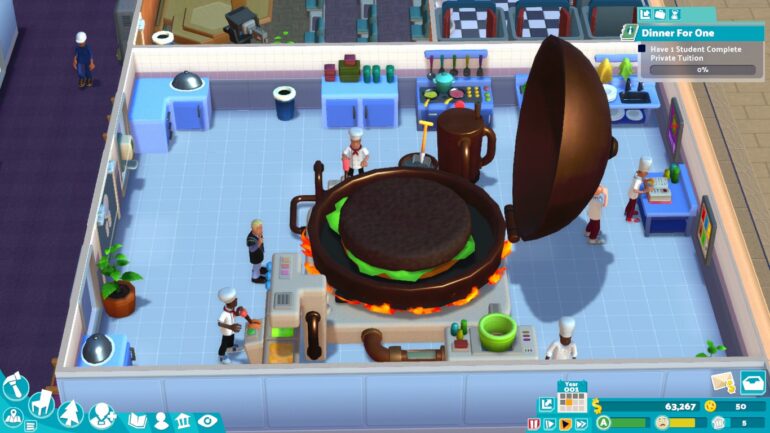 Ah, the college experience (ala Two Point Campus). There’s nothing else quite like it. Going off into the world for the first time, meeting new people, trying out new things, forging life-long relationships, and generally just finding yourself. Apart from getting a degree, that’s what college was to a lot of people. And I am happy to report that Two Point Campus captures that feeling… for the most part.

Before going any further, I would just like to say thank you to SEGA and Two Point Studios for allowing us to be part of the Two Point Campus preview event. And although we had a limited amount of time to play around with the preview build, I learned a lot about the game and how it ultimately stacks up compared to Two Point Hospital.

Anyways, on with the hands-on preview.

I often wondered what was next for the Two Point series. Two Point Hospital captured the spirit (and more importantly, the quirky humor) of Theme: Hospital. But what should be next in the series? I always imagined it to be the grocery store. We often hear it being advertised on Two Point radio. It certainly wasn’t going to be the zoo. (Never say never.) So imagine my surprise when Two Point… Campus was announced. Need to say, I was left stunned and wanting to hear more.

When it comes to Two Point games, there’s always the question of “how much stuff can I cram into a room, and how do I make it look good?”. Apart from some of the facilities needing a lot of space, it never really got to the point that I was lacking space for extra items. And trust me, you’ll want to leave some extra space. At the end of the day, you have to adjust according to your students’ needs.

Speaking of students, let’s talk about them for a bit. The students entering your campus are there to study in the course they enrolled for. They will make use of the facilities on hand to further that. And there will be times when a student will request specific learning stations.

And that’s when it hit me. Unlike Two Point Hospital, Two Point Campus wants these people to stay in their programs throughout the duration of the course. This simple, yet eye-opening change in the formula made me rethink everything I know about planning out the layout of my buildings. I had to think well ahead to keep up with the demands. Especially when next year’s batch of new students needs facilities of their own. Expansion has always been part of the gameplay loop but it was always swapping rooms out to address patients’ needs. In Two Point Campus, you are expected to constantly expand your facilities as the years go by, and make more of the same rooms.

As for staff, we have professors, assistants, and janitors. Professors are akin to doctors and janitors are… janitors. It’s that straightforward. Assistants, on the other hand, function as both nurses and assistants from the last game. In Two Point Campus, they do everything from manning food/drink stands, keeping the library in order, and overseeing student unions. We don’t need to go into detail with that yet. Just know that it’s there to help students loosen up and hopefully socialize more.

During the enter play window, we only got to play the first two stages of the game. And it was enough for me to have a solid idea of what the game was all about. It is quite different from Two Point Hospital. That’s for sure. It’s even improved on a lot of things. There are a lot more animations now than there were when Hospital was first released. It’s a lot more alive since the little people aren’t just waiting in line for diagnosis and treatment. Students move from room to room constantly and something is always happening at any given moment.

The biggest change for me is the fact that we are free to change whatever we want when it came to the design of buildings. Usually, when we expand, we are given a premade building and we have to adjust to it. With Two Point Campus, we can change everything – the building, the grounds – all of it can be changed according to our own designs. This level of freedom outside of sandbox mode is exactly what this series needs, and we’re getting it.

But as with good things, there are some things the developers can work on to further improve the game.

Building placement, for instance, needs a little more work. It gets kind of sketchy when it comes to edge cases. And sometimes I can’t explain how some of the bounding boxes work. But that’s something we’ve been told ahead of time and something the developers are constantly working on. So, I’m not worried about it, especially now that they have more time to work on it.

Another thing is showing giving students a little visual change when they return next year. All of the students from 1st to 4th years look the same to me. And sometimes I can’t really tell unless I specifically select them to know which year they are. I think it would be good to see higher year students wear a different jacket or something. Anything to make them all stand out a little more.

All in all, I’d say this game’s got a lot going for it. A developer that cares a lot about the series and continuously gives their games updates and a community that holds the developers to a high standard. I believe Two Point Campus is greater than the sum of its parts. It just needs a little bit more to get the most out of its potential.