Two Point Hospital Review – The Bright Side of Triage 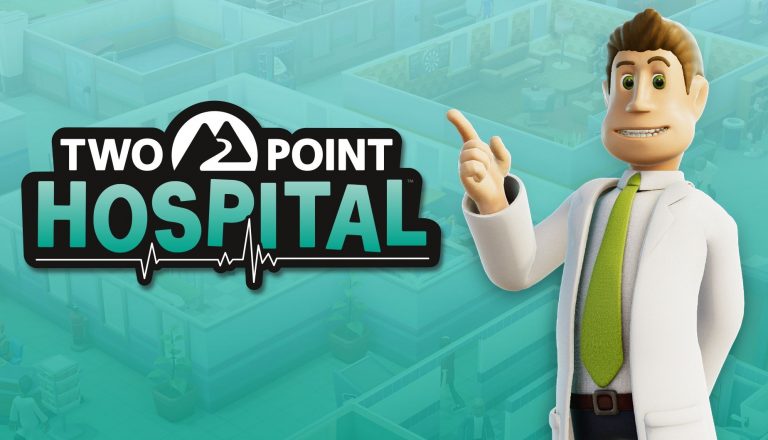 No one looks forward to going to the hospital. As much as it is a place one goes to seek treatment, but can’t help but feel vulnerable while being inside of one. It’s one of those places where people are reluctant to go to. And once there, can’t wait to get out of. Well, if Patch Adams is to be believed, maybe a little laughter can go a long way in terms of treatment. And games such as Two Point Hospital may be exactly what is needed.

Two Point Hospital is a business sim that simulates the everyday workings of a fully functional hospital. Or… as comedically close as possible. Players take on the role of general manager where it is their job to build facilities, hire staff, and cure as many patients as humanly possible.

The player starts at an overview map of Two Point County. From there, the player starts on their journey to build and maintain multiple hospitals. The first hospital is always the easiest, being a small operation capable of diagnostics and the curing of minor illnesses. As word of their reputation grows, they will receive an invitation to take on the trouble spots that truly test every aspect of their management abilities.

Each level starts with a single building with multiple plots of land around it for the sole purpose of expansion when the need is there. The starter building usually hosts reception, General Practices, and diagnostics facilities needed to prepare patients for more specialized treatments. Ultimately, however, it is up to the player to decide how best to design the general layout of the hospital. After most of the rooms have been laid out, it is best to consider hiring staff. 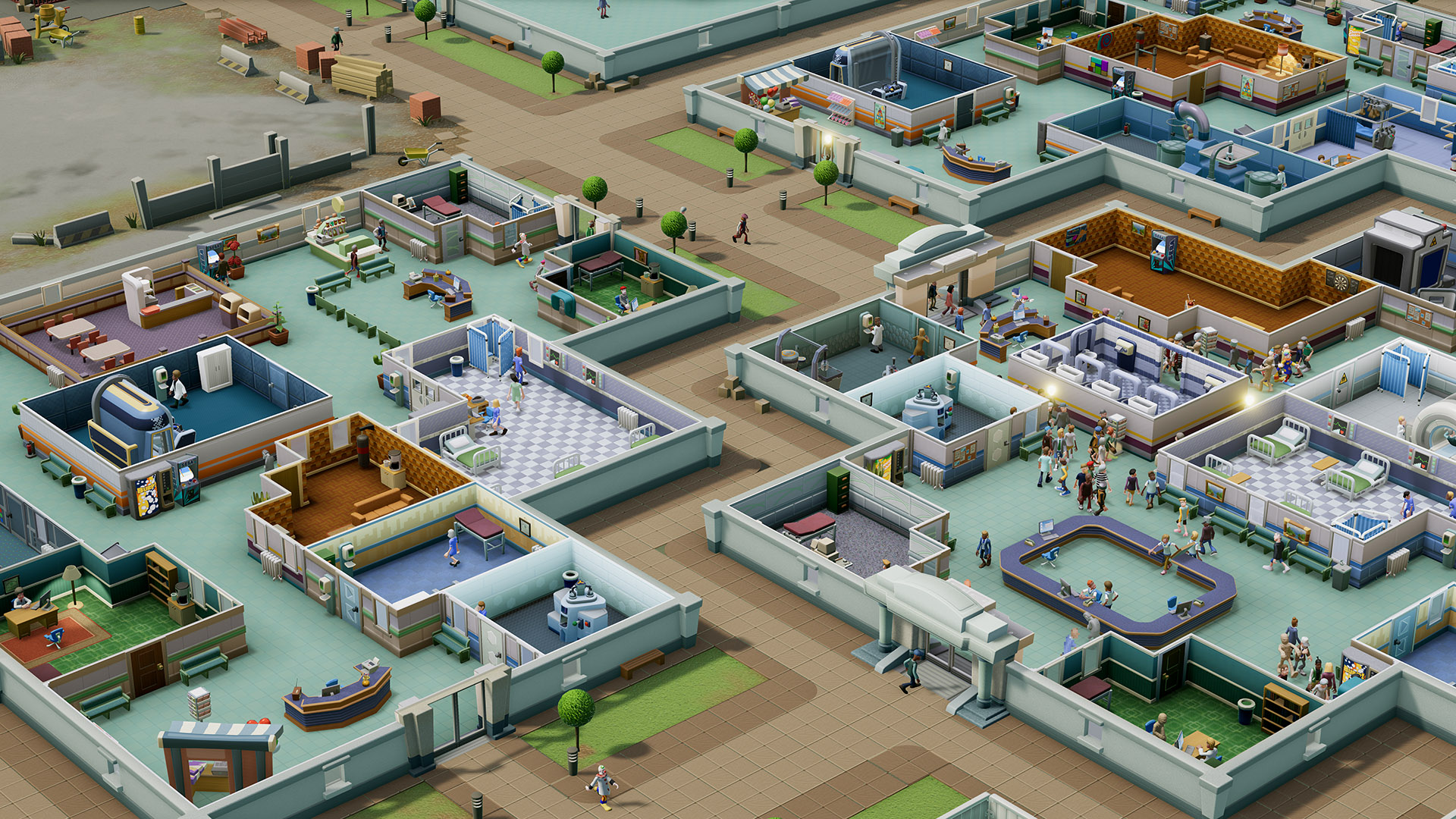 The staff is broken into several categories: doctors, nurses, assistants, and janitors. Assigning the right staff in each room will get them to work immediately, with only the janitors being capable of work at any location. Once hired, all staff will begin the process of tending to patients. It is good practice to place them in rooms that are within their capabilities. The job assignment tab restricts the kinds of tasks the staff is allowed to work on based on their skills. In time, it is possible to build rooms for the specific job of training staff to add their current skill set. All of this for the sake of curing illnesses as quickly and efficiently as possible.

The illnesses in the game range from pretty normal to the downright hilarious. Take the illness, Lightheadedness, for example. The patient walks into the hospital with a huge light-bulb for a head, and it is somehow our job to screw that light bulb off and reconstruct its head. Very clever, indeed. It is important to know that the player’s success rate on a certain illness will determine the number of incoming patients with similar illnesses. Patients who die in the hospital might become ghosts, and will haunt the halls of the hospital until a janitor with the Ghost Capture skill comes along.

The aim of every level is to reach a 1 star rating in order to unlock the next level. To accomplish this feat, one must fulfill certain requirements as the level demands. Players may opt to stick around and aim for a 3 star rating, giving them a chance to unlock more upgrades and decorations for the hospital. Improvements to the hospital are bought with K-Points that the player earns by completing certain tasks. New items add to the appeal of the hospital, which is never a bad thing. 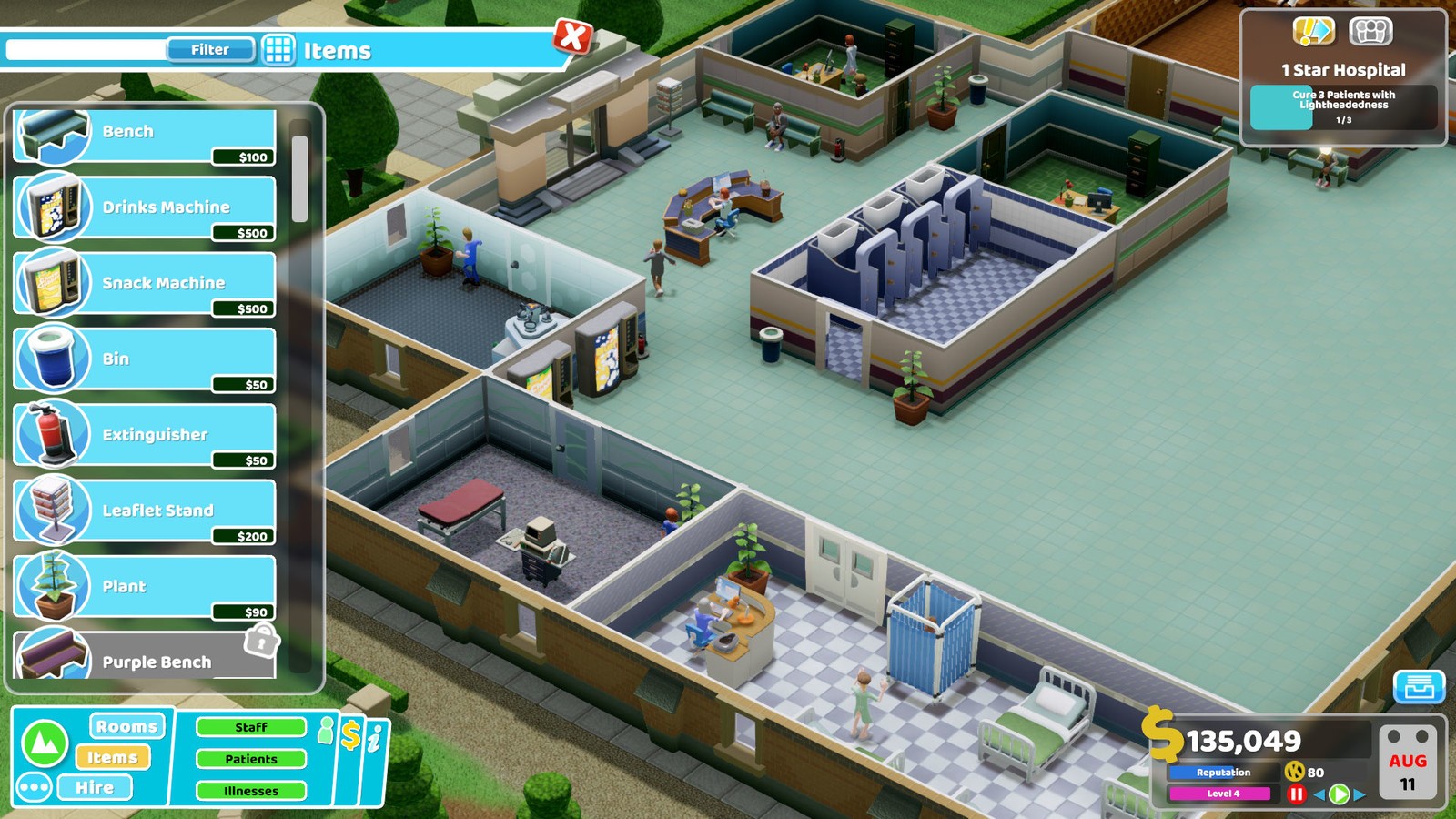 There is so much in this game that reminds me of Theme Hospital. It’s certainly equally as charming. But if there’s one thing that I can point out that truly reminds of Theme Hospital, it’s the announcer. She, along with Two Point Radio, adds so much personality into the game. Apart from being absolutely useful, her dry sense of humor never ceases to put a smile on my face. With regards to everything else, it seems everything is up to date with many features overhauled with the intent of making the player’s job much easier.

The dedication of an entire tab for status of all person within the hospital premises, be it staff or patient, is a feature most welcome. It is there that players can set a triage for illnesses they are perfectly capable of treating while deciding to either make the others wait or send them home. Something like it is unheard of in the old game, and one of my most favorite parts of the game. Without going into further detail with the other tabs, all of them allow a level of control in several aspects crucial to the maintaining of the hospital.

As the list of conditions grow, the number of facilities naturally grow as well. This is where one draws the line between and fun and frustration. It is possible to completely take it easy and play it safe in the game, if one is willing to send many patients home. The trouble here lies that eventually the long queue times will take its toll on the hospital. Taking a loan might be the next best thing to do should one wishes to continue fighting it out. In the end, it’s the player’s capability to adapt quickly that will determine the outcome of later levels. It can be overwhelming at times, and playing this game for long stretches is definitely not up for recommendation.

Two Point Hospital is the closest thing we have to a sequel to the original Theme Hospital. Almost every aspect of the game is overflowing with charm. But it is a game that demands focus and attention to deal with the many complications that eventually pop up out of nowhere. Thankfully, the game is optimized to the point that most gamers won’t feel too intimidated by the game’s mechanics. The game also seems to be running well without so much as an immersion breaking bug – just a word of advice: keep track of the positions of all items in the world. Might save yourself a few headaches. While I don’t recommend this game for all gamers, there is enough here to entertain all sorts of people.

Two Point Hospital Review
Score Definition
May it be the likes of Shadow of the Colossus or Metal Gear Solid, if it’s quite there but not enough to push the boundaries, it’s still an awesome game.
Pros
Controlling every aspect of the hospital is a breeze
New weird and wacky diseases to tackle in each level
Pays homage to the classic that is Theme Hospital
Endless design choices
Cons
Can be overwhelming, especially in later levels
Cannot recommend playing at long stretches
Getting 3 stars in each level is time consuming
9.1
Excellent