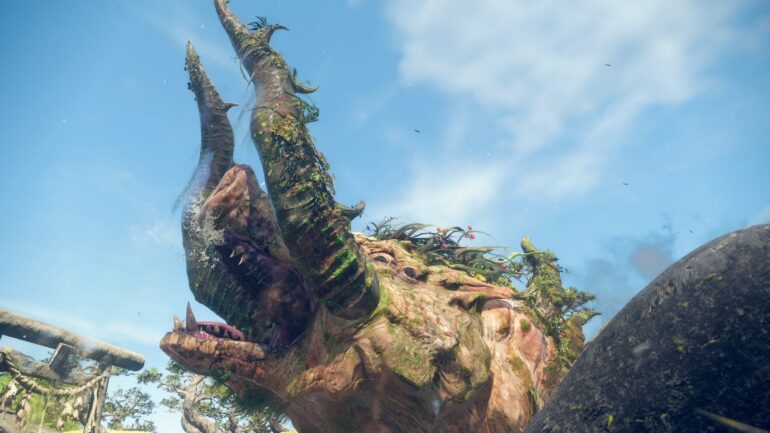 Wild Hearts is a new hunting game born of a collaboration between EA and Koei Tecmo. It is very similar to games like Monster Hunter but from what I’ve experienced while playing the preview build of the game, I can confidently say that it does enough to stand out from the crowd.

There are a lot of Eastern influences to this title. From what I can gather our character is Hunter on some sort of journey in this faraway land where humans and Kemono (the monsters) live in proximity to one another. In between them, there are the mysterious Karakuri, or machines inhabited by spirits, and an environment overrun by giant trees and endless vines.

There’s not much to say about the custom character creator at the moment. There is a handful of presets and you can go a little bit further with the use of sliders. It does also come with a preferred pronouns section for people who wish to use it. I don’t understand its use in a fantasy game with fictional characters but if someone needs it, it’s there.

The current build of the game is pretty robust for what it’s trying to show albeit with a few graphical and performance issues. It’s still better than most early builds I’ve handled in the past. With this build, I was able to get a good grasp of the weapons, the combat, the in-battle constructs, and the base-building mechanics. Let’s start with the monsters.

The three major kemono I encountered in the game are the Rage Tail, Sapscourge, and King Tusk. All three are main mission objectives whose primary purpose is to teach the mechanics of the game. The King Tusk in particular teaches players how to build barricades to counter charging monsters.

The monster designs look amazing. The monsters come with a wide range of animations and they look quite at home in a world rapidly reclaimed by nature. The most noteworthy thing I have about the monsters is that their tells are very subtle. It takes a while for you to completely read their movement and that really plays a huge part when it comes to combat.

Combat in Wild Hearts is fluid and very active. Your hunter avatar is constantly on the move. Only stopping to create constructs out of thin air. I think this has a lot to do with the current pacing of the game. The pace of the battles is a little higher than your average hunting game. The monsters are constantly threshing about. Leaving you no choice but to get in up close to deal any significant damage.

Every once in a while, the Kemono will gain a moment of focus and all the attention goes to you. It’s really hard to dodge their attacks when they’re in this state. I’ve tried and it feels like the tracking and attack “stickiness” is on a different level. (In other words, there are unavoidable attacks.) Regular rolls just don’t cut it anymore. And that’s where the sliding dodge comes in handy. It’s the method that works so far and it probably saved me more than not. Also, it looks really cool to slide under a tusk that’s as thick as a log.

There are currently 5 available weapons in the game. The katana, the nodachi, bow, bladed wagasa, and maul.

The Karakuri Katana is the default weapon that’s more nimble than the longsword from Monster Hunter. The more I see the weapon’s move set, the more it reminds me of Sephiroth’s sword minus the extremely long length. (Never say never though. Knowing the tiers of these hunting games, I wouldn’t be surprised if we got there.)

The Nodachi may appear like a great sword but in all honesty, it plays like the hammer in every measurable field. The bladed wagasa may be the game’s most unique weapon. It is capable of parrying projectiles and exaggerated sweeping. This is quite cool when combined with the fact that it has daggers for tips and generates powerful wind bursts every other strike.

There is a bit of a learning curve when it comes to weapons. Good thing that there’s a training ground just outside of camp. I should have taken advantage of that way earlier before I was juggled by the Kemono. But that adds more to the learning experience, right? (I’m just impatient, alright!)

The Katokuri are the MVPs of the whole game so far. Here’s why I think that. I can go through entire encounters not using them one bit and beat monsters just fine. But once incorporated into combat, you have this entirely new edge against them. The constructs open up new attack vectors that completely change the pace. There is a finite number of constructs you can make before needing to recharge. But there are resources you can pick up and upgrades to unlock to further increase build limits. So my dream of having a field of spins will remain… for now.

Building is not just restricted to combat encounters. You can place constructs in the field as well if you have enough resources. This becomes especially handy when you decide to put up sensor towers. You can also arrange your camp however way you want, provided you have found a safe place and the resources to build them.

That’s right. You need sensor towers to track the movements of monsters and you need to place them in strategic points with the most coverage to get the most out of them. This game is just full of surprises. And that extends to things like makeshift zip lines at were introduced late in the demo. I didn’t actually get to use it in combat (which is a shame.) but I can see its usefulness as a traversal tool especially when other hunters are able to use it in your world instance.

During my time with the hands-on build, I only have one complaint. I really dislike how long you stay stunned. I’m counting like 10-15 seconds and there’s me button bashing my controller at first to see if I can regain control faster. But nope. It was easier to just wait it out. If the monster hits me, it hits me. It’s not like I can do anything to stop it anyways. There is another complaint but that’s more to do with it being a pre-alpha build that requires a connection for multiplayer.

All in all, I’d say there is a definite reason to get excited about this upcoming Hunter title. And considering that this isn’t Koei Tecmo’s first foray into the Hunter genre with the Toukiden series under their belts. I believe they are capable of delivering a worthwhile product with everything they’ve learned over the years.