In this preview for Wildcat Gun Machine, the cat's out of the bag, and so is mechanized mayhem. 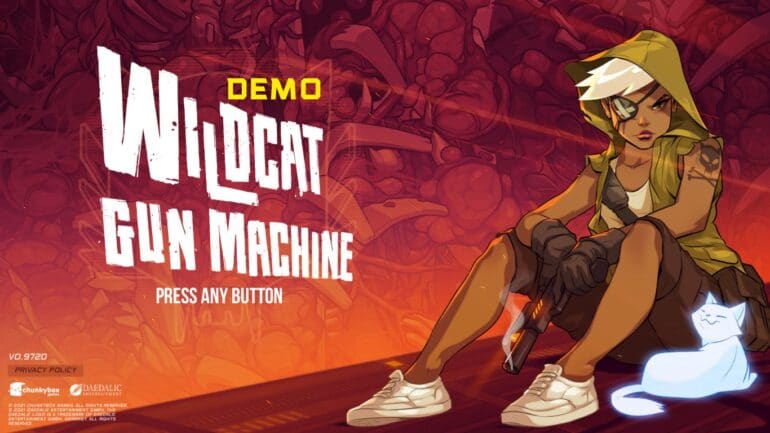 Isometric bullet hell shooters are usually very fun games. All you have to do is go into rooms, kill all the bad guys within, and look like a badass walking out – and that’s what Wildcat Gun Machine does well. We’ll talk about the one stand out feature the game is leaning heavily over in a bit, but right now let’s walk through how the demo for the game starts.

Wildcat Gun Machine starts us in what appears to be an industrial waste disposal plant. Scattered around the corridors, we find the dusty skeletal remains of other runners. Cause of death, unknown. The only thing they can do for us is provide a small amount of coin, but every little bit helps when it comes to bullet hells. The first enemies I encountered in the demo were flaming skulls that look as if they took a wrong turn from the last DOOM game.

The default pistol was more than enough to take them down with plenty of breathing room to move around. But despite the ease of killing them, it was a rather intense encounter. The aiming needs to be precise and reactions good enough to move between slow moving bullets.

Art style-wise, Wildcat Gun Machine opts for a chibi-ish sprite, and while it does look a lot different from images seen of the protagonist, it is still likable. Besides, there’s got to be reason why the in-game sprite looks the way it is, otherwise there might be questions as to why the hitbox doesn’t match what people see on screen, if the developers opted to using the girl people see on the start screen. (At least, that’s what I think.)

When it comes to controls – mouse looks in the general direction of 360 degrees, pressing right mouse click initiates a very useful dash that’s become invaluable in dodging bullets and enemies alike, and G throws a grenade. The grenade runs on a slightly long cooldown, so I believe it best to use it against groups of enemies.

Speaking of enemies, we have the floating skulls that constantly move in your direction. They’re usually there to distract you from the enemies that actually shoot bullets at you. The fleshy cyber zombies, as I like to call them, shoot slow moving projectiles. Don’t underestimate them for a second just they move slightly faster than the character. A lapse in focus for even a second is enough to get you in trouble.

And that’s where the mech comes in. The interesting part of Wildcat Gun Machine is that you are able to transform into the gun yourself once you’ve killed enough enemies. Building the meter takes time though, so holding onto your ace in the hole might mean the difference between life or death.

The mech’s attacks change depending on your current load out but 2 things are consistent – you have unlimited ammo and an unbreakable shield for a short amount of time. That short span should be enough to clear an entire room’s worth of enemies. I say ‘should’, but you never really know until the door opens up and the minimap re-appears.

At the heart of the facility lies a cat obelisk which the player can use to upgrade skills and to swap out weaponry. Fittingly, this is where the main checkpoint is, and is always surrounded by ghost cats. Traversing the map requires the player to collect different color key cards that unlock different areas. Thankfully, there’s a map so you won’t be getting lost all that often.

Getting hit too many times results in the player losing a cat life, and teleporting back to the last checkpoint. There are portals strategically placed around the map for ease of travel.

Battles in the game are generally intense. It’s not your typical dungeon crawler where you have to dodge randomly timed attacks. The enemies here shoot in patterns, and it’s in the player’s best interest to figure out the patterns and to react accordingly. There are also explosive barrels littered about the map too. I am grateful that enemy bullets do not activate them, it seems to only react to the player’s attacks.

The boss I encountered at the end of my run was a huge mass of flesh that kept spawning bubbles that eventually blow up, scattering small bullets in all directions. To defeat Meat Sack, I had to pay close attention to its movements and carefully destroy a majority of the bubbles before they made movement a nightmare. It was a tough fight. And it shows the intensity of the bullet hell aspect of the game. Killing it also ends the demo.

I’m really liking what this demo was showing me. Not only was I engaged the whole time, but the fear of dying is a strong motivator for me to be at my best. The margin for error is kind of tight. That’s to be expected for the genre. The upgrade system isn’t too bad as well. You don’t feel like you’re always out of money, but that’s more to do with performance rather than the game being generous.

If the game can keep up the pace post release, I can imagine it finding success as a run and gun shooter with a bit of an edge to it. The mechs are a great selling point, but let’s be honest, it’s the cats that’ll be the deciding factor for this game’s success. (I jest, but don’t knock it till you try it, right?)

Look forward to Wildcat Gun Machine as it nears release sometime before 2021 closes. For more information about the game, check out our previous article about the game’s announcement.

The demo is still on going for the duration of Steam Next Fest, and ends on Oct. 7th, 2021. You can also wishlist the game on Steam right now.