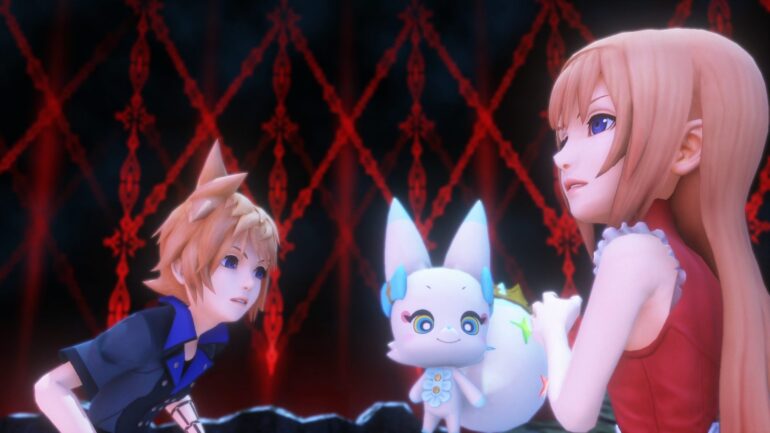 World of Final Fantasy is a game filled to the brim with nostalgia. It is loaded with locations, monsters, and NPCs that have been in a Final Fantasy game in one way or another. While you would think that this makes the game appeal solely to fans of the franchise, you wouldn’t be more wrong. In standard Final Fantasy fare, this game is very different from the other Final Fantasy titles and can be picked up by anyone, regardless of history. 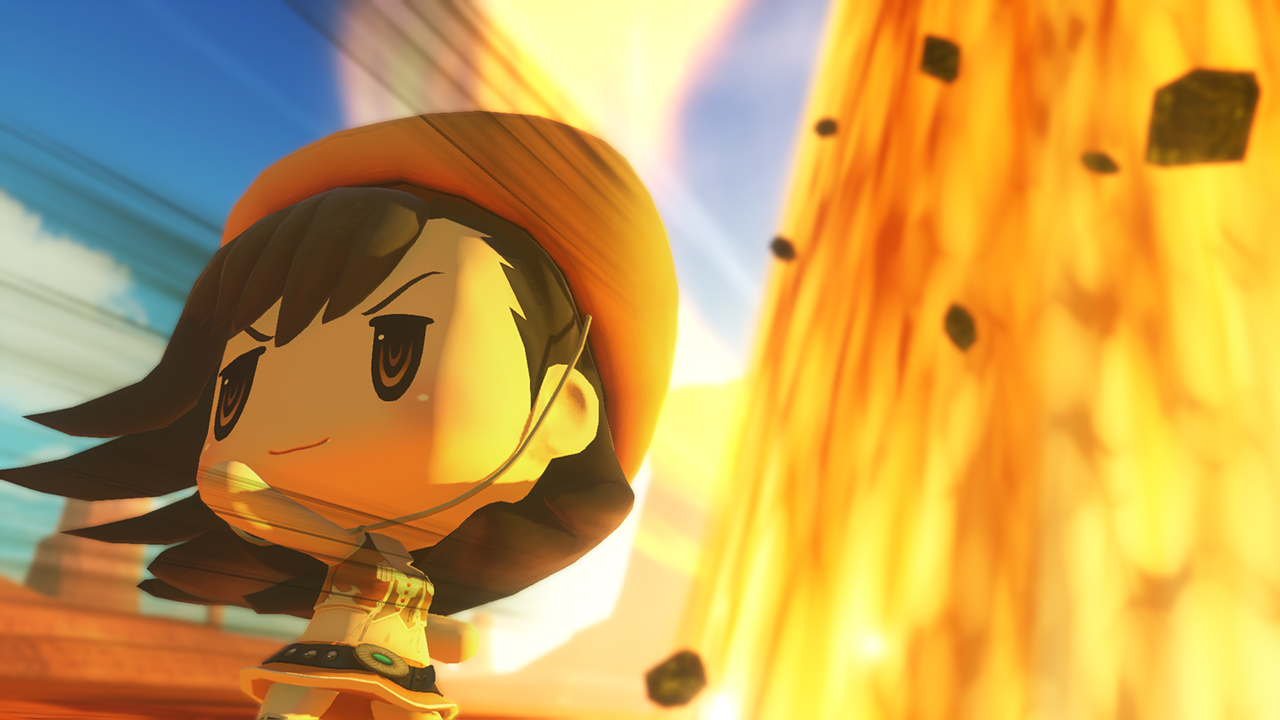 In World of Final Fantasy, you control both Lann and Reynn, fraternal twins who are largely oblivious of their greater past. Lann is, by all accounts, a duffus which makes Reynn the brains of the group. They are accompanied by Tama, a fox-like creature that was sitting on Lann’s head since the start of the game. An adorable thing but he enables Lann’s craziness which can sometimes lead to frustrating situations for Reynn. Dialogue between the 3 characters is riddled with puns. Some good, most bad, but it’s how the 3 interact with each other that makes the puns bearable.

They are soon informed by a mysterious stranger that they are Mirage Keepers from the world of Grymoire. Mirages are Grymoire’s monsters, and a Mirage Keeper is a person who can capture and control mirages naturally. The twins were apparently great Mirage Keepers and had an army of mirages under their command. Something happened to the twins that stripped them off of their mirages and memories, and they must now take a journey into the world of Grymoire to reclaim your lost mirages and investigate your past.

The world of Grymoire is populated by two types of people: the common Lilikin and the rare Jiants. Jiants are what we would call normal-sized people and in this world, Lann and Reynn would be classified as such. Luckily, Erna Kross, the mysterious stranger previously mentioned, gave you the ability to switch between Lilikin and Jiant forms at will so they won’t attract too much attention in Grymoire. 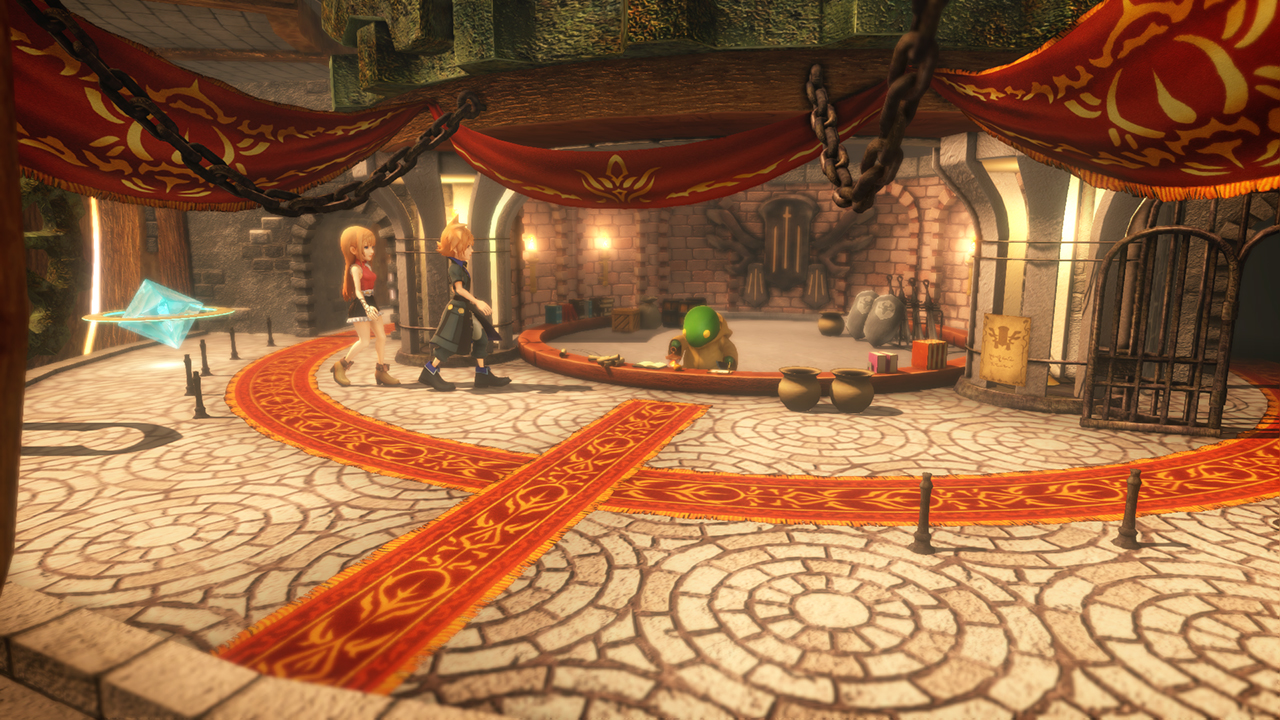 The capture system in World of Final Fantasy is very unique. Capturing a mirage is called ‘imprisming’ them. To do that, you need to trigger a prismtunity, or a prism opportunity. Most mirages prismtunity can be triggered by a normal attack but some mirages will only trigger when hit with a specific element, afflicted by a specific status, or even given an item. Once prismtunity is triggered, you will then need an item called the prism. These are little transparent boxes that are specific to each mirage. Let’s say you want to capture a Chocobo but you don’t have a Chocobo Prism, then you can’t capture one until you get a Chocobo-specific prism. While this system seems frustrating, Erna Kross actually gives you the mirage-specific prism when you encounter a new mirage.  There is also little need to capture more than one version of a mirage. This is because a mirage’s stats are universal unlike other monster capturing game where every monster is unique.

Mirages come in a variety of sizes. 4 in fact. That would be small, medium, large and extra large. This is because of the party/equipment system in World of Final Fantasy implements. This system is called Stacking. Lann and Reynn can each bring 2 mirages each into battle and they can stack on top of each other. When they do so, health, defense, attack and other stats combine. Instead of having 6 weak party members, you have 2 very powerful ones. Outside stat bonuses, stacking can also improve magic and unlock combo attacks. For instance, Lann and a Melee mirage when stacked together can do a cross strike, or when two characters with fire magic stack together they unlock Fira. There are countless combinations and it is up to you to experiment and find the best stack for you.

Stacking has a very simple rule: small on top of big. This basically means that you can’t stack a large mirage on top of a medium or small one. It must always be Large > Medium > Small. This is where the Jiant and Lilikin forms come into play. When you don’t have a large mirage at your disposal, Lann and Reynn can fill those roles by being in their Jiant forms. This is my first problem with the game. Not only do Jiant stacks look stupid in comparison to Lilikin stacks, there is also little benefit to switching forms later on the game. Not only are combo attacks available to you when the bottom most slot is occupied by mirages better than what Lann and Reynn have to offer, it also is a more appealing form to look at compared to when Lann and Reynn are the bottom. I found myself almost always using the Lilikin forms. The only use I have found for the Jiant stack setup is having them as a back-up in case I am at an elemental disadvantage. 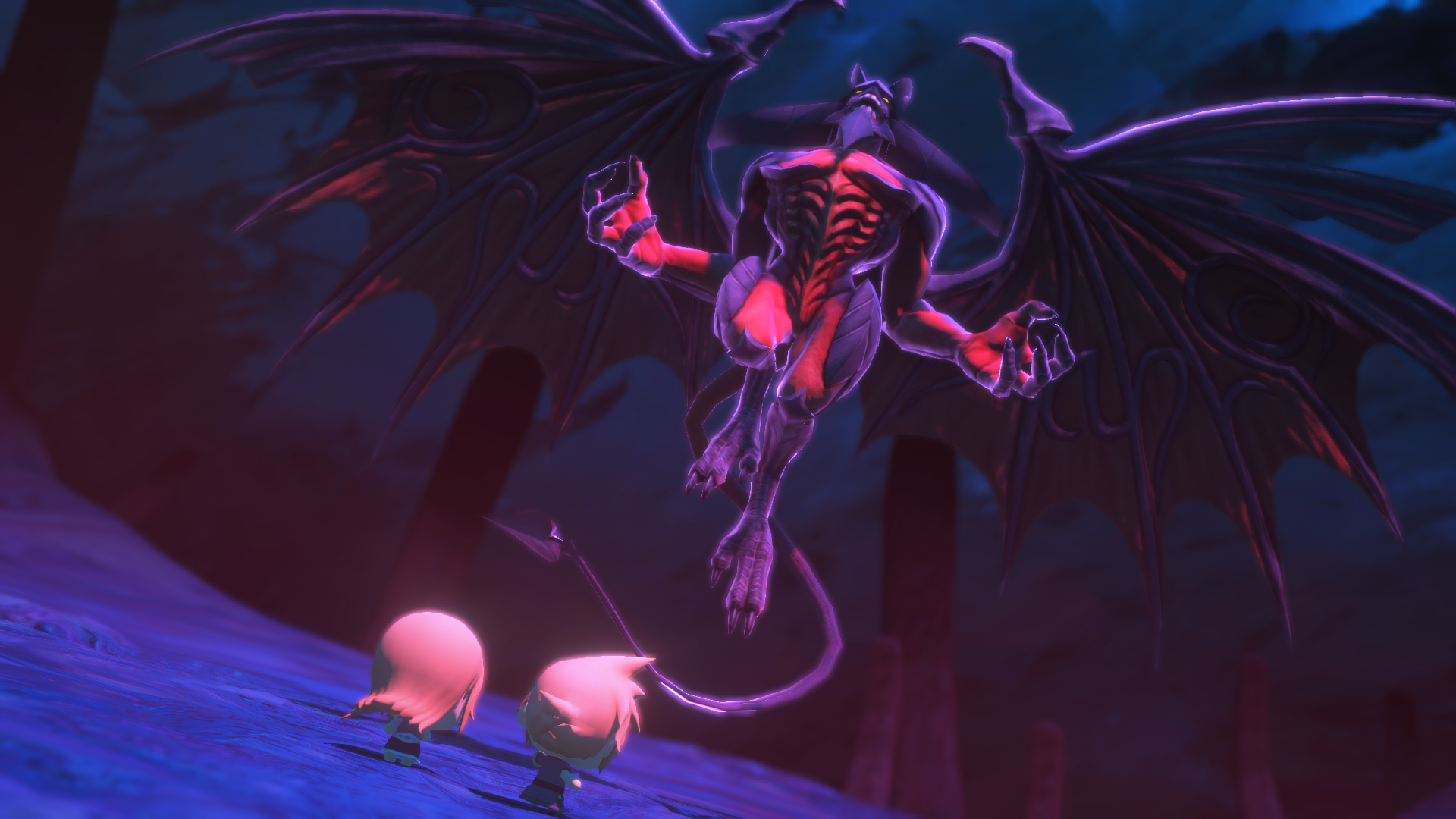 If you haven’t noticed by now, I have yet to mention the extra large mirages. These mirages are so big and powerful that it takes the combined powers of Lann and Reynn to even summon one into the field. Similar to FFX’s Aeon system, summoning an XL Mirage removes all other mirages from the field. They are incredibly powerful but Lann and Reynn can only maintain them for so long. Outside of XL mirages, you also have the opportunity to summon Champions. These are Final Fantasy characters you encountered in your journey who are considered champions. You can call upon their powers to aid you in battle. Unlike the XL mirages, they are there for one powerful attack. This is akin to the summon system of older FF games albeit summoning people instead of monsters.

The combat system is your standard Active Time Battle (ATB) system. The major difference would be the ability to choose basic and classic. Classic is what we are all familiar with. This is the menu grid where you can choose to attack, use an item or ability and many more. Basic is a simplified version of that. You can assign abilities to specific shortcuts. The only drawback from the basic system is that you don’t choose who to attack. When you want to focus on a specific monster, you have to do it in classic. It is a very intuitive system and saves a lot of time you would have spent navigating the menus. This is especially useful since encounters in WoFF seem to take forever. The delay between the hit and the attack animation is about 1 second. Even when you set the battle speed to maximum, it still feels like a crawl. Luckily the game allows you to Fast Forward the game with the R1 button.

Now, WoFF is a huge game. While it feels like a linear experience, it is actually filled with content. You will find yourself going back to areas you already visited to clear off the Murkrifts and collect mirages you might have missed. Murkrifts are special encounters that are more powerful than the standard mirages in the area. It will take some time to level up before you are ready to fight them. Outside Murkrifts, there are hidden areas the dungeons that can only be accessed if you have the correct mirage for the job. After meeting Final Fantasy characters throughout your travels, you can then “intervene” in their lives. This serves as little story segments that flesh out the world of Grymoire. There is also the Coliseum location where you can fight to gain items and gil. There are also Coliseum specific storylines so it is best you get on that as well. 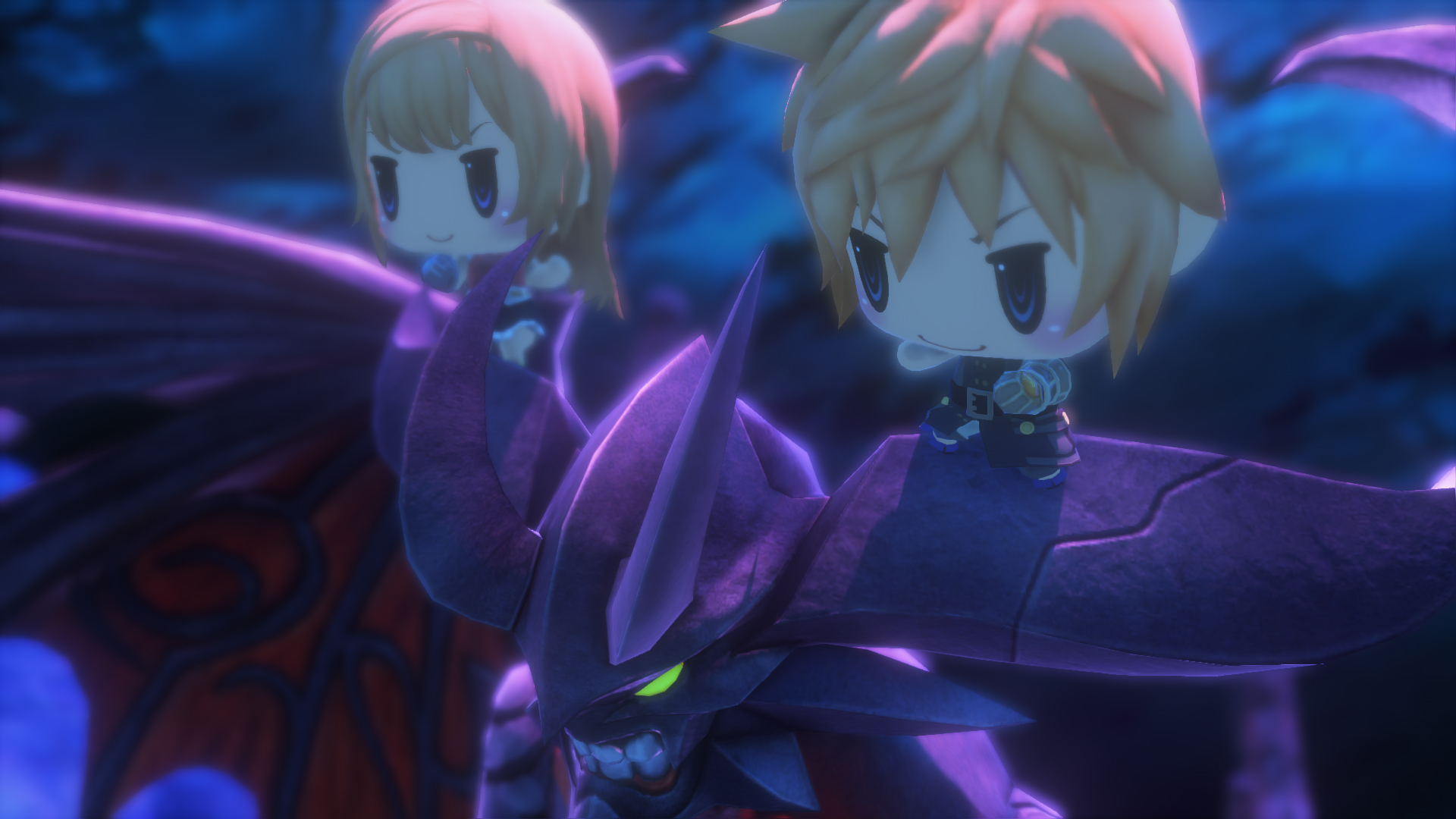 World of Final Fantasy is far from a perfect game but it is an enjoyable experience. Some of the fans might not enjoy the light-hearted tone and cutesy design of WoFF, and feel like it is a departure from the serious and realistic direction many of the main-line FF titles have strived for; but I say this game embodies the wonder of a Final Fantasy game. It is actually a great way to introduce your child or younger siblings to the “World of Final Fantasy“.

This review is based on a review copy provided Sony Interactive Entertainment.