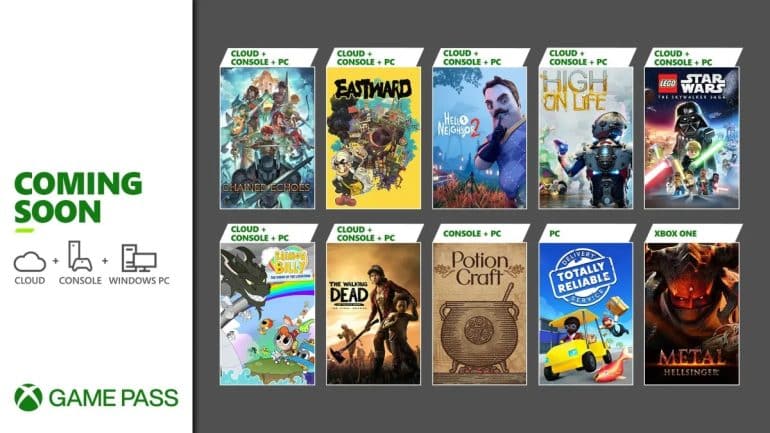 New month, a new lineup of free games to enjoy with the Xbox Game Pass. Three of these games are available starting today while the rest will be released in the coming days. The lineup includes simulators, narrative driven titles, beat em’ up, horror, and a title that involves guns, demons, and rock and roll music.

Eastward – This game is out now on PC, Cloud, and consoles. Eastward is a beautifully detailed and charming adventure game, from Shanghai-based indie developers, Pixpil. Society is going to collapse and the human population is at an all-time low but a miner and a mysterious young girl hope to go outside the world to find a thriving society and escape the madness.

The Walking Dead The Final Season – Out today on PC, console, and Cloud. It follows the story of Clementine and AJ’s lives as they find a new safe haven, for the moment. In order to protect it, it will mean sacrifice.

Totally Reliable Delivery Service – Available on PC. Players take on the role of a delivery guy and his ever trusty delivery truck. Play together up to three friends and try to finish a job in an interactive sandbox world.

LEGO Star Wars The Skywalker Saga – This game launches on December 6, 2022 and available on PC, console, and Cloud. Experience the whole Skywalker Saga in LEGO form! Players can take on roles of the Jedi, Sith, heroes, villains, and many more. They can also ride the various vehicles from the whole Star Wars franchise, use various lightsabers, different types of guns, and many more.

Hello Neighbor 2 – The game will be available on December 6, 2022 on PC, console, and Cloud. Find out the secrets of your creepy neighbor by going into his house and trying to not get discovered by hiding in places you would not be seen. A fair warning though, your neighbor will adapt to your patterns and might change their behavior.

Chained Echoes – Get this story-driven JRPG on December 8, 2022 on PC, Cloud, and console. It will also be available on day one with Game Pass. Valandis is at war. The three kingdoms have been fighting for centuries. Peace seems to be no option. And yet, a magical weapon of mass destruction leads to a fragile one. One, which won’t last.

Metal Hellsinger – Play this crazy rhythm FPS on December 8, 2022 for Xbox One. Use powerful weapons with metal music against diabolical enemies in a crazy adventure where you fight your way through eight Hells.

High on Life – Available on December 13, 2022 on PC, Cloud, and console. Also available on day one with Game Pass. From the mind of Justin Roiland comes High On Life. Humanity is being threatened by an alien cartel who wants to use them as drugs. It’s up to you to rescue and partner with charismatic, talking guns, take down Garmantuous and his gang, and save the world!

Potion Craft – Launches on December 13, 2022 on console and PC. A good alchemist simulator where players interact with tools and ingredients to brew potions. Invent new recipes, attract customers, and experiment.

Hot Wheels Unleashed – Game of the Year Edition – Not launching on December 15, 2022.

Rainbow Billy: The Curse of the Leviathan – The game launches on December 15, 2022 on PC, Cloud, and console. It is a wholesome, creature capture, 2.5D adventure puzzle platformer with over 30 hours of gameplay.

These titles will leave the game library on December 15, 2022.