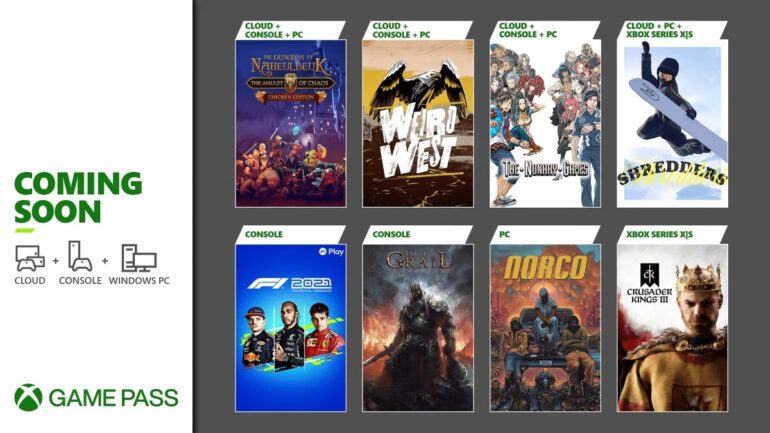 Microsoft has recently revealed the new titles that will be included in the Xbox Game Pass March 2022 game lineup.

Xbox Game Pass subscribers will be able to download eight new titles starting on March 17, 2022 for PC, Xbox One, and Xbox Series X/S. It includes an extreme sport, a challenging tactical RPG, roguelike game, a racing game, and more.

Shredders will be available starting on March 17, 2022 for Cloud, PC, and Xbox Series X/S. It will also be available on day one with Game Pass. Play a snowboarding game in style, enter a snowboarding event of the year in the hope of scoring a wildcard entry to an exclusive invitational, and more. A snowboarders’ dream game.

The Dungeon of Naheulbeuk: The Amulet of Chaos launches on March 17, 2022 for Cloud, Console, and PC. Go on an adventure with a team of unlikely and clumsy heroes and enjoy humor, surprises, and silly encounters. Lead them in this epic and challenging tactical RPG.

Tainted Grail: Conquest will be available on consoles starting March 22, 2022. It is now available with PC Game Pass and now coming to consoles next week. Explore the cursed island of Avalon and go through ever-changing maps, fight dangerous monsters, and discover the secret behind it in this unique deck-building roguelike and RPG game.

Zero Escape: The Nonary Games is coming to Cloud, console, and PC starting on March 22, 2022. Players will be taking on a role of one of the people that get kidnapped and forced to participate in a dangerous game of death. Trust no one and overcome the pressure to get out of The Nonary Games.

Norco will launch day one with PC Game Pass on March 24, 2022. A point-and-click narrative adventure where players explore the sinking suburbs and verdant industrial swamps of a distorted South Louisiana. Blake, your brother, has gone missing after your mother’s death and now you must follow a fugitive security android to find him.

Crusader Kings III for Xbox Series X/S launching on March 29, 2022. This is also now available with PC Game Pass. Live the life of a medieval ruler and rule the kingdom in your own way. Increase power, build more towns, learn politics, betrayals, negotiations, and more.

Weird West is coming to Cloud, console and PC on March 31, 2022 and on day one with Game Pass. It is a dark fantasy reimagining of the Wild West where lawmen and gunslingers share the frontier with fantastical creatures. They have their own rules and motives.

Here are also the titles that will be leaving the Xbox Game Pass library soon. Check the list: