Free games for the rest of the month! 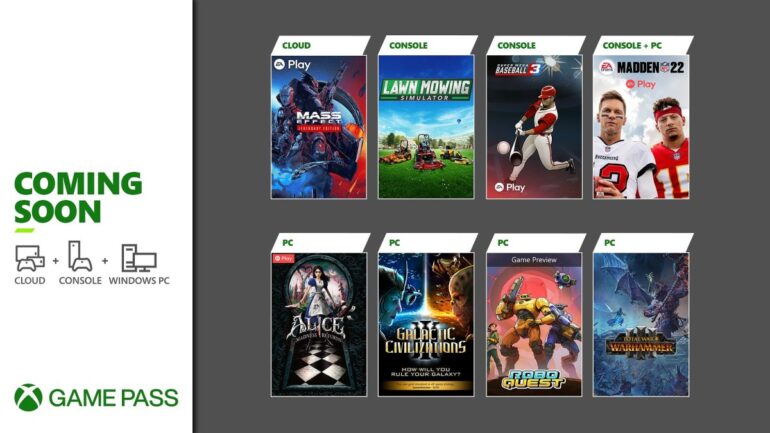 Microsoft has announced the next set of free games coming to the Xbox Game Pass for Mid-February 2022.

The newest titles coming to the Xbox Game Pass library are some titles coming from EA and others as well. There will be eight new titles that will get added to the game library in the next few days with one already available today.

Mass Effect Legendary Edition will be available today with Xbox Cloud Gaming via EA Play. This will have the single-player base content and over 40 DLCs from the trilogy of games.

Lawn Mowing Simulator will be available on Xbox One on February 17, 2022. It is already available on PC and Xbox Series X/S. Mow the lawns of the Great British countryside with this unique simulator.

Madden NFL 22 will be launching on PC Game Pass and Ultimate via EA Play this coming February 17, 2022. It will also be available on consoles on the same day. It offers recurring EA Play member rewards like Ultimate Team Packs and gear sets for The Yard.

Total War: Warhammer III will be available on day one with PC Game Pass this coming February 17, 2022. This is the conclusion to the Total War: Warhammer trilogy. Gather your forces and fight against the agents in the Realm of Chaos. You can also command those Daemons for your own benefit.

Roboquest will be available on PC this coming February 22, 2022. This is a fast-paced FPS roguelite game that can be played solo or co-op. It is set in a scorched future world where players have to fight against hordes of deadly robots in high octane gameplay.

Galactic Civilizations III will be available on February 24, 2022 for PC. Players will build civilizations that will stand the test of time and conquer the galaxy. They can choose from different races and try to win via diplomacy, technological advances, and more.

Xbox One and Xbox Series X/S owners will be able to play Super Mega Baseball 3 on February 24, 2022 via EA Play. This is a baseball simulator best for those who are new to the game and also for professionals. This is the third entry of the series and offers new features like Franchise, Online Leagues, and more.

Come back to the mad world of Alice in Alice: Madness Returns on PC this coming February 28, 2022. It delves deep into the dark and violent side of imagination, creating the nightmarish Wonderland. Alice must confront her worst demons in this world.

There are four titles that will be leaving Xbox Game Pass on February 28, 2022. Purchase them with the membership discount to save up to 20 percent to keep them permanently in the library.