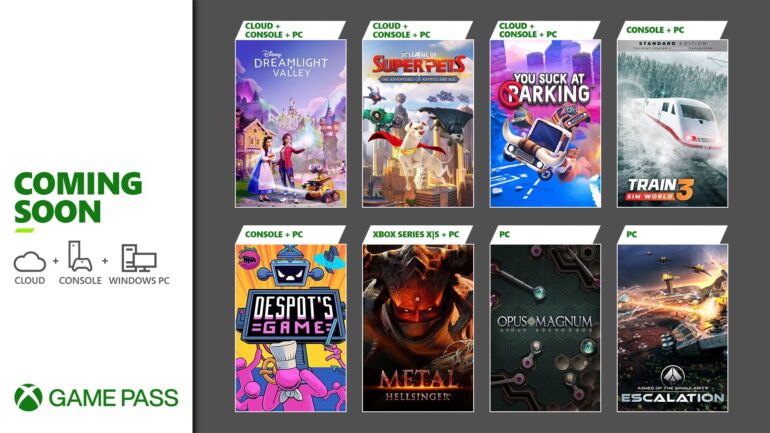 According to the newest announcement on Xbox Wire, there will be eight new games that get added to Xbox Game Pass for the first half of September 2022. It includes games that feature Disney characters, a super dog, solving puzzles, managing train stations, and more.

Disney Dreamlight Valley: Founder’s Edition is now available on Cloud, console, and PC. It is also available on day one with Xbox Game Pass September 2022. Dubbed the Disney Animal Crossing by fans, the game is now out on Game Pass on day one with a lot of perks for members. This is a hybrid between a life-sim and adventure game rich with quests, exploration, and engaging activities featuring Disney and Pixar characters, both old and new. Get the game in early access with exclusive cosmetic rewards, and in-game currency.

Opus Magnum is out now on PC. Made by Zachtronics, it is an open-ended puzzle game where players would have to master intricate, physical machinery of the transmutation engine to create vital remedies, deadly weapons, and more.

Train Sim World 3 is now available on PC and consoles and available on day one with Xbox Game Pass September 2022. Manage three highly detailed routes and learn the controls of the nine-powered locomotives. Weather out the extreme weather with the new dynamic weather system, new lighting system, and more.

Ashes of the Singularity: Escalation will be available on September 13, 2022 for PC. This is a massive-scale real-time strategy game where players have to command entire armies on a battlefield. Conquer worlds across several single-player campaigns.

DC League of Super-Pets: The Adventures of Krypto and Ace launches on September 13, 2022 for console, PC, and Cloud. Play as the popular super-dogs Krypto and Ace in order to uncover the secrets of Lex Luthor and stop his evil plans to pet-nap strays.

You Suck at Parking launches on September 14, 2022 and day one with Xbox Game Pass September 2022 for PC, Cloud, and console. It is a game about parking vehicles and at an extreme version. It is a racing game where the goal is to stop. It has all the physics and players must use every trick in the book like driving, drifting, jumping, and more in order to go through tricky courses. Collect cards, learn new mechanics, and customize your ride.

Despot’s Game will be available on day one with Game Pass on September 15, 2022. It is a rogue-like tactics army battle where players have to guide them through procedural dungeons to fight enemies and other players.

Metal: Hellsinger launches on Game Pass on day one on September 15, 2022 for PC and Xbox Series X/S. A rhythm FPS that can kill demons by riffing with the music. And not just any music, it is METAL MUSIC.

The following games will be leaving Xbox Game Pass on September 15, 2022. Get them with discounts of up to 20 percent.