Four new titles on the way! 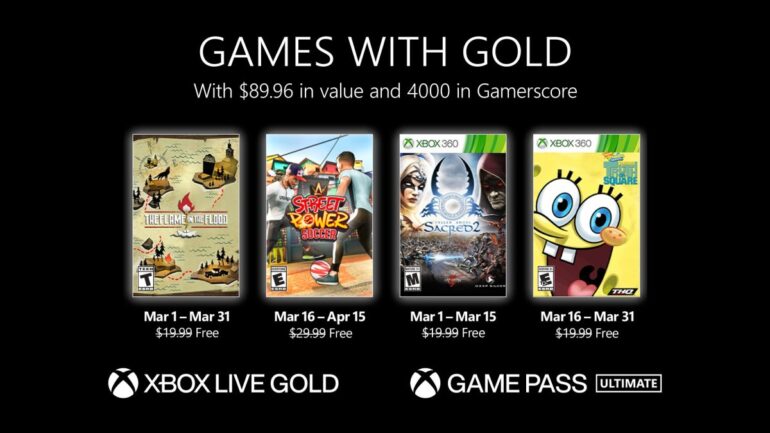 Microsoft has now revealed the Xbox Games with Gold for March 2022 which includes four titles.

There are four games to enjoy for free with the Xbox Games with Gold subscription. On the Xbox One and Xbox Series X/S, members can try out The Flame in the Flood and Street Power Soccer. For the classic lineup via backward compatibility feature, play Sacred 2 Fallen Angel and SpongeBob’s Truth or Square.

The Flame in the Flood will be available on March 1 until March 31, 2022. It tells the story of a girl and her dog in a journey through the forgotten post-societal America. Gather resources, craft tools, remedy afflictions, evade vicious wildlife, and survive.

Street Power Soccer will be available starting March 16 and will end on April 15, 2022. Play soccer in a totally different way with over-the-top game modes, soccer superpowers, and more.

Sacred 2 Fallen Angel will be available starting March 1 until March 15, 2022. Choose between Light or Shadow campaigns to help heal the land of Ancarcia or become the cause of its destruction. Play solo or multiplayer with tons of quests, characters, adventure, and combat.

SpongeBob’s Truth or Square can be accessed on March 16 until March 31, 2022. In this game, SpongeBob somehow lost the Krabby Patty secret formula. It is up to him and his Bikini Bottom friends to retrace his steps and look for the lost formula.