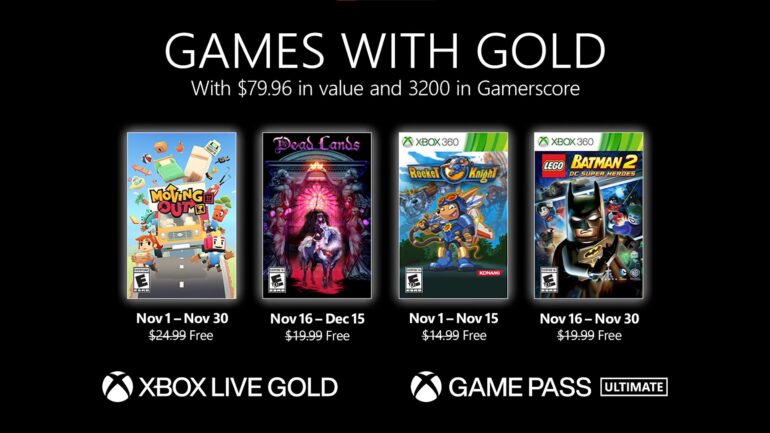 Microsoft has officially revealed the new Xbox Games with Gold November 2021 and it includes kingdom building, a hero with a rocket, and a DC hero in Lego form.

There are four games coming to Xbox Games with Gold for next month and they are coming to both Xbox One and Xbox Series X/S. These games are Moving Out, Kingdom Two Crowns, Rocket Knight, and Lego Batman 2 DC Super Heroes.

Moving Out will be available on November 1 until November 3, 2021. Players will be taking on the job as the Furniture Arrangement and Relocation Technician or F.A.R.T for short! As part of the Smooth Moves company, your job is to save a town from furniture peril. You can play solo or join with four more friends to play this ridiculous simulator of moving furniture.

Kingdom Two Crowns will be available starting November 16 until December 15, 2021. You will be building your kingdom and exploring new lands in this game becoming a monarch who is on top of it all. Protect your realm against the dangerous and powerful Greed.

Rocket Knight launches on November 1 until November 15, 2021. The hero was a fan-favorite from the classic Sega-era Sparkster series and now it has come to modern days after 15 years. Fight against the menacing wolf army that has decimated the kingdom of Zephyrus and protect the people that have survived.

Lego Batman 2 DC Super Heroes will be available on November 16 until November 30, 2021. Players will be joining the Dynamic Duo together with other famous DC heroes like Superman, Wonder Woman, and more to save Gotham against Joker and Lex Luthor.