Yakuza: Like A Dragon Reveals More Information On More Jobs 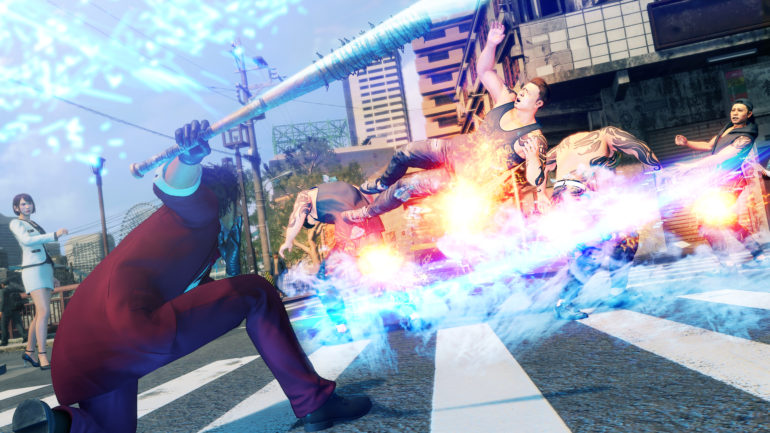 There are two jobs that have been detailed, which are the Bodyguard and the Host. They also revealed new information on the Just Action system and new battle techniques.

Check them out here:

“Bodyguard” and “Host” are jobs that protagonist Ichiban Kasuga and male party members can change to at Hello Work in Isezaki Ijincho, Yokohama. Each job drastically changes the character’s battle style and skills.

An attack-type job that wields a katana. Its sword-type attacks have a fixed chance of inflicting the “bleeding” status ailment, which causes additional damage with each turn.

Fights wielding a sake bottle. It has a number of tricky skills including an attack that shoots ice-cold sake at the enemy and inflicts the “cold” status ailment, supporting party members with exciting calls, and “charming” enemies to make them unable to attack. The “cold” status ailment may cause the enemy to catch a cold that deals additional damage with each turn. However, be careful as party members who get close to that enemy may also end up catching a cold.

Shoots ice-cold sake in the face of the enemy. Also inflicts the “cold” status ailment.

Many Kiwami Skills are equipped with an element called “Just Action.” Like the series’ mainstay “Heat Action” element, Just Action implements action-based controls such as button mashing or timed inputs, with successful inputs resulting in greater damage dealt to the enemy.

Also, by pressing the X button at the right time just before an enemy attack hits you, you can put up your guard and reduce the damage received.

Destroy tough enemies with successful Just Actions that offer the thrill of an action game in a command-based RPG.

Here is a look at the Just Action-equipped Kiwami Skills for each character’s exclusive jobs.

Kasuga’s starting job, “Permanent Part-Timer,” is the only job in the game without a weapon, relying solely on its fist to fight in a brawler battle style. “Full-Strength Punch” is a Kiwami Skill that the Permanent Part-Timer can learn from the beginning, and has a fixed chance to downing the enemy. If the Just Action is successful, you can deal extra damage to the enemy.

The next job following Kasuga’s starting job Permanent Part-Timer job is “Hero,” which fights wielding a bat. The Kiwami Skill “Mega Swing” is a convenient skill that damages a wide range of enemies. If the Just Action is successful, it will deal even greater damage.

Namba’s exclusive job “Homeless” has various skills. The Kiwami Skill “Mystery Joujutsu” is a consecutive attack skill using an umbrella and cane. If the Just Action is successful, even the powerless Homeless job can deal great damage.

Adachi’s exclusive job “Detective” fights with a powerful battle style. The Kiwami Skill “Reckless Strikes” is a series of consecutive attacks that strikes the enemy with a baton. If the Just Action is successful, the number of attacks will increase.

Saeko’s exclusive job “Junior Mama” fights wielding a handbag. The Kiwami Skill “Handbag Wind” is a spin attack that utilizes the weight of the handbag. Since it deals damage to a wide range of enemies, it is optimal when surrounded by enemies or in a narrow space. If the Just Action is successful, its attack power will increase, rounding up a group of enemies in a single blow.

In a live command RPG, it is essential to utilize the battle situation when determining how you fight, including the state of the city, enemies’ positioning, and so on that change in real-time. Here are two new battle techniques you can utilize in addition to the previously introduced signs and bicycles.

A technique that, by blowing an enemy back and hitting them against other enemies, can deal additional damage to the enemy, as well as deal damage to all enemies involved. How the enemy gets blown back differs for each Kiwami Skill, so use this technique properly according to the situation.

Hit by a Car