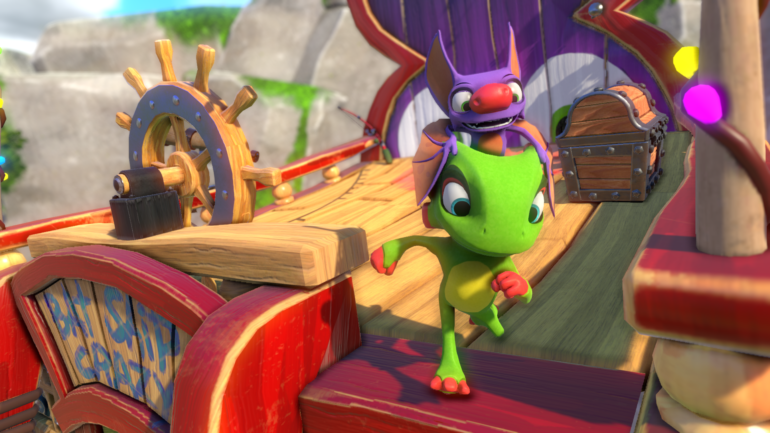 Playtonic and Team17’s latest platformer, Yooka-Laylee, is probably the best platformer I’ve played in years. I know you’ll wonder how the dynamic lizard and bat duo caught my attention when some major critics have scored the game a 6/10, and even a 2/10. It’s simple, the number of hours I have spent in Yooka-Laylee’s world was enjoyable at best.

You may not agree, but Yooka-Laylee is one of those puzzle-platformer adventure titles that gives sarcastic humor which makes everyone laugh and amused.

If I remember it right, Ratchet & Clank is the last platformer title I’ve played. And for full disclosure, I haven’t played Banjoo-Kazooie or any sequels of this franchise yet. So don’t expect too much comparison with Yooka-Laylee’s spiritual predecessors. 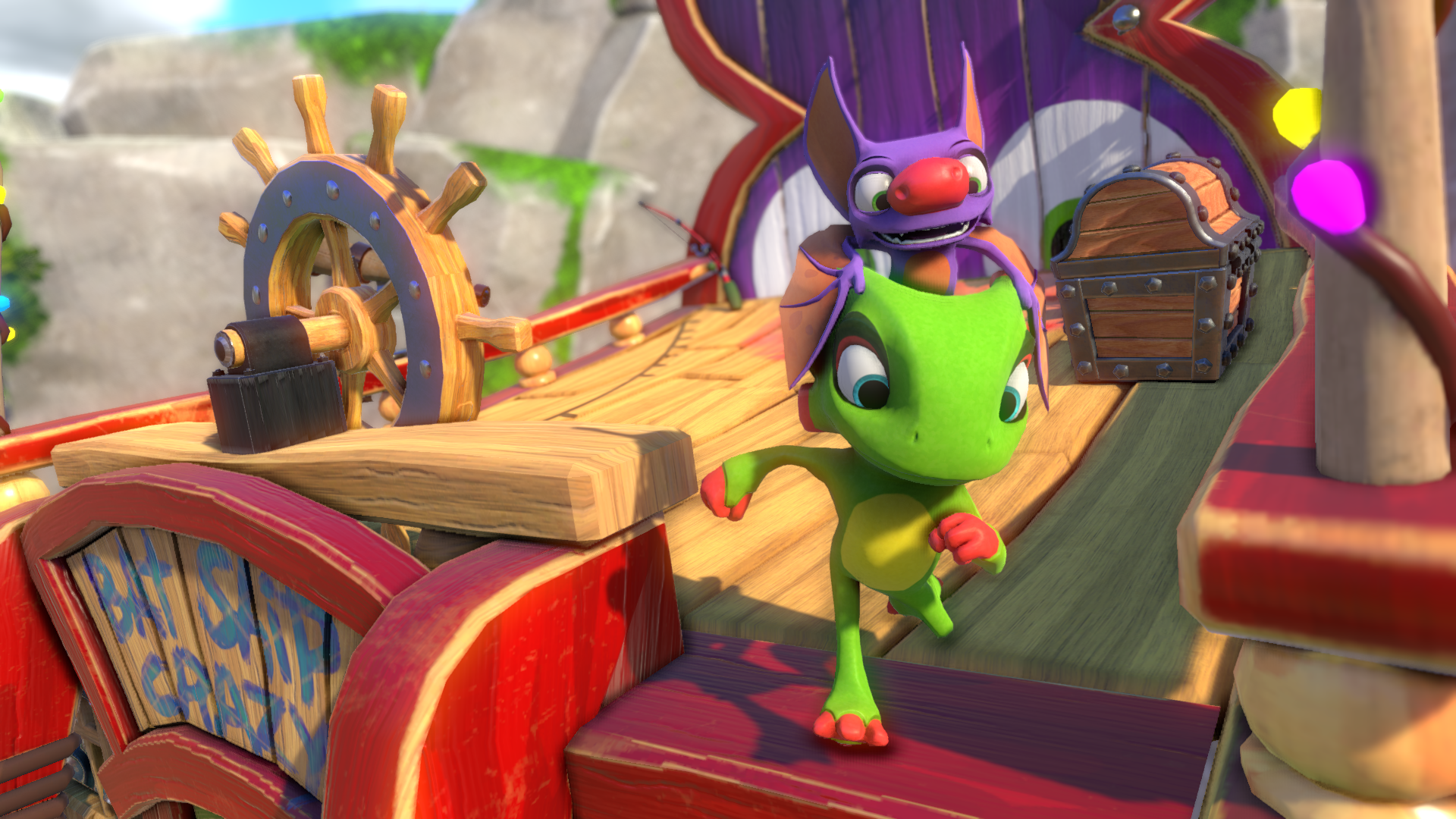 Your little green and violet friend is set to recover the book they found in a wrecked pirate ship. It holds the key to control the whole universe. The Hivory Company, headed by your one and only Capital B (who is technically a bee who looks like Gru from Despicable Me), invented a machine that would suck all books in the planet to eliminate competition. However, Capital B has an eye for the “special” book that Yooka and Laylee found. While the special book was getting sucked by that huge vacuum contraption, the magical pages managed to get out from the book. And it’s up to Yooka and Laylee to recover these pages from magical places that would amaze them and the player altogether.

As what other platformer adventure games have, the plot is not too taxing to follow, and it’s not the highlight of Yooka-Laylee. What made my journey enjoyable in this unique world was its dialogue and the frustrating puzzles, not its narrative. Laylee, Yooka’s bat companion, has her own moody side that occasionally… wait, not occasionally, but frequently says sarcastic lines especially to the merchant snake who sells you “moves”, Trowzer. Yooka, on the other hand, is the one lizard you will find optimistic and nice throughout the entire game. He may spurt out some corny lines, but for every gamer out there, you will surely laugh with Yooka-Laylee’s bomb responses – which you can totally relate.

I definitely want to say that exploration is key when progressing in Yooka-Laylee. The game doesn’t spoon-feed you with maps, an objective marker, and entrance highlights but it does give you riddles and clues throughout places to recover Pagies and other collectibles. These Pagies are the magical pages of the special book that you need to get to unlock places and extensions. There are some puzzles that are impossible to solve when you don’t have the specific move required. In each world, you get approximately 2 moves which you can use in previous locations you’ve visited. You will need to gather Quills for you to buy these moves. When you get those 2 moves, you can hop on to another world until you beat the game without really expanding the worlds. 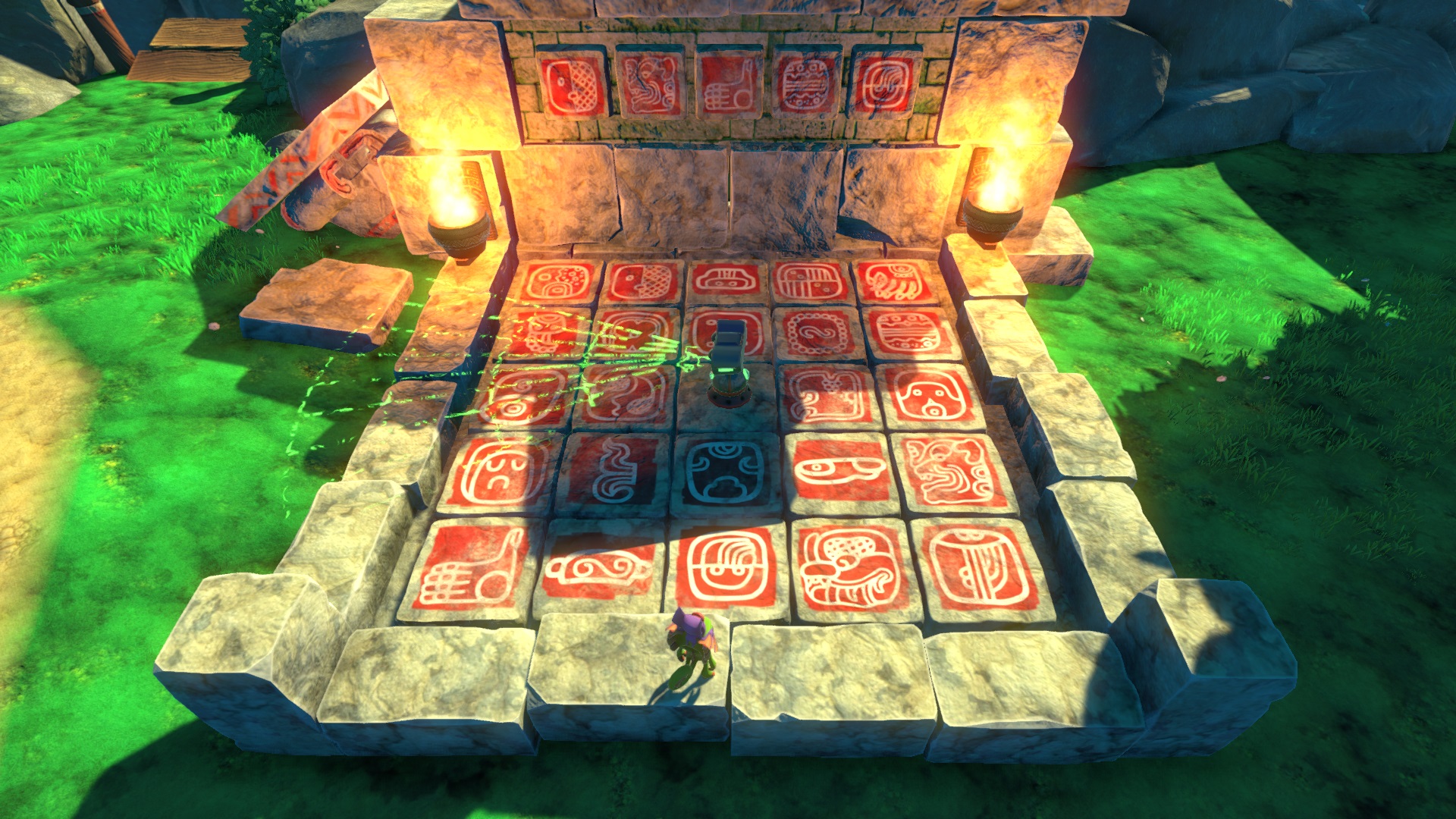 Aside from these so called moves, you also have these elemental materials you get from the plants like water, fire, and ice which also help for certain puzzles; and these elemental feats can be used in combat as well. There was one time where I had difficulty hitting the square button with the ice-ammo I got from plants. I thought the game was broken, but hell I was wrong. When I already gave up solving that intricate puzzle and went back to the hub, the Pagie that was still encaged told me that I can actually press the Left analog stick to aim. For almost an hour of frustration, I didn’t know if I would be furious or laugh the hell out. In the end, I was perfectly amused.

I love how Yooka-Laylee do boss fights in a unique way, especially with one boss that gives you a quiz that tests your retention skills. Players will have to be aware of some number of quills you get to spend for a move, the name of some characters, and also some sights you have to remember (photos will be shown as one of the questions). What’s also great about this mini-boss battles is when every time you get to restart the whole thing, random questions gets thrown to you. It’s not your typical “retry-get-the-answer-right” gameplay.

Mini-games by Rextro, the polygonal classic dinosaur character, can give a lot of players a bit of nostalgia. You have 8 mini-games you can play alone or with friends (up to 8 players locally). Each of these mini-games gives a lot of replayability and fun. Kartos Karting (racing) and Blag The Flag are the top two mini-games I find entertaining to play with friends. The shouts and hilarious moments we get are just memorable. I’m glad Team17 gave us pleasant side-games to hop into. 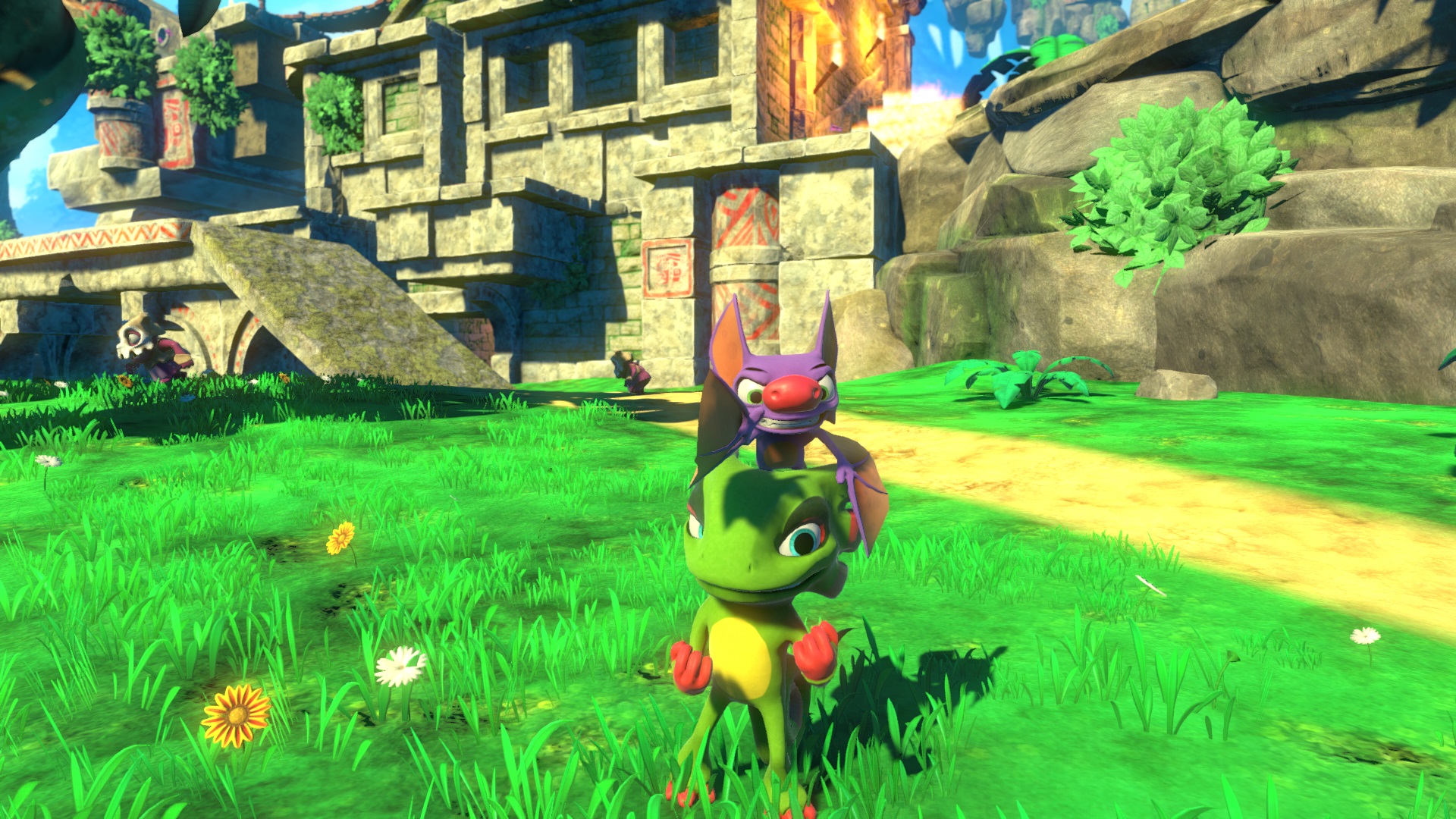 Yooka-Laylee is one beautiful platformer. The unique worlds put justice to the word “dazzling” and “pretty”. Each world has its locals and own theme like a tropical island, a snow kingdom, a smelly swamp, and a five star casino. The Glitterglaze Glacier is my favorite among all 5 worlds. The icy and cool atmosphere of Glitterglaze is a sight to see. You can even see Laylee’s face formed by the stars as a constellation in the sky. Nonetheless, it saddens me that a Photo Mode feature was not added, it would have been a lovely feature to showcase how spectacular the worlds are.

The depth of field is just amazing, blurring the background to give it a more in-depth visual. It makes Yooka-Laylee a next-generation 3D platformer graphically. However, I first played the game with 60 frames and it gave me a negative effect. I found myself dizzy, and decided to tweak the settings and ticked that 1/2 V-Sync box to get 30 frames. It might be the vibrant colors of the game, I don’t know, but I find my experience better with 30 frames on Yooka-Laylee.

Since the game is inspired and considered to be the spiritual successor of Banjoo-Kazooie, players who haven’t played Banjoo might think the gibberish voice-overs is a result of a lack of budget, no it’s not. Yooka-Laylee takes a lot of things from the Banjoo franchise, even the voice-over styles. It might sound gibberish, but it’s actually kind of cute. There are things in the dialogue that have double-meanings, but it’s up to you to interpret those. Putting voice-overs aside, the musical soundtrack is one soothing melody you get. The score perfectly fits the game’s atmosphere, especially with the worlds in Yooka-Laylee. 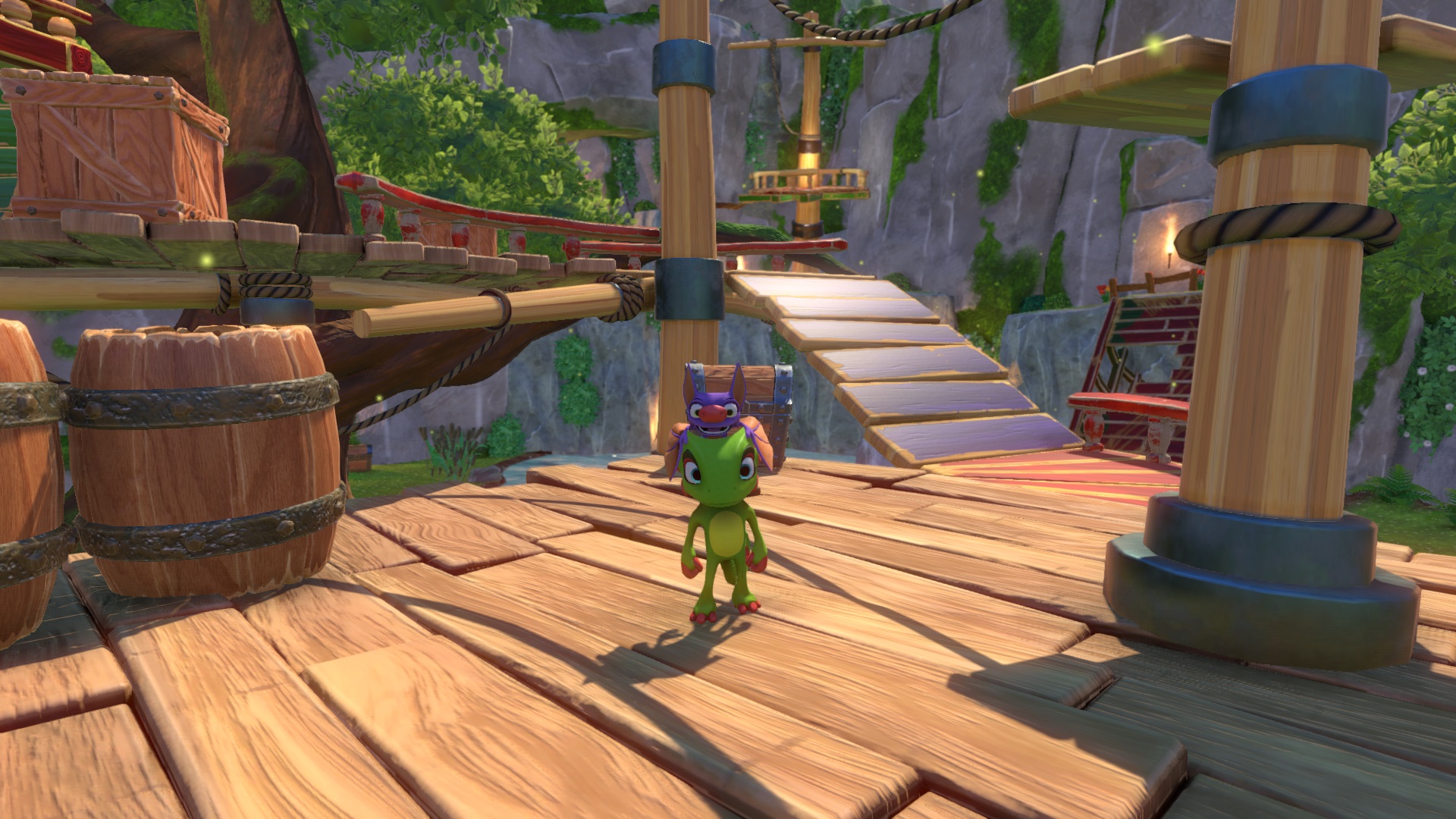 Critics have been complaining about the game’s camera movement on how it actually gets annoying, and difficult to even control at some angles. It seems like I got to experience those camera issues I had with genSTUDIOS’ The Last Guardian. There are places where your camera gets unresponsive, and that the angle makes it hard for you to jump at platforms. It gets tad aggravating, and I hope the patch that was announced by Team17 fixes these camera problems. I’m not sure if the patch rolled out (since according to Rock Paper Shotgun that it’s a pre-launch update) because the problem still persists.

Character movement can sometimes be slippery, especially at the Glitterglaze location where the ground is covered with ice. It’s hard to have Yooka speedroll at certain angles especially if the camera placement is getting in the way. But aside from that, the overall controls are smooth. You won’t have problems maneuvering while gliding, jumping, and aiming. It’s just that the camera is the main culprit of all disasters and accidents you will get.

In the technical side of Yooka-Laylee, especially that this is a version on PC, I am glad to say it’s optimized properly! The game is smooth as what you can get from any other PC ports. There was only one time when the game crashed after I switched the graphical settings from Fastest to Beautiful. I hardly get any frame drops on Beautiful (Ultra/Max) presets. We’ve been getting a lot of shitty ports on PC nowadays, but Team17 managed to get things right with the game’s optimization and stability. But I want to take note that Windows 10 GameDVR doesn’t work yet with Yooka-Laylee, so I used Bandicam to record some gameplay at meantime.

Even if Yooka-Laylee is inspired from Banjoo-Kazooie, since ex-Rare developers joined up with Team17, for players who didn’t get to play the aforementioned game will definitely enjoy this Banjoo-successor. The worlds you get to explore, the characters you meet, and how visually spectacular the game is, Yooka-Laylee is a platformer that you don’t want to miss.