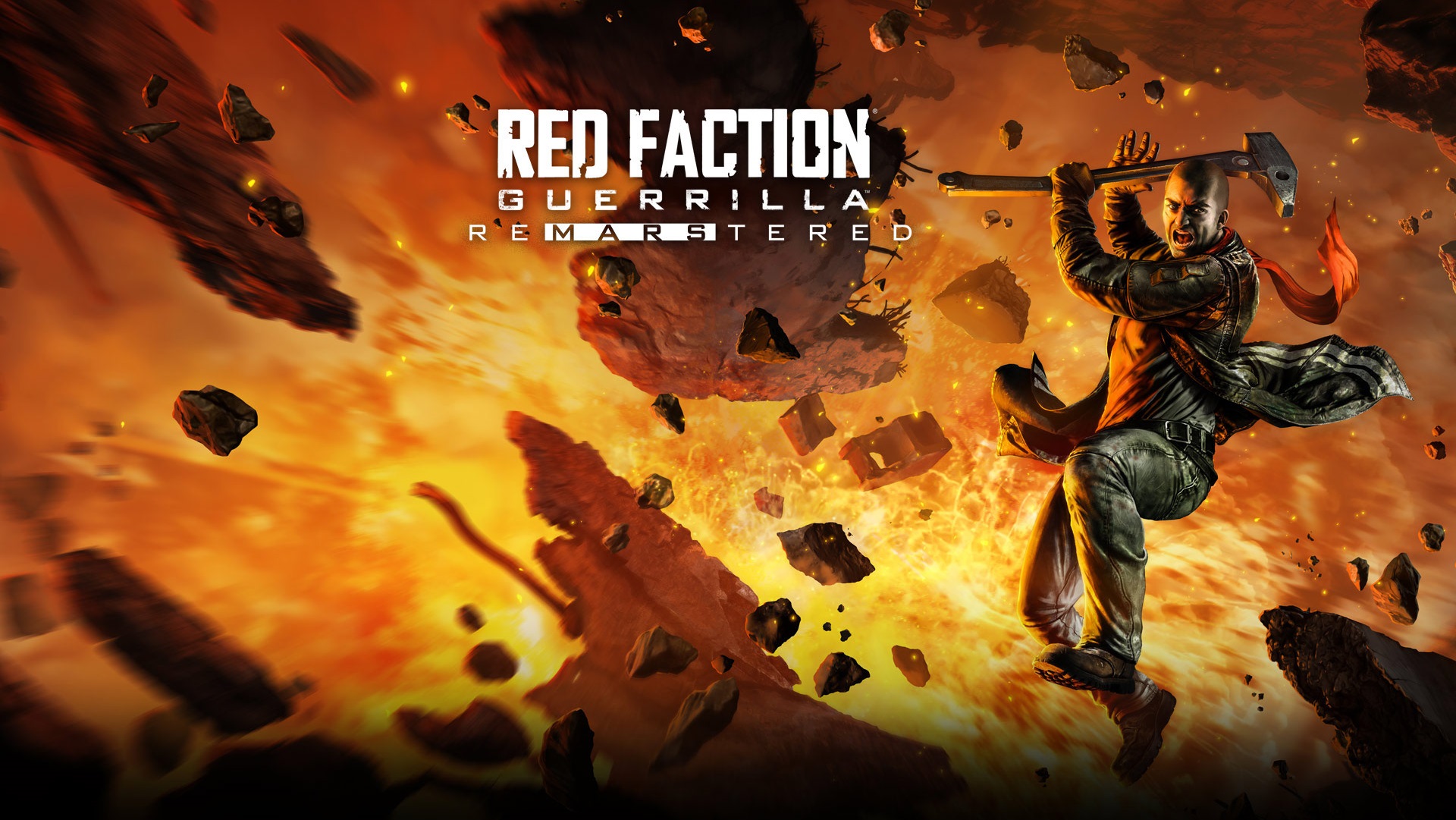 Welcome to the Red Faction! You are here one reason, and one reason only. To make the EDF suffer as much as you have suffered. Our enemy is formidable. We do not have we it takes to take them head-on. So, we must hit them where they least expect and run… to fight another day. For further inquiries, please consult your Guerrilla Handbook. And don’t forget your standard issue sledgehammer on your way out! 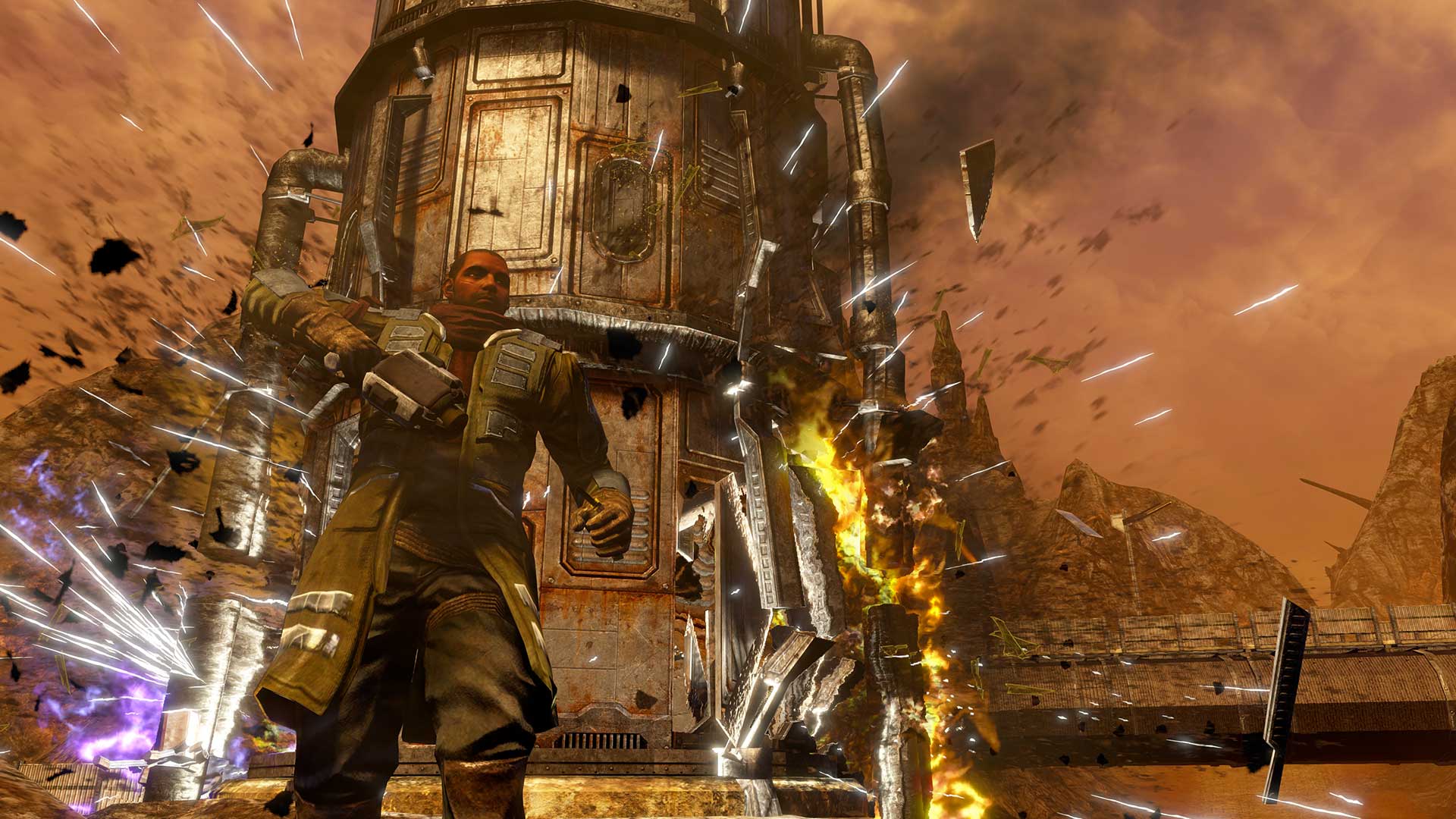 Red Faction: Guerrilla is a third person action game set in Mars. Players take control of rebel insurgent, Alec Mason, as he goes on his quest to avenge his brother’s death and liberate Mars from the oppressive Earth Defense Force. The game features highly destructible environments and prides itself on its physics-based destruction.

The premise of the game is very simple. You assemble an arsenal of weapons ranging from both improvised mining tools and firearms taken from enemy soldiers. If it blows up, aim at the buildings. If it doesn’t blow up, you’d best aim that weapon at anyone and anything that’s shooting at you so that you can blow up said buildings. This isn’t a knock on the combat system. It’s surprisingly deep, and by design, not all missions will require you to destroy everything on sight. Crazy. I know. But here’s the thing, getting yourself killed and killing civilians will cost you morale. (more on that later) And morale affects several aspects of the game.

There are 3 main resources in the game: salvage, control, and morale.

You need salvage to upgrade guerrilla weapons. To obtain salvage, you must… you guessed it, cause widespread destruction. But before you flatten the surface of Mars, you must know that it would take several big bases in order to gather enough salvage for upgrades. Buying a new tool opens up its upgrade tree. For the most part, almost all upgrades are useful to some degree. Even the most underwhelming weapon holds great potential with enough upgrades.

The EDF control all six major regions of the map. The Red Faction’s job is to take each region one by one, no matter the cost. As a resource, control determines whether or not the EDF will remain in the region. The more EDF structures that go down and the more soldiers you kill, the more control the EDF loses for that region. Once you complete all critical missions for that region, and EDF control reaches 0, you are ready to push the EDF out for good.

Morale acts as a kind of multiplier for each mission you decide to take. Each region contains a number of side missions that range from raiding enemy strongholds, using walkers to keep the enemy busy, rescuing captured colonists, and riding shotgun on a demolitions spree around the map. The higher your morale, the more scrap you’ll get after each mission. Additional bonuses include more ammo in supply crates and nearby civilians picking up arms in your aid.

To round out the experience, the game also includes a local multiplayer mode in the form of Wrecking Crew. Online play is under the name of Multiplayer. Players can go against each other in a wide array of game types as they try to one-up each other in terms of their ability to destroy stuff quickly. Bonus Missions include the original’s first DLC pack, The Demons of the Badlands. There, you play as Samanya as a member of the Marauders, before the establishment of Red Faction. This game mode acts as an origin story for members of the Faction. It’s worth a play through once the main game is done. 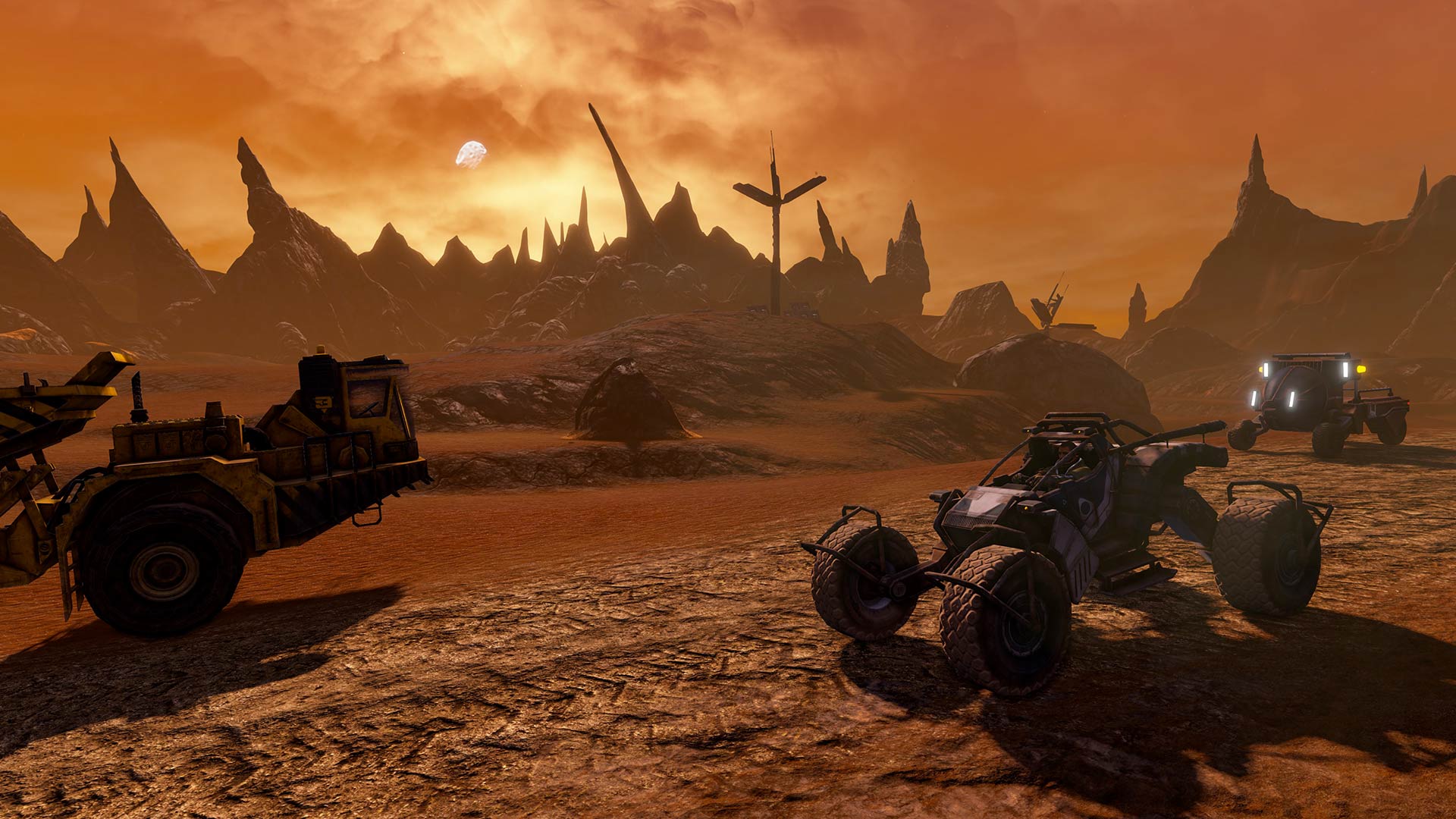 Red Faction, at its best, involves explosions and whole structures going down. In fact, the destruction aspect of the game is why most gamers hold the original in such high regards. Coming from a person who never played the original game, I can see why. This game wrote the book when it came to open world destructible environments. I’m surprised myself that a game that came out almost a decade ago can have so many awe-inspiring moments. I wonder why the idea never really caught on.

One of the things I noticed about the game, and for what I can tell no one gives enough praise for, is the fact that this game succeeds in making you feel like a guerrilla fighting a far superior foe. There are times when the enemy just spawns out of the nowhere and in endless waves. And that’s how it’s supposed to feel. I can’t recall the number of times when I felt the rush of escaping by the skin of my teeth, (by way of smashing walls, btw.) and making my way back to the safety of one of our bases. On a side note, the vehicles in this game are great. From the heavy utility vehicles of Parker to the slick and stylish luxury cars of Eos, every vehicle handles like you would expect.

Anything relating to the story seems to have a taken a backseat during the development of the game. I understand why Mason would be reluctant to join the resistance even after what the EDF did. But after that brief introduction, the story just flat lines. We get a few cutscenes involving the EDF and some with the resistance, and that’s it. Business as usual. Apparently, liberating an entire planet takes a lot out of you. So much so that you don’t really feel the need to let anyone know how it affects you.

And speaking of the fine people of Mars, there seems to be something weird going on with friendly AI. On more than one occasion, they feel the need to just jump out of the transport and engage the very enemies we are running away from. It happens at random. Much like how the game randomly crashes, resulting in me saving after every mission out of paranoia. It doesn’t happen often. But it happened enough times to get me manually saving as often as I can. 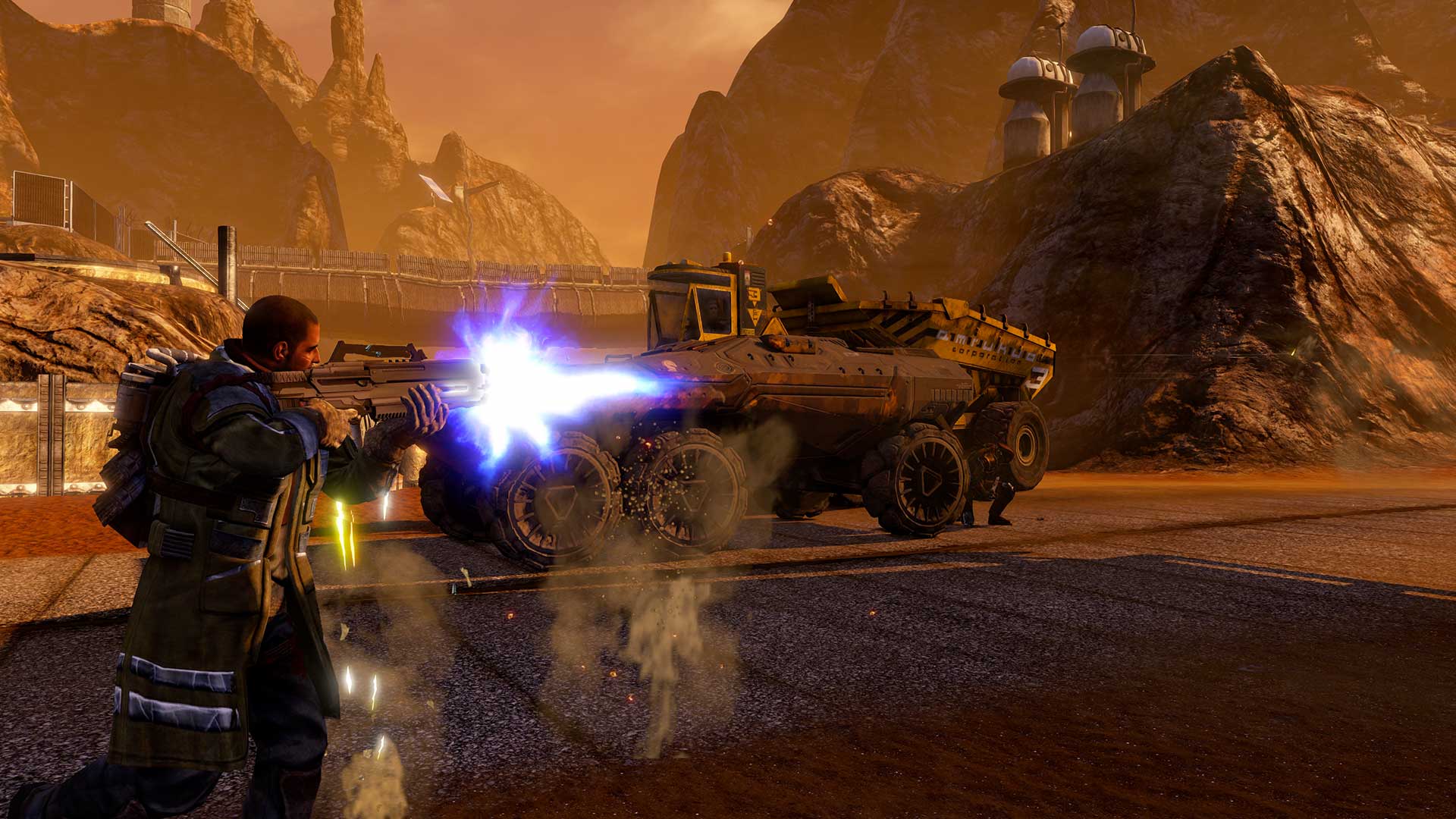 I am of the opinion that someone greenlit this remaster solely on the title itself. No amount of face palms can express how much I dislike the title of Re-Mars-tered, but here we are. Terrible puns asides, the game is every bit as fun as advertised. Unfortunately, some textures may look bland by modern standards and some gameplay elements did not age well. However, the focus point is and always will be about the destructible environment. After mastering a few tricks, you can actually take pride in the fact that you know where to hit to make any structure go down fast. And let me tell you, there is nothing more satisfying than watching a tower topple over, as all the pieces fall apart on the ground.

If you are the kind of gamer who appreciates destruction – beautifully done destruction, this game will satisfy. Hands down. If you are expecting to have an epic storyline involving a superior military force going up against a ragtag group of rebels, I’m sorry. You are better off searching somewhere else. Other than that. it’s a very fun game that is accessible to plenty of gamers.

Red Faction: Guerrilla Re-Mars-tered (PS4)
Score Definition
We tell you, it’s a good game! It’s not average! It might have some problems here and there, but you have to admit it is a “Good” game.
Pros
Destructible environments
A wide variety of weapons and vehicles
Satisfying gameplay
Impressive visuals
Cons
Occassional crashes
No character development
Unremarkable story
Odd AI behaviors
7.6
Good