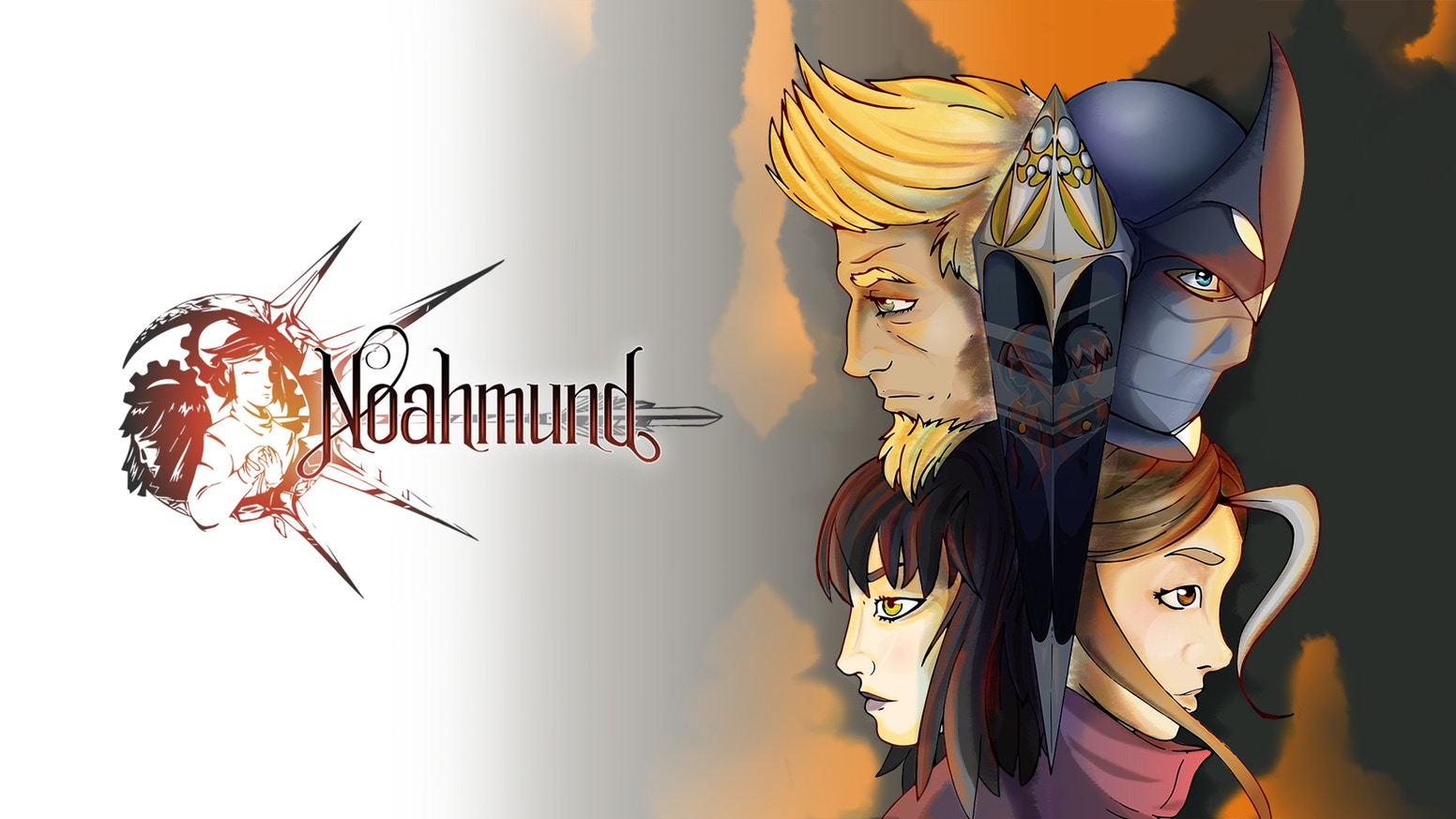 Life does not always give us the opportunity to return the favor of the good things that has happened to us. Instead, we pay it forward. Estudio Ábrego has aspired to do this, to give back to the current generation and help people understand emotions, courage and character. 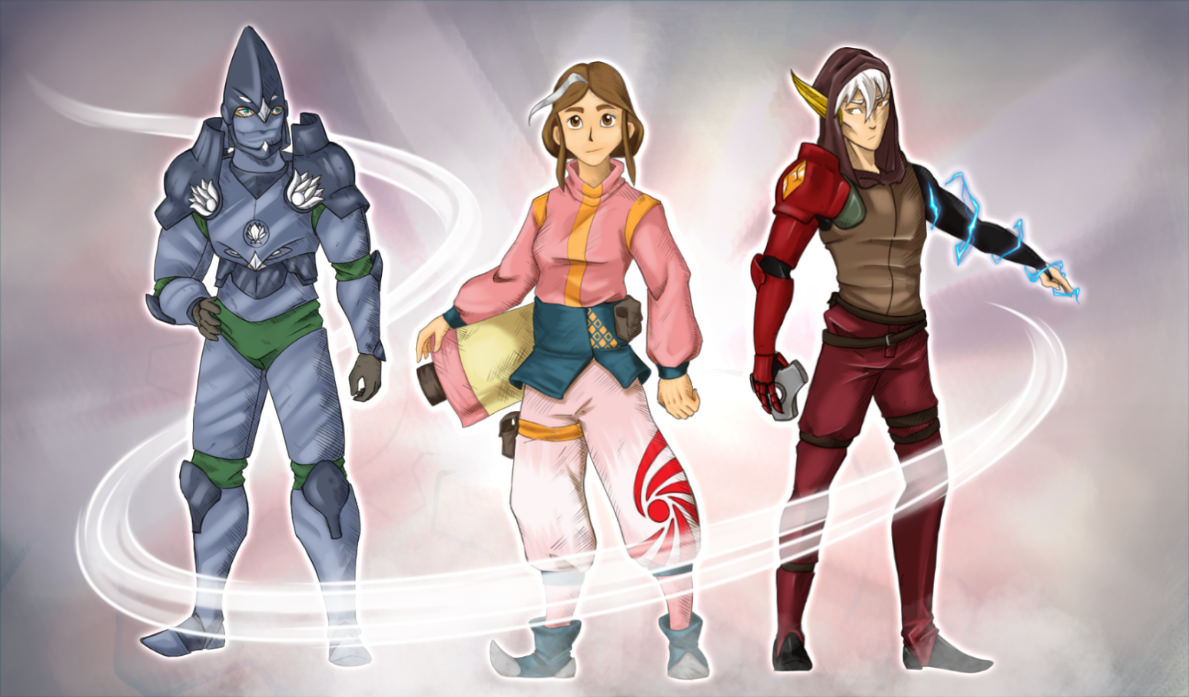 I feel like Noahmund’s storyline is its best feature, just like in any JRPG. There are many intrigues and their lore is pretty great. It’s nice to see that flavor text is everywhere and their world building is just right.

The story begins in the continent of Feros and a war is waging. The enemy, under the banner of Salaber, used a weapon of great power that rained fire causing the deaths of many. There are now rumors that the weapon has resurfaced. Galina and Berani who are agents of Shinn, are sent to investigate if these rumors are true. Divider, who is a general of Salaber is also looking for the weapon. Their investigation lead them to a ruin and they cross paths with Stalos, who has the ability to conjure lightning. He seemed to be the enemy of Salaber, but he didn’t provide them any information either. They reluctantly join forces, to find the weapon and avert disaster.

Noahmund’s environment looks beautiful. After all, it’s hand drawn. However, the characters still look pixelated and rotate in a clunky way. I personally don’t mind that but I’m sure there are some people who need to know it. 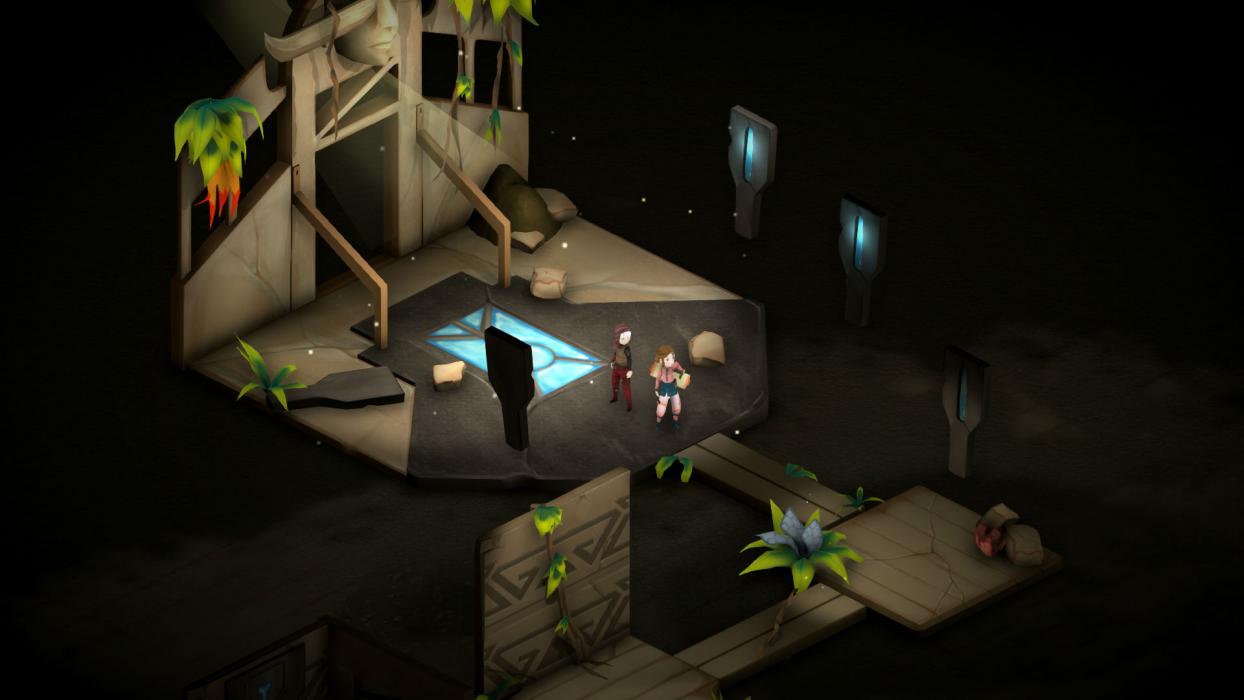 The game has won awards for its wonderful music, which you can also get through the Blue Wind Edition on Steam. A bit of it is featured on their launch trailer found here.

The game boasts of its original system called Motion Battle Chess. Basically, the whole game is on a grid, think Fire Emblem or Final Fantasy Tactics. However, the player and the enemies move together in real time! This introduces a time element on where to go and what skills to use. Prepare to get your butt whooped especially when facing enemies for the first time. Not to worry, you can replay the battle until you are familiar with the enemy’s abilities.

What happens when you have multiple characters? The AI controls the other one. You can switch with different characters in real time as well. The AI was pretty good at healing. It was amusing how I died while using Stalos and the AI Galina carried me throughout one battle. 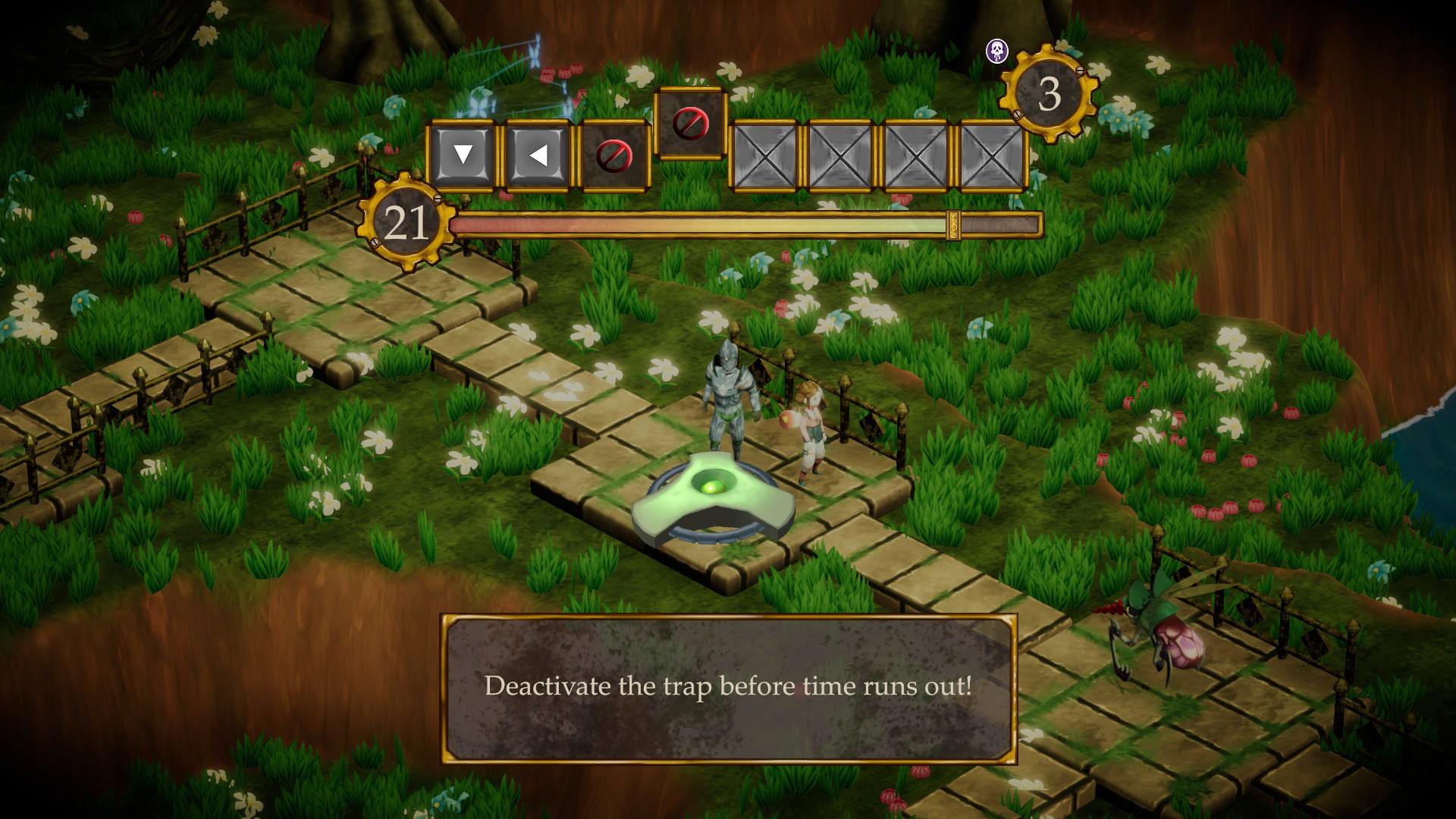 There are many puzzles in the game. One of them is a draecho or a trap. The trap is timed. In order to disarm the trap, you are required to follow the combination or suffer the consequence of getting a debuff. Word of advice, when there is a red cancel sign, don’t input anything during that part.

Since it is similar to a JRPG, it saves the game only when you reach a save point. Unfortunately, there are bugs and crashes that happen which deletes your progress. Now, I understand that they are only a team of 9 people. I am hopeful that in the future, they are able to patch the game and get rid of these bugs.

About patches, I hope they also introduce quality of life patches. I have made a list! Going into Noahmund’s forums page takes you to a Spanish forum, so I haven’t posted it on their website. I would really like the game to keep getting better in the future. 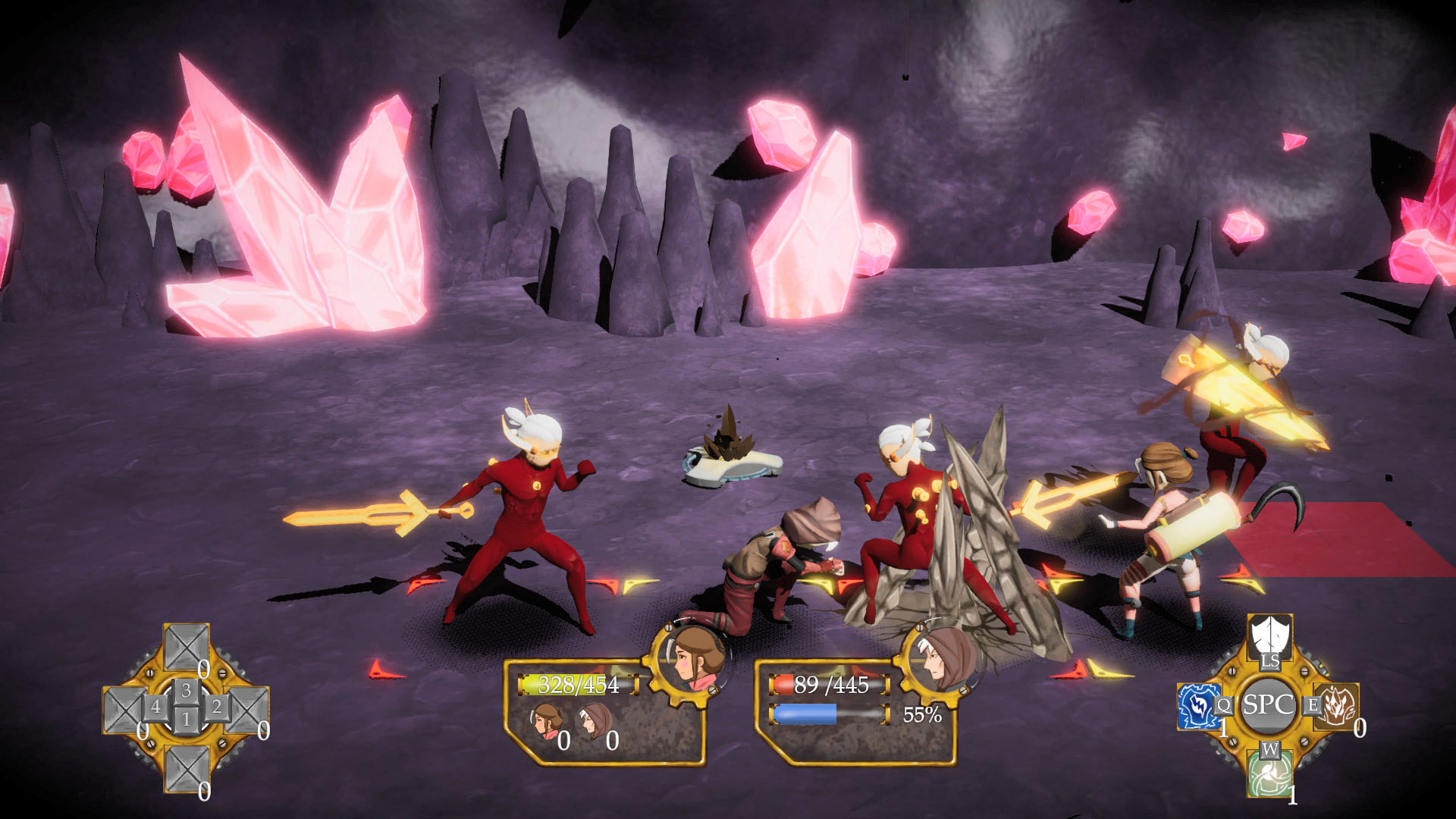 What I would like to have is that for the map to be cleaner and easier on the eyes. Things like: where the last save point is, or that this dungeon door requires a key. This information could be placed on the map once it is discovered. Another would be that the markers for attacks like lasers be clear on the action board during battle. Due to the point of view, I hope they make the warning lines on the floor a bit larger.

I believe the game was initially made with the Spanish gamer in mind, having Japanese and English as the secondary language. I do appreciate playing games in a different language and would rather have that audio for the game.

However, there was a cutscene in the beginning that explained the lore for the game and I couldn’t seem to figure out how to turn on subtitles for that cutscene. Being a classic JRPG style, I felt that it was important to be immersive and wished that I could have understood what was in the scene. It would be great if the option to select the language is on the beginning of the game, before the cutscene. 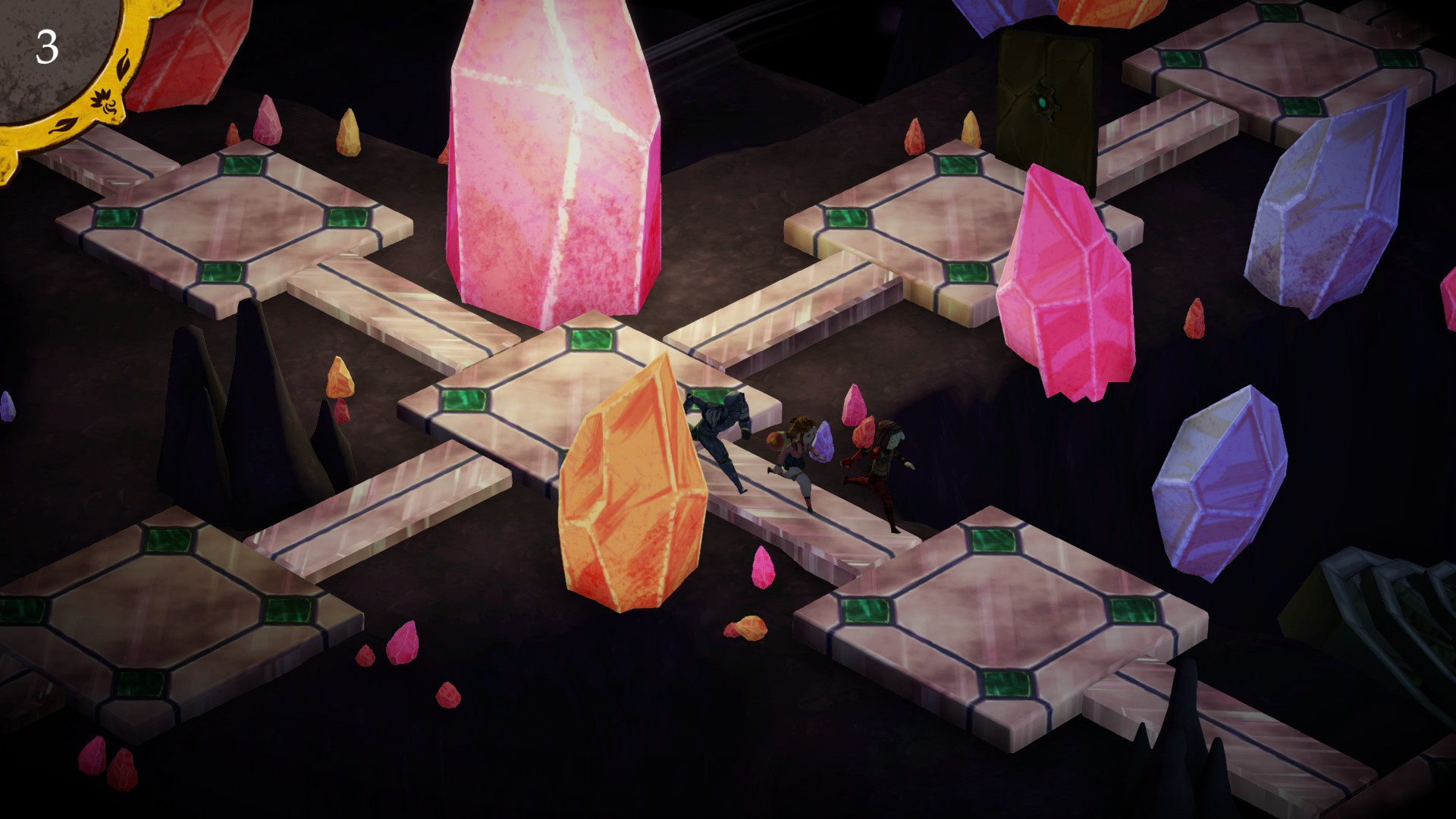 Noahmund is best played with a controller. When using the keyboard, there is no mouse feature and it can get disorienting at the beginning. If there could be a reminder for PC players on steam regarding this, it would be great.

When purchasing items through the merchant in the beginning, there was a bit of bartering going on. I loved that you could haggle with the merchant! However, it took a bit of experimenting. The buttons also have the text “Add Object” or “Remove Object”, which didn’t make sense. Maybe, there could be a mini tutorial regarding purchasing or trading, or at least change the text that was used.

With that said, this game has still a long way to go so that it can be awesome. What we already have right now is pretty good, it just needs polishing and updates. I am positive that Estudio Ábrego will be able to pull it off eventually.

Noahmund Review – Labor of Love in Progress
Score Definition
It’s playable, but the game does have a lot of setbacks. The dialogue and sound are just horrible, or it might be plagued with bad mechanics.
Pros
Motion battle chess
Beautiful environment
Superb music
Cons
Takes a while to fix bugs
Bugs and crashes
Needs updates and quality of life changes
3.5
Bad