Immortal Redneck Review – Buddy, We Ain’t in Kansas No More!

Of all the people in the world to mummify, the gods of Egypt choose a Redneck tourist to bring back from the dead. Why? No one knows. And that’s reason enough to storm their pyramids and beat the ever-loving life out of every monster that gets in the way. Armed with a pistol, a shotgun, and enough dynamite to open up his own mine, the Lord of Mayhem will have his answers one way or another. 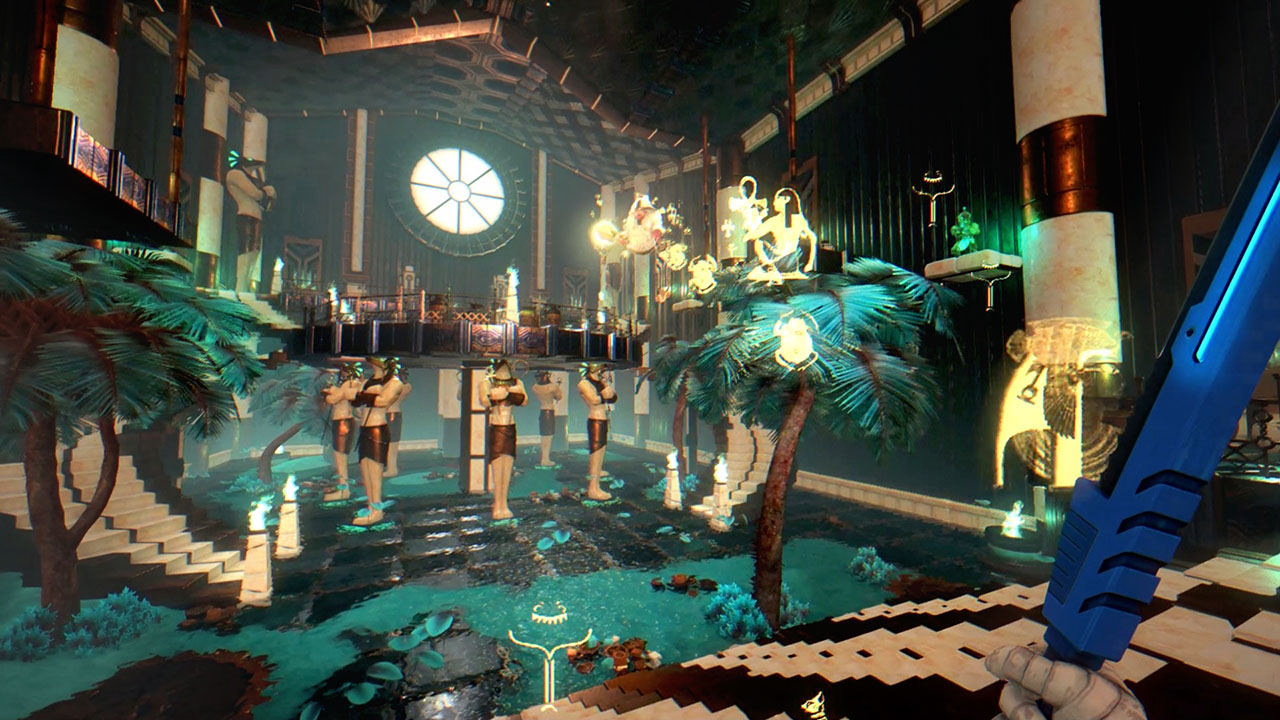 Immortal Redneck is a First Person Shooter with rogue-lite elements. Set in the deserts of Egypt, players take on the role of the titular Immortal Redneck. Through a series of unfortunate events, he seems hellbent on getting back at the jerks that turned him to what he is now, even if it means dying over and over again.

After a brief tutorial on how the controls work, the player starts off in an open field with only the sarcophagus and skill tree nearby. These locations will be very important later on once the player completes a run in the pyramids. Torches light the path to one of 3 pyramids. The other 2 will be unlocked once the first pyramid falls. Before entering a pyramid, the guards will ask for all your gold. That is the price one must pay to enter the pyramid. Make sure all gold is spent before attempting a run in the pyramids.

Once inside, a green light will indicate which rooms the player can enter. The door opens ever so slightly as if to give a preview of what’s to come once the player crosses the threshold. Some rooms task the player to defeat all enemies before being allowed to proceed. Others hold challenges like not getting hit or avoid shooting enemies with the promise of treasure on the far side. The chest disappears if the player fails the challenge. Once in a while, there will be empty rooms that do nothing. The floor ends once the player finds the staircase to ascend to the next floor. Being true to the pyramid motif, the floors get smaller with every floor. But, enemies become a lot stronger – gaining larger health pools and an attack increase. 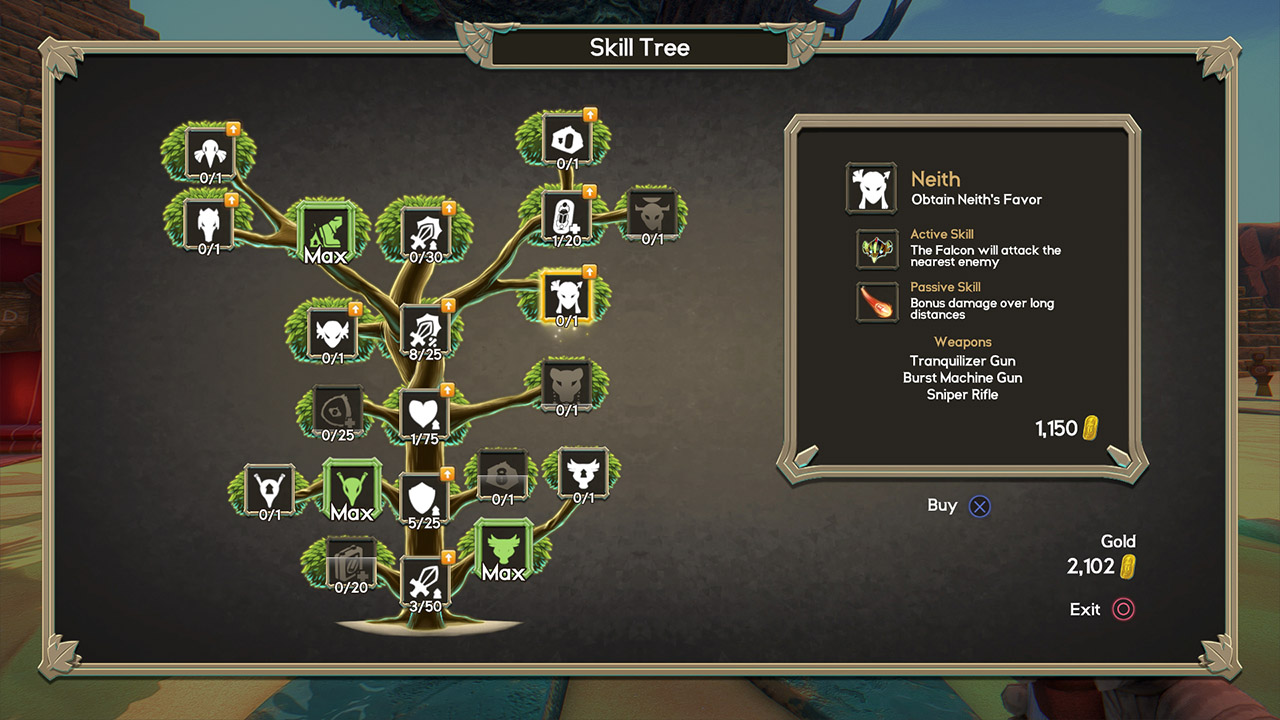 To aid the player on their quest to higher floors, there are scrolls that give unique quirks. Most scrolls are good with the exception of some that will definitely ruin your day. Scrolls can be found in chests and by defeating enemies. Monsters may also drop gold, meat, and ammo depending on what the player needs most at the time.

The goal is to reach the top of the pyramid, and beat the boss that resides there. Players will encounter at least one sub-boss on the way there. Though not a completely a tough fight, the sub-bosses do a great job of draining the players’ resources. Prepare to do some god-level dodging and hold tightly to those scrolls if you want to reach the top with enough left in the tank.

Should the player die at any point during the run, they lose everything and respawn at their sarcophagus. From there, they get to choose 1 build that they want to play as on their next run. All the gold the player collects can be spent on either the skill tree or the merchant. The merchant provides some goodies for the next run. The skill tree upgrades everything from every possible stat to unlocking 8 other builds(Favors) that the player can mess around with. The most useful of skills are expensive, of course. From there, it is a matter of going back to the pyramid and repeating the process until the boss falls. 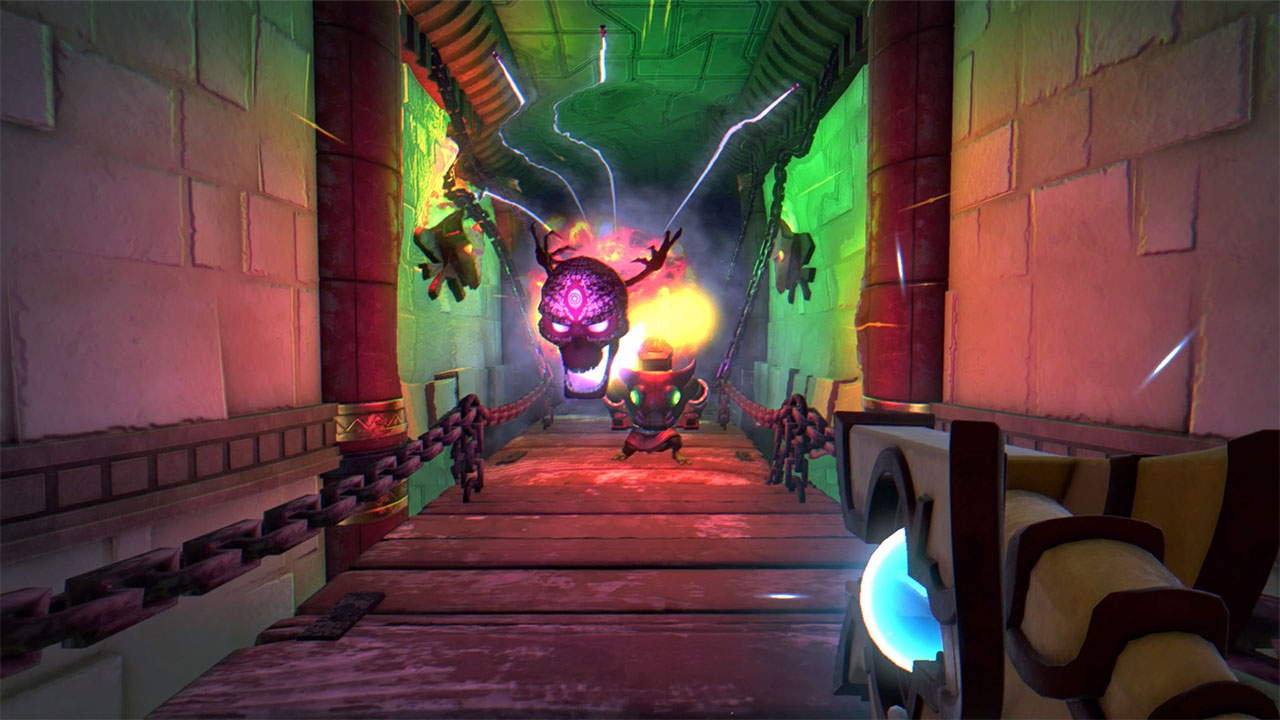 I’m just going to get this out of the way and say that the controls and the feel of each movement remind me of old school shooters. The twitch controls are the best example of this as every moment is light and lightning fast. There are moments when I feel “Old Doom” in each of my movements – meaning I actively dodge projectiles and try to get as close as possible to the enemy while aiming the crosshairs for that sweet shotgun blast.

And speaking of the crosshairs. The game makes it easy to look in the general direction of an enemy and landing a shot. It’s not exactly aim-assist but more like there’s a slight cone of effectiveness around the crosshairs and shots just hit. It’s all in good fun. And no, mummies do not have head critical hit areas. The criticals occur randomly – no matter where you hit the enemy.

From a distance, the skill tree may look simple and lackluster. But a closer look reveals the depths in which we can invest in just ONE particular aspect of the Redneck. Many of the skills can be upgraded more than 20 times. Making it seem real easy to just choose base attack damage and max it out. (You can do that, btw) Another way of leveling up is by purchasing the favor of 8 other gods. Each god has both an active skill and a passive one. Along with their sets of weaponry. Collecting gold and dying over and over again has never been so rewarding. 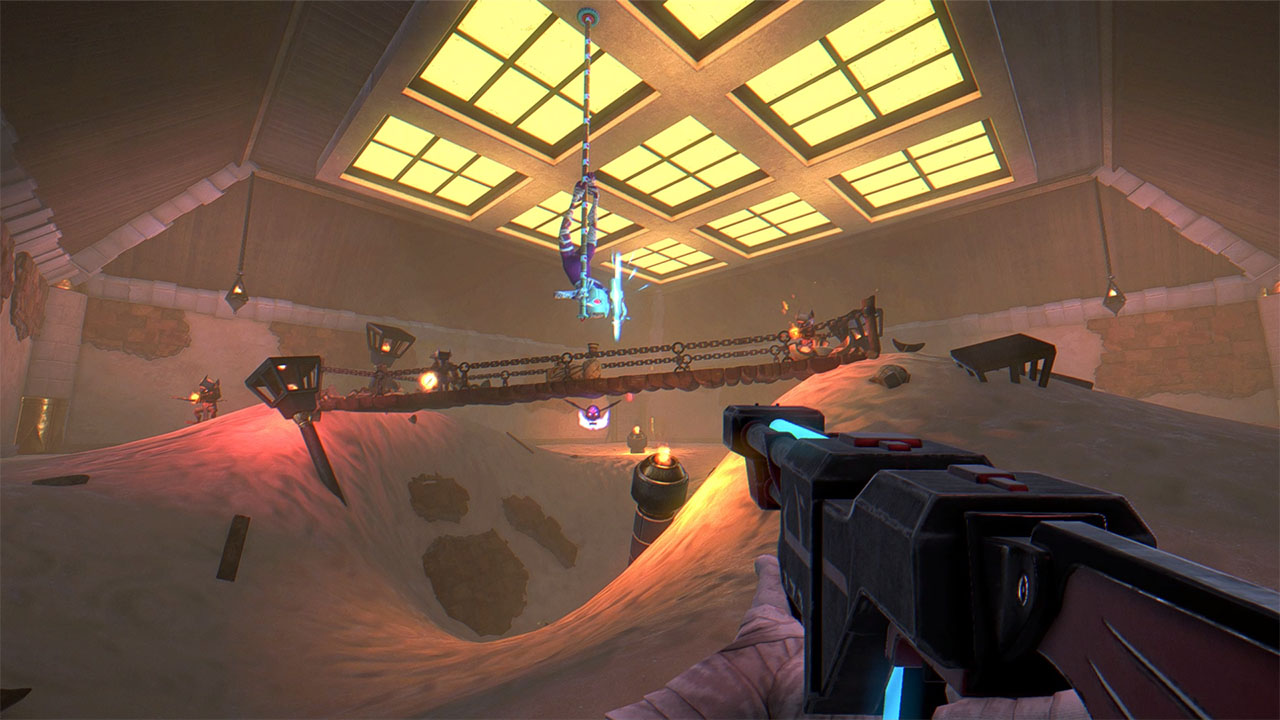 Once you pick up a scroll, you can’t unequip it. It’s always active for as long as you are alive. I’ve been in situations where I had to change up my playstyle because the scrolls I got favored high powered single shot weapons over automatic ones. This little complication in the gameplay loop makes for some exciting moments of intrigue and dread. In truth, I don’t think I’ve seen all of the scrolls’ effects. Very seldom do I ever get one that I’ve seen in previous runs. And of course, it wouldn’t be complete without the added chance of getting a bad scroll every once in a while.

Bad scrolls really ruin your day. There are scrolls out there that can easily mess up your run. It doesn’t matter if you’ve been on a run for 5 minutes or an hour, a random bad scroll like the ones that take away 75% of your life will make things very difficult. The movement debuffs are fine for the most part, it just takes away some of the fun of dodging. I’m pretty sure there are worse scrolls out there, but I’d rather not know. Sometimes, it’s just objectively better to die early with a bad scroll in hand rather than playing it out. There are few things more nerve wracking than going to new rooms with only a sliver of health remaining.

The first time I heard about this game, I sort of expected something completely over the top. Then when I found out that it was set in Egypt, I was thinking of Serious Sam and the like. Little did I know that it was actually just a set up for something much, much more. The skill tree caught me by surprise. What started out as paying for whatever until the gold’s gone turned into its own minigame of optimization vs. trying out new powers. No matter how you decide to play the game, it’s almost a guarantee that you’ll have a good time while playing. If you’re a fan of arcade style shooters or just looking to have a fun time shooting a bunch of monsters, look no further than Immortal Redneck.

Immortal Redneck Review
Score Definition
When the issues of a game are rolled and stomped by its greatness, then it’s something to invest on if you have some spare.
Pros
Good old fashioned shooter fun
Very deep skill tree
Rewards good play
Cons
Recycled rooms easily noticeable
It takes one bad scroll to ruin a good run
Unlucky runs
8.5
Great