A ragtag group of space explorers enter an unknown system looking for adventure. They are ambushed by a cult leader and their Captain gets kidnapped. Said crew are left for dead as their ships crash land on a nearby planet. With some luck and a little bit of elbow grease, they finally get their act together. And thus begins the search for answers. Sound familiar? Good. That’s the beginning of Starlink in a nutshell. I may have failed to mention that the Captain has knowledge of advanced alien technology and that one of the crew is a mysterious alien with amnesia. But hey, at least there are toys. Everyone loves toys… 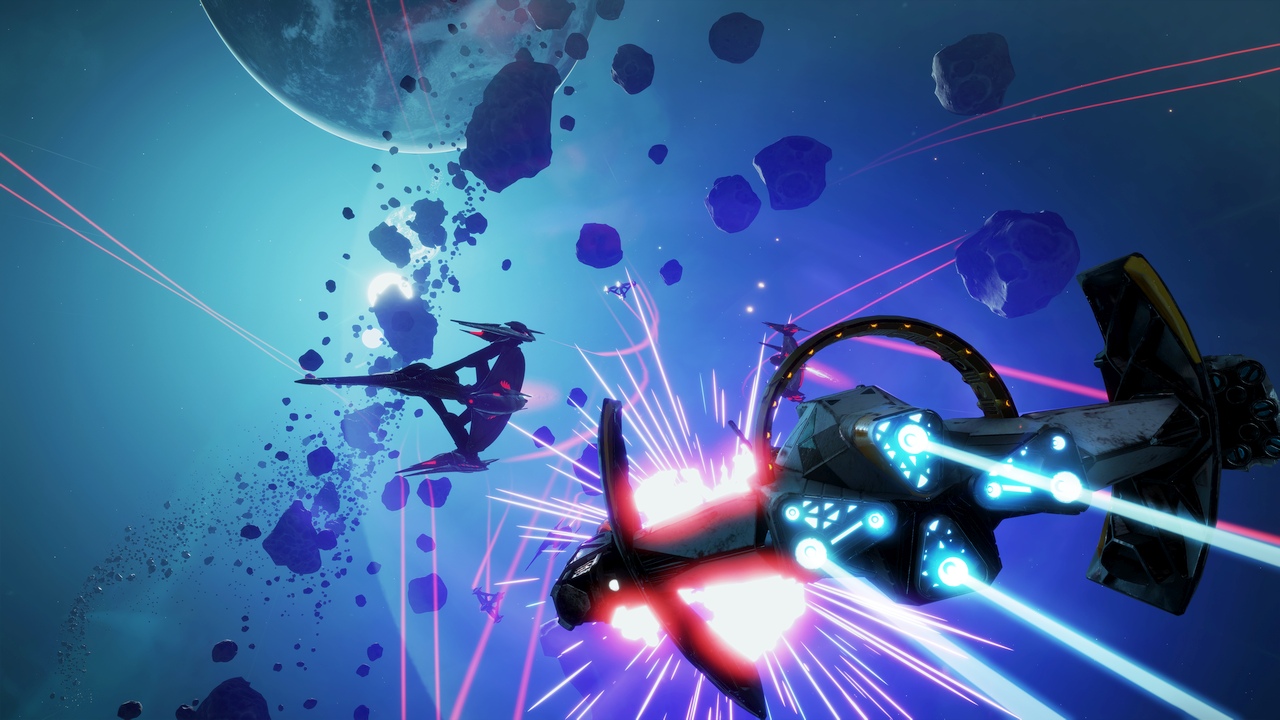 Starlink: Battle for Atlas is an action-adventure game that takes place in the Atlas star system. After an attack by Grax and his Legion followers, the crew of the Equinox must explore the system and build alliances in order to defeat the Legion and hopefully rescue their Captain in the process.

What sets this game apart from similar games in the same vein is the fact that it features an optional toys-to-life aspect that involves attaching a peripheral on the controller and building a ship with actual toy parts. Players also have the option to buy everything online should they decide to do so.

The vast majority of the game sees the player taking control of their chosen pilot and building a functional fighter with a core and additional wing parts. Fighters may only carry 2 wing-tip weapons at a time and a pilot skill that is great for getting out of jams. While in toy form, the parts can be swapped out at any time. Players with digital-only content will have to pause the game and swap out parts from the menu. Dying involves swapping out the core for an instant respawn. Or going back to a previous save point at the cost of some Electrum.

The main enemies consist mostly of the Legion and their giant walkers called Cyclops. They come in some varieties depending on their element and level. Wherever a Cyclops is, a group of Imps are usually around as well. Imps are annoying little things that try to jump onto ships with the aim of limiting ship movement. Not usually a threat, but an entire horde of them might cause some trouble. Bands of raiders also roam the planets, messing up progress for both factions. 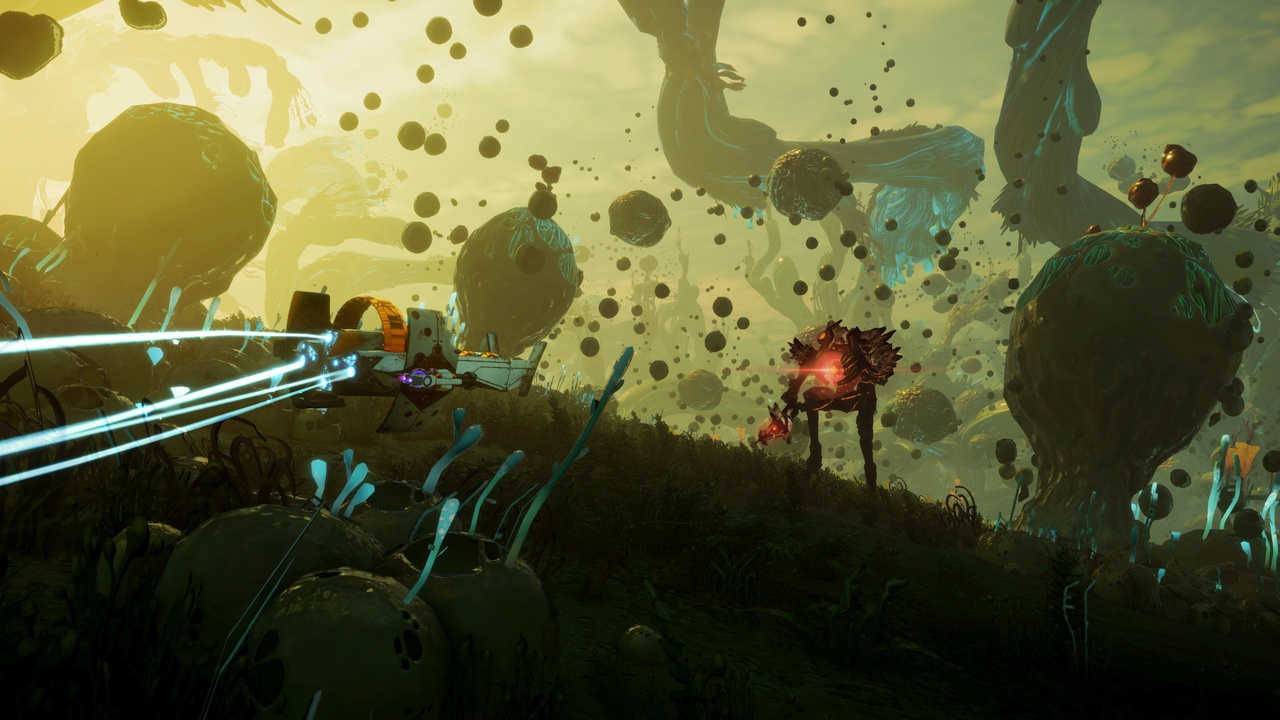 Exploration plays a huge role in the game as half of the battle for Atlus involves finding settlements and claiming them for the Alliance. Outposts play a vital role in this as each facility is equip to give the Alliance a slight advantage. There are Observatories to extend allied vision. Refineries mine and process Electrum, the system’s main resource and its currency. Workshops provide a constant stream of mods for the cause. Armories provide a means of defending allied settlements while the Equinox crew is away on other planets.

After a bit of investigating, the Equinox crew find out that the Legion’s goal is to siphon Electrum directly from the planets using ancient machines called Extractors. The Alliance needs to destroy them because, for one, they are slowly killing planets. And two, Extractors are one of the few sources of Nova in the system. Nova cores are important to the building of outposts and certain mods.

There is a certain hierarchy within the Legion that is present during the Battle for Atlus. At the very top sits the Dreadnoughts – battle cruisers that produce and deploy Primes onto planets. Primes are walking death machines that roam planets and destroy any settlement they come across. They plant Extractors in areas rich in electrum. The power of a Prime depends on the number of Extractors present. Destroying Extractors will greatly weaken a Prime. The same goes for Dreadnoughts as Primes transmit their power to the Dreadnoughts. Victory in the battle involves completely shutting down all Legion operations. 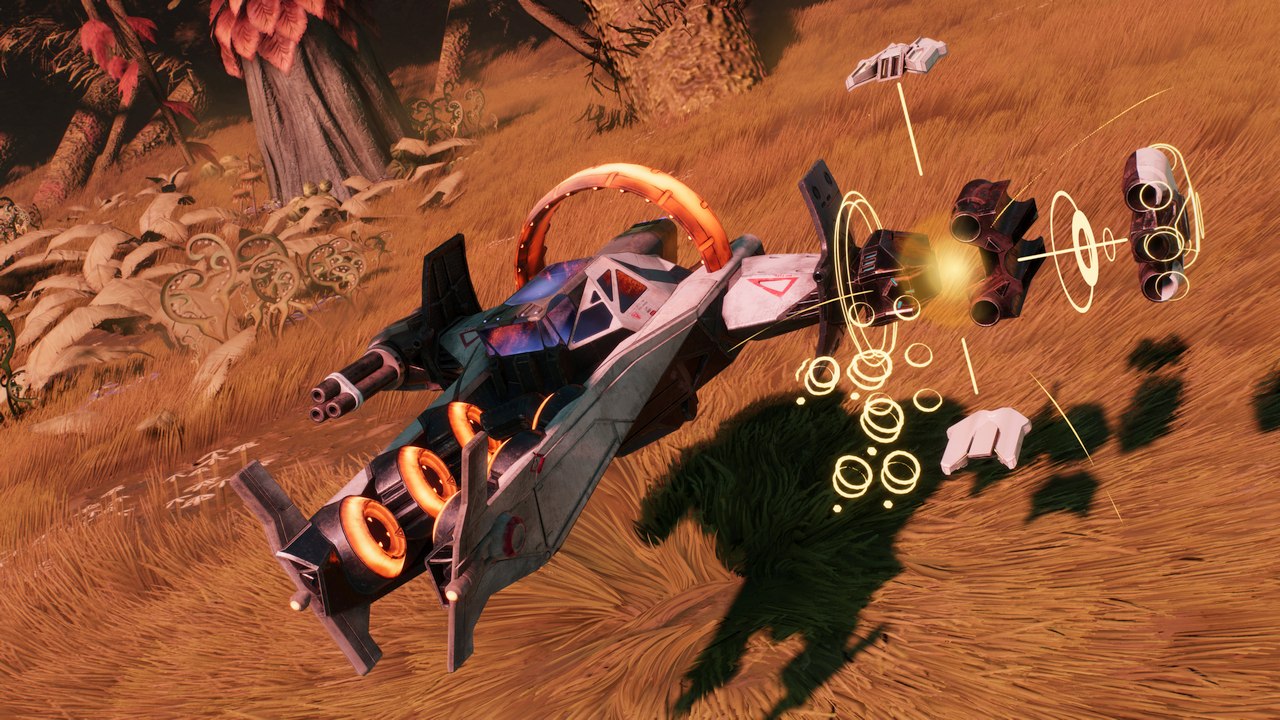 The game does a good job at keeping the player engaged. It’s not enough that Dreadnoughts pose a constant threat by deploying Primes on unsuspecting planets. The Primes themselves plant Extractors that pollute the air, limiting movement. They also spawn the raiding parties that will eventually attack allied settlements. The balance of power is constantly shifting. And the only way to stabilize and allow yourself some breathing room is with the construction of Armories. But armories are not available until 25% of the planet is in Alliance hands. That rush to 25% is where most of your focus goes to.

There are plenty of side activities in the game apart from killing Legion. There are planets to explore where one can scan the local lifeforms or take part in the trading of resources and samples. The maps are littered with the remains of derelict mining facilities spanning all the way back from a time before the Legion attacked. Spires have puzzles that contain Nova and mods. And let’s not forget the space between planets. It possesses a fair amount of treasure but are usually protected by bandit bases.

There is not much to say about the characters and story. Oddly enough for a game this big, it’s certainly lacking in the story department. There are essentially only 2 quest lines in the entire game, the Battle for Atlus and a small quest that involves Judge and St. Grand. I can’t fault the developers for not wanting to build more of a connection between the pilots and the player. It’s still a missed opportunity, regardless. And though the characters are well defined and may seem to be full of personality, they can swap out at practically any point of the game and it’s not going to change anything. In this case, that would be appropriate since the whole idea of the game is swapping out everything on the fly. 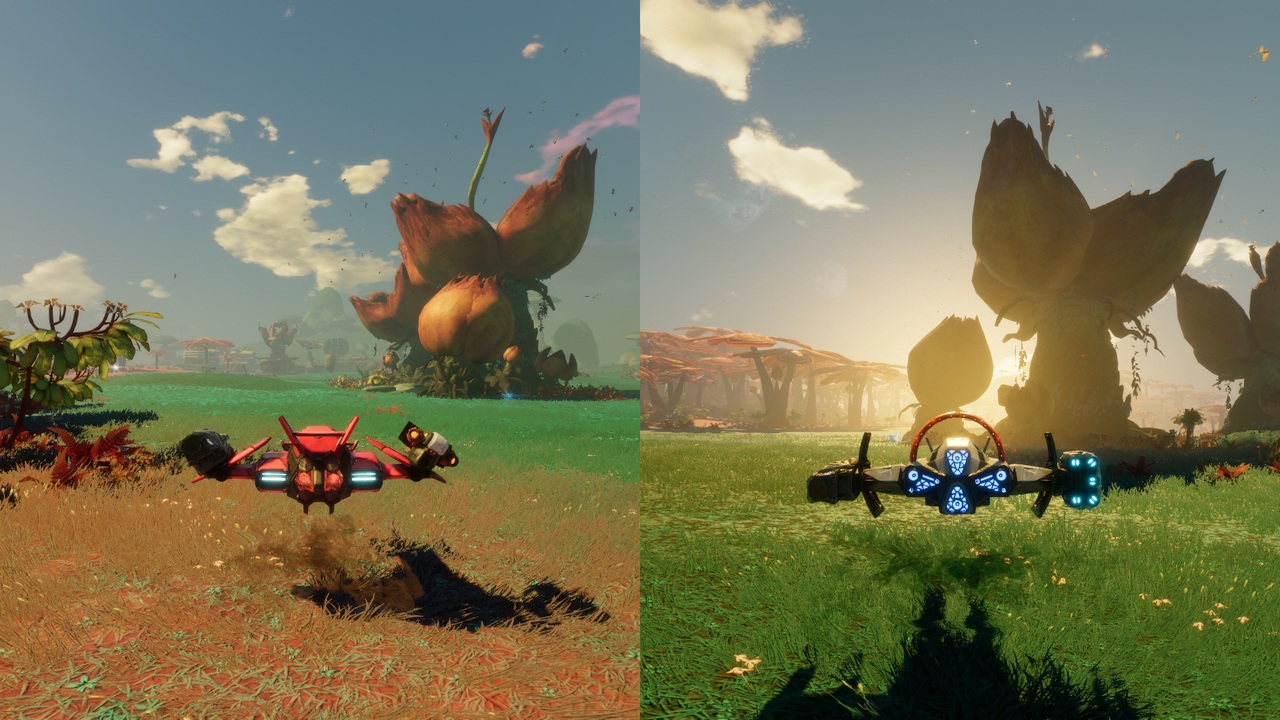 I can’t get over how underwhelming the cutscenes are to me. These are supposed to be the visual spectacles that tie up the experience but it comes off as something added on at the last minute. There is little to no background music, and even the sound effects feel off. The Judge story line is just a mash up of comic book strips, slightly animated for dramatic effect. Also, I hate the platforming segments in that quest. It doesn’t make sense for land speeders to be performing precision jumps and it just annoys me that it’s even in the game in the first place.

I would also like to point out that the repetitive nature of the game is what limits it from getting a higher score. I can appreciate solid gameplay where it is applied, but this game takes rinse and repeat to another level. Almost all the battles in the game play out the same way, with only the final battle with Grax as the only exception. Once the game explains how to take down the Extractors, the Primes, and the Dreadnoughts – prepare to do the same thing over and over and over again. 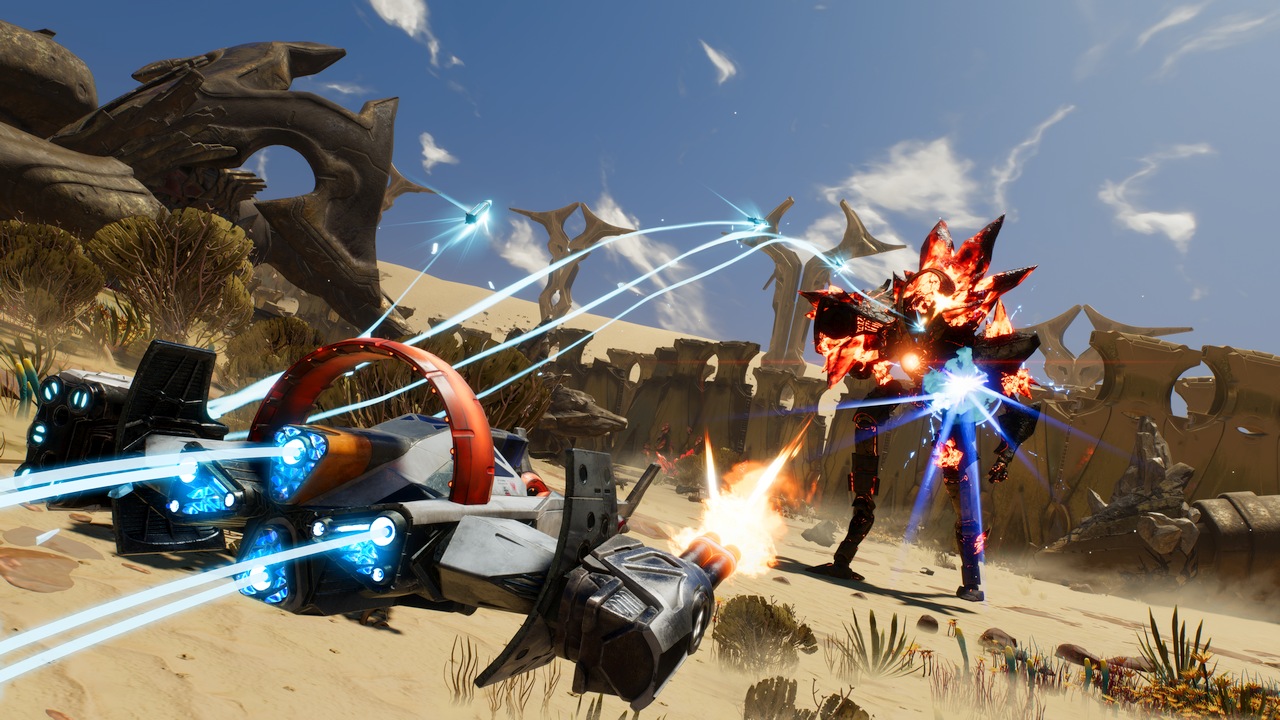 Personally, I think Starlink does at least 2 things incredibly well: the active combat system and general game performance. At its best, the combat is really fun with all the swapping out and the unexpected things that happen from time to time. For all my time playing, I have not encountered a single moment where the game’s performance is in question. It’s as smooth as butter. For a game that’s this visually vibrant, color me impressed.

However, I can’t overlook at how generic the story and the characters are and the repetitive nature of the game. Maybe for all these reasons, I could bump the game up to something close to 7.5, but the one thing this game does that deserves its score is the fact that almost all of the content is tied to additional purchases. I’ve played the game with no internet connection on, and it’s only 1 pilot, 1 ship build, and 3 weapon types. It is borderline playable.

With all the additional purchases, this game is highly enjoyable. Without them, it is playable. I recommend this game to anyone that likes to keep busy with collecting and exploration. The combat is fun too, if only to see the results of all your hard work. Other than that, it’s an OK game. It tries to do something with toys and multiplayer but it just falls short. Take it for what it is and enjoy your weekend with it. 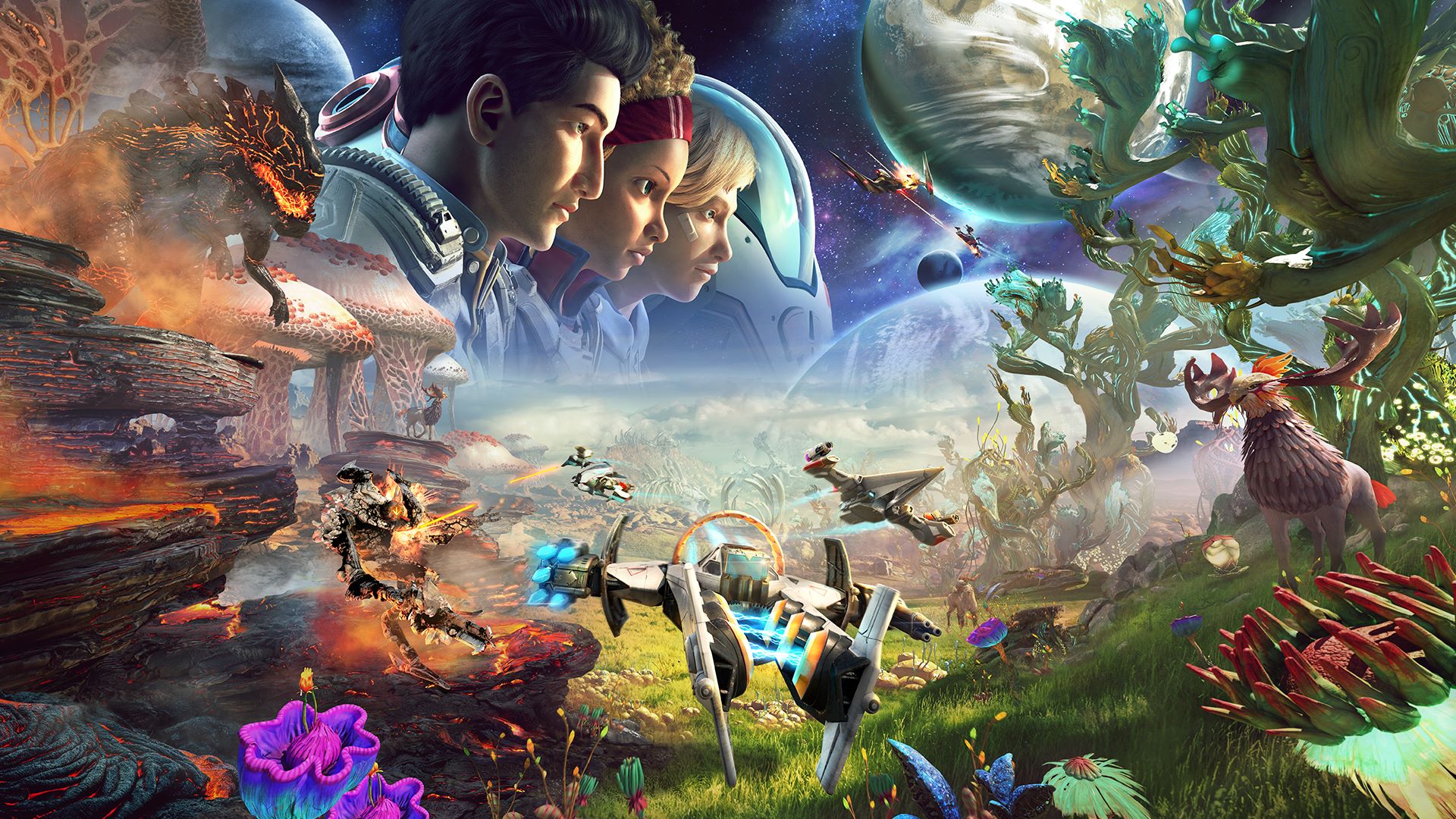 Starlink: Battle for Atlas Review
Score Definition
We tell you, it’s a good game! It’s not average! It might have some problems here and there, but you have to admit it is a “Good” game.
Pros
Visually looks good
Seamless transition between space and planetside
Rewarding active combat system
A lot of collectibles and side tasks
Cons
Repetitive
Cutscenes seem to be lacking impact
Awkward space combat
An arsenal that relies on additional spending to fill up
Tries to tell a story, but falls short on delivery
7
Good