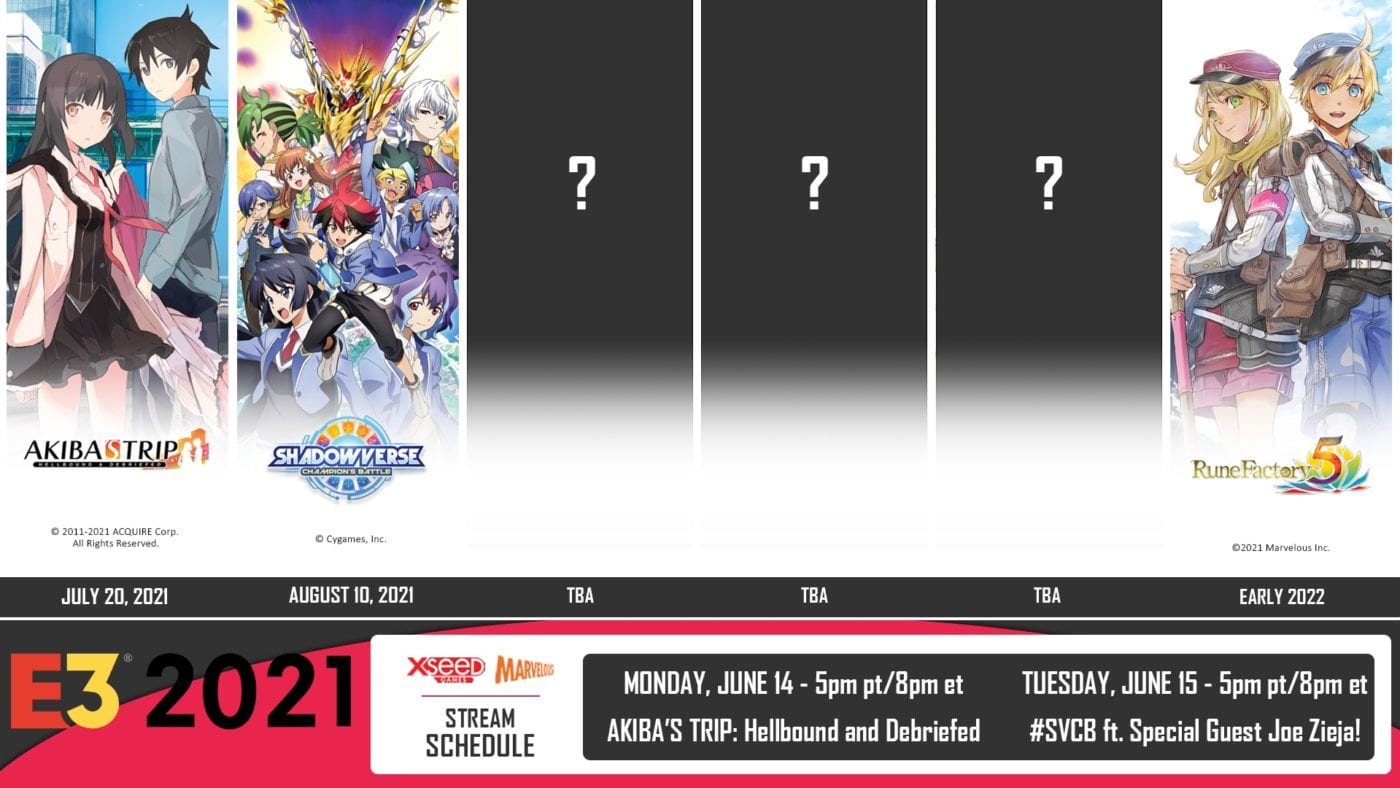 Game publisher XSEED Games has recently revealed its big plans for its E3 2021 presentation ahead of it.

The game publisher revealed that they are planning to show the fans livestreams, announcements, and community events through the official app or at the virtual XSEED Games E3 booth. It will also participate in the Future Games Show, which will start on Sunday, June 13 at 4 PM PT/7 PM ET with news of upcoming titles like Rune Factory 5 and more.

The XSEED Games virtual booth will host information about their upcoming releases including AKIBA’S TRIP: Hellbound & Debriefed and Shadowverse: Champion’s Battle, as well as additional titles as they are revealed. The schedule for their special livestreams, which will be hosted on Twitch and viewable in their virtual booth, was also announced today:

About AKIBA’S TRIP: Hellbound & Debriefed – PS4™ System, Nintendo Switch™, PC
Return to a lovingly recreated Akihabara circa 2011 to explore the bustling streets and back alleys of this otaku paradise. But beware—a seedy underworld lurks in the shadows of Japan’s famous electric town! After finding his missing friend unconscious and bleeding in an alley, young otaku Nanashi is attacked by a sinister figure straight out of a horror manga. As he lays dying, a mysterious young lady offers him some of her blood, both saving his life and changing it forever. Expose your opponents to sunlight in the first entry in the AKIBA’S TRIP series, arriving in the West for the very first time!

About Shadowverse: Champion’s Battle – Nintendo Switch™
In Shadowverse: Champion’s Battle, players take the role of a transfer student to Tensei Academy, where they are quickly introduced to the Shadowverse card game by their classmate, Hiro Ryugasaki. The new friends team up with Shadowverse club president (and only member) Rei on a quest to master the popular card battle game and restore the club to its former glory by winning the national championship. Throughout their adventures, players will be able to explore unique locations around the school and surrounding town, where events and encounters await in the least expected places. Team up with new friends, battle to become the national champions, and save the Shadowverse Club for future generations!

About Rune Factory 5 – Nintendo Switch™
Set off on a grand adventure in a fantasy world with the latest entry in the Rune Factory simulation RPG series. After losing their memory, the hero lands in a small town blessed by nature. There, they are recruited into a band of peacekeeping rangers, and their new life begins. In addition to their normal duties, the hero can farm the land, cast a line into the nearby river, and so much more! Team up with townsfolk to battle monsters and unleash powerful combination attacks—just one of the features new to the series. The stage is set, and the curtain rises on an exciting new adventure in Rune Factory 5!