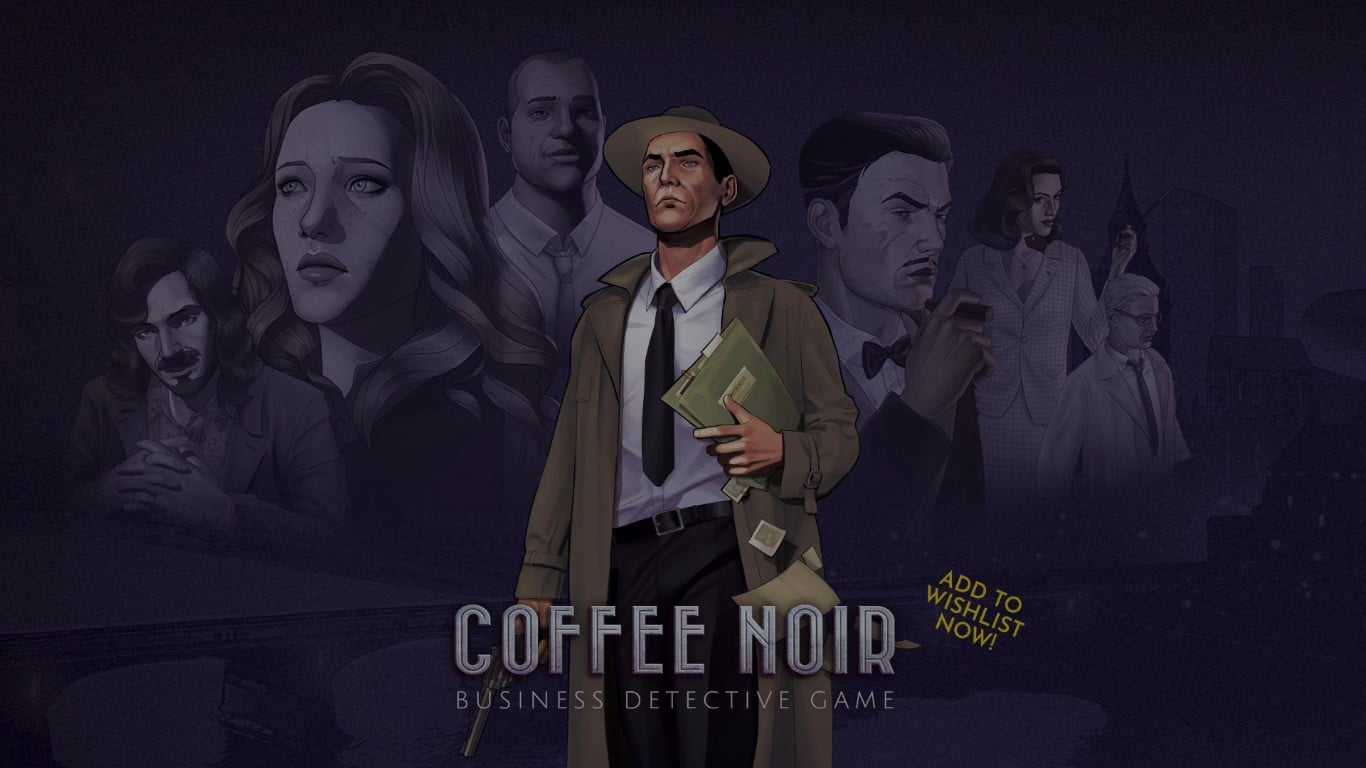 Coffee Noir is a cross between business management sim and narrative deduction game. Players take on the role of an undercover investigator named Arthur Oliver. The game is set alternate Earth where coffee phenomenon in the 1940’s caused the world to take drastically shift from what we know. And in the 2021, Neo-London looks like something from a sci-fi novel, but with a coffee shop around every corner.

The main goal of the game is to investigate the mysterious disappearance of a Neo-London coffee magnate. To do this, they must maintain the cover of a coffee businessman. Approaching persons of interest with business offers, all the while gathering information that would get you one step further in your investigation.

The demo for Coffee Noir covers the first chapter of the game. Essentially, the first 6 days running the company. Players have the option to have the tutorial on, and let the game explain every single part of the game. Or they can opt to go in blind and experiment with the mechanics. Either way you choose how to play it, the game will remind you if you’ve missed a critical part of the business before you decide to turn in for the day.

When creating a profile, the game asks you to set a difficulty. On Easy, you start with 70,000 GBP and a maximum debt is limited for 50%. On hard, it’s 35,000 GBP and 80%. And on medium, it’s 50,000 GBP and 65%. From my understanding of it, easy lets you progress without having to worry about your money situation. Hard limits your early game options, but allow you to make big money plays later on, at the risk of going bust. Medium is a balance between both.

Since this is a demo, you won’t be feeling the stress of managing a business at the very start. Unless you decided to hire every available person for your company on hard mode.

The day-to-day office work is kind of simple once you get your head around it. You, as the manager, have to start business relations with persons of interest. You’ll need to supply them with the coffee blend of their choosing to have a chance of meeting with them.

This is where the management sim part of Coffee Noir takes over. You will be spending all this time in your office, making decisions, and deciding which employee does what to ensure that tasks are done in an efficient and timely manner. In all honesty, this part of the game is already compelling enough. And there’s a reason why you need to performing at peak efficiency. That’s something I’ll cover later on in this article.

At this point, knowing the amount of a certain coffee brand to produce for a certain client is more than enough. Although I suspect, there will come a point when supply won’t meet the demand, so we might be making some hard choices to keep our reputation high.

The meetings are where the game truly progresses. The exchange is framed as a simple business meeting. But its true purpose is to yield information vital to the investigation. And this is probably where the ‘realistic economics strategy’ plays a part. Players have to use what information they know about the client and use it to gain an edge in negotiations.

The problem is, I don’t know anything about sales tactics or its terminology. And having them spelled out to me, just makes my ignorance all the more apparent. I don’t hate it, it’s just that I was never given a proper introduction to them and I don’t really know which one worked until after the meeting, when Oliver gives a recap of what went down during the meeting and what it means for the case.

The only thing that I kinda dislike about the whole exchange is the voice acting. The VA behind Joseph van Haven is hit or miss when it comes to line delivery. One moment he’s doing quite well, and the next it’s like he’s reading straight from a script. The sharps are also something that I noticed every time a word ends with a letter s.

But other than that, it was an interesting part of Coffee Noir that deserves a little more attention.

As for the contract signing itself, you’ll want to the most out of the deal, without looking like a complete amateur. Or you can. It seems like feigning inexperience is a sales tactic. Anyway, the aim here is to secure a contract that is favorable to both parties involved. Though my main take away here is that I could have gotten more if I chose the right talking points and such.

If you feel that something is even slightly amiss with the negotiations, you can always start over again to negotiate for better terms. A successful meeting leads to the potential of more profits for your company, and that in turn allows you to have more flexibility when it comes to acquiring information.

The business in Coffee Noir is a front for the investigation, after all. As it turns out, you’ll need a bit of capital to grease the wheels of justice. Some characters are more than willing to share some very sensitive information to you, in exchange for a bit of monetary incentive.

The interconnectedness of the systems is actually quite impressive. It feels like you need to be at the top of your game in both business and detective work to uncover the game’s deepest, darkest secrets. The things you uncover during your day job have the potential of affecting the investigation, IF you can two and two together.

I haven’t gotten an in-depth look at the white board cross examination, as it was very early in the investigation. But I can already tell that I might be making connections that have some unintended consequences. Just a feeling though.

The comic book style presentation during the case recap is a very nice touch. And it serves as a reminder of what truly matters in the game, just in case you forget about your objective after landing a nice contract. Otherwise I’ll have to constantly remind myself that the coffee business is a means to an end.

In closing, all I have to say is that the idea behind Coffee Noir is very interesting. Having to maintain a certain profit level, but at the core, it’s all about the on going investigation. What it does very well, so far, is striking the perfect balance between profit and progress so that one doesn’t lose sight of the bigger picture.

There are some aspects, however, that we simply cannot explore yet as this is still the demo. Things like keeping employees happy and productive and how much effort are we expected to put when it comes to matching clues together.

These are questions that will be addressed when the game fully releases. Very soon. Until then, I’d say that this game is, at least, worth watching out for.

For more information about the game, why don’t you check out our previous article here. Or you can visit the game’s Steam page.