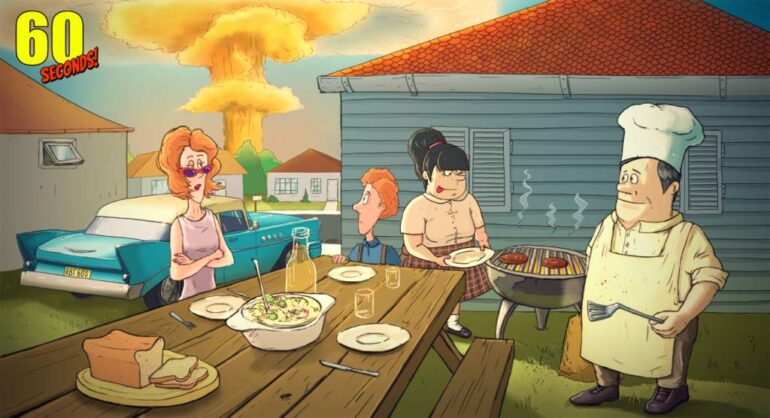 Nuclear and atomic bombs are catastrophic and can destroy the Earth when they are deployed all at once. When the horrific siren alarm sets off, it’s only a matter of time when people get to their basement or an underground place to be safe from harm. Developed by Robot Gentlemen, 60 Seconds! is a dull simulation-decision based casual game that actually wastes 60 seconds of your life.

The game offers 4 modes including the tutorial and these are: Atomic Drill, Apocalypse, Scavenge, and Survival. The game modes are easy to understand as it’s pretty much the same with the other modes: gather and survive. Apocalypse’s goal is to scavenge as much supplies as you can, save 3 worthless NPCs, then survive the boredom inside your small bunker with limited decisions and supplies, if you don’t get the radio first it’s going to be harder to get through the days for survival. 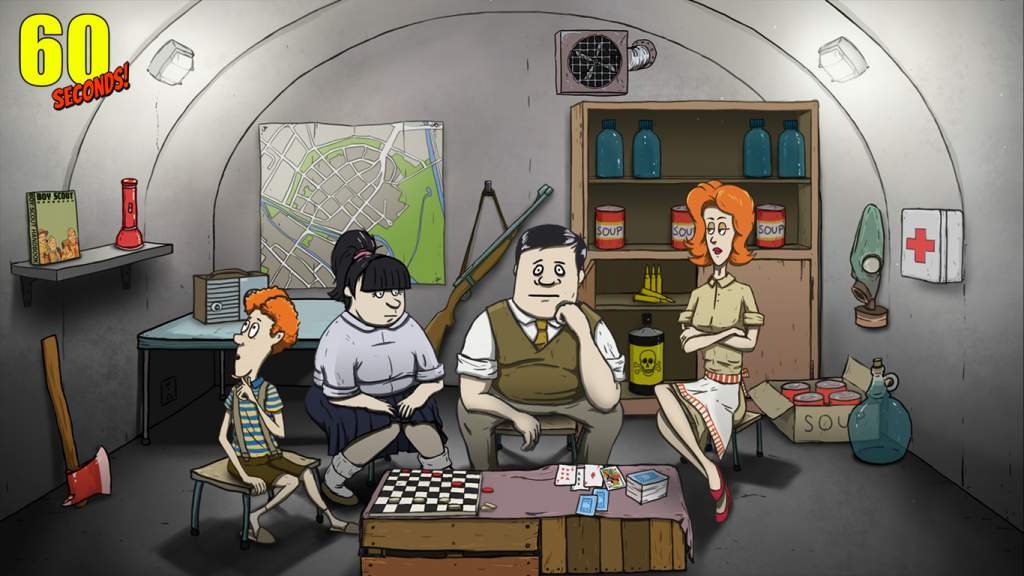 There is Scavenge mode where players will need to loot items for the main character and other burden NPCs who actually doesn’t do anything but to whine and get crazy after a couple of days. There will be no decision-making gameplay in this mode as the game will automatically show you the results if they survived the whole duration of their underground stay or simply died out of “random” things.

Now, the game mode that actually is fun to play was Survival. This game mode skips the irritating scavenging part and starts in the underground area where you are supplied with lots of random materials used for the survival duration. All you need to do is to make reasonable decisions and make great use of the random materials provided to you. The number of items you see in Survival is quite impossible to get on Scavenge and Apocalypse modes.

Part of the gameplay experience is not enjoyable as it gets frustrating as the character movement is sluggish and buggy, especially doing a turn; the character looks like it stutters in every move. Picking up items seems to have like almost a second delay which makes it more annoying. In short, the controls of this game are actually horrible when you’re in the 60 second scavenging part. 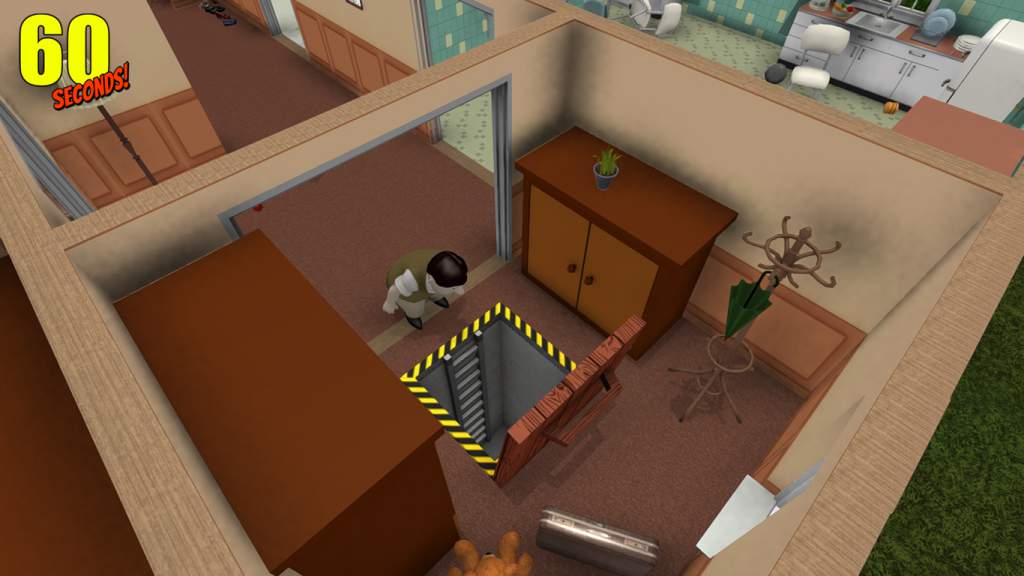 Setting aside the horrible game controls, the main gameplay is almost bad. The catch is to actually survive the whole duration inside the underground bunker until there will be “2” knocks on your door. As what the tutorial states, if you hear 2 knocks that means it’s the rescue team but if it’s not then you and your worthless companions die. Disappointingly, there are no sounds to indicate the said 2 knocks. You will have to read the dialogue on your handy dandy notebook if there was actually 2 knocks.

Now, forget about the knock-knock sounds. There’s this notebook where you make limited decisions throughout the duration in the underground basement. This is where all choices and sacrifices are made. It’s challenging to a point that you’d have to take in consideration on the not-so-useful NPCs status and moods. You can read the repetitive lousy mood status from the characters, make limited choices if whether or not you let your companions starve or die from thirst, random events outside and inside the basement, choose who to go outside to scavenge more items, then repeat.

Even with the bad gameplay, the game’s art design is actually nice. It gives out that cartoonish and humorous atmosphere. Unfortunately, 3D models of the game when you scavenge materials are bad… at least it’s only for 60 seconds plus the wait time. The 3D model reminds me of the PS1 game Dexter’s Laboratory: Mandark’s Lab, if you played this game then you know what I’m talking about.

Between good and horrible, 60 Seconds! is almost horrible. The gameplay and dialogue is repetitive, horrible and buggy controls, and annoying glass-breaking sounds make your whole first 60 seconds of playthrough a waste of your time.