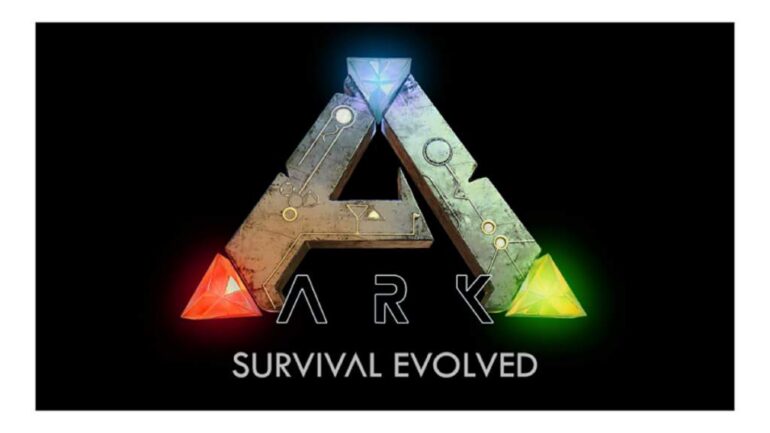 I stood upon a small grassy hill overlooking an azure sea, the tail of some horrifying sea creature arcs back into the water; pterosaurs soar in flight above. Turning to my right, I catch sight of a diplodocus and marvel as it crashes through a forest, leaving trees smashed in it its wake. Suddenly there is a large, naked man standing in front of me. ‘Hello?’ I type tentatively. ‘Hi’ he replies before punching me in the face. Welcome to ARK: Survival Evolved. 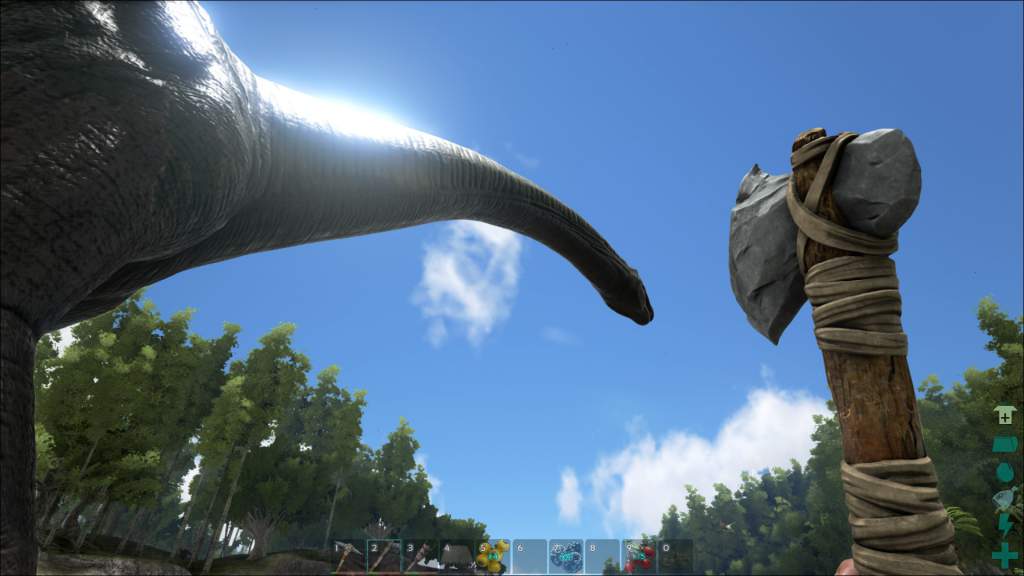 I flee. Not really knowing what to do, I just turn and run. But after running in circles for a few minutes I realise I can’t shake my pursuer and turn to fight him. I land a couple of blows and he backs away, grabs some berries from a bush, and eats them. ‘Clever’, I think, he wants to regen some health… He then drops down dead. Great!

I walk over to his body, wondering what the hell is going on. Turns out he’s not dead, just unconscious and the berries he ate are ‘Narcoberries‘. I’m laughing out loud at this point, and in my good humour I decide to be merciful and grant him a swift death by… err… repeatedly punching his head.

Five minutes into the game and, despite the optimisation issues, I’m already having a blast – I’ve seen dinosaurs, met other people, learned some important things about berries, killed other people – what more could you want from a game? It’s only then that I find out that you press Z to defecate. Amazing! I turn to the corpse of my fallen enemy and, in time-honoured gaming tradition, proceed to enthusiastically commit a war crime.

So, Ark: Survival Evolved is a game that sees you dropped onto tropical island littered with dinosaurs and bizarre alien artefacts and leaves you to fend for yourself. Starting from nothing but your bare hands, you must forge the tools of survival; gather rocks, wood, berries, leaves and plants to make a fire, basic tools, a primitive shelter and simple meals. As you again experience and level up from foraging (often amounting to literally punching the wood right out of trees) and exploring, you’ll get the chance to boost your stats and unlock new ‘Engrams’, which act as blueprints for more complicated craftable items. To put things into perspective, the first tool you’ll make is a stone pickaxe, but eventually you could be wielding an RPG, and sending rockets into the faces of nearby dinosaurs/other players. Although, considering how much time it takes to gather basic resources, it looks like playing co-operatively with others and joining a ‘Tribe’ is going to be the only way you’ll ever do that though.

Any player can form a tribe of their own and invite friends to play co-operatively, gaining bonus XP for performing actions like crafting and foraging near other tribe members. I’ve yet to join a tribe, but only because every interaction I’ve had with other players has ended in murder. Still, other people seem to manage it and they’re off riding Tyrannosaurs around – must be something about my face…

In my time playing, I haven’t got much past the ‘managing to just about survive’ stage where you’re too weak to kill anything more serious than a Dodo (and even that’s a challenge), you’re constantly scavenging for berries to eat and other players are a serious menace. I built a house made out of straw and (in a severe breach of health and safety laws) put a fire in it, and spent my time scavenging for food and not venturing too far from safety, slowly levelling up in the hopes of one day being able to ride a T-Rex.

The day and night cycle adds some variation to this routine. When night falls, you’re forced to stock up on torches, find warmth and shelter and keep an eye out for lurking predators – not really being able to see where you’re going definitely adds to the feeling of vulnerability and it can be especially daunting when you realise that you have no shelter, no food, and you’re freezing to death. There are perks for night time exploration, however. Beams of light mark points on the map where loot-crates are dropped. These are usually filled with tools and supplies and are often worth a night time trek. Without them, it would be very tempting just to sit inside and wait for daybreak. 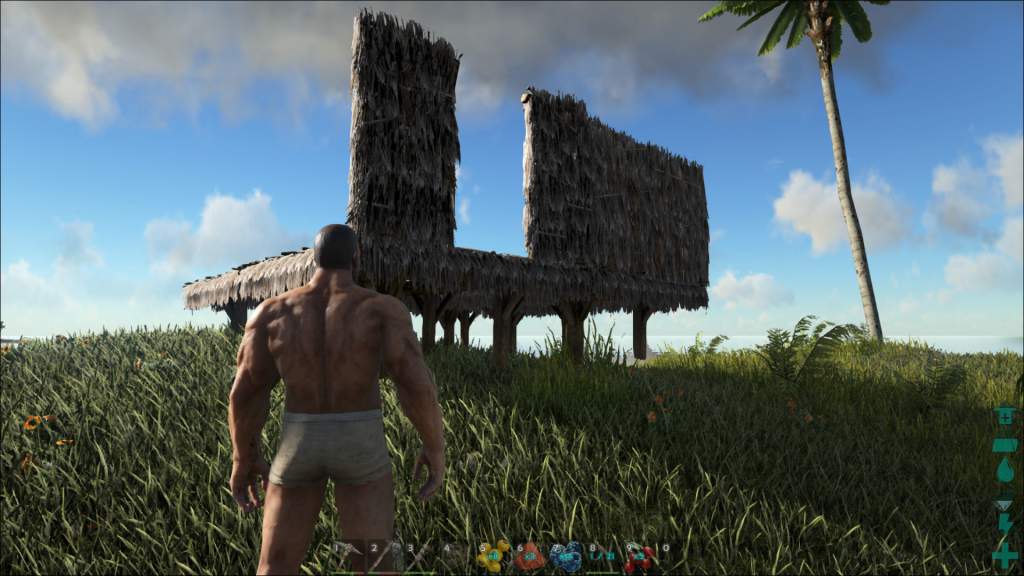 As you might expect with an Early Access title, there are some optimisation issues. I’m running a fairly high-end machine, capable of smoothly running the Witcher 3 on ultra, but in ARK:SE, I get around 20-30 fps. Apparently this is a well-known issue and the developers do seem to be pumping out updates and patches every other day or so – it’s already running better than when I started playing. Messing about with some of the settings also improved, but the performance is still sub-par and leads to my eyes feeling grainy after an hour or so of game time. The low fps can also cause problems in melee combat – frantically trying to land a punch of a dinosaur’s face is only made harder when it feels like you’re watching something that’s already happened. Aside from these issues, the game does generally look gorgeous, with a colour palette that appears similar to Crysis or the original Far Cry – bright leafy greens, sandy beaches, blue waters, etc.

The dinos themselves all look realistic enough if they stand still, but some of their animations need a bit of work. Pterosaurs fly in sort of m-shaped patterns, and rarely higher than about 20ft. The really big dinosaurs, whilst impressive, lose some of their majesty and begin to look downright derpy when they move, with legs not quite reacting properly to the slope of the terrain under them and tails and necks passing harmlessly through tree trunks as the big beasts pirouette on the spot. Still, this game is very much in Early Access and (judging by the rate of patches) I’m confident that most, if not all, of these issues will be addressed eventually.

My only other gripe with the game so far is that the official servers appear to be perpetually full, meaning you’re left with a choice between waiting or playing by yourself.*

Which, considering the brutality of other players, probably isn’t entirely a bad thing…

Overall, Ark: Survival Evolved has great potential. It’s a gorgeous-looking game with a great (if not entirely original) concept. If you have a high-end machine, then it’s probably worth getting now, but if you’re playing on a potato then you might want to wait until a few more optimisation patches come out before getting out your wallet.