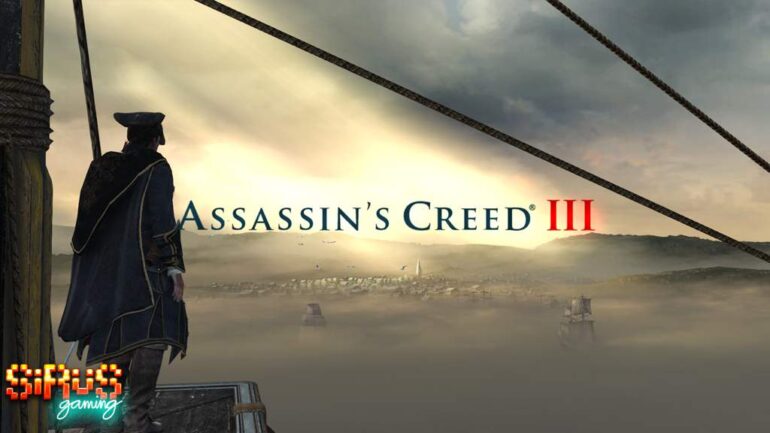 To conquer… To liberate… To seek freedom… For Independence!

This quote certainly relates to what Assassin’s Creed III‘s story is. The third official installment of Ubisoft’s stealth-action adventure holds many fictional historical conspiracy theories. Reliving the past and the American Revolution is one step to partly knowing the history of America.

Assassin’s Creed III is an interesting adventure stealth action game that is based on actual historical events. With the added fictional twists, it made the narrative interesting to follow. The game starts off with a British loyalist assassin Haytham Kenway embarking to the American soil with ulterior motives. Along his journey he met this native woman who would eventually give birth to his son. Their child, this half-bred British Native American Indian, is to fulfill what the Brotherhood has long started. The game takes about 10 hours to finish the game without doing Assassination Contracts or discovering watch points. The game still holds a great database of historical events like the American Revolution, famous people like George Washington, and more about America’s struggling times brought upon by British colonization.

Assassin’s Creed III’s gameplay didn’t change so much than what I would have expected from it, being the third installment of the series. The climbing of trees and exploration was one thing they’ve focused more since the land of America was still full of wilderness. Hunting was also part in the gameplay which makes a great asset to the player if they need materials to craft items. The game still includes crafting and also a recruiting system where you can hire people to side with you on your cause and do assassination attempts to your enemies similar to Assassin’s Creed Brotherhood. The assassination options still include air assassination, backstab with the wristblade, and killing the enemy from the edge. Missions are challenging and it tests your patience and quickness if you want to achieve all optional goals to achieve Full Synchronization status.

One addition to the game’s feature I really had fun with was commandeering a naval ship like the ones that we see in the 4th official installment, Assassin’s Creed IV: Black Flag. Take down enemy boats with the ship’s brutal cannon balls and sinking them in the depth of the sea with all it got lads! But there were only a few counts of main missions that happens on sea. It made this new feature unfortunately a bit weak since it never truly made any historical significance to have this remembered.

The vast openness of the game is larger than the previous Assassin’s Creed titles offered. The cities and forests can be explored thoroughly if wanted. You can either walk during the snow days on the road, ride a horse to make the journey faster, or do fast travels to skip the long stroll. With massive cities comes with lots of NPC roaming around in New York and especially in Boston; but this has made the game a bit unstable. The massive NPCs drop the game’s framerate below 30FPS on PC and you would notice the massive frame drop or lag if you play the game on 60FPS. Even with the unplayable framerates dipping down 25FPS, Assassin’s Creed III‘s experience improves massively if you lower the frame rate to 32FPS. I hardly notice the frame drop when I stroll through Boston and it was great enough.

While the game progresses, there are certain missions where you can take control of groups of Patriot members to repel or defend the area. Being responsible for their lives can also be one of the challenges that you will need to take as it can be used against you by their all-loving commander-in-chief, George Washington.

Ubisoft’s great deal of concentrating with improving graphics is one of the aspect that Assassin’s Creed III retains. It’s not your best graphics of the year game, but its graphical details make the game alive and attractive. There are times when plants or grasses have jagged edges. Maybe because the anti-aliasing was set to a minimum to improve on gameplay? Well no, even when the anti-aliasing is set to High, it only improved a little and it made a horrible performance hit even from a dual R9 290X GPU gaming rig. Despite the lack of graphical optimization, Assassin’s Creed III’s soundtrack was one worth listening to. The main theme’s tenacity and wildfire adrenaline makes the game appeal to its setting in the American Revolution era.

Even after the game’s main story arc, the gameplay still goes on and it allows you to go back to cities and places in the wilderness to unlock secrets, discover towers, do assassination contracts, and finish the game 100%. This makes the game enjoyable even without the main story missions.

Overall Assassin’s Creed III didn’t flunk out the stealth-action game with its lack of optimization. The game is a decent open-world stealth action adventure that makes you relive the moments of the American Revolution. The replay value of the game is so solid that it can make you play the game again to get 100% completion rate. It’s definitely worth the money and time if you want to learn more about the American Revolution. Assassin’s Creed III made me stay put to play the game during my two days off from work just to finish the story.