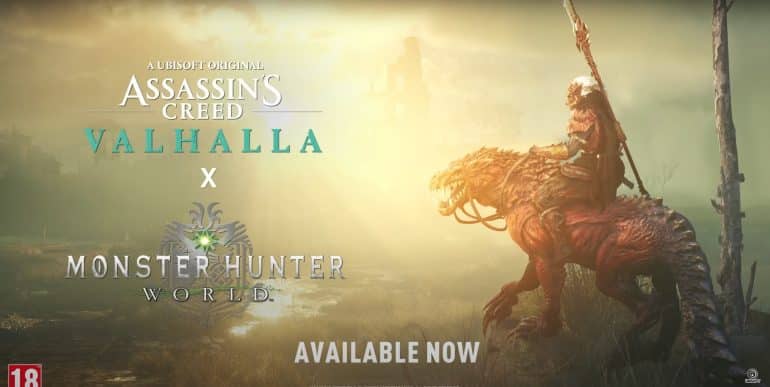 Ubisoft and CAPCOM have recently announced their new crossover event between Assassin’s Creed Valhalla and Monster Hunter World. The content is now available today via a free update on AC Valhalla. In the event, players are able to dress up Eivor, their mount, and scout in skins that were designed from the iconic monsters in MH World.

The official Twitter account of Assassin’s Creed was the one to break out the news of the availability of the event today. A new video was also attached to the post, but there was also a new video uploaded on the official Ubisoft YouTube channel. It showed Eivor wearing an armor set inspired from one of the monsters in MH World, the Odogaron. The horse has a mount skin that would make it look like an Odogaron while the scout has a cosmetic skin that would turn it into a very small version of the ice monster Legiana.

The video showed other content inspired by Monster Hunter World. There are weapons called the Garon Hatchet and the Garon Rod, which are based on weapons in MH World. The designs have been changed to fit with AC Valhalla.

This content was actually datamined previously. It revealed that AC Valhalla will get new armor sets based on Destiny 2 and Monster Hunter World. They were proven true after both contents were implemented recently.