Atelier Sophie: The Alchemist of the Mysterious Book – Review 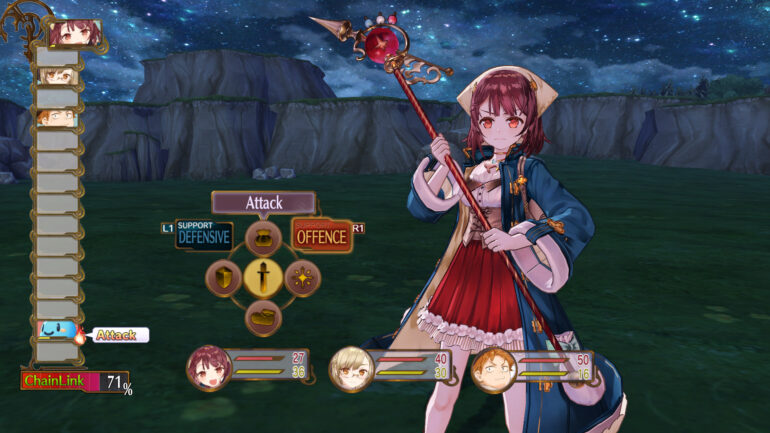 Atelier Sophie: The Alchemist of the Mysterious Book is the latest installment in Gust’s long line of Atelier games. The Atelier series unlike other JRPG’s are not known for epic storylines or complex battle systems. It is a series more famous for a more character driven, more personal storyline while having an engaging and complex crafting system within the game. Outside of these 2 things the Atelier series also consistently has a time management system within its mechanics. Atelier Sophie follows the tried and tested formula of the series while adding its own variations and twists into the game.

First off, let us discuss the general details of the game, graphics wise the game looks good enough with a colorful environment and cast of characters that contribute to an optimistic and upbeat in-game atmosphere. Musically, the game has a great soundtrack as is expected of a Gust title. The music is often upbeat and cheerful maintaining the game’s atmosphere. Story wise the game has a decent enough plot where in Sophie finds a mysterious talking book in her grandmother’s workshop. Sophie deciding to help the talking book decides to fill it up with alchemic recipes to regain the book’s lost memories. This sets the tone for most of the game. Although the game does have its serious moments for the greater part, the game is content on having an episodic, easy going pace and more laid back game. The games combat system is a turn based with the addition of a stance system, where in you choose either an offensive or defensive stance before each action adjusting based on what actions your enemy does. And while this intends to include an element of strategy into the game’s combat, it fails in its execution. As your characters and your enemies move in a single turn making adjustments difficult and frustrating. A support system is added into this stance system but given the nature of its base system it adds little in terms of strategy within the game’s combat mechanics. It is far easier to disregard this system and play around it. The game overall runs well enough on the vita. It doesn’t suffer from any major problem that takes away from the game experience though the game’s frame rate stutters at times it doesn’t take away much from the experience. 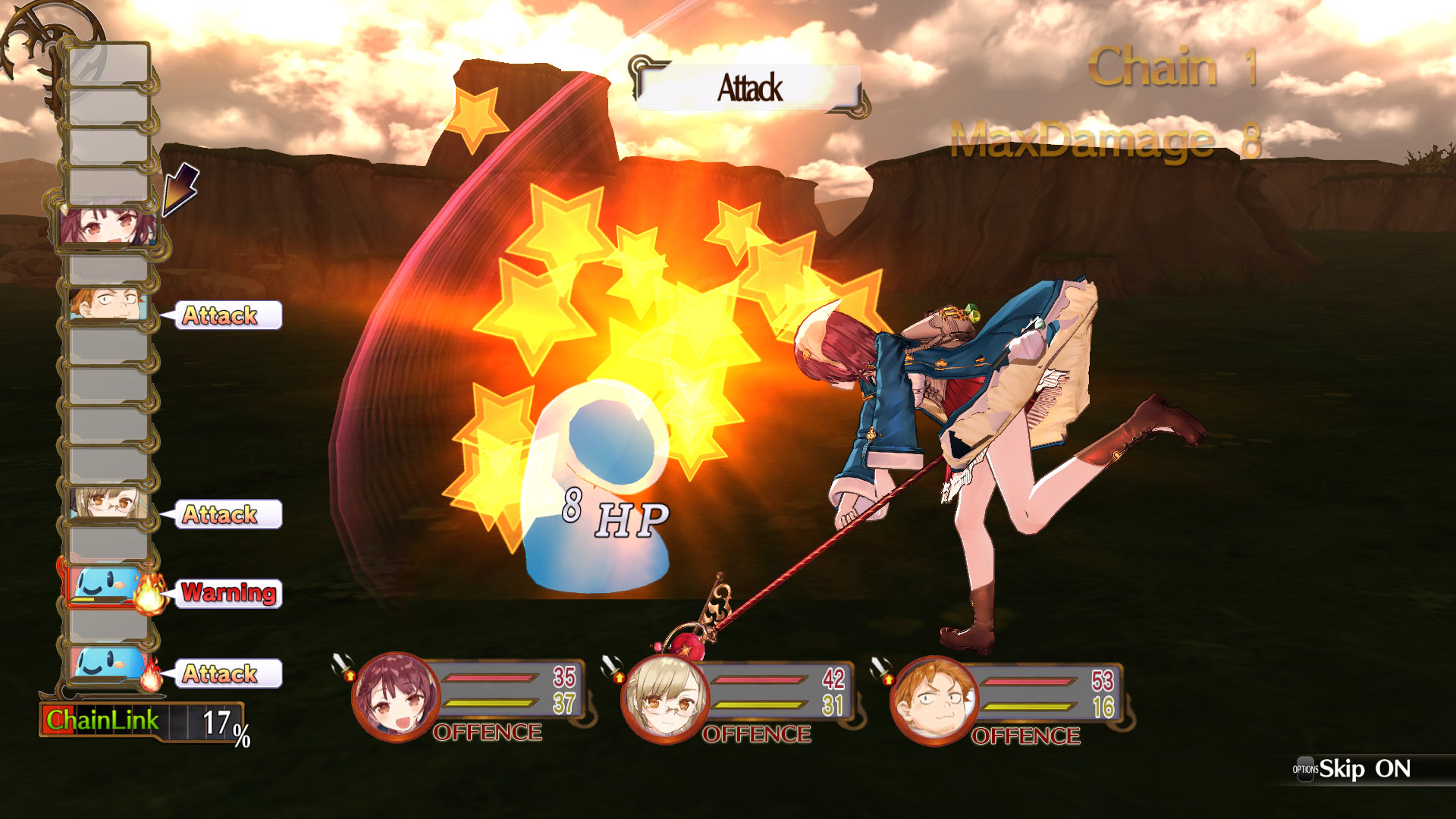 Now, let’s discuss the major characteristics of an Atelier game starting with its cast. The cast of Atelier Sophie is interesting enough with a rather diverse cast of characters and personalities, from the main heroine Sophie to the mysterious book Plachta. The game’s cast each have their own character events that can add to their story while periodically adding to the person’s skill set. These events are triggered by talking to the characters periodically and improving their relationship with Sophie. The characters themselves are interesting enough at the start of the game with their little quirks however they are fail in getting away from their specific character stereotypes. The game does, however, lets us know more about these characters prompting us to become more connected to each character even with this character stereotyping. The sub-events that let us get more insight into these characters while, definitely a welcome addition are sporadically found within the game. The game gives no insight on when and where these events may be found. This forces the rather tedious task of going around and talking to each character periodically for the sake of their events.

Next, let’s discuss the time management system in Sophie. The time management system in Sophie separates a one month period into 30 days grouped into a week with a weekend wherein more events may be triggered. The day itself is divided into a segment of hours with 4 major segments. The segments divide the game into a morning, afternoon and evening times. Each time affects the type of items that can be found within the field as well as what monsters spawn. The game also has a weather system that affects these things ranging from a normal day to a rainy day. It’s a simple enough system and it adds an additional element into the game. The only problem being that this element of the game serves little purpose as the month cycling back into day one means there is no way to miss events or to miss certain conditions making the system seem more like a superfluous addition. Not much would have changed had this system been removed. This also hurts the game’s replayability as unlike previous games there is no need to replay it in order to find missing events or to complete certain tasks that you were originally unable to in your first run through. 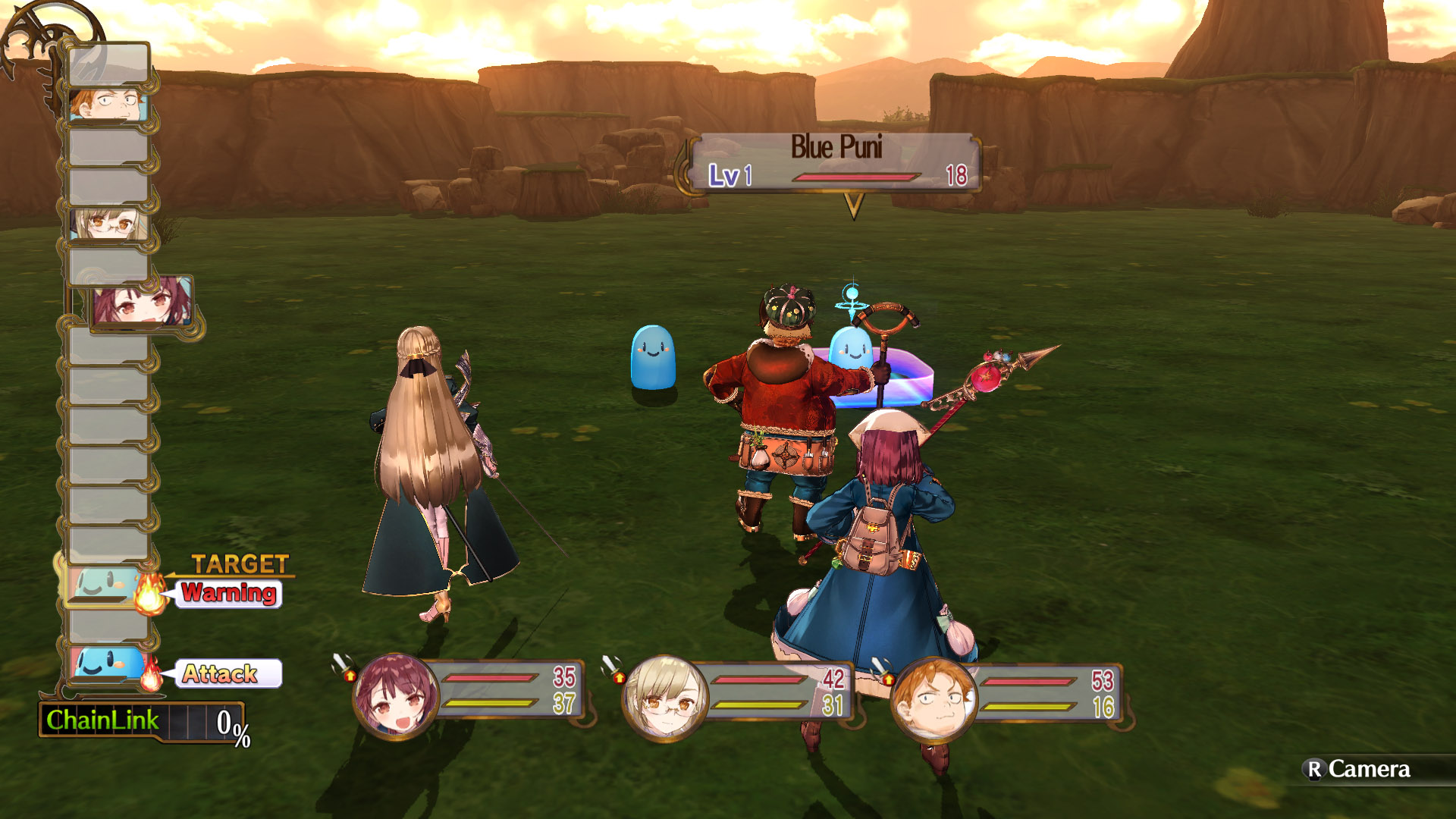 Finally, let us discuss the Alchemy system of the game, starting with material gathering. Gathering remains much the same as in previous games where drops can be found within the games maps or are buyable in the shops or are available as monster drops. The difference in Sophie is an addition of a progression factor, the more time you spend gathering in an area without leaving the better the quality of materials you can pick up though this comes with the added risk of increasing enemy strength. And while this system may sound good on paper, execution wise it can be frustrating as the progression increases rather quickly and the enemies can become strong quickly which can end in a party wipe in case you aren’t careful. After gathering is finding the recipes to perform the crafting and here Sophie is somewhat different from its predecessors where in before recipes could be found either through books or events or through crafting certain items.

Sophie makes use of an item tree where item recipes can be discovered by performing specific actions, each recipe serving to unlock the conditions of discovering the recipe besides it. This system becomes the bedrock of your journey as your primary goal is to discover the recipe of certain items for each period resulting in the story progression. And while this is an excellent idea, again the execution falls flat because of the linearity of the recipe progression. 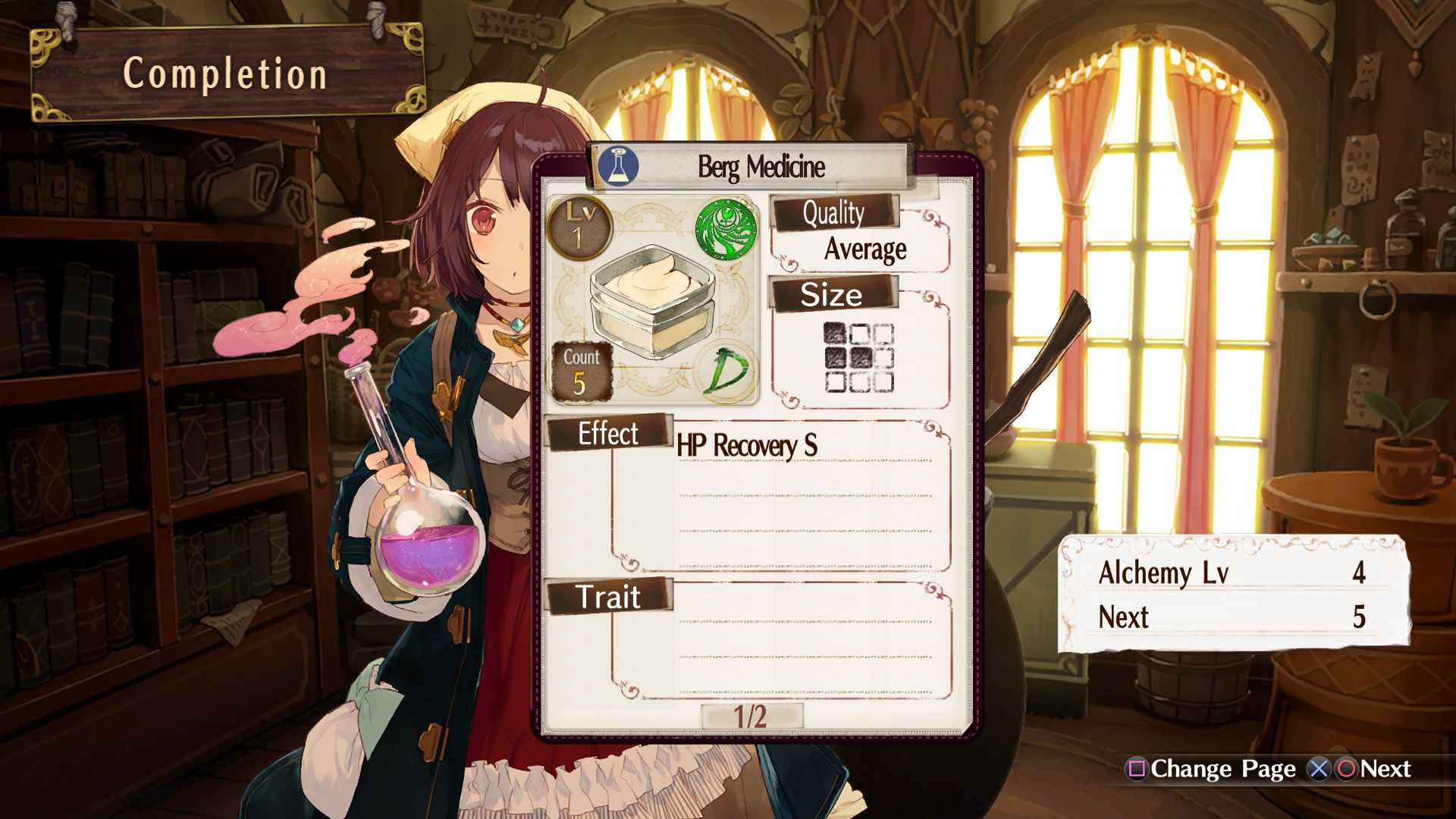 Moving towards the crafting feature itself, it remains similar to previous installments where the player chooses what specific materials to use, of what quality and of what traits as should be inherited. An addition to the game is a type of grid lock puzzle where you insert each material. This adds a further element into crafting, making you look into more information on the material outside of the trait and quality in the form of the shape of the materials as each cauldron allow a different shape to allow different materials to fit into each. Each material must be accommodated into the cauldron or it would be an instant failure for the crafting. This system also adds the variable of order into crafting as the order which you place materials into the cauldron affects the end result of the item one is producing. As expected of a game with a heavy emphasis into crafting Atelier Sophie has a robust number of items, each with different traits and characteristics to discover, all in all creating a truly immersive crafting experience. And as expected of a game with such heavy emphasis into crafting, the items that the player produces are oftentimes the best way to deal with the monsters within the game.

In conclusion, while the game has flaws most of which stem from a cluttering of systems being placed into the game. The immersive crafting experience and colorful characters still makes it an enjoyable experience. If the player doesn’t care much for combat and prefers a crafting experience Sophie will be a truly good title to have in one’s library.

This review is based on a review copy provided by the publisher.