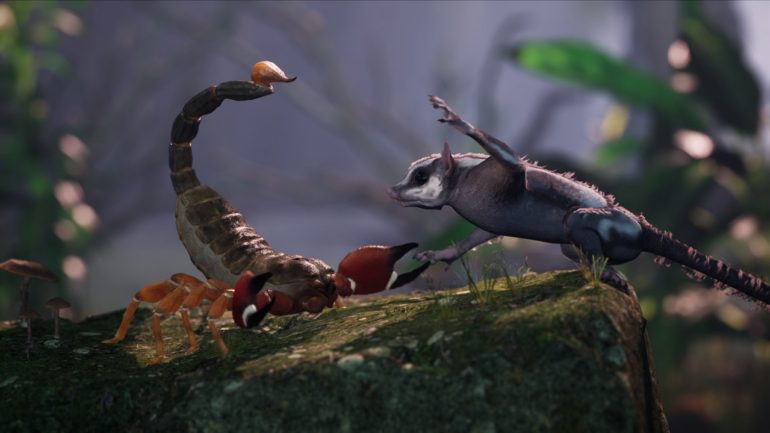 Game studio Breaking Walls recently released a brand new developer walkthrough showcasing the life of a sugar glider in AWAY: The Survival Series.

Players can enter their own personal nature documentary as they glide through the forest as a sugar glider. They can also sneak past predators, and hunt down their prey as the narrator describes their movement throughout the game.

AWAY: The Survival Series is an exploration adventure set in a distant future where nature has reclaimed the planet. Playing as a tiny sugar glider, soar across misty chasms, leap from tree to tree, and climb to the top of the forest canopy as you embark on a journey to save your family.

As you brave these untamed lands, you will have to hunt down small prey, fight larger enemies, and hide from apex predators. Jump, climb, and glide through your environments as you solve navigational puzzles and make your way through the dense wilderness.

Along the way players will uncover the mysterious remnants of a fallen human civilization. While most of the game is played from the perspective of the sugar glider, there are brief sequences where players can control other animals and insects, such as beetles, lizards, foxes, crabs, and more. The world of AWAY is vast and wild, and there’s something new to discover around every corner.

“AWAY: The Survival Series has been inspired by contemporary nature documentaries such as Planet Earth, Blue Planet, Life, and Our Planet, offering players a truly immersive and cinematic take on a nature adventure,” said Breaking Walls Co-Founder and Creative Director Laurent Bernier. “We want AWAY: The Survival Series to truly embody the wonder, majesty, and perils of the natural world. We look forward to showing you more when AWAY launches in early 2021.”

AWAY: The Survival Series will launch in Early 2021 for PlayStation 4 and PC.