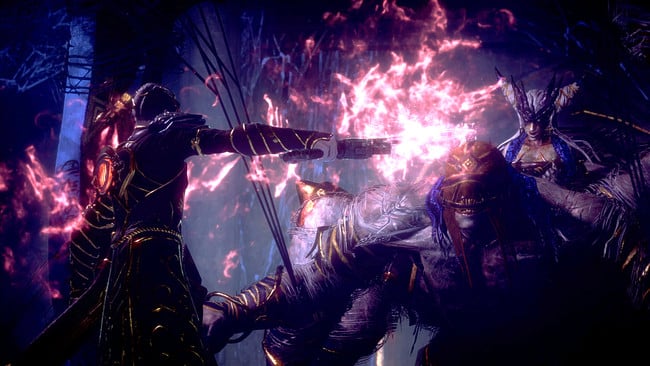 What is BABYLON’S FALL?

Babylon’s Fall is the latest title from NieR:Automata developers PlatinumGames.

Join a group of warriors bonded with special equipment called Gideon Coffins in an odyssey to overcome the titanic Tower of Babylon.

Wield unique weapons in each hand and use the power of the Gideon Coffin, allowing for combinations of up to four weapons at once and endless strategic variation to combat.

The unique game visuals are achieved using a newly developed “brushwork style” to create a unique fantasy setting with a medieval oil painting aesthetic. Play in co-op online multiplayer for up to 4 players.

Online multiplayer, which can be played by up to four players, is scheduled to be updated regularly after its release, and once purchased, addiitional game modes can be played at no additional charges. In addition, the difficulty level of online multiplayer is automatically adjusted according to the number of participants, so players, both solo and in teams, can enjoy themselves.

A thousand years after the destruction of the empire “Babylonia”, which once built a tower higher than heaven and ruled the world, the Domitinia empire was eager to excavate the heritage that sleeps in the tower that was a symbol of its glory.

But there were two barriers. One is the existence of the monster “Garoo” that hunts humans. And the other is the spread of the incurable disease “Blue Death Disease” brought about by blue sunlight.

As a captive of the empire, the player carries a device called the “Gideon Coffin” on their back. By using the power of the device, they become “Sentinels” to fight Garoo, and falls to the fate of capturing the “Babylon” tower.

Babylon’s Fall is set to release on March 3rd, 2022 on the PlayStation 4, PlayStation 5, and PC (via Steam). For more information on the game, check out their official site.