Back 4 Blood Tunnels of Terror DLC Expansion Launching Next Month 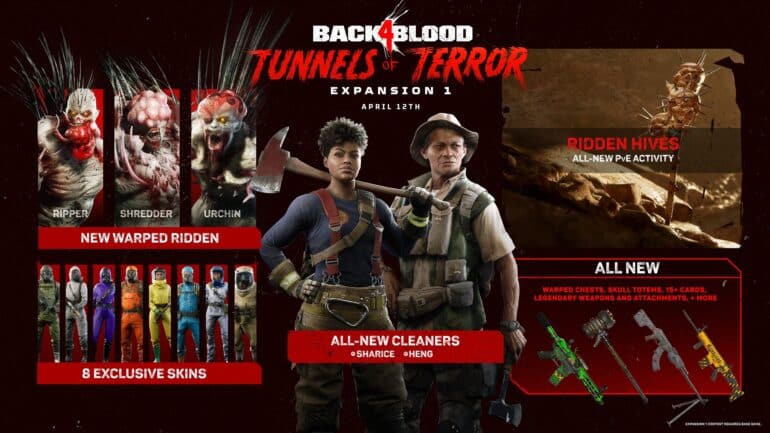 Turtle Rock Studios and Warner Bros. Games have announced the new Back 4 Blood Tunnels of Terror DLC expansion and its details.

First off, Turtle Rock Studios is now celebrating its big milestone for Back 4 Blood as it gains over 10 million players since its launch last fall. To celebrate, the developers have revealed its first major downloadable content expansion called Tunnels of Terror. This will be released next month, April 12, 2022. This is part of the Back 4 Blood: Ultimate Edition, Back 4 Blood: Deluxe Edition, and Back 4 Blood Annual Pass. It can also be purchased as a standalone item.

“To achieve such a milestone in the short time since the launch of Back 4 Blood is a historic event for our studio and this franchise,” said Turtle Rock Studios President and General Manager, Steve Goldstein. “As we look ahead, we’re excited to keep the momentum going with our upcoming expansion, Tunnels of Terror, which will offer more cooperative content for fans to continue cleansing the world of the Ridden.”

Tunnels of Terror will offer a new co-op activity called the Ridden Hives, which will let them explore seven different dungeons full of labyrinthine tunnels below the depths of Evansburgh. These tunnels are infested with the new Ridden type called the Warped Ridden. Claim all the exclusive loot and rewards that can only be found in Ridden Hives, but they must first outmaneuver and overcome the new Warped Ridden, the landmine-setting Urchins, Shredders, and Rippers. The Warped Ridden will also be available in PvP Swarm mode.

Two new Cleaners will be available, who are Sharice, an axe wielding firefighter, and Heng, a restaurateur with a tough hide. The expansion will offer eight exclusive character skins, seven new legendary weapons, 12 new weapon skins, new cards, and a lot more. There is also the new update that will add the No Hope difficulty setting. Players who have the expansion can make other players who do not have the expansion play it as well. As long as one has it, everyone else can try it out.

There will be no microtransactions of any kind, cosmetic or otherwise added to the game as part of this expansion or any future content update. So fans will not have to worry about this.