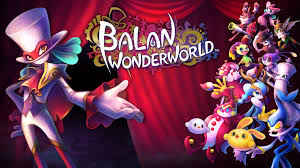 It’s crazy to think about how periodically sporadic platforming games arrive at us now, albeit still at a pretty consistent rate when they were all the craze back in the day. Times change things constantly, it seems. Nowadays, a vast majority of the yearly releases we see consist of heavy-packed action games. That’s not a complaint, mind you. A lot of the action games recently were actually very phenomenal. Just take a look at our review page for reference. Every once in a while, though, a game like Balan Wonderworld comes out, and it comes at such an opportune time to satisfy our need for nostalgia.

Balan Wonderland is a platforming game developed by Balan Company and Arzest, and published by Square Enix. The first thing I immediately noticed while playing the preview of the game is how generous it is with color. Everything you see almost pops outs of the screen, and not in an excessive way. The color is almost… necessary for this world. The art direction for this game is blatantly and shamelessly exuberant. It’s glorious and I love it.

The preview does set-up a sort-of theme to what the story of the game is going to be like. Unfortunately, with this preview itself, the themes seemed like an afterthought rather than a central theme. You do, however, get a semblance as to the significance of your actions on each level and it involves a farmer character that you won’t really learn much about. At least, in this preview anyway.

The gameplay itself is where the game provides hopefulness and excitement. If you enjoyed games such as Sonic the Hedgehog and Super Mario as a kid, or even until now, you’ll get a kick out of this game. Costumes also play a large within the gameplay itself. Each costume will provide you with an ability, and that ability is necessary to get over an obstacle so you can complete the level. Like all games with decent ways of teaching its players how to progress, each of these costumes is introduced to you right before you’re going to need them.

Each of these costumes is incredibly unique and have their own usefulness. A few of them are more combat-centric while some of them are strictly for platforming. The fun part comes when you manage to hold on to multiple costumes and once and figuring out which one is appropriate to use in a given situation. It allows you to be mindful and calculating and games like those are always such a delight to play.

There are a few instances where the game will start to feel like an action game, almost. A very subtle one at that. There are even boss fights for you to overcome, but those also require a little bit of puzzle-solving to complete.

Now, the preview demo isn’t very long. It’s just a spoonful of perhaps an entire tub, hopefully, of what we will see once the full game releases. While it does offer surprises and an enjoyable experience, I hope that the full game is going to reveal many incredible things that were hidden from this preview.

Balan Wonderland won’t come out until March 26 of this year, but there’s a demo available you can play right now. So, I’m going to end this preview by saying that you should go ahead and play the demo for yourself. It’s very brief, but it’s going to give you a glimpse of what the game is going to deliver.