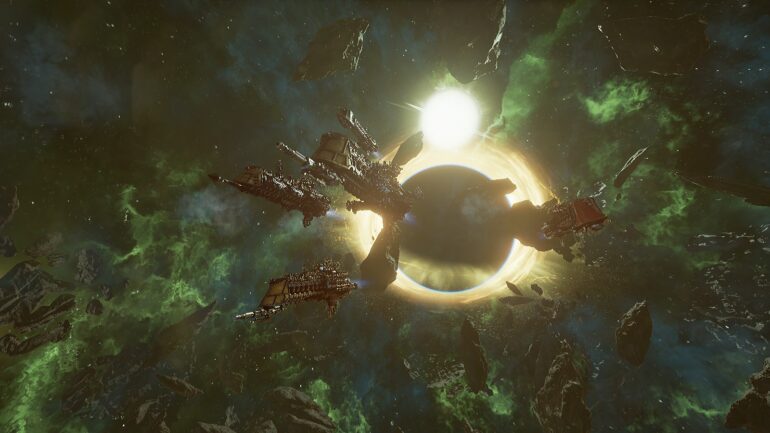 A millennium of war, the enemies of man are once again at its doorstep — the foul Ork warbands, the warp machination of the Eldar and the traitorous legions of Chaos, and many more horrors. Sitting upon the Golden Throne of Terra is The Emperor, eternally vigil over mankind and their worlds while rotting away. Although confined to the Throne, he has many arms that carry out his will. One of these arms is the Imperial Navy, whose brave men and women serve to protect the space ways from pirate and worse. For in the grim dark future, there is only war.

Battlefleet Gothic: Armada is a real-time strategy game developed by Tindalos Interactive and published by Focus Home Interactive. Set in the expansive war-torn ridden universe of Warhammer 40K during the onset of Abaddon the Despoiler’s 12th Black Crusade, known also as the Gothic War, and based off a specialist table-top game by Games Workshop. As with the table-top game, Battlefleet Gothic: Armada is all about the different ships and fleets of the Warhammer 40K universe. Surmise to say, the gameplay is line ship combat in space, and it works very well. 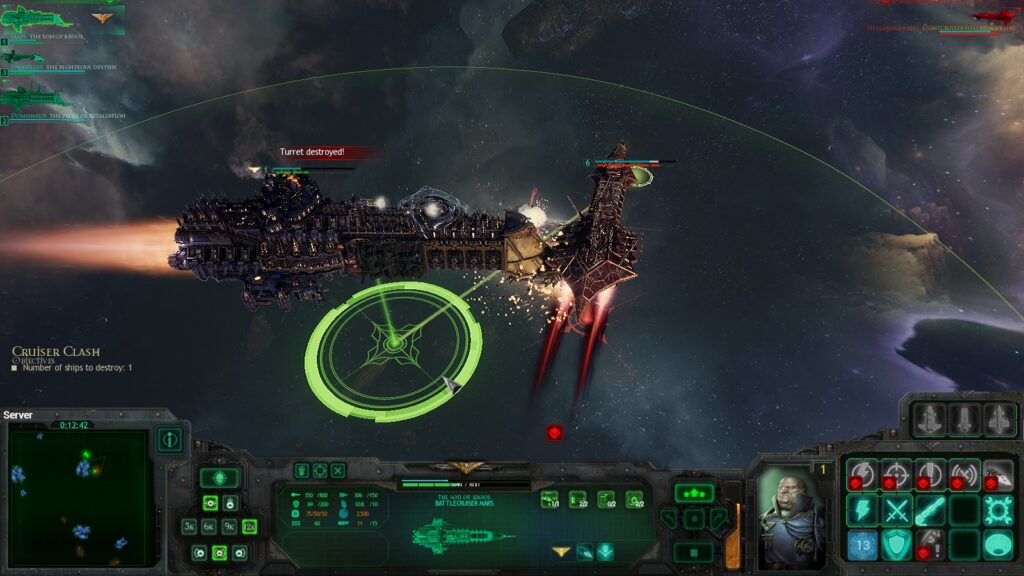 Combat in Battlefleet Gothic: Armada is all about knowing the strength and weakness of the ship and micromanagement. There are four primary races currently playable in the game, the Imperium of Man, Chaos, Orks and Eldar. Each race have ships that are similar in class, such as cruisers, battleships and the like, but each race’s ship play differently. The Orks for example are slow cobbled up monstrosities that can take a lot of damage, but are slow and the crew are more likely to run a mutiny against you. On the other hand, the Imperium ships excel at ramming and close ship to ship combat, but are poor at long range battles. Then you also have the different kinds of ships, many with sub-classes that would give additional gun batteries or abilities like torpedoes or launch bays for fighters and bombers. Confusing? A bit, but it should not be a big issue. Many of the sub-classes share a similar hull, but only vary in which weapons it has, and abilities. Take the basic Imperial Dauntless-class light cruiser, it comes in two flavors: one with the armor piercing lance lasers and the other with torpedoes. There is no better ship, but it would boil down to what is your preference and strategy. Do you like getting up close and personal, or have the ability to launch long-range torpedoes? Each has their pros and cons, and to some it would be better to field a balanced fleet, but it all depends on your choice. The big ships, starting from light cruisers are the ships of the line and the big heavy hitters of the fleet, however limited. And forming the back bone would be the escort ships, which are frigates, and for the most part are disposable.

Battles are done in a 2D plane, but factor the gameplay and you can see why it works better than playing on a 3D one. Battles are frantic and hard. Frantic since every ship must be managed, from automated actions like from which range to start firing, to abilities, and a lot of these abilities must be manually aimed and are not auto-targeting. Launching a volley of effective torpedoes requires that the ship must be maneuvered into a desired position and then the shot must be lead as torpedoes are slow moving projectiles. Stasis fields, plasma bombs, Nova-cannon shots have to be carefully laid to compensate for the timed delay the actions take, and it would not be a surprise. Not only must you manage this, but you must also manage the movement of your ships to prevent collision with allied or enemy ships, do a timely high energy turn to dodge an incoming torpedo salvo, maximizing your weapon angles and you could be doing all three at the same time. To aid you, you can slow down time, giving you the chance to set down orders to dodge or pull off a tight turn. It can be activated at any time and has no time limit, but that does not stop the ferocious and unforgiving AI. Even at Normal difficulty, expect to lose a lot of your battles as the AI will out-manage a new admiral playing the game, even veteran admirals for that matter. The AI’s ability to out-manage is much more obvious in large scale fleet combat where there are multiple ships. On countless occasions, I would forget or leave a ship on its own while I concentrate on another engagement. There is an option to automate the ship to do its own thing, but it is still a high risk as the AI will choose a ship to engage, and it can be a bigger ship. Ships that are destroyed hurt you, particularly in the campaign with the constraint on resources. You can evacuate heavily damaged ships, but it puts it at risk of being lost in the warp, however it is better than assuredly losing a ship. 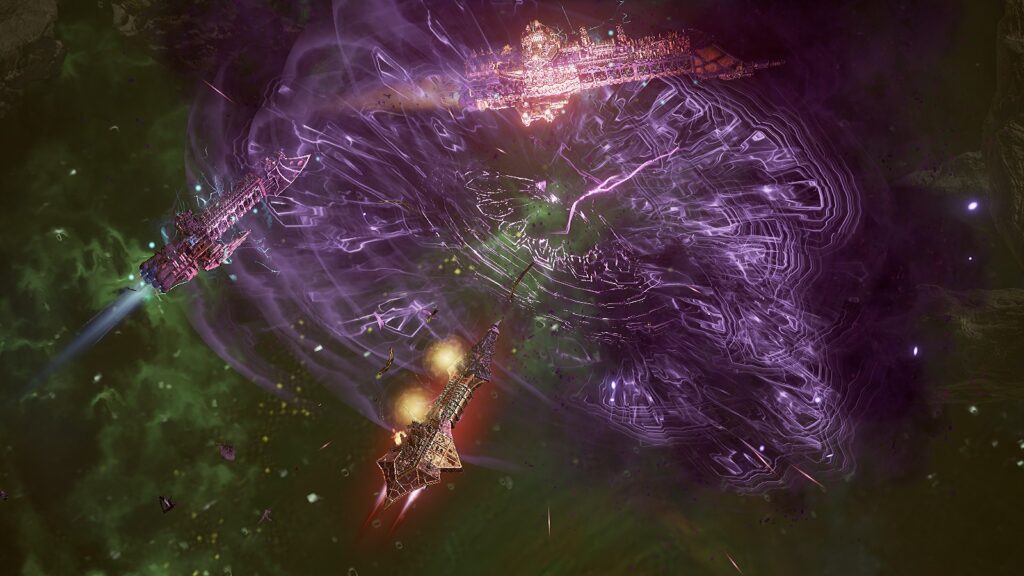 The game has an included campaign which puts you as an admiral of the Imperial Navy in the Gothic sector. Missions are selected in a galaxy map of the different systems in the sector but you are limited in how many deployments that can be done per turn. While the passage of time does not have any effect like earning resources, it advances the events through-out the sector and the game’s story which are rendered in fully-voiced painted cut scenes. The story is spot on and is strong, although the main event takes several hours in. As with the story of the table-top it is based off on, the Imperial Navy is out-matched and out-gunned by not having enough ships to police an entire sector and fighting against multiple enemies at the same time. Whether it be deserting Imperial forces, Ork Freebooters, Eldar Corsairs or Chaos itself, you, as the admiral must hold the sector together by any means necessary, which also means save-scumming to the previous save to prevent a disastrous defeat that could cost losing a line ship. Either than the included campaign, the game has custom game and solo skirmish, not to mention multiplayer. These modes are much more focused on the battles and do not have any campaign map. 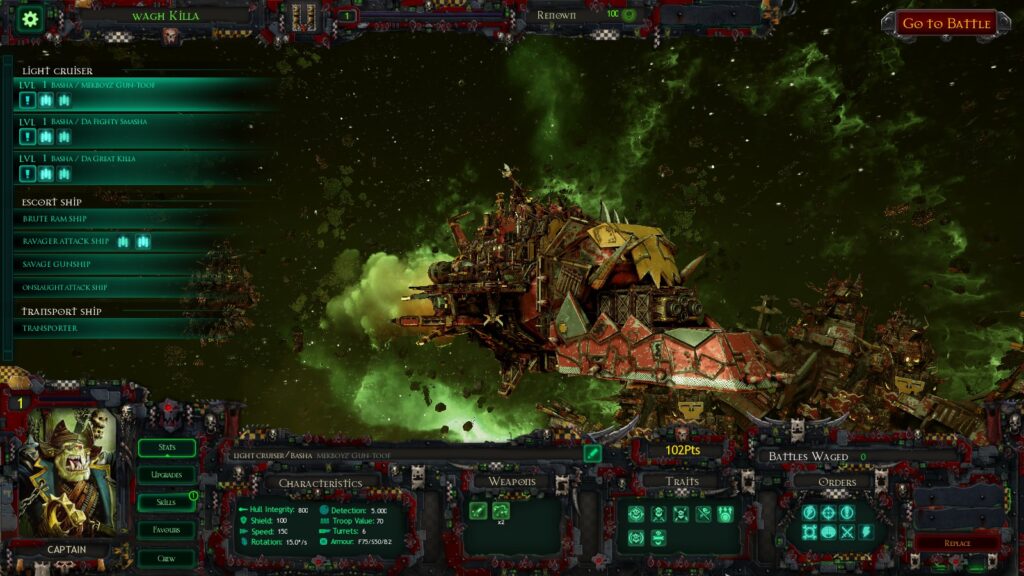 The game’s visuals are stunning, with the game being powered by Unreal Engine 4, it should be no surprise. The details of each ship is a delicious sight to behold, even the Ork’s floating piles of garbage can be admired for the attention on the detail of each model. It should be noted however that the game’s anti-aliasing is horrible and setting it to maximum often leaves a blurry mess. Toning it down to a lower though shows all the details much more clearly and to some will be much more acceptable than a game without aliasing. Sound is rich, which cannons have a good boom and sharp cracks of laser fire, more so with explosions. On top of that, the voice acting both in the campaign’s cut scenes and in-game units is superb. The acting is spot on for identifying characteristics as described for each race: the Imperium with their British accept, the raspy voices of the corrupted Chaos, the wild barbarian yet witty nature of the Orks and the aloof nature of the Eldar.

Battlefleet Gothic: Armada hits a soft spot in my heart. It requires patience and mastery. Add that with superb writing and voice acting, amazing visuals powered by Unreal Engine 4, and very resounding sound effects, Tindalos did an amazing job in bringing this property of Games Workshop to life.