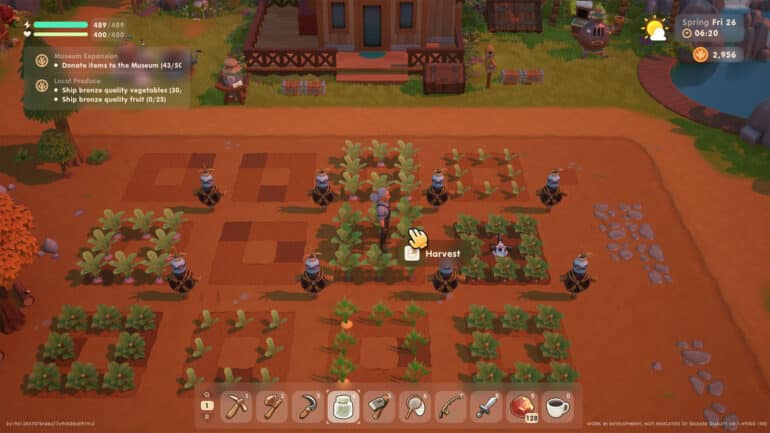 Money is important in both real life and while playing in Coral Island. Thankfully, there is only one form of currency within the game and it’s easy to earn. However, it is also easy to spend, and without knowing any lucrative ways of earning money fast, progressing through the beginning seasons of the game would be sluggish.

In this guide, we will be talking about ways on how to earn money fast in Coral Island.

There’s a lot of things that you can do within Coral Island that can earn you money, and it’s not just limited to working in the farm. But to make this guide simple, we are going to categorize the earning methods under these:

Farming will still be the main income source for the game, while mining and diving serve more as a supplement that can improve earnings from farming.

We’ll start off with farming, but since this activity is pretty much the staple in most farming sims, we’ll just brush through the basics and focus on the important stuff.

Planting seasonal crops, harvesting them, and then selling them is the most basic way to earn in Coral Island. Like an incremental game, you start off by planting a few crops, then selling them for a profit, and then using the money you earn to plant more crops. This cycle goes on ad infinitum or until you get tired of doing so.

They key thing to take note about farming is that the game implements a crop quality mechanics, wherein the quality of the harvest will depend on how much care you give them via fertilizers and other upgrades. The higher the quality of the crop is, the more money it can fetch when it’s sold. There are 5 levels of quality a crop can have upon harvest.

Fertilizers, at least the starting ones, do not guarantee a high quality yield every time. But since the quality of the crop is determined upon harvest and no earlier than that, you can actually cheese this system by harvesting the crops, and then reloading your save if you think the quality of the harvest is not that good. You can keep doing this until you’re satisfied with the quality. This is only recommended for small to medium sized farms as diminishing returns will start coming into play the larger the farm grows.

Level up your Farming skill to levels 1 and 2 quickly so that you can get access to the Fertilizer I and Compost bin, respectively.

Catching bugs and fishes are not technically included under the farming activity, but there is a certain aspect in these two activities that will help increase the earnings through farming, and that is through the Museum.

Donating bugs and fishes to the Museum is one way of increasing the island’s rating. During the first few days of a playthrough, you’ll learn that the island’s rating has gone down to F. By filling up the Museum’s collection, you are also helping the island to raise its rating slowly. Around your 20th donation, the rating should be up to E, which you can check by going into the far end of the Community Center.

Once the island rating is at E, go and visit the General Store and you’ll be rewarded with new kinds of seeds that you can plant in your farm, including those that can be harvested from multiple times within a season. Some of these plants, like the Cucumber, are also needed to bribe the Sea Turtles that are blocking some paths in the sea during a diving expedition.

Once you’re ready, you can start taking care of animals to add more sources of income to the farm. Just make sure that you are also well prepared for the additional costs of maintaining animals as they do require to be fed daily. This would not be a problem in the later stages of the game once you have unlocked Giants to help in the farm, but it can get overwhelming at the start.

Artisan Products is simply the umbrella term for any product that has been created from raw materials. Some examples of these are jams, wines, cheese, and even honey (as it’s “made” from flowers). Creating these products will reward a higher profit margin than just selling the raw products, though it usually costs time to make and you’ll need special equipment to do so. Despite that, this can become a very lucrative way of gaining income.

It’s recommended to start creating artisan products as soon as possible and once your farm is producing enough crops; doing it too early with a low yield of crops will result in days where you won’t have any crops to sell because they’re all being processed. It is also recommended to stock up on high-valued crops once you’re producing a surplus of them since they do not rot away and they can act as a buffer stock to keep your equipment busy throughout seasons.

Listed below are the recommended equipment to unlock as soon as possible, and their level requirements:

As for mining, the main purpose of heading down into the mines is mostly for gathering ores to craft advanced equipment used for artisan crafting and for upgrading tools. You will eventually pick up several Earth Geodes that you can have processed by the blacksmiths to reveal gems inside. Before selling these gems, make sure to donate ones that the Museum don’t have samples of yet. Any excess gems after that can be sold for additional money.

Similar to mining, the main purpose of heading down into the sea is to gather materials such as the Bronze and Silver Kelp as these help in improving the production of your farm. For example, Bronze Kelp can be processed through the Extractor to create Bronze Kelp Essence, a higher level material used for unlocking upgrades that improve the quality rates of crops. These upgrades can be unlocked via the Lab.

Another source of income through diving is by cleaning the trash and getting chance drops of chests that may contain valuable artifacts. These artifacts can also help fill up the Museum collection and the duplicates can be sold for money.

Check out this video by Play with Josh showing some tips that beginners could use in Coral Island: