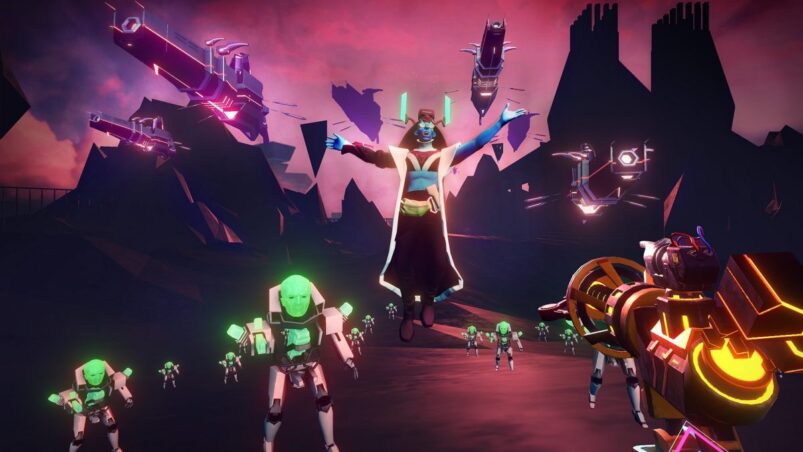 Thanks to the wonders of VR, wave shooters seem to have seen a bit of a renaissance of late. With the relatively static position of the player and bullets now literally whizzing past your head, the genre which went out of vogue with the light gun is back with a bang. Blasters of the Universe is easily one of the best VR wave shooters I have played on the PSVR to date.

Blasters of the Universe originally came out on PC back in 2016 and has finally made its way to PSVR and I have to say it’s been worth the wait. Blasters of the Universe places players in rich, colorful faux-retro worlds, forcing them to dodge, dip, duck, dive, and dodge thousands of bullets. Set inside an arcade cabinet ruled by the bastard child of Nelson Muntz and Biff Tannen that will stop at nothing to destroy you. Players are tasked with fending off hordes of robots and monsters armed only with a shield and a ruddy big gun.

Blasters of the Universe gives players a whole host of options for cutting the buggers down thanks to an in-depth crafting system which allows you to customize every part of your gun from the barrel to the type of ammunition it fires. There’s also a variety of shields to try out; massive shields with slow recharge rates, shields you can place in front of you, and my personal favorite, one that can deflect incoming fire back at enemies.

The level of personalization and ability to tinker with your load-out to your heart’s content is arguably Blasters of the Universe’s best feature. I found myself spending just as long tweaking with my load-out as I did try to push back the tide of enemies like a laser gun toting King Canute.

To call Blasters of the Universe hectic feels like an understatement. Though only your head can take damage, hundreds of bullets can be flying toward your bonce at any time, so you need to duck, dodge and weave and hide behind your shield. Although the first world breaks players in fairly gently, Blasters of the Universe soon ups the ante and you’re ducking, diving, stumbling into furniture and accidentally kicking the cat (just me?).

Rather than a simple shooter, developer Secret Location has created a difficult bullet hell that rarely lets up. There’s a good variety of foes to fire at, from bumbling bots to skittish birds exploding turtle things, weird floating heads and everything in between. Each type of foe (and there are quite a few) has a set attack pattern and it’s up to you to successfully figure them out and get out of the way at the right time. It takes a little while to get into it but once you do it’s a hell of a lot of fun and knocking away a wave of bullets with your shield, sidestepping some more like a pound shop Neo and then gunning down another wave of assailants never fails to make you feel like a bad ass – a sweaty, wheezing, seriously out of shape badass. (ok, just me again?)

However, some may be disappointed to find that each stage has set enemy placements but it’s tricky enough to get to the end of each level when you know what’s in store. But ultimately, Blasters of the Universe, manages to strike a fine balance between bullet hell and wave shooters.

If you are feeling a little sadistic though there’s an Endless Mode complete with leaderboards that tosses random enemies at you until your inevitable death. 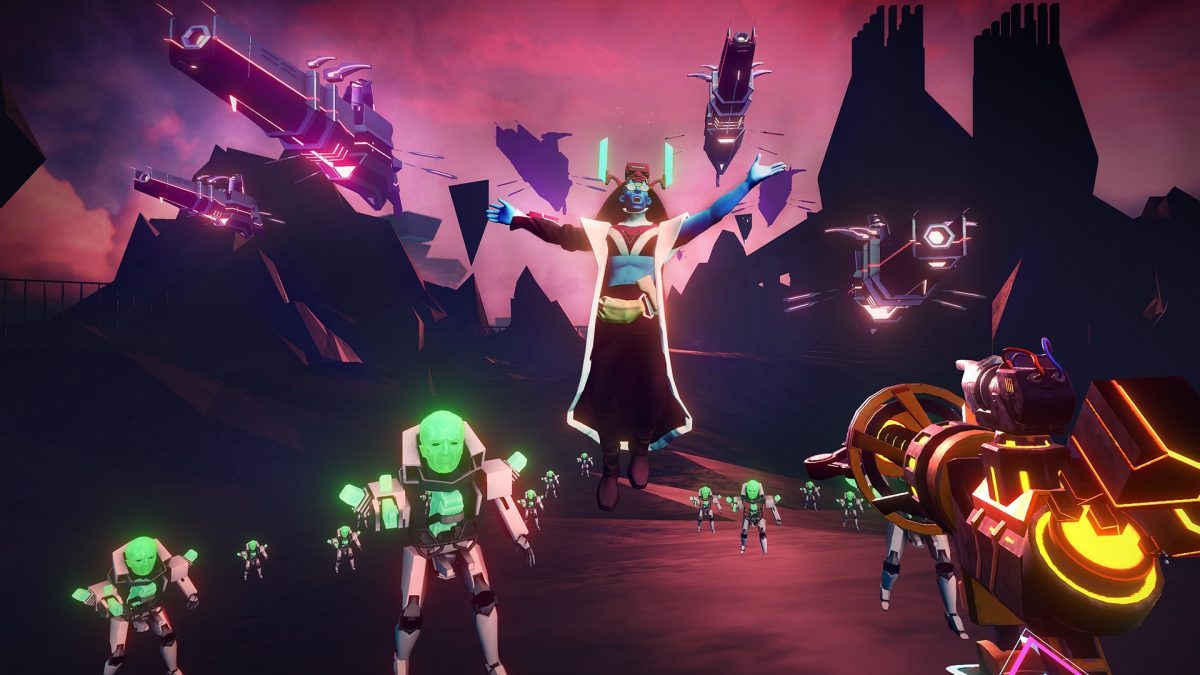 Blasters of the Universe - Review
Score Definition
When the issues of a game are few and stomped on by its greatness.
Pros
Frantic fun combat
Great sense of humour
Deep customisation system
Cons
Pace can feel overwhelming at times
The aches after playing for a couple of hours
8.9
Great