Whenever two games crossover each other, there’s always a lot of potential fun to be had. Imagine having four different titles mashing together in a single fighting game. Well, that’s exactly what BlazBlue: Cross Tag Battle offers!

With this latest installment of BlazBlue, you get characters from RWBY, Under Night In-Birth, and Persona 4 all fighting against each other in duos.

However, even with so many different characters laying eyes on each other for the first time, it doesn’t necessarily mean that the game is good, right?

Well, hear out what I have to say and decide for yourself!

This is where I feel the game comes up short.

Previous Blazblue installments always had this interesting yet confusing story to tell us. In Cross Tag Battle, I was barely interested. The story honestly felt like a tinfoil excuse to mash the characters together in one big battle royal of two-on-two.

To sum it all up, characters from all respective universes are all transported to one plane of existence made by some mysterious entity who tells them they all need to fight each other.

Character interactions are really less than impressive. They feel rushed. Every interaction really just follows one particular formula: they meet, talk a bit, and then fight. That’s it. No taking some time to truly get to know each other. Due to the setting of the BlazBlue: Cross Tag Battle, characters can’t really relax. They all just want to get it over with and get home. For a game whose main selling point is its crossover, it winds up being really disappointing.

The story is episodic. There’s about one fight per episode and you really start to expect it. A single episode in each of the four respective titles is equal to one brawl. 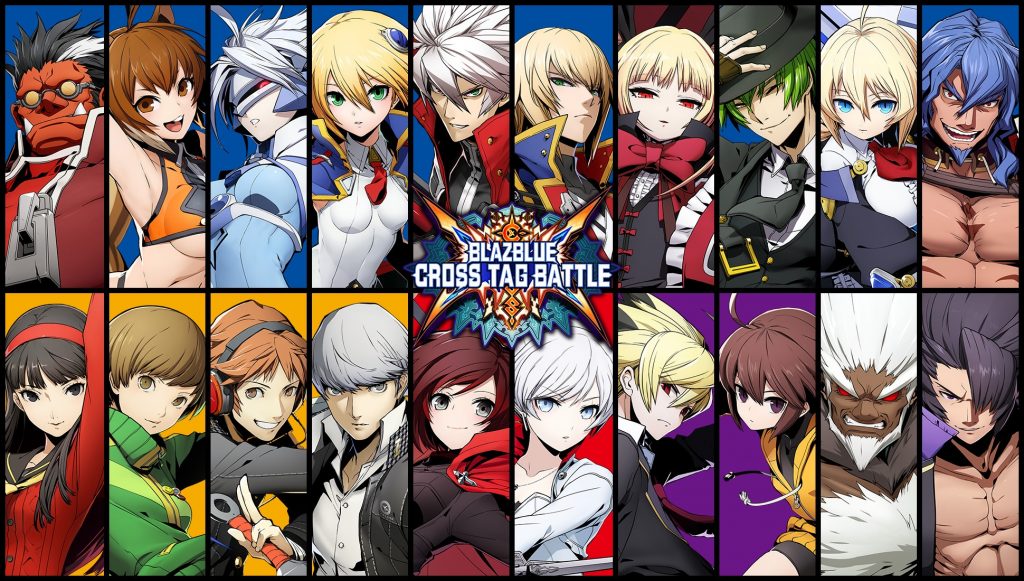 The game does a poor job (or doesn’t really do anything at all) to properly introduce each title and its characters to newcomers. Imaging not knowing what RWBY was and seeing the cast it had to offer. With the rushed interactions they have with each other, you generally won’t feel too interested to look into them. Characters acknowledge that they’re all from different worlds and are all different from each other, but never take the time to truly bond or develop any kind of chemistry.

As I was saying without actual knowledge on where these characters come from, you’re gonna wind up just confused and generally uninformed about what they do in their respective universes. You’re going to hear terms you’re not familiar with. If you have never played Persona 4 or any other Persona entry, you’re most likely not gonna know why teenagers can summon monsters to fight for them.

All this because characters don’t take the time to relax and talk to each other. Everyone just wants to go home and there’s nothing in between. This is disappointing because previous Blazblue installments had such a wealth of content when it came to character chemistry.

Though there are some genuinely funny moments and dialogue on this game, it really isn’t up to par with the likes of BlazBlue Chrono Phantasma.

For a fighting game, BlazBlue: Cross Tag is pretty solid.

Controls are fine and easy enough to learn and get used to. Bear in mind that Cross Tag Battle is a fast-paced fighting game even when compared to others of its own genre. You’re most likely going to see flashes and movements so fast that you can’t tell what exactly is going on at first.

For players who have played Blazblue before, they’ll still find some familiarity with the controls. However, it’s also been refitted to adjust for the two-on-two fighting matches.

Still, there’s a lot to be desired with the move-sets each character has. It’s much too short. While it is possible to chain them into combos, with some characters more complex than others, once you take a look at the Combo List in the pause menu, you’ll quickly see that there’s not much to learn. The main focus is really on timing the attacks right and setting up a combo against your opponents.

Playing alone can be really boring. Fights with AI opponents aren’t too compelling. That’s because the match goes on much too fast. Players will find that AI doesn’t really offer a fun time for them unless they’re practicing.

There’s also not that many modes in Cross Tag Battle. You get your Story Mode, Survival Mode, Versus Mode, and Training Mode. That’s it. There’s really not that much variety.

Despite there having 40 characters to choose from, half of Cross Tag Battle’s rooster is locked under DLC. In fact, many of Blazblue’s original cast are strangely absent and have no announcement whether or not they’ll even be included in the game. The practice of locking characters in a fighting game a downloadable content can come off as a sour note to many, including myself.

Especially more so when those DLC characters can be fought in story mode as enemies.

There’s a store in-game for you to be able to purchase things. Though they’re really just cosmetic. You can make purchases by currency earned in game. Unfortunately aside from a few color palettes (such as making Ruby Rose look like her mother and Terumi Hazama into the freaking Joker) there’s really nothing in the store worth saving up for.

BlazBlue has always been known for going for a more anime style and has managed some visually impressive displays in its fighting arena.

For a game that has such a huge roster of characters, the art style is lacking. Characters in the main story mode all have one expression on display. This goes against previous works of BlazBlue when characters could change their body posture based on what was happening. In what really added some life to the game is now absent.

There is some unlockable art that you can get as you progress throughout the game but there’s not really that many. And not many of them are really interesting to look at.

The music is superb as always. Coming from all four different titles blended in together, Blazblue Cross Tag Battle does a very good job at remixing some of the music together to pump adrenaline into fighting.

It’s got a solid, fun to play battle system but clearly needed some attention on other areas as well. Story mode lacked content, the game needs more modes to have fun with, and characters should be more than just DLC cash grabs.

I didn’t like the fact that the game forces us to fight two-on-two. I much prefer being able to select an option on how many characters I want to play with. I didn’t like the three vs three system in Dragon Ball FighterZ and I sure don’t like it here either. It’d be better if they gave us the option to choose one-on-one.

Only including color palettes to customize characters didn’t feel too fresh. Adding in some alternate costumes would’ve made saving up in-game currency well worth it.

I did like BlazBlue: Cross Tag Battle, however. But I just don’t feel as though it carries the charm previous Blazblue installments had. This entry into the franchise honestly just feels lazy in plenty of ways. It feels as though Arc System Works put too much priority on making money than actually adding some depth into the story of their game.

If you don’t know RWBY, Under Night In-Birth, or Persona 4 then it’s better not to get this game at all.

BlazBlue: Cross Tag Battle - Review
Score Definition
You better have to choose if it’s worth spending your spare cash, because it might not be the game for you and it might be for others.
Pros
Good fighting system
Kickass music
Good characters
Cons
Generic story
Half the characters as DLC
Forced two-on-two
6.5
Justified