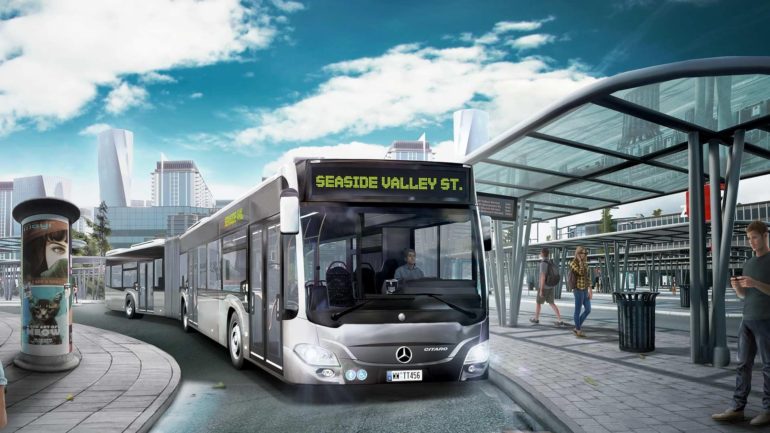 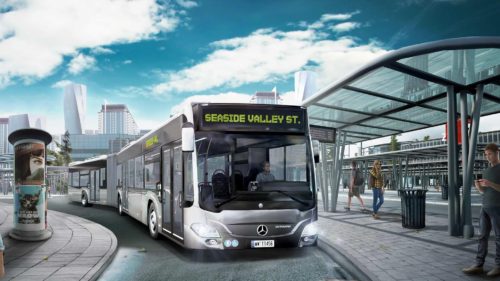 Ever wondered what is it like to drive a bus? Now is your chance to try Bus Simulator out, in the safety of your couch at least! Just as the title holds you will be in command of a bus driving around a huge city. The ultimate goal is to unlock as many buses as you can, make lots of profit, complete objectives and gain experience.

Hearing some of the goals might be daunting but it isn’t that bad. There is no rush in completing the goals and earning profit is not that difficult. The buses that you drive around are licensed, which means they are authentic and can be seen in the real world. It amazes me how intricate the cockpits are and at first, it may look complicated but thank goodness there is a radial menu. The radial menu is like a shortcut wheel for all the buttons present on the cockpit. Meaning you don’t have to zoom in at the cockpit all the time if you need your indicators or if you need to do a reverse. The interior of the bus is so beautiful and it really looked genuine. It really feels like I am inside a bus and driving it.

If you don’t know how to drive, it really won’t matter in this game. Ignition and moving forward is just a button away. Bus brakes and a full stop is the same thing too. I drive in reality but I still had some difficulty in driving these enormous public vehicles. The more expensive the bus is, the longer and bigger they get. Those quick turns are really a headache and they still are. You think you are now comfortable maneuvering this whale? Poof! You collided with another vehicle. It was such a strange feeling following the Real World rules in a simulated game, especially when you live in the Philippines. Traffic rules here are different on the western side of the globe but I was able to manage – barely.

Running on red lights, speeding and colliding with vehicles and poles makes you lose money and you need that money to pay bus maintenance, driver wages and to buy bigger buses. A major NO-NO is to hit pedestrians. That shit cost £20,000.00 and on average you can only profit £15,000 on a Setra with 49 capacity seats. That day will be a major loss for you and I suggest you just abort that drive and start a new one. Gaining experience points is also a different feat because this is drawn from the experience of the passengers which is really neat. That is never the case here in the Philippines, so I really appreciate that. Reaching bus stops on time and parking them perfectly gains you points while hitting on speed bumps, potholes and reaching a bus stop late diminishes it.

I always have to remind myself that I wasn’t playing a Need for Speed game since I like to cut corners and definitely that doesn’t do well on an Iveco since it’s a long bus and you will have to end up doing a lot of collision damage and reaching the next stop late. Not a good profit day seeing all that deduction. After a few drives, I got to relax and figured it out on when to use bus breaks and do those quick turns without damage. I got really proud of myself after a few tries, it really tested my patience though. But it was a great achievement. It’s a hard job driving buses and I have now realized the hard work these drivers put into driving them.

It would’ve been a great experience driving nonstop if buggy technical components were not dominating on this game. What majorly irked me are the visual buttons not doing what they are supposed to. When I was using the Ticketing Machine, I needed to hand out a change to a passenger and on the screen, it says O Select and X Back. Highlighting the appropriate amount, pressed on O and nothing happened! It took so long that I had to Google whatever the fuck I’m doing because I am just stuck on that phase. Nothing useful came up so I pressed all the button and voila! It worked when I pressed the X button. Major facepalm! This also happens when I hire drivers to take over some routes. Supposedly, X Back and O Hire/Fire but then again when you press the O button, nothing happens but it’s actually the X button that triggers the hire/fire command and also does the Back command. Whenever I hire a driver, I have to hire an extra one. So I can fire the extra driver and can now go back to the menu screen. Tedious at best!

With the craziness of the buttons, sometimes I start on a trip accidentally and there are actually a few route options that you can customize. You can have a reverse route, loop route or a round trip (coined as Ping Pong) or free roam. You can see this on the startup screen just before you start to drive but when you are on the actual drive, you will be unable to see what you marked. At times, you would like to review if you did tick off the Reverse route and there is nothing there to help you confirm. At the end of the route, it is also consistent that the passengers will leave trash but it’s really silly when the trash every time that they leave behind is a coffee cup but you don’t really see them bring one. There should be more variation when it comes to trashes, it could be wrappers of chocolates, junk food or water bottles.

Two options are available for camera angles when driving, First-person where you will be inside the cockpit or a Third person view, where you can see a whole lot of the bus and a 360 ° turn. The latter is better when driving since side mirrors are unclear in First-person mode. The first-person camera is better used in catching fare dodgers, communicating to passengers who are blocking the doors or listening to music loudly. Frame rate is a problem as well as it drops oftentimes which makes the drive look unrealistic. It’s a pain to see frames freezing and it makes the drive more exhausting. The game also lacks information that is helpful in the success of the players. In Route settings, it will be very helpful if there is a simple description between Loop or Ping Pong. I mean, what’s the difference? On an actual trip, besides the GPS Map – there are icons that appear whenever you do something. Activate speed limiter, open the doors; but, there are some icons that I do not recognize and I don’t know where to get their reference or I just don’t know where to look. It might seem simple but details are important for me.

A feature that I find surprising is that your character can freely get out of the bus and explore the area. You can go as far away as you want but eventually, you will have to come back to your bus because you can’t end the day without it. The devs could add more depth to that area as you can only walk around and admire the scenic views. You will be unable to interact with any of the people there nor interact with the buildings. Maybe adding more feature like your driver can get a cup of Joe or grab a magazine to relax a bit could be a fun addition. One of the crazy things that happened lately was the game crashed with error CE 34878-0 and it was a real bummer since I was completing a long drive and I almost finished it too. I have no choice but to do it all over again.

Sometimes accidents happen and it wasn’t my fault! I find it awesome when a vehicle gives way to me when I use my indicator but the reality is, there are a few drivers that are assholes. While I was doing a right turn on an intersection, this truck on the other side still went forward and hit me on the side. But still I got penalized for it. Why do I have to shoulder that? I did my job, I had my right indicator on, was very slow in doing that turn. But somehow, it was still my fault. Geez! Those pedestrians, although bots, are really dumb AF. Still the same scenario, I was doing a quick left this time and I was doing it really slow too. This pedestrian came out of nowhere and the middle of my body was at the pedestrian lane. I moved forward to avoid that pedestrian but still, she still walked head-on the bus and hit herself. Of course, it was my fault again and got punished hard for it.

Someone who likes slow-paced gems, patience that can be stretched and willing to do routine stuff may enjoy this game more than others. Gamers that are already drivers in the real world and loves long drives, this might be it for you. It’s really casual and interacting with the Cashier interface is quite the charm. That machine is so efficient, I just wish it was present here in the Philippines. Albeit jeepney drivers can take advantage of that as well. I loved how the weather system has flawless execution, my favorite is the rainy weather as the sound effects are on point. Weather doesn’t affect tire-road contact nor passenger availability. It’s also a nice touch when you get to hear your passenger gossip about someone or when they talk about their favorite TV Series. It’s also great when they talk about the weather that they are at. I also liked it when there are random events that happen on a drive. Like a bus stop might be under repair so you’ll have to skip that. A passenger is listening to music loudly, so you have to stop them. That day might be a holiday so there are more passengers that day. These surprises are quite fun.

Simulated games open our minds to different real-based scenarios. Scenarios that may not be possible in our current lifetime. I love this idea for Bus Simulator, to be able to see another perspective and I will say it again, I did enjoy those drives but the faulty mechanics just gives it a major setback. Definitely there could be an improvement especially future patches may fix the button and the crashing issue.