Most of us has dreamed of piloting a spaceship at one point in our lives. In this game, you can command a whole fleet of spaceships.

Ceres is a strategic space combat game wherein you play as a space-farer trying to survive in the harsh emptiness of space with nothing but your spaceship and your crew. Ceres was developed by indie company Jötunn Games and just recently got released in Steam. The game takes place in the far future where space travel is a norm and humanity started to venture into the other parts of the universe. A catastrophic accident happened when one of the gates used for traveling opened near a dying star which wiped out most of the things on the other side of it, including Earth. Then on one fateful day (or night, it’s space, it doesn’t matter), your ship just suddenly got overridden by some sort of an alien A.I. called Ceres and leads you to a quest to search for the other A.I.s across the galaxy. 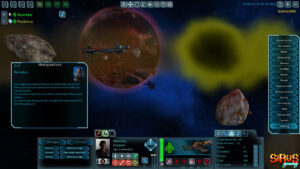 Players have to navigate their way through the massive expanse of space, trying to accomplish several missions along the way while trying to decide whether the next ship you meet on the way would be a friend or a foe. Ships can gather resources from asteroids and other space junk in which they can use for currency or for upgrades. Some human colonies have gone into a warring state and became territorial, something players must be wary of when wandering in space. Others have chosen the life of piracy and victimize unsuspecting ships for loot. Ships can be upgraded with more firepower and defense to make skirmishes less of a problem.

Tactics come into play when your ships are engaged in battle with enemy ships. Although everything happens on the same map in real time, there is an option to pause the game and plan your next move. Since the playing field is an open map, there’s the whole three dimensions to work with. Different tactics can be put into play depending on the enemy.

Gameplay wise, Ceres has quite a steep learning curve. Those who dive in directly into the campaign would definitely turn back and go to the tutorial first. The tutorial is quite helpful but not as easy to deal with. One of the main causes of frustration in the game would be the movement and navigation of the ship. It is not as intuitive as it seems and since players are dealing with an open map, it is quite tricky to zero in on a targeted point in space. Plus the UI takes a bit of time to get used but it does not crowd the screen.

One good point about Ceres is that the graphics isn’t as taxing to the GPU but it isn’t as notable either. The models used for the ships are good enough except for the fact the the add-on weapons do really stand out from the rest of the ship. The visuals look like Ceres is a game that was made in the early 2000’s with a pixel-y texture to its elements. The background sounds are nothing more than the hum of your ship’s engine and thrusters. The dialogues are dubbed and having voice actors in a game is always a plus point but there are still times in the recordings that background noise can still be heard.

Overall, Ceres seems to be a promising space adventure game with a bit of simulation game feel to it with all the micromanagement of your ship and your fleet but it still seems to be far from being great enough to actually catch the mainstream audience’s attention. Bugs still come out in the game once in a while although updates and patches are being released regularly. It feels like a few more features should be added in-game to shift the player’s interest more into the playing aspect than into the managing aspect like for example, an anti-collision feature with friendlies and smart course-plotting system to address the problem with the navigation and such. Ceres might not be able to accommodate the casual gamer but it is recommended for those who are into the space warfare and space survival genres.

Ceres is a promising space warfare game but it still has a large room for improvement as it lacks a few more features that would make the gaming experience a little bit better.

Ceres is available on Steam for PC and Mac.

This review is based off a copy provided by the developer.