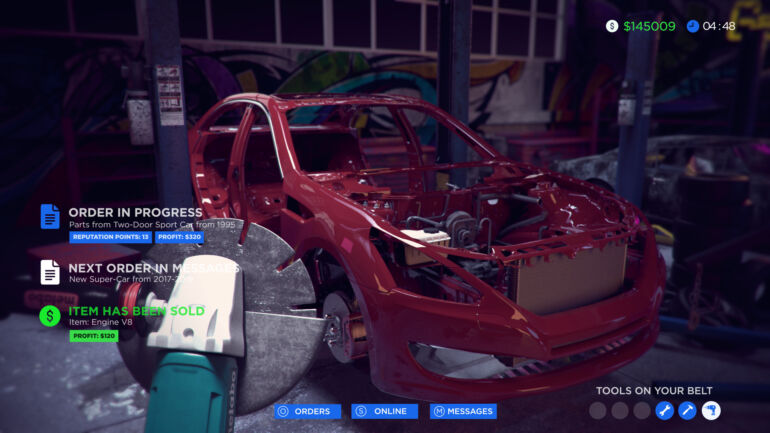 The illegal underground business simulator will be released on PC via Steam. The official release date is still unknown, but the publisher promises that it will be soon.

Players in this game will be running an illegal business, which is their own illegal car chop chop of stolen cars. Make a fortune on parts sales and raise reputation among dangerous urban gangs.

The game will begin when players visit the city to find the right car. They will have to strategize in order to get it without risking the chance of getting busted. Assemble a trained team and pick up the valuable loot by transporting it to their hideout without getting busted.

Players have the choice to disassemble the whole car or just legalize the whole thing. It is up to them which one is the more cost-effective solution. The game mechanics allow them to make precise disassembly of the car, which makes them able to separate each part and set an appropriate price for it on the internet exchange. The risk of getting found out will decrease unless they prefer to risk restamping the license plates, painting, or removing GPS transmitters.

“Automotive simulators are a category that we have had in our DNA since the beginning of the Company’s activity. We hope that PC gamers will appreciate our commitment to this type of production as much as they did in the mobile market” – comments Damian Fijałkowski, Co-Founder and President of the Board of T-Bull S.A.

Missions will differ with regard to the course of action, difficulty level, execution time, and escape time. Each task will affect the player’s reputation, police interest, and cash flow.

In order for the business to become more and more profitable, as a boss, the player will have to be extremely clever – after all, “borrowing” someone else’s car is not the easiest nut to crack. The economic sense is also important. These aspects will play a key role in building an underground empire.

FEATURES:
• Be the head of the operation, thanks to an extensive car theft system
• A large city with different locations
• Realistic and extensive disassembly system for parts of every stolen car
• Sophisticated mechanics of car parts’ legalization
• The illegal atmosphere of the game
• Vast internet marketplace
• Reputation system