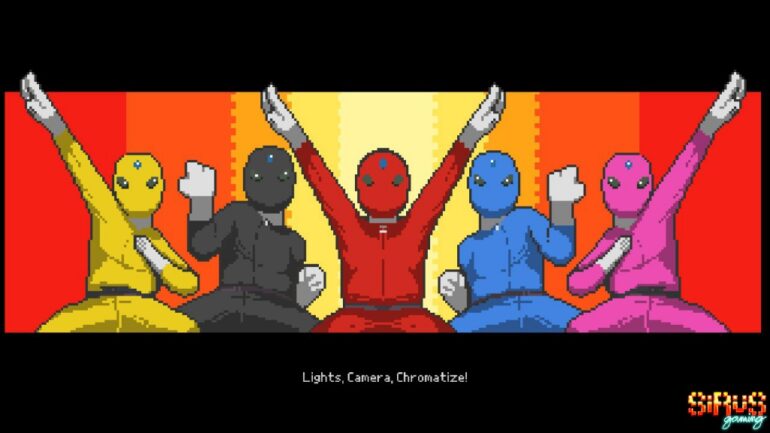 Chroma Squad is a tactical turn-based RPG and simulation game created by the good guys at Behold Studios about stuntmen in colorful spandex fighting the forces of evil. Based on the Japanese media of live action shows or tokusatsu, Chroma Squad panders to the young and young-at-heart fans of the Super Sentai superhero genre or more popularly known in the west as the Power Rangers. Chroma Squad started as a Kickstarter project back in 2013, almost two years ago, and reached its goal just within a month. Its release got delayed for months following a dispute they had with the lawyers of Saban, owner of the rights of the Power Rangers franchise, when the larger company pointed out that the indie group were infringing the copyrights of the franchise. After settling the issue with a title tagline, the long wait is finally over for fans as the highly anticipated game makes its official release today.

Chroma Squad follows the story of a band of superhero stuntmen who quit their former studio because of their dictator director and decided to create their own production studio. Starting with what little funds they have left and wit the help of an old stage prop of a severed brain inside a glass tank called Cerebro, the goal is to establish a self-supporting production studio and aim to be the most popular production studio in the land. That and to be successful enough just to spite the stuntmen’s former boss.

Players get to lead their own group of spandex-clad, color-coordinated superheroes and manage the direction and the production of their own superhero show. Missions are patterned as episodes in which your heroes need to beat up the bad guys, just like what usually transpires in a regular Super Sentai or Power Ranger episode. There are director’s instructions which serve as mission objectives that will help boost up the viewer ratings when met. The success of an episode is gauged by it ratings or the number of viewers it gets after completing it. This rating would then be converted into cash which you could use to buy better props and set paraphernalia. Fans can also be gained (or lost) every episode which you could use to to further strengthen your marketing schemes which, in turn, would get you more fans.

Fights play out in a turn-based fashion in which you can command your characters on a grid-laden battlefield. Attacks can be done when your unit is adjacent to an enemy unit or it an enemy is within the attacking range. Certain combination attacks can be performed when one or more of your units enter the teamwork mode. While in teamwork mode, your units can also perform their special finishing attack to could deal massive damage  to their target. Of course, a finishing attack wouldn’t be a finishing attack if it wouldn’t be done to finish off an enemy boss so it’s usually done towards the end of a mission, though players aren’t limited to performing just a single finishing attack per fight. And there are giant mecha and kaiju fights, too, because it wouldn’t be complete without gigantic beings fighting within the metropolis and the mountains.

Chroma Squad’s soundtrack is just a really good tribute to the opening themes and background tracks of the classic Super Sentai shows. The pixelized graphics of Chroma Squad works perfectly well with the nostalgic feel that it’s trying to give out. It’s one of those games which proves that pixel graphics is still relevant in today’s era and is still not outdated when done properly. The nostalgia works hand-in-hand with its schtick of slipping in several jokes and references from the shows because a real tokusatsu veteran would easily spot, understand and recall from which show the reference came from. Even the not-so-seasoned fans of both the Super Sentai and Power Rangers shows would have a fun time spotting references because there are lots of them. Chroma Squad’s humor also touches on the literal behind-the-scenes action of the production aspect of a tokusatsu series. They even did a slight poke at the issue of  copyright infringement of the American adaptation.

Despite the delay, Chroma Squad still maintained its hype up until today. The devs did a good job of utilizing the delay to further improve the game. Some sources and even rumors say that there’s a possibility that the devs would expand the game to even include the Kamen Rider series. Looking at the issue it had undergone, I could say that it just made the fans love the game even more. Well, it really shows that the game was created out of passion because the devs themselves are big fans and they know where to hit their fellow fans to make them feel good. Backers and those who just purchased the game would really feel giddy while playing the game, especially the top backers who get to see themselves be part of the game with their own game characters. Toku fan or not, Chroma Squad is a 10/10 must play for me.