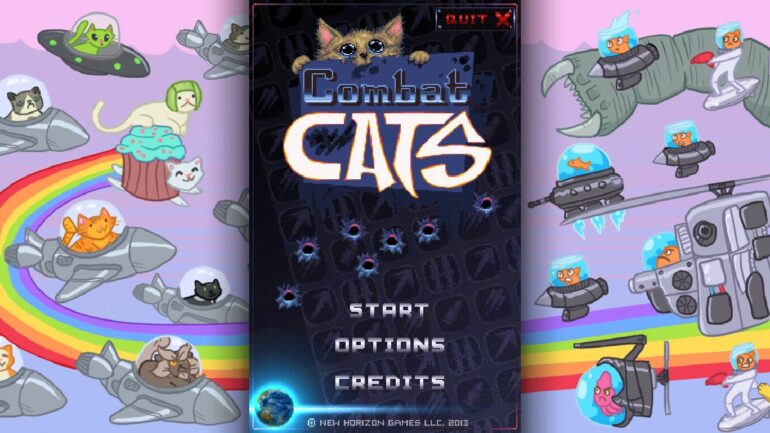 Developed by I-Game-Art and woodenchair, Combat Cats is a fun, fast-paced and somewhat retro-themed Action-Strategy RPG Puzzle game. Introducing Combat Cats is a quite humorous storyline and attractive colors and effects. If you’re a fan of a 16-bit theme, then Combats Cats may be the game for you!

Graphically, Combat Cats is fun and very nostalgic as it elevates in both modern and retro graphics. Although very simple, if you’re a 80’s or 90’s kid, or just out right love cats, then Combat Cats will most likely be very appreciated in your eyes. From the get-go, the introductory story gives you laughs and make you have a feel of nostalgia. When you do start the game, it is easy to get a hang of and master due to its simple puzzle-like gameplay and fast-paced action. I am giving Combat Cats a high rating for graphics, just because of nostalgia points and I didn’t experience any glitches or problems.

Although very exciting, most of the action is on the top part of the screen where the cat you are using to fight the fish enemies is battling it out. In other words, its puzzle-like gameplay has an intense and time rushed style so all the action that is happening is completely missed out. You don’t have any breaks or time to take a glance at the top of the screen to watch the entertaining action, unless you just don’t care about the level and don’t mind slowly matching up pairs to watch the battle. I’ve personally taken time after finishing the game to play again and watch the cool explosions and attacks from my favorite cat ship. 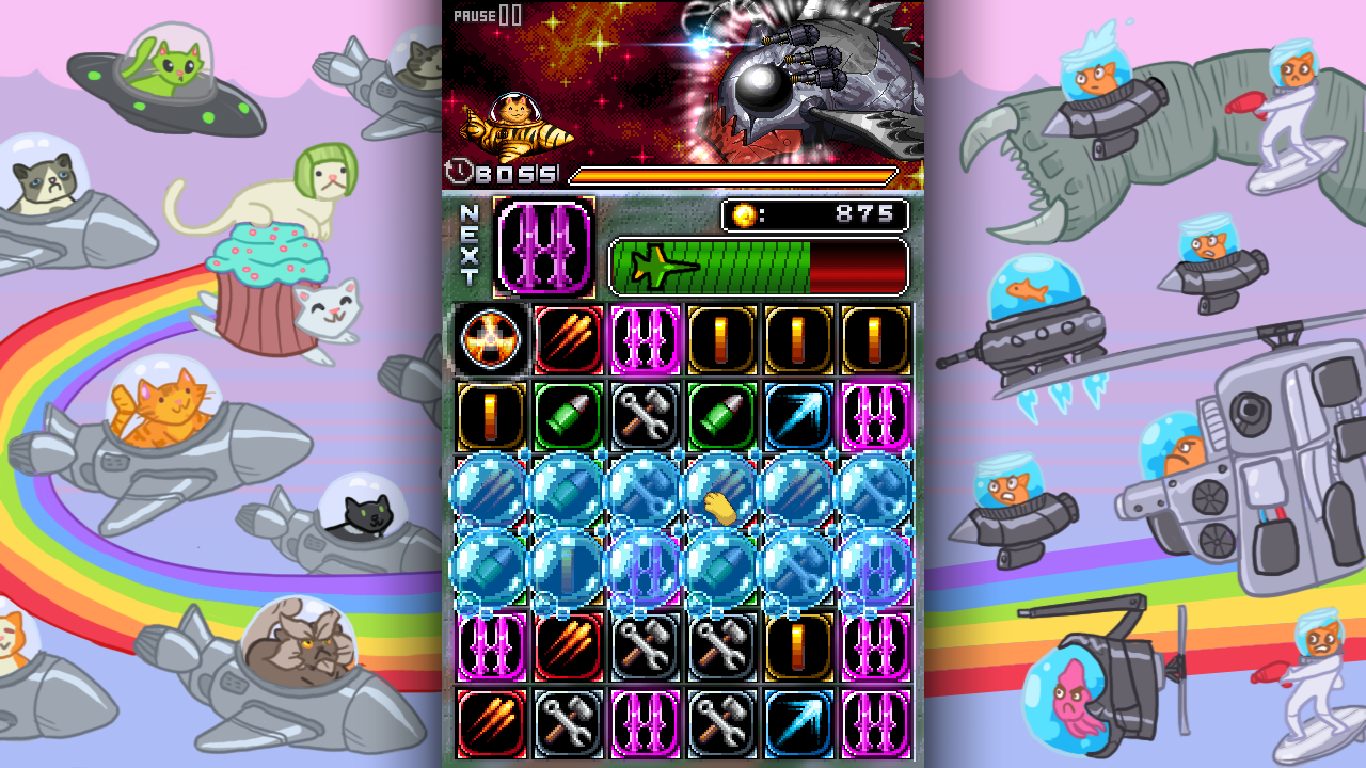 One of the best things you can do in Combat Cats is unlock all the upgrades and all the different cat ships as a collection and play survival, which unlocks after you complete the storyline. I do also love he background since the actual game screen only takes up about 1/3 of the whole screen while the background portrays the battle between cats and fish.

The sounds of Combat Cats are fun and exciting as well. The best part of all the sounds is the soundtrack or background music which is the ‘cherry on top’ of the whole retro theme. The music has simple notes that never get on your nerves and the sound effects throughout the game just feel so nostalgic. The sounds in Combat Cats are very charming and will definitely help you cozy on the couch and play this game for hours without being annoyed by all the sound effects.

Gameplay is especially simple and can sometimes be a challenge. Getting stuck for a while on a level isn’t impossible and every now and then you will break a sweat. As mentioned before, the action which would have been a lot fun to see more of is kind of obscure since your eyes are stuck on the puzzling of matching up weapons to attack. It almost seems as if the action which they have put on top of the puzzle field is completely useless since the only people who can really watch it happening are onlookers to you playing the game. Also, the map to conquer the enemy seems a tad bit too small and it is very possible to finish the whole gameplay story in just an hour or two if you’re really good. I was expecting and hoping that the end of the island connected to more levels since that is how the line connecting the levels showed it as. Other than these two elements, the gameplay is very fun, making you use your brain and strategic skills along with the quick ‘cat-like reflexes’ your hand needs to pair up with your hand-eye coordination. 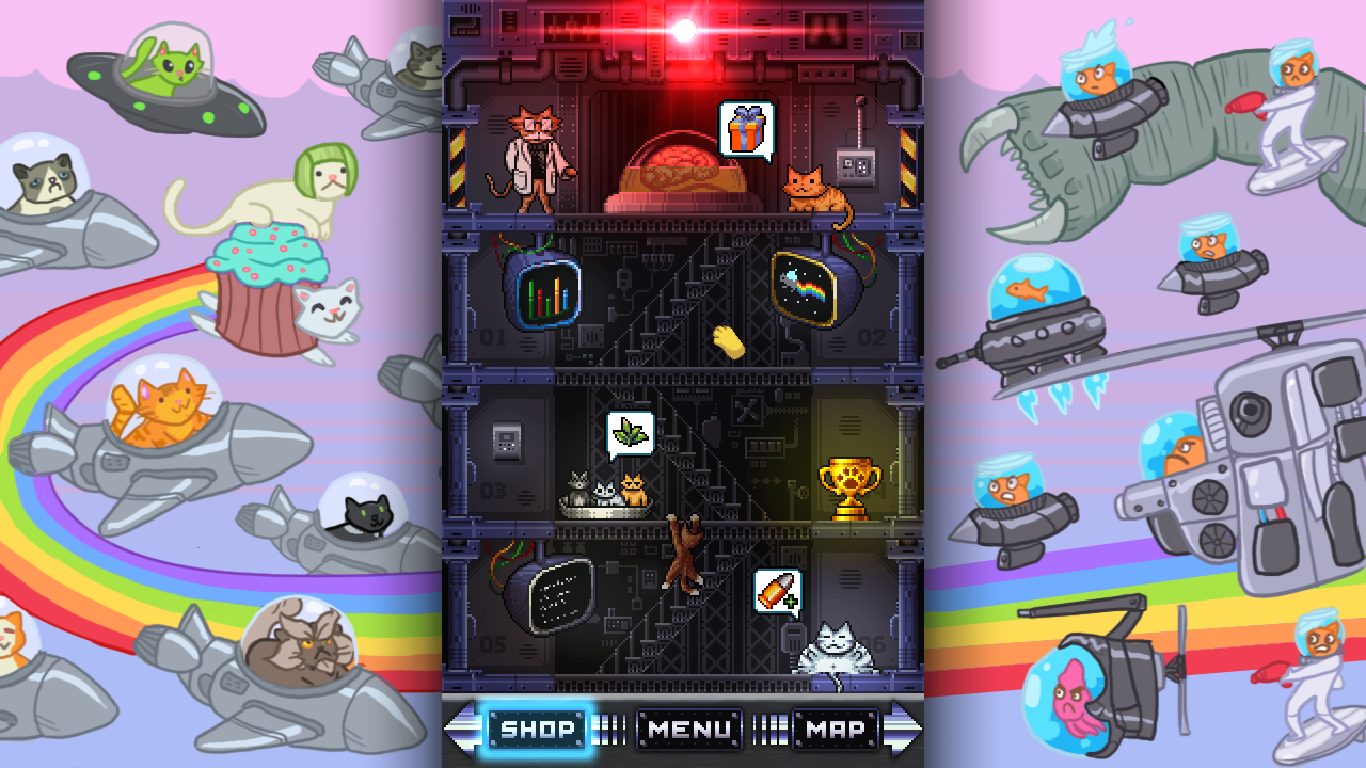 Combat Cats is one of the most charming ‘back to the past’ games I’ve played in a while that is actually modern at the same time. Even until now, I will continue to replay Combat Cats as a free-time game. For the replay value, I think it is alright although I suggest this game to a younger audience since they would probably enjoy it even more than an older audience.

All in all, Combat Cats is a very charming game that should be played by anyone. It is easily finished and the graphics, music and sounds teleport you to a whole different era where simplicity ruled. Playing Combat Cats will make a boring afternoon turn into a fun, relaxing day in a heartbeat. Personally, I highly suggest you play this game, it is definitely worth the price and even if you may get tired of it after a while, passing it down to a younger sibling or family member to play while you’re babysitting seems like a strategic plan to me. So get your space boots on and join the battle for cats against the fish that stole their beloved catnip.

Combat Cats is a fast-paced, retro-themed game that can be enjoyed by all ages and at all times because of its simplicity and all in all theme.

This review is based on a copy provided by I-Game-Art.