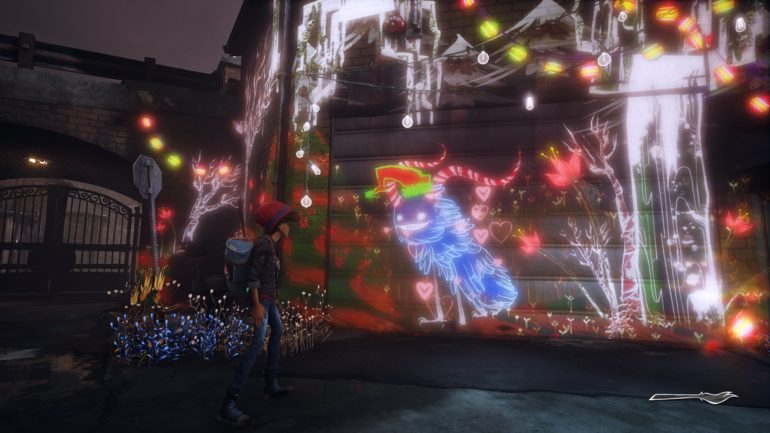 The free DLC for the game is the Holiday Brush Design Pack. It is a festive add-on that allows players to enjoy the holiday spirit by getting the tools to paint even more beautiful pieces in the game’s many modes. This pack will be included in the game’s 1.06 patch and was added to thank the fans for their love and support of the game. When the update downloads to the console, players will be asked if they want to activate the DLC.

At any time, players can active the Holiday Brush Design Pack from the menu, and use them in both existing saves and new games. The designs are reworks of the existing brushes but with the holiday theme. These designs include Santa hats, decorated trees, and other designs to get into the holiday spirit. To go back to the original brush just simply turn off the Holiday pack. The developers encourage their players to share their creations on social media and tag them on Twitter or Instagram platforms.

When we were making Concrete Genie, we knew that there may have been risk involved in making something with such a personal message, and with uniquely creative gameplay at its heart. It was such an overwhelming surprise to read all the great reviews and see such a wonderful heartfelt response from the PlayStation community. All of us here at Pixelopus are incredibly touched by the support, and particularly those who have reached out to say how much the themes in the game have moved them, or better still, helped them in some way. This was one of our greatest hopes when making the game.

We have also been thrilled to hear from families and gamers of all ages who have been enjoying Concrete Genie together. We designed the game and its story to appeal to all ages but, in particular, we hoped that families could benefit from the universal themes and creative gameplay. This has been so rewarding to watch! We hope that many more families over the holiday period (and beyond) continue to enjoy everything that Concrete Genie has to offer. Please continue to help us spread the word about this game, and what it is about. It has made such a difference so far and we are really grateful for the help!