This curse runs deeper than any ocean. Soon, she rises. 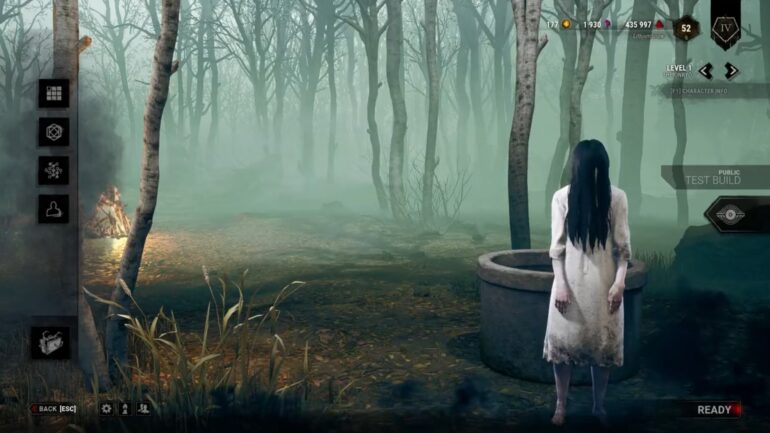 Finally, Dead By Daylight’s next major update has arrived on PTB, and it’s based on the critically-acclaimed horror film The Ring, with Chapter 23 Sadako Rising, and PTB for Ringu opening today, February 15, 2022.

Fans of Dead By Daylight have a lot to look forward to in 2022 as we all have seen how DBD’s popularity soar in recent months, and the developers have been constantly updating the game to keep us interested. If an important update is to be released in a major way, it must first be tested on the test servers to ensure that there are no bugs or other issues.

While the six-year celebration will take place later this year where players are speculating that characters like Pennywise from “IT” might make an appearance to commemorate the game’s sixth anniversary, in the meantime we are getting Sadako Yamamura, the Japanese horror girl, as the newest DBD Ringu Killer, The Onryō.

This new Chapter is based on Koji Suzuki’s novel Ringu and the original film version, Sadako Rising introduces two new characters: The Onryō, a killer, and Yoichi Asakawa, a survivor.

The Onryō, better known as Sadako Yamamura, is the new Killer in Dead by Daylight, and she is no stranger to horror genre. For Dead by Daylight Chapter 23: Sadako Rising, fans are ecstatic about the prospect of taking on the role of this new killer, and the following are all of her perks and abilities.

Sadako, who possessed incredible strength and a ferocious temper, was abandoned to a watery fate. Condemnation awaits anybody who watches the tape, which was created by her rage and manifested as the cursed videotape.

These are all the perks for the new Dead by Daylight killer The Onryō, a.k.a. Sadako Yamamura:

It’s no secret that Yoichi Asakawa is no stranger to Sadako’s rage, as The Onryō’s rage had a profound impact on his youth. Since then, his journey has taken him across dangerous seas and into an area of knowledge that he can only describe as “beyond rational comprehension.”

These are all the perks for the new Dead by Daylight survivor Yoichi Asakawa:

The leaked skins for DBD Chapter 23 Sadako Rising contain a new costume for new survivor Yoichi Asakawa, which will cost 1,080 Auric Cells and will be available for purchase in the DBD Store.

There will also be a legendary cosmetic item for the new killer Sadako Yamamura, which will be available for purchase for 1,485 Auric Cells.

More leaked outfits can be seen on the Tweet above and listed in the section below:

On March 8th, 2022, this terrifying new chapter will be unveiled to the public for the first time. If you haven’t seen the teaser trailer, you’re missing out on some truly horrifying moments.

Dead by Daylight Chapter 23: Sadako Rising, the latest DBD chapter developed by Behaviour Interactive, will be released on March 8, 2022, on PC, PlayStation 4, Xbox One, Nintendo Switch, and Google Stadia.

But the good news is that the Public Test Build is already live!

How to Play Dead By Daylight PTB – Player Test Build

Dead By Daylight keeps updating the game to keep it fresh for everyone. They test changes on the Player Test Build before releasing them live (PTB). This lets certain gamers try out the new features and give feedback to the devs. This allows the update to be fine-tuned before going live.

Currently, this feature is only available on PC via Steam, therefore console users cannot play the PTB. As long as the Public Test Build is live, it can be accessed by all Players who own the Game on Steam. This is how to play Dead By Daylight (DBD) PTB:

To Opt out of Dead By Daylight (DBD) PTB

These are the patch notes for 5.6.0 for the DBD Public Test Build on Chapter 23 Sadako Rising – Ringu:

Dev Note: The tracking system for Daily Rituals has been reworked, which requires all rituals to be reset with this patch.